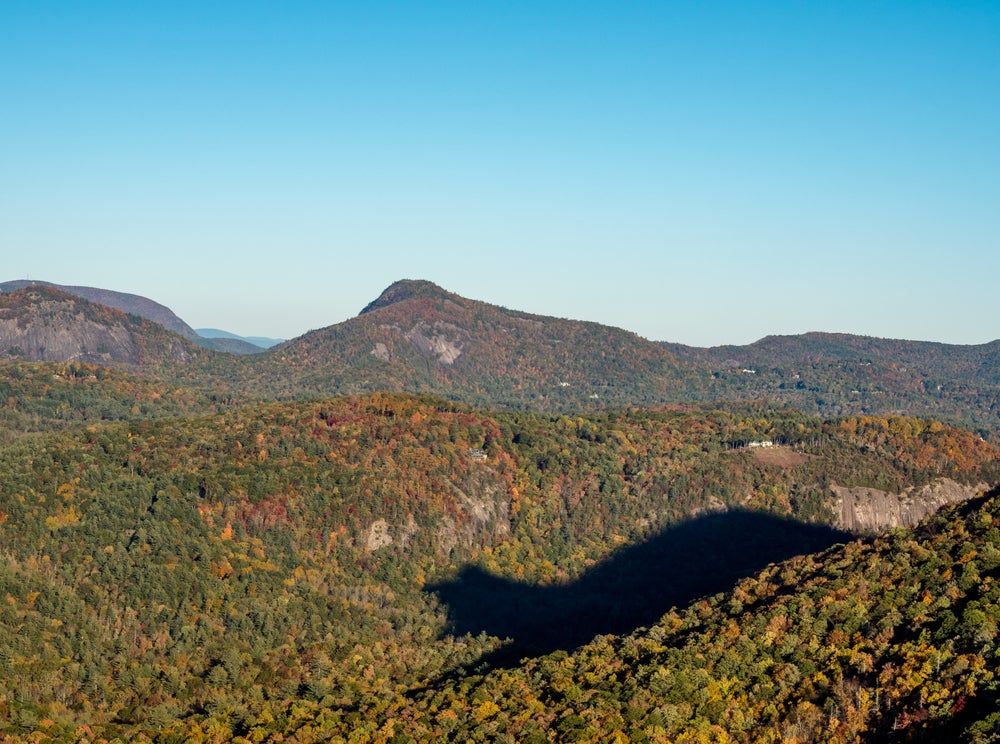 Every fall, travelers flock to see a bear emerge from the mountains of the Tar Heel State.

Visible for about three weeks every autumn — when the weather cooperates, of course — the somewhat elusive Shadow of the Bear appears in western North Carolina. As the sun sets, a small shadow grows from behind Whiteside Mountain, halfway between Cashiers and Highlands, North Carolina. Eventually, a giant bear shadow appears to stride across the entire valley.

“The black bear … seen often around western North Carolina is a symbol that resonates with people. For the black bear to make an appearance on the mountain itself just adds to the mystery and the intrigue,” Nick Breedlove, the executive director for the Jackson County Tourism Development Authority, told Travel + Leisure magazine.

Even if you aren't able to spot the Shadow of the Bear, you might still want to consider a trip to North Carolina this fall. The ever-popular city of Asheville -- often referred to as "The Paris of the South" -- is just 1.5 hours away. And regardless of where you stay, you'll have easy access to many of the state's best attractions and activities, including hiking trails, waterfalls, scenic roads and more.

When and where to see the Shadow of the Bear

The Shadow of the Bear is best viewed from the Rhodes Big View Scenic Overlook, off Route 64. From mid-October through early November, The Bear emerges around 5:30 p.m. The entire event lasts about 30 minutes. It's wise to arrive early because the overlook can get crowded. And be sure to check the weather when making plans, because rain and fog can obstruct your view.

If you're traveling from out of town, you'll want to fly into either Asheville Regional Airport (AVL) or Greenville-Spartanburg International Airport (GSP), the latter of which is in South Carolina. The city of Asheville is just over a 1.5-hour drive from the Rhodes Big View Overlook (where the Bear lives). From the Greenville-Spartanburg airport in Greer, you'll be looking at a 2-hour drive.

Related: From the Biltmore to hiking, finding family fun in Asheville

A number of airlines serve Asheville Regional, including American, Delta and United, along with low-cost-carriers Allegiant and Spirit. Round-trip saver economy awards within the US on United start at 20,000 miles this October, plus taxes and fees, but could be more or less depending on your departure city and travel dates. Similarly, American MilesSAAver awards for economy flights start at 25,000 round-trip, but we found round-trip flights with Delta from 12,000 miles in late October.

There aren't many options when it comes to chain hotels in Cashiers, North Carolina, but you could use Hilton points to stay at the Hampton Inn & Suites Cashiers-Sapphire Valley (from 40,000 Hilton points per night).

Otherwise, take a look online and you'll find various independent hotels, lodges and small inns, such as the highly-rated Park Inn and Old Edwards Inn & Spa. These hotels aren't part of any loyalty program, but you could use flexible rewards to help offset the cost of your stay. For example, you could earn Ultimate Rewards points with the Chase Sapphire Preferred Card and book your stay through the Chase Ultimate Rewards travel portal. Or, you could use Venture miles earned from the Capital One® Venture® Rewards Credit Card to "erase" the cost of your hotel.

Of course, prices can vary wildly depending on your travel dates and the length of your stay. That same Four Points can cost more than $400 per night during weekends in October.