Articles
Max Prosperi is a part-time frequent flyer and travel writer and full-time student. Based in St. Louis, Missouri, Max covers a variety of topics with a focus on points, miles, and aviation.
Follow
Oct. 24, 2018
•
3 min read 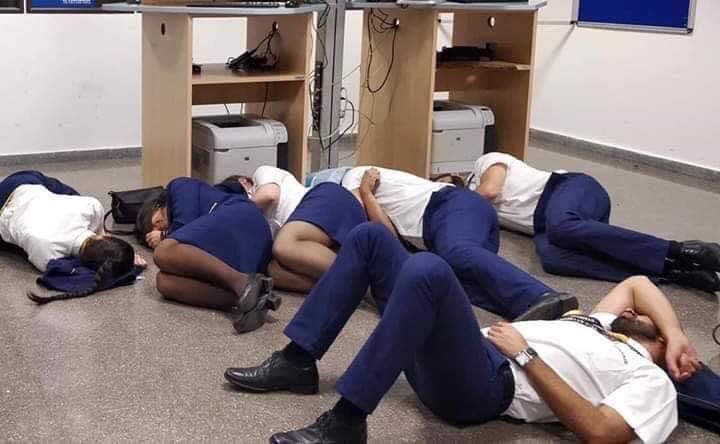 Ryanair Plans Disciplinary Actions for Staff Who Staged Sleeping Crew Photo
This post contains references to products from one or more of our advertisers. We may receive compensation when you click on links to those products. Terms apply to the offers listed on this page. For an explanation of our Advertising Policy, visit this page.

Last week, a photo posted to Twitter allegedly showed a Ryanair flight crew sleeping on the ground of Malaga International Airport (AGP) in Spain after thunderstorms canceled flights. The photo made rounds across social media, leading many to publicly condemn the Ireland-based airline. The crew depicted in the photo accused their employer of failing to find staff proper accommodations following the cancellation. Four days after the photo of the sleeping crew surfaced, Ryanair released CCTV footage allegedly showing the flight crew staging the photo. Now, Ryanair is reportedly pursuing disciplinary action against the crew.

Ryanair has summoned the Portuguese flight crew to appear at a disciplinary hearing at the airline's corporate headquarters in Ireland. Bloomberg has reported that a letter was sent to the crew that stated that they were "required to attend an investigative meeting under the disciplinary procedure." The letter went on to confirm the reason for the disciplinary hearing stating that it is to, "discuss the circumstances surrounding the distribution on social media of a photograph which faked events that occurred on Oct. 13."

Ryanair originally corroborated the crew's story that there were not any available hotel rooms in Malaga due to thunderstorms. The airline initially issued an apology after the photo surfaced on social media. However, CCTV footage quickly revealed that the incident was likely staged.

Recently, the Dublin-based ultra-low-cost carrier has been sparring with the various unions representing the airline's crews. The union that represents the flight crew summoned to the disciplinary hearing, SNPVAC, still backs the crew saying that the photo is an "accurate illustration."

Ryanair was forced to accept unionization among its crew and employees this past summer. The budget carrier has struggled to cope with strikes, walk-outs and demands for better contracts. One major tenant of Ryanair's business model has always been low operating costs. The airline fears that paying its crew members more or offering additional benefits could affect its business model. Keeping operating costs low is one of the most significant factors that allows Ryanair to offer fares starting at $13 USD.

Ryanair has not responded to requests made by the media over the letter summoning the crew. There has been no word to what disciplinary action might look like should the hearing prove the crew was attempting to vilify the airline and its management. This is just one of the major incidents that Ryanair faced this past week. In a separate event, video of an older white male aggressively berating a 77-year old woman of color on a Ryanair flight due to her ethnicity went viral and required Ryanair to issue a statement regarding the man's actions and the airline's poor response.