From PIGLT to KOBBB: The reason behind some of the world's most unusual waypoint names

Articles
Charlie Page is a senior first officer on the Boeing 787 Dreamliner with over 10,000 hours of flying experience, both around Europe on the A320 family and worldwide on the B787. He is also a freelance writer, contributing to a range of print and online publications.
March 20, 2021
•
9 min read 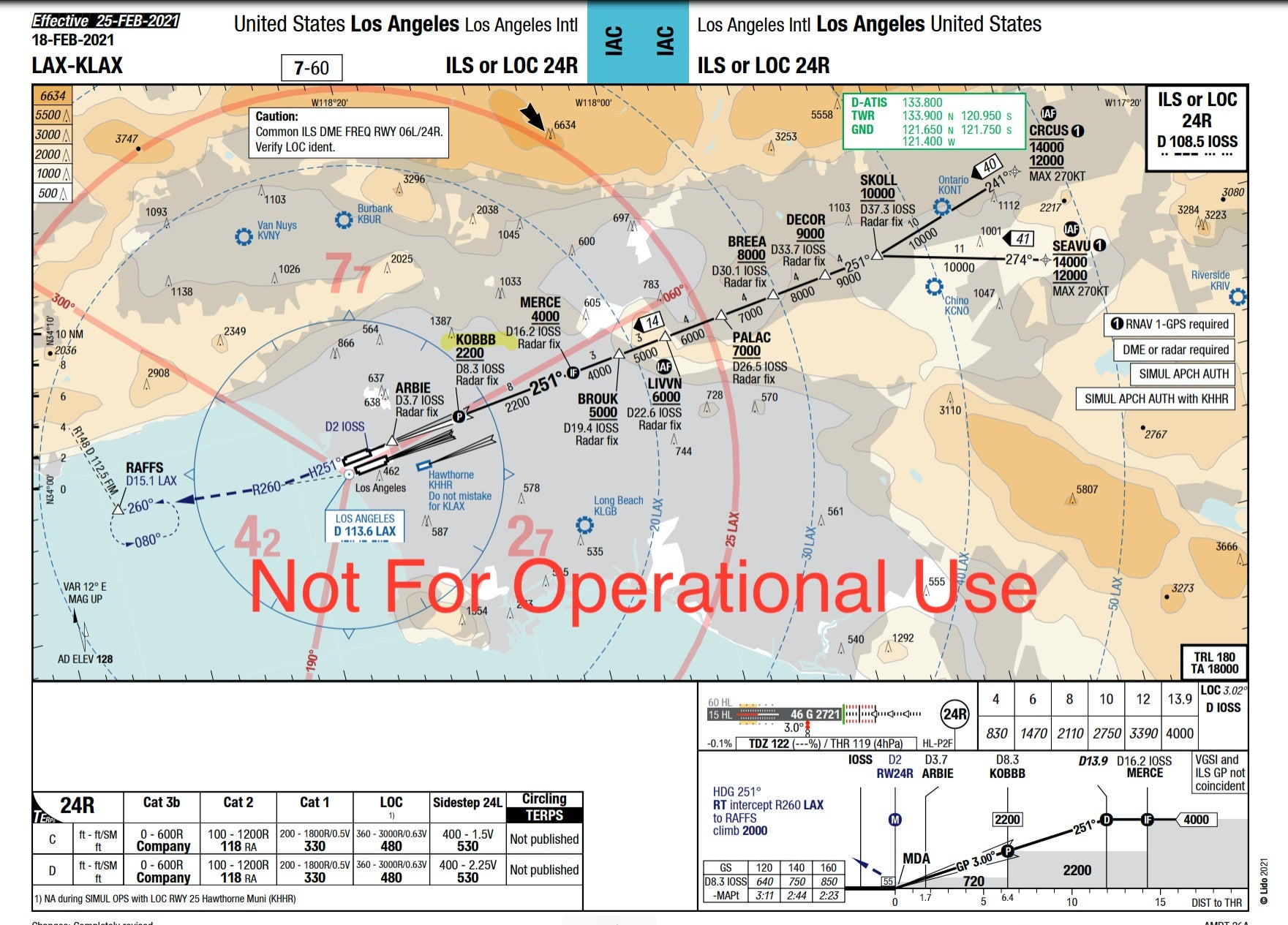 As pilots, we notice changes to our navigation charts all the time. In fact, they are updated every month to keep up with the changes made around the world. However, once in a while, changes are made that really make you smile.

To honor the lives of Kobe and Gianna Bryant, who were tragically killed along with seven others in a helicopter crash in Los Angeles in January 2020, aviation officials in the U.S. did something special.

As part of the final approach to the two westerly landing runways at LAX, we fly over the final approach point (FAP). This five-letter named point determines the location where the final stage of the descent begins. It is also the point to which ATC requires us to maintain our assigned speed before slowing to our final approach speed. All-in-all, the FAP is a pretty significant point.

However, what is the significance of these points and how do they get their names? As you'll see, these aren't the only two points in the world where the authorities got creative.

During World War II, aircraft returning to England from missions over Germany would often become lost during bad weather. To help them return home safely, navigation beacons were developed that would send out a signal, which the aircraft would receive and the pilots could then interpret which way they had to fly.

The technology of these beacons developed over the years, enabling pilots to not only be able to tell which direction the beacon is but also how far they are from it. Knowing both these factors, they could then navigate from one beacon to the next, creating the first airways.

The beacons would also act as junctions in the sky. By depicting these airways on a chart from beacon to beacon, pilots could then navigate wherever they wanted, simply flying from "junction to junction."

This beacon-to-beacon navigation worked well for a number of years, but the infrastructure needed to make this system work is significant. If the beacon broke, pilots didn’t know where it was so they couldn’t navigate on that airway. They also only had a finite useful range.

If you wanted to navigate accurately over vast open expanses, for example, oceans, this system wouldn’t work. What was needed was a system where there’s no need to rely on ground-based features. Something that aircraft could still determine their position by and still navigate accurately. For this, instead of looking down for guidance, aircraft started to look up.

With the arrival of GPS, along with the onboard inertial reference system, aircraft are now able to pinpoint their position with incredible accuracy. Instead of airways relying on physical beacons on the ground to pinpoint the junctions, these can now be defined by a GPS position. These waypoints are given five-letter names and there are a number of rules governing how they are named.

What are we going to call it?

In the U.K., the Directorate of Airspace Policy is responsible for the policy, use and allocation of waypoint designators. They are designated as either strategic or tactical waypoints, depending on their position and function.

Strategic waypoints are those that are used as part of a route structure and are likely to be used routinely as part of radio communications between Air Traffic Control (ATC) and pilots. To make these easier to use, these are given a standard International Civil Aviation Organisation (ICAO) five-letter code, known as a 5LNC -- 5 Letter Name Code. For example, the point NEDUL on the chart below is part of an arrival into London Heathrow.

In order to make these places pronounceable on the radio, guidance is taken from the excitingly named ICAO Annex 11 -- Air Traffic Services Appendix 2. This riveting piece of reading stipulates certain rules about how these waypoints should be named.

This states that "the significant point shall be designated by a unique five-letter pronounceable name-code" and that "this name-code designator shall be selected so as to avoid any difficulties in pronunciation by pilots or ATS personnel when speaking in the language used in ATS communications."

These are both quite important points as accents around the world vary considerably, especially when the speaker is being asked to use a language that is not their natural tongue.

Tactical waypoints are used more as part of a navigational procedure, such as an RNAV approach. As these are points that ATC will rarely need to communicate to pilots, they are given alphanumeric identifiers.

These use a combination of information from the airfield code (e.g. EGLL for Heathrow), the location of the fix and also a random number. Naturally, these don't have quite the same aesthetic appeal as places such as KOBBB, JIANI and NEDUL.

In the U.S., the procedure is very similar. Governed by the FAA, "fixes not co−located with a navigational aid must consist of a single five−letter pronounceable name. These five letters must serve as the name, identifier, and computer code."

So how come all the funky names?

Interestingly, the FAA document continues, "regional/service area office requests for specific five−letter names for radio fixes and waypoints should be avoided, but may be granted by AIM if feasible." This leads me to believe that although the FAA doesn't like fixes and waypoints having special names if a local authority has a special reason for doing so, the FAA will consider them.

However, judging by some of the waypoints out there, it appears that the FAA are more open to special names than the official line would suggest. So, what are some of the best ones?

Northern California is famous for many things, one of them being the wine-growing areas of the Sonoma and Napa valleys to the north of San Francisco. Flying in from the north, as we do from London, our route can take us via a number of wine-related waypoints such as MRRLO, LEGGS, MLBEC and CORKK.

Read more: Anyone else seeing these lights?’ — How often do pilots see UFOs?

Just a few miles to the south, San Jose is the gateway to Silicon Valley and enjoys a number of fun-named waypoints. The initial descent brings you in over the same wine region as the San Francisco arrival, so the pilots get to fly a series of vino-related points.

Starting at CHBLI, the arrival routes aircraft via GRIJO, ZININ and then CORKK. If coming in from the west, there's very much a facial hair-related theme with the brilliantly named RAZRR 4 arrival taking aircraft via GYLET, STUBL, RAZRR, OUCHH, NIKKT and GOTEE.

The Disney magic starts well before arriving in Orlando. Well, for the pilots at least. This has to be one of my favorites, with seemingly as many Disney references shoehorned in as possible.

First up there's the PIGLT 6 arrival. If there was a winner for the best series of waypoints, this would win by a country mile. Arriving from the north, the route starts with The Lion King taking us via HKUNA, MTATA and then on to Aladdin with JAZMN and JAFAR. It then jumps across to Winnie the Pooh with PIGLT before going back to The Lion King with RFIKI and back to Winnie the Pooh with TTIGR.

The waypoints into Pittsburgh were clearly named by a local sports fan. The FEWGA 6 arrival has pilots flying via PYRAT (the Pittsburgh baseball team is the Pirates) and LEMEW (local ice hockey hero and owner of the Pittsburgh Penguins team, Mario Lemieux). The sports theme doesn't stop there. FLURY, MLKIN, GUINZ, CYDNY and CRSBY are all named after past or present Penguins players.

One of the busiest airports in the U.S., Houston George Bush Intercontinental provides pilots with some obvious hints to one of the main industries in the city. When arriving from the west, the DRLLR 5 arrival with a DIESL transition gives a clue as to what is about to come. DIESL, STOCK and FFUEL are then followed by PPUMP, PPIPE, DRLLR and PTROL. Coming in from the north, pilots will fly over REFYN and OILLL.

The way in which waypoints are named is more thought-through than you may initially think. ATC and pilots have to be able to communicate these five-letter points over the radio, so they must be written in a way that can be pronounced as a word. That said, there's no reason for them to be boring.

The U.S. seems to lead the way with a multitude of waypoints named after places, people or topics that are close to the identity of the city airport that they serve. If anything, they bring some welcome smiles in the flight deck, heightening the excitement of arriving in a new city.