Articles
Charlie Page is a senior first officer on the Boeing 787 Dreamliner with over 10,000 hours of flying experience, both around Europe on the A320 family and worldwide on the B787. He is also a freelance writer, contributing to a range of print and online publications.
March 14, 2021
•
9 min read 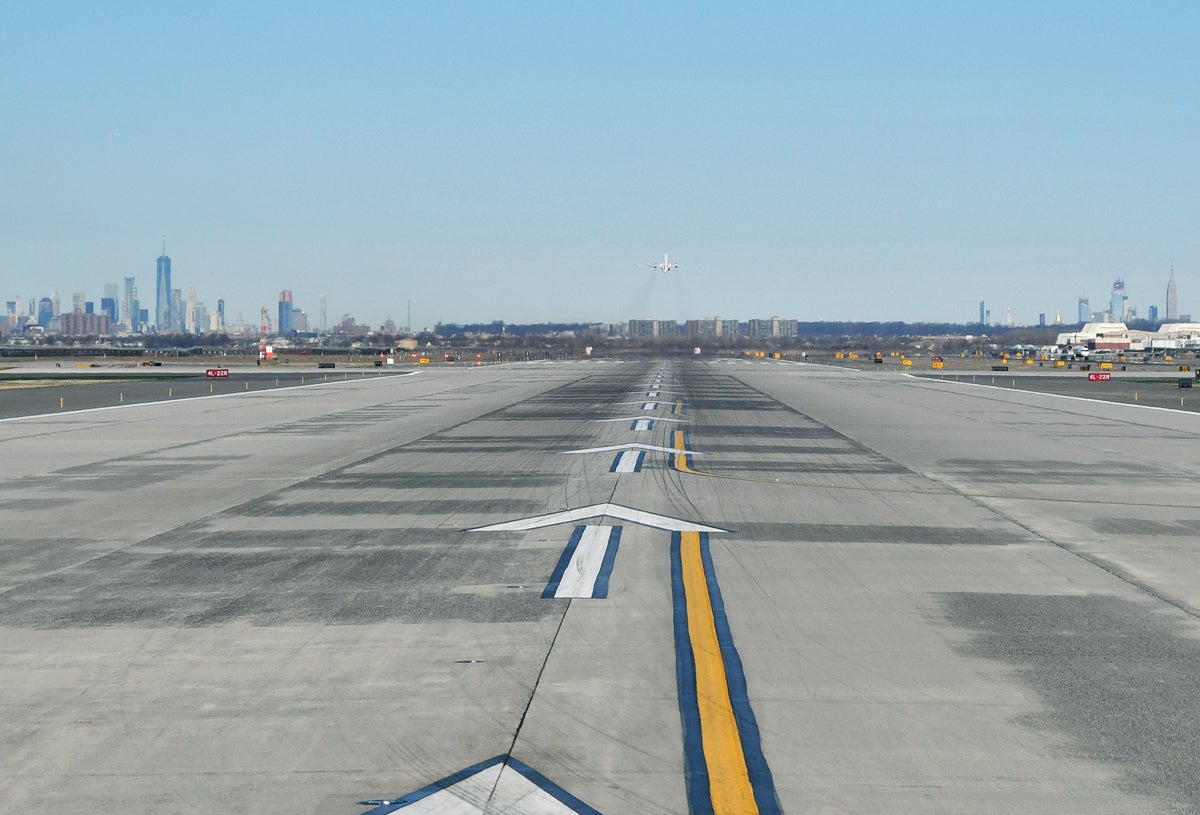 A recent Air Accidents Investigation Branch report noted that a seven-foot ladder was left on the runway at Birmingham International Airport (BHX) after it fell from a vehicle that had been used to complete some routine maintenance on the runway lighting system.

In the time that it was on the runway, three aircraft landed before it was retrieved by airport staff. None of the three aircraft came into contact with the ladder as they landed. So how common are events like this and how do airports stop them from happening?

Airports, like any high-use facility, need regular maintenance. This includes all areas of the operational area such as the runways, taxiways, parking stands and airfield lighting. However, it can often be difficult to carry out proper work when you're constantly being interrupted by aircraft getting in the way.

As a result, most airports leave the scheduled maintenance until a time when there is less aircraft movement -- at night. It's not uncommon for even major work to be done during the hours of darkness.

When resurfacing the runways, airports will use overnight hours when the airport is closed to do a small section at a time. Over the course of several weeks, an entire runway can be resurfaced with minimal impact on the flying program.

However, even smaller jobs are important, such as ensuring that the runway and taxiway lighting is all working. The approach lights are a significant part of identifying the runway when we land, particularly when the visibility is reduced by fog.

The AAIB report states that after completing routine maintenance on the approach lighting, the maintenance team gained permission from ATC to enter the runway to inspect the centreline and edge lights. Unbeknown to them, the ladder fell off the truck as they passed through the touchdown zone where it lay for 37 minutes before it was retrieved.

For every landing, the first thing pilots need to know is the landing distance available (LDA). Like with all things aviation, there’s a complicated wordy definition for this:

“The landing distance available (LDA) is the length of the runway which is declared available by the appropriate authority and is suitable for the ground run of an aeroplane landing.”

In practice, this means the length of the paved surface suitable for landing on. This may seem obvious, but some runways have what is known as a displaced threshold. Due to obstacles (buildings, roads, trees, etc.) in the approach path, the aircraft must touch down farther along the runway than the paved surface may suggest. This is the case at Birmingham, as seen below.

Read more: Anyone else seeing these lights?’ — How often do pilots see UFOs?

The runway at Birmingham is more than 10,000 feet long, but the displaced threshold means that the aiming point, the area on the runway where we aim to touchdown, is set quite far into the runway. It was at this location where the ladder fell onto the runway.

Crossing the runway threshold at 50 feet and at the final approach speed, the pilot flying (PF) will be looking towards the end of the runway. At this stage of flight, their mind is working in overdrive. Visually judging the rate of descent whilst simultaneously monitoring the airspeed, digital rate of descent and aircraft trajectory. The head-up display (HUD) in the Dreamliner is a great help in these tasks.

The PF is looking to ease the control column back at around 30 feet, raising the nose and slowing the rate of descent. This should result in the aircraft’s wheels meeting the runway near to the aiming point.

However, with the speed the aircraft is traveling, in the dark whilst looking at the far end of the runway, the chance of the pilots seeing an object on the runway is incredibly small.

Foreign object debris, or FOD for short, can consist of anything that is lying around on the ground on the aprons, taxiways and runways that should not be there. Plastic bags, bolts, stray suitcases and coffee cups can all pose a threat to equipment and personnel.

Aircraft engines draw in a vast amount of air and loose objects lying around could end up being sucked into the engine, potentially causing millions of pounds worth of damage. Even if objects are not drawn into the engine, the thrust created out the back of the engine is enough to blow these objects hundreds of feet, damaging anything that they hit.

Probably the most famous FOD-related event was when an Air France Concorde ran over a piece of metal that had detached from a Continental Airlines DC-10 on the runway at Paris Charles de Gaulle Airport. The FOD damage caused a tire to burst, which in turn lead to the rupturing of the fuel tank and caused a fire, resulting in the loss of 133 lives.

FOD damage can also be caused by wildlife. In 2014, a Spicejet Boeing 737 collided with a stray buffalo during its takeoff run from Surat in western India. The crew was able to reject the takeoff and exit the runway safely.

In May last year, a Southwest Boeing 737, once again at night, struck a man who had managed to find his way onto the runway. Just after the pilots had touched down, they observed the man on the runway. They tried to avoid him but were unable to do so. There were no injuries to the passengers and crew on the aircraft but airport authorities later announced that a man had been found deceased on the runway.

From the examples above, it's obvious that FOD is something that airports should, and do, take extremely seriously. For anyone working on the ramp at an airport, FOD awareness is an important part of their training. No matter whether you're a baggage handler or engineer, bus driver or pilot, we all have a responsibility to deal with FOD should we see it.

Part of the pilot's preflight safety inspection is to check the area around the aircraft is clear from FOD. Broken glass, loose pieces of the tarmac and stray bolts and screws can all cause damage to the tires should they run over them and even worse damage to the engines if they are ingested.

At major airports, such as London Heathrow, the runways are closed for a few minutes every few hours for a runway inspection. A team of normally two or three vehicles enter the runway and drive the length of it looking for anything untoward.

However, an inspection like this may still not have caught the FOD which caused the Air France Concorde to crash, and maybe not even the ladder on the runway at Birmingham. What's needed is a system that can detect FOD at any time, without the need for a physical runway inspection.

Back in the good old days (pre-COVID-19), an aircraft would land or take off at Heathrow every 45 seconds, on average. With this volume of traffic, it's impossible to physically check the runway each time an aircraft has used it. What's needed is an automated system that alerts operators to the presence of FOD.

In 2007, Heathrow Airport installed the MOOG Tarsier FOD detection system. Since then, the traffic flow has not been interrupted by any FOD-related emergencies.

The system works by installing two cameras alongside the runway, one to cover each half. These cameras then use millimeter-wave radar to continuously scan the runways and are able to detect FOD, birds and wildlife with a high degree of accuracy.

The specific radar/software combination is even able to monitor the condition of the runway surface. If there is a change to the height of the surface, or a crack develops, the system is able to alert the system operators who are able to respond accordingly.

A live video feeds from the military specification day/night camera systems allow object verification before airport personnel is dispatched to remove debris. If the problem is severe enough, it may warrant the temporary closure of the runway whilst repairs are made.

The AAIB report into the incident in Birmingham stated that the airport did not have any such equipment, which would have detected the ladder on the runway.

The threat of foreign object debris to aircraft and people is something that airports take very seriously. Any object which is left loose on the ground could potentially cause serious damage to property or people at best, and at worst, cause a serious safety hazard to aircraft.

By remaining vigilant to their surroundings, airport staff can help reduce the threat of FOD damage. Even when we are taxiing between the runway and the gate, if we see anything that should not be there, we will always let ATC know so that they can organize to have it removed.

Airport operational staff carry out regular inspections of the runways, assisted between inspections by advanced technological systems such as the Tarsier system. With all these levels of protection in place, the threat of FOD is greatly reduced, keeping those onboard our aircraft safe.