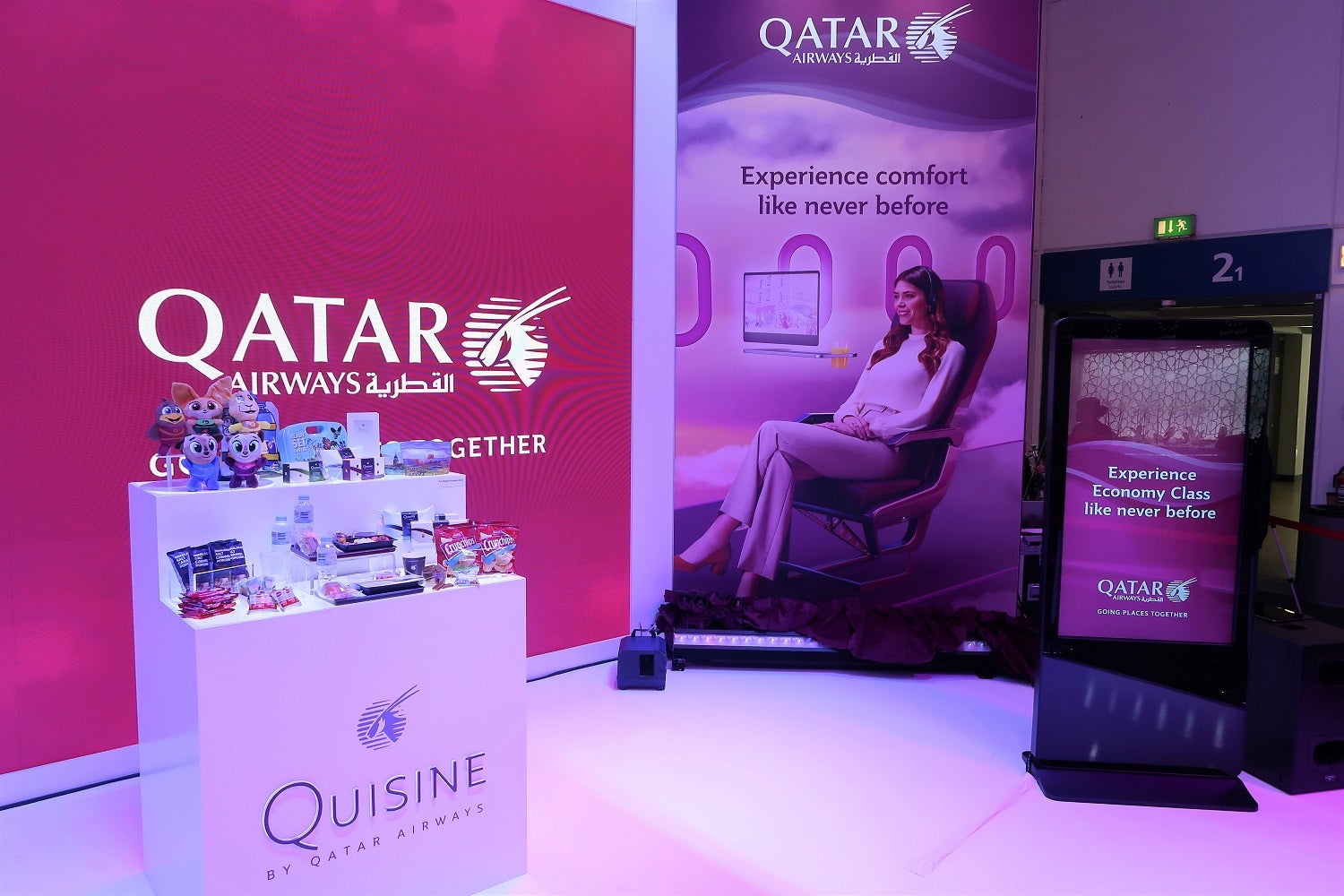 Qatar Unveils Brand New Economy Seat and 'Quisine' Soft Product
This post contains references to products from one or more of our advertisers. We may receive compensation when you click on links to those products. Terms apply to the offers listed on this page. For an explanation of our Advertising Policy, visit this page.

In 2017, Qatar Airways used the stage at ITB Berlin to unveil its truly revolutionary Qsuite business-class product. Since its unveiling, the product has widely been considered to be the best business-class seat flying, winning TPG Awards' Best International Business Class.

In a press conference after the unveiling, Qatar Airways CEO Akbar Al Baker confirmed that the first aircraft to get the new Qatar economy seat will be its soon-to-be-delivered Airbus A321neo and A321LR aircraft. Qatar is set to begin taking delivery of the A321neo and A321LR later this year, and they will feature both the new economy-class seat and a new version of a business-class seat, which presumably was not ready to be unveiled on Wednesday.

The A321neos and A321LRs are set to replace some of the older aircraft in Qatar's mostly young fleet. Specifically, they'll phase out some of the A320s and even replace the much larger A330 on some routes.

Unlike its Middle Eastern rival Emirates, which currently only flies Airbus A380 and Boeing 777 aircraft, Qatar's short- and mid-haul fleet utilizes narrow-body aircraft — consisting of two Airbus A319, 35 Airbus A320 and six A321 aircraft. For each of the narrow-body aircraft part of the fleet, the economy-class cabin is arranged in a standard 3-3 configuration.

Al Baker confirmed that the new economy seat won't be limited to just the A321neo. It's expected to be rolled out across the airline over time, next appearing on Qatar's 777X aircraft, of which the airline has 60 on order. No retrofit schedule was shared in the initial presentation, but Al Baker later said that it would be five to eight years before the new economy seat is installed fleetwide.

There are two aspects to this new economy product: The new seat and an improved soft product, which Qatar is naming "Quisine." While details are fairly slim at this point, Qatar had a display of the new soft-product items at the unveiling, including examples of the new meals, snacks and kid-focused items.

Qatar is also "going green with Quisine," claiming an 80% increase in recyclable and biodegradable products and that 80% of the tray items comply with the ban on single-use plastic.

While it's going to be years before the seat is rolled out across the fleet, it won't be long before economy passengers start enjoying these soft-product improvements. Al Baker announced that Quisine will roll out "from April" and expand to the entire network by the end of 2019.

Details of the Seat

Just like when it unveiled its new Qsuite product, Qatar had a true version of its product on display at ITB Berlin. And we got a few minutes to explore it for ourselves. Here's what we found:

Headrest: The new economy seat has a headrest that can be shifted upward and has adjustable wings. While economy passengers are likely to use to these features on long-haul economy products, this is a very nice feature to have for short- and mid-haul flights.

Tray table: The new economy seat has two tray tables: A bi-fold standard tray table and an additional tray table with cup holder with a non-slip bottom, which could be useful if you wanted to bring your own entertainment device.

Recline: The seat is designed with a "semi-fixed back shell design" with a pre-recline of six degrees. The seat's recline feature adjusts the seat bottom forward rather than the lowering the seatback. That's going to be welcome news for those of us who need to work on our laptop in economy. However, it's likely not going to be as comfortable for those trying to sleep. Qatar claims that the seat has "a 19-degree recline system."

Inflight Entertainment: The seatback of the new Qatar economy seat has a 13.3-inch inflight entertainment display with 4K resolution. For those who bring their own entertainment, the seat has a USB type C outlet "with high-power fast-charging capabilities."

Qatar is also committing to provide "connectivity at all flight levels" through its Inmarsat-powered Wi-Fi system. Details are light, but Qatar claimed at the press conference that the Wi-Fi speeds would be "up to 10 times faster."

Seat pitch: The pitch of the seats on display measured 30 inches. However, it's unclear if this will be the actual seat pitch installed. Despite the limited seat pitch, the seat's curved design left plenty of room for my knees.

Both Qatar's A320 and A321 economy seats currently feature 31 inches of pitch, while the A319 varies on seat pitch offering between 31 and 32 inches. So, a decrease to 30 inches could mean Qatar is planning a denser economy product.

While this new economy seat isn't nearly as revolutionary as Qatar's Qsuite business-class product, it's encouraging to see Qatar focus on improving the economy experience. The seat includes many features that some of the best long-haul economy seat products have, yet it's debuting on Qatar's short-haul and mid-haul fleet before being retrofit onto other aircraft.