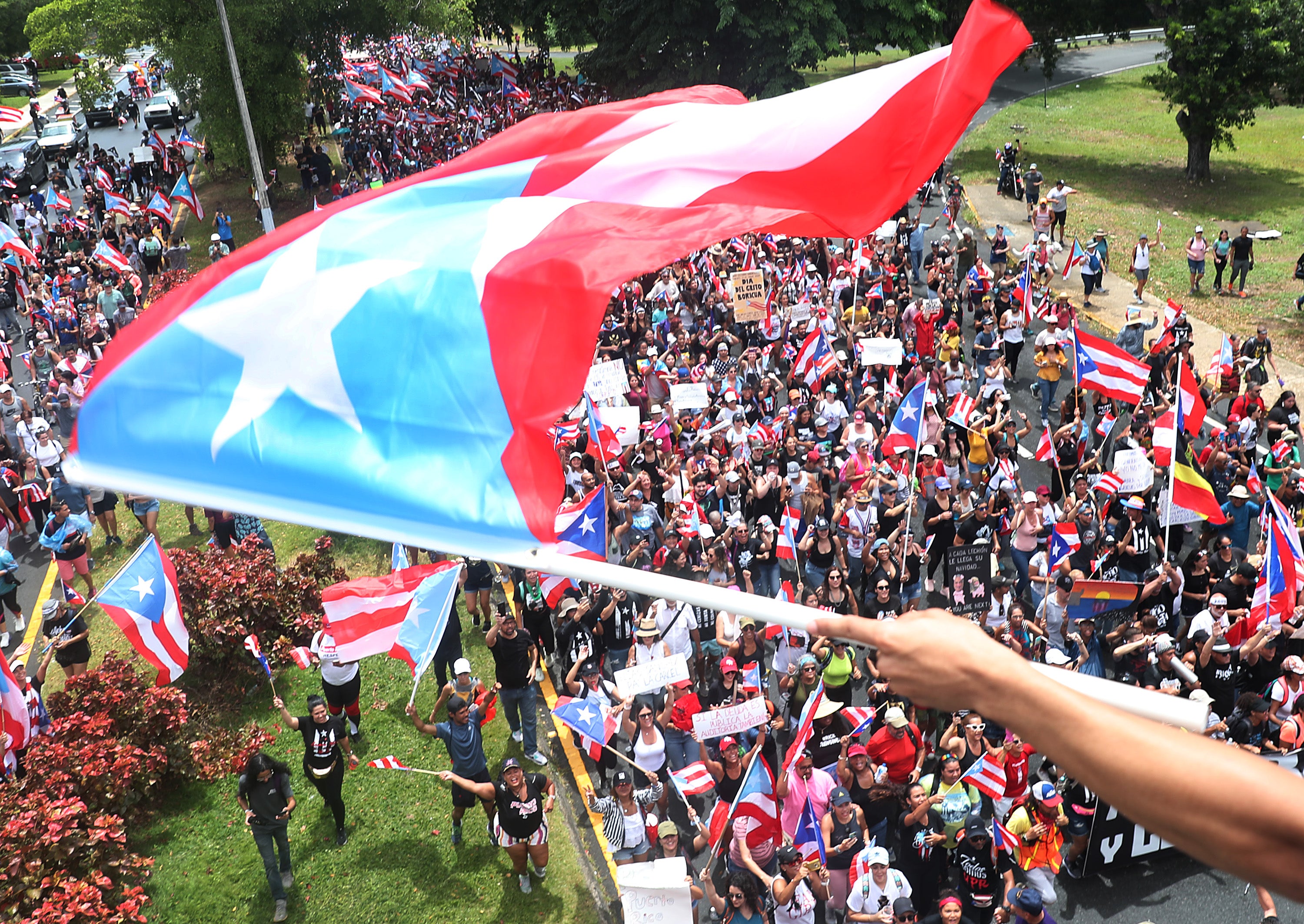 Puerto Rico Celebrates Its Governor's Resignation, and Tourists Shouldn't Be Worried
This post contains references to products from one or more of our advertisers. We may receive compensation when you click on links to those products. Terms apply to the offers listed on this page. For an explanation of our Advertising Policy, visit this page.

Puerto Rico has erupted into countrywide celebration after Gov. Ricardo Rosselló announced he would resign after weeks of protests amid a scandal about leaked text messages.

In the capital, San Juan, streets once filled with demonstrators have transformed into scenes of impromptu festivities, and picket signs have been discarded in favor of dancing and fireworks. All the while, the Puerto Rican flags have kept waving.

And amid the raucous partying are summer tourists visiting the Caribbean island. But is it safe for them?

Anthony Tipping, regional intelligence analyst for WorldAware — a global risk-management firm headquartered in Annapolis, Maryland — said he wouldn't advise tourists planning on going to Puerto Rico to alter their plans, but stressed they ought to take certain commonsense precautions, like keeping abreast of the local news to avoid potential new protests against Rosselló's successor, who has indicated she would support police use of force against demonstrators.

"Old San Juan has narrow streets, and with so many people convening in these areas, the risk of violence and crime, such as pickpocketing, increases," he said by phone. "Situational awareness at all times is always a good idea."

Since Puerto Rico is an American territory, it doesn't count as an overseas destination and thus doesn't rate an entry in the US State Department's website for travel advisories. But the analogous Canadian government website only advises tourists to take normal precautions while in San Juan or the rest of Puerto Rico. The Zika virus merits a warning. The political upheaval? Not a word.

The Puerto Rican tourism board definitely thinks it's fine for visitors, and has taken pains to point out that people are welcome to eat at Puerto Rican restaurants, absorb Puerto Rican culture and, naturally, spend those US dollars.

“With the recent protests on the island, calling for the Governor’s resignation, a resolution was needed for the island to continue its strong path to recovery,” the tourism agency told the New York Post. “We are encouraged by the accounts of many travelers who arrived on the island during the last two weeks to enjoy the island’s gastronomy, attractions and cultural offerings, and we are welcoming new travelers each day.”

On the Discover Puerto Rico webpage, there's no mention of Rosselló's downfall, the protests or celebrations of his ouster. Instead, would-be visitors are greeted with a photo of Lin-Manuel Miranda — who positively crowed on Twitter when he heard the news.

The chaos of the last two weeks began because of "Rickygate," when leaked group chats between Rosselló and his aides revealed messages that disparaged everyone from women to hurricane victims and members of the LGBTQ community. Protests quickly escalated, centered around La Fortaleza, the governor's mansion in San Juan, and at times flirted with violence. Some protesters set fire to garbage and stormed barricades in Old San Juan, and riot police fired tear gas into crowds.

But even then — even right by the governor's mansion, and as cruise lines diverted from their usual Puerto Rican port of call — it felt safe to be a tourist in Old San Juan, at least during the day, according to Ivonne Morales, 28, a New York-based travel influencer and social-media coordinator who was in Puerto Rico during most of the protests.

"It was totally safe there," she said by telephone. "There was a bunch of tourists there, and they were very conscious about the tourists and local shops in San Juan. [The protesters] would give us time to do our shopping and normal activities, give the businesses a chance to sell, and then around 5pm, they would say, 'Guys, you'd better walk away from Old San Juan, because the protests will start at around 5.'"

Her friend, Ivangellys Gonzalez, 24, a New York-based creative director, said some days were worse than others, but it never felt dangerous, at least for visitors.

"People got really emotional, and there was a lot of vandalism, a lot of bad things being written on the walls of government buildings. And even stores that had nothing to do with it except they happened to be near to La Fortaleza," she said. "Stores were boarded up like it was Hurricane Maria all over again, and a lot of jewelry stores took out their jewelry."

The demonstrations culminated with a half million Puerto Rican marchers shutting down a major highway in San Juan. Finally, on Wednesday just before midnight, Rosselló announced he would step down on Aug. 2.

“Puerto Rico remains open for tourism and changes to government leadership on the island do not change this,” Discover Puerto Rico said.

Still, Tipping suggested arranging transportation ahead of time, as Puerto Rico has a notoriously weak transportation network and current events will have pushed it to the limit. And he said that though he wouldn't deter visitors, he would also leave them with a caveat, at least for the next year or so.

"There's always the risk that protestors start throwing rocks, for example, or start fires, and I don't think that risk has dissipated, because it's still an unstable political environment with discontent against the interim government coming in," he said. "But at least until the inauguration on Aug. 2, it's unlikely the discontent will reach the same levels as that directed at Rosselló, though the potential for unrest remains at least until the election in 2020."

Gonzalez, who has family on the island, said people who are still worried should consider trying places outside of the usual historic sections of San Juan.

"Outside of Old San Juan, there's a lot really good places to see, and there may not be a lot of that antagonism," she said.

She remains optimistic that the resignation is a major turning point in the island's fortunes — and its appeal to travelers.

"Everybody in Puerto Rico is family, and people treat each other with respect and dignity, and now that people are happy, this is going to change everything and tourism there will be blooming more than ever before, because Puerto Rico is only going to get better," she said. "After Maria, after what happened the last two weeks, this is their break. We're going to welcome everybody with open arms, because now we have better reason to."