Articles
Nicky Kelvin is the director of content and face of TPG UK, and is also an award-winning photographer. Before joining TPG UK, he was a record label lawyer and avid traveler sharing points wisdom as the "Miles Mogul."
Follow
Nov. 12, 2019
•
7 min read 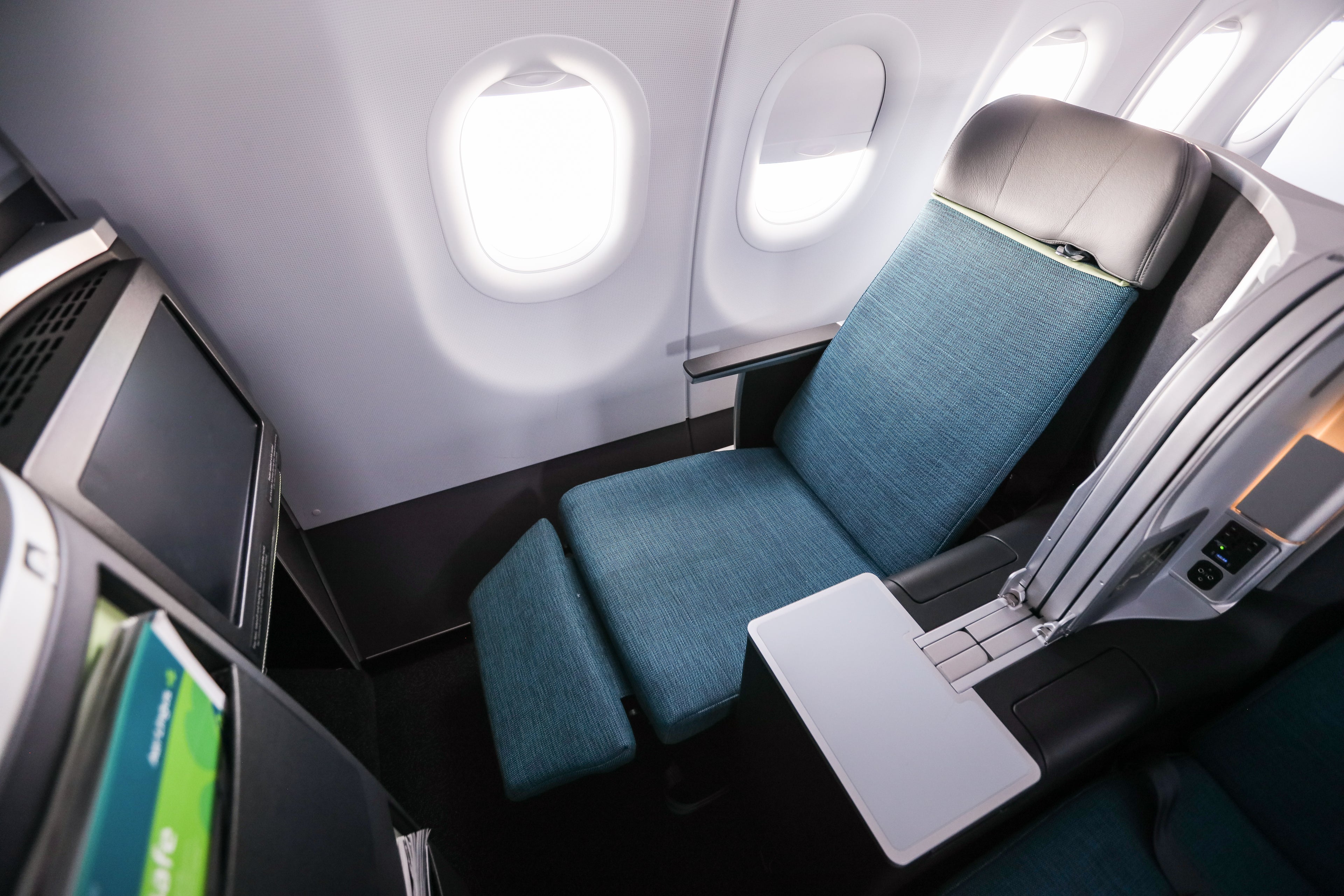 Aer Lingus has been upping its game recently with a brand refresh and the delivery of new aircraft. The Irish airline has a total of eight Airbus A321LR aircraft on order for leasing and has already taken delivery of four, which are in operation and are set to replace the carrier's 757s on some transatlantic routes.

The carrier previously announced that it would fly its Airbus A321LR aircraft on the short hop between Dublin and London, and it seemed the perfect opportunity for me to jump on board and take a close look at the business-class cabin on this narrow-body aircraft.

On entering the cabin, it looked fresh, new and calming. The business-class cabin spans five rows and includes 16 seats. Rows 2, 4 and 6 are set up in a 2-2 configuration, with Rows 3 and 5 hosting the “throne” seats in a 1-1 configuration.

If you're a solo traveler, you'll want to nab the odd-numbered row seats, and those traveling as a pair may want to aim for even-numbered rows to score a set of seats next to each other.

It's worth noting that Row 2 is the front row. I was seated in 2K, meaning I was at the very front of the cabin. Once in my seat, I found it to be very comfortable with plenty of legroom.

There's a very handy storage compartment in the footwell, and a smaller storage area for a bottle of water at shoulder height in the side of the seat.

There was a further storage area under the IFE screen, which would have nicely fit phones, passports and other small items.

In the throne seats, there is plenty of of flat space for working, drinks and ad hoc storage. Seats in even-numbered rows with a set of two seats have significantly less flat space — just a shared armrest and small tray for drinks.

The tray table slides down from the side of the seat, and can be swung back and forth allowing passengers to get in and out of the seat easily.

It’s not the largest table, but notably solid and not wobbly. It was big enough for a large laptop for working.

The seat reclines into a fully flat bed and is very comfortable when in its lie-flat position. I definitely could have managed a decent night's sleep on this on an eastbound transatlantic flight. Though for this less than one-hour flight, I didn't have time to take full advantage of the lie-flat seat. In total, the bed measures 78 inches — or 6 feet 6 inches.

If you're sitting in one of the even-numbered rows with two seats, when the seat is in its lie-flat position, there's decent head privacy from the passenger seated next to you.

In the semi-reclined position the seat was very comfortable, and I used the massage function, which worked well and was a welcome gimmick.

The touchscreen inflight entertainment system was operational on this short flight, but the selection left something to be desired. There were only eight movies on offer, although there was a more substantial TV offering. It may be that on longer flights, the airline loads a wider selection of films.

The seat also features an over-the-shoulder seat beat, an adjustable reading light, two seat control panels, a universal power outlet and USB port and a handheld controller for the IFE — although operating via touch screen was far simpler.

I took a brief look at the economy cabin, which looked fresh, modern and comfortable for coach.

In the economy cabin, there are a total of 168 seats, which are arranged in a 3-3 configuration. Each of the seats has a generous 31-32 inches of pitch and 18 inches of width.

Each of the A321LRs Aer Lingus will take delivery of will come equipped with Wi-Fi. On this short hop to between Dublin and London, I found the Wi-Fi to work well, though was on the pricey side. However, Wi-Fi on transatlantic flights is free.

Predicting the future of A321LR routes has become difficult due to Airbus delaying the delivery of aircraft. For example, the Dublin (DUB) to Montreal (YUL) route that was planned to be operated by the A321LR has now been postponed until some time in 2020. Note that the routes below are subject to change as delivery and availability of aircraft changes. You should double check the aircraft operating your flight before making a booking.

The following routes are currently served by the Aer Lingus A321LR:

The A321LR will serve additional routes from Ireland to North America as Aer Lingus takes delivery of additional aircraft. Future A321LR routes include:

In addition to using cash, Aer Lingus flights can also be booked using points and miles. Popular redemptions include using Avios by transferring them between programs or United MileagePlus miles. All routes from Ireland to the East Coast of the U.S. price at the following rates:

You'll notice that the taxes and fees due on flights using AerClub Avios are less than what you often have to pay with British Airways Avios. Because of that, and the fact that the program is a 1:1 transfer partner of American Express Membership Rewards, the Aer Lingus AerClub could offer supreme value if you're looking to test out this new business-class product on the A321LR.

Flying Aer Lingus' A321LR in business class was a real treat for such a short flight, and I wouldn’t hesitate to fly this product across the Atlantic. It's especially good when taking into account the low taxes and fees charged when using Avios on Aer Lingus compared to similar routes on British Airways out of London, and the ability to preclear US Immigration and Customs before departing Ireland, allowing you to land in the US as a domestic passenger.