Not Just Kim and Trump: Why Is Everyone Going to Singapore? 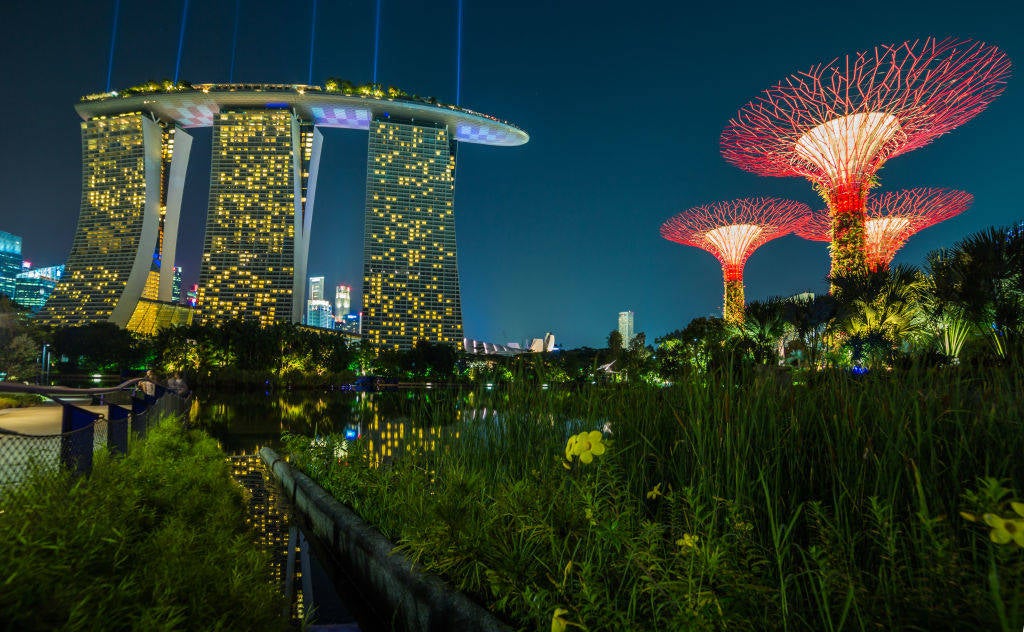 Not Just Kim and Trump: Why Is Everyone Going to Singapore?
This post contains references to products from one or more of our advertisers. We may receive compensation when you click on links to those products. Terms apply to the offers listed on this page. For an explanation of our Advertising Policy, visit this page.

When I was living in Southeast Asia in the mid-1990s, Singapore had a weird reputation. On the one hand, it was a dream country for Western expatriates: developed, modern, clean, peaceful, English-speaking, with great housing and plenty of international restaurants—if you were living there for work, you were likely making serious bank. On the other, it was boring and repressive. The expats I knew there couldn't wait to hop flights to Vietnam or Cambodia—anywhere that didn't shut down at 10:30 on a Saturday night. Singapore was the opposite of that old adage: You might want to live there, but you wouldn't want to visit.

20 years later, however, tourism is big business in Singapore. International tourist arrivals have more than doubled since 1997, to 17.4 million in 2017—triple the country's population—and tourism contributes 4 percent of Singapore's GDP, or about $12 billion last year. More important, a visit to Singapore no longer seems like a jaunt into glossy purgatory; it's actually kind of a fun place, and with enough mojo to host this week’s US–North Korea summit.

How did this happen? How did Singapore go from "Disneyland with the death penalty," as the novelist William Gibson dubbed it in Wired in 1993, to a worthy rival to Hong Kong?

As I see it, Singapore succeeded by doing what it does best: being boring. That is, it has approached the world of tourism with the same pragmatism and efficiency that have been the country's hallmarks since it split from Malaysia in 1965. Just as important, Singapore has never tried to be something it's not: hipper than thou, gritty and indie, or a historical throwback. It's 278 square miles of shopping, eating, and relaxing. Meanwhile, too, the rest of Asia (and the world) have evolved in ways that make Singapore—staid, comfy, colorful, tasty Singapore—stand out like it never used to.

If Singapore has a fundamental turning point in its tourism evolution, it's probably the construction, beginning in 1977, of Changi airport. Built on reclaimed land near the World War Two–era Changi Air Base, the airport enabled air traffic to and through Singapore to grow enormously, from 12 million passengers in 1982 to 62.2 million passing through its now four terminals in 2017. Maybe more important, it's an incredibly good airport, easy to get to and around, with excellent food and lounges and even decent lighting. Since Skytrax launched its Airport of the Year award in 2000, Changi (which introduced Wi-Fi that year!) has won nine times, including the last six years in a row. Hong Kong, meanwhile, has won seven times; Seoul's Incheon twice.

(It's maybe worth noting that other airports in the region, such as Thailand's Bangkok - Suvarnabhumi and Kuala Lumpur in Malaysia, were attempting at the same time to become similarly large international hubs—but haven't quite succeeded.)

Of course, what good is having the world's best airport if you don't also have the world's best airline? And Singapore Airlines has been so good for so long, it's almost a joke. There are literally hundreds of awards listed on this page, from Best First Class to "Best Business Class White Wine (Coldstream Hills Chardonnay 2015, Yarra Valley Victoria Australia)." When you're operating the longest of long-haul routes, you have to make the prospect of a 17-hour flight appealing.

To be sure, this is what Singapore just does right: infrastructure. It has the best in the world if you're looking at cities, and if you're going country by country, it ranks sixth. And infrastructure is, in some ways, easy. You just invest lots of money in the right places. And since Singapore is only about the size of Lexington, Kentucky, it doesn't have to make too many hard choices about which projects in which places will get funding and which won't.

At the same time, all that infrastructure does no good if there's nothing to actually do—you've got to come to Singapore for something, right? Here, too, Singapore hasn't strayed from the path it set out on decades ago. Its attractions are mainstream. There's a zoo that not only helped pioneer cage-free, "open concept" environments for its animals but also, in 1994, began offering a Night Safari that showcased nocturnal creatures in their natural habitats—and let visitors escape the punishing equatorial sun. For shopping, there are Orchard Road's many, many, many malls, which tend to focus on international and luxury brands, from Uniqlo to Cartier. Sentosa island is all about the beach—and it's where Donald Trump and Kim Jong Un are meeting. It bills itself as "The State of Fun."

All of this, you may notice, is very family-friendly, which is surely intentional. Singapore exists at the crossroads of multiple cultures, both at home (it's about three-quarters ethnic Chinese, with the rest Malay and Indian) and in the context of its neighbors, the majority-Muslim nations of Malaysia, Indonesia, and Brunei, not to mention China and Buddhist Southeast Asia. Throw in several tens of millions of visitors from the rest of the world, and you've got to appeal to the broadest possible demographic.

Which is actually kind of a turnaround. Singapore once had a reputation for seediness—Paul Theroux's 1973 novel Saint Jack (and the 1979 film directed by Peter Bogdanovich) is about an American pimp tussling with the Chinese mafia here—and prostitution has long been legal. Still, even that seediness felt in line with a 1978 tourism poster declaring, "Courtesy is our way of life": When I first visited in late 2004, I was approached one evening by an older Chinese gentleman who asked me, in a plummy accent that was more British than Singaporean, whether I had need of female companionship that night; I politely declined, and he went back to smoking his pipe. And when I did go to the red-light district, it was to eat really good Peranakan cuisine (of which more in a moment).

Still, sin has crept back into Singapore—in the form of casinos. Marina Bay Sands and Resorts World Sentosa both opened in 2010, and in their first year "netted $5.1 billion in gambling revenue," according to Time. (Incidentally, Singaporean citizens are deterred from entering casinos by a $100-a-day fee.) While these casinos are still far from rivaling Macau, or even Las Vegas, they brought with them important ancillary businesses, like Universal Studios, which is now Singapore's prime amusement park—and another example of its mainstream, internationalist ethos.

Lust and avarice aside, the biggest sin in Singapore is gluttony: The food there has long been awesome, a deft and delicious melding of Chinese, Malay, and Indian ingredients and techniques, with an ever-improving array of worldwide cuisines, from Michelin-starred French to gourmet burgers. But as incredible as the food has been—particularly in the hawker centers where in the 1970s and '80s the government corralled street-food vendors to improve hygiene—it took a while to attract attention from abroad.

"I'd say it wasn't until the late 1990s or early 2000s that I started seeing a greater interest in Singapore as a tourist destination—and a lot of that seemed to be food-related," the novelist Cheryl Lu-Lien Tan told me by email. "To me, it was really shows, stories and personalities like Anthony Bourdain and Calvin Trillin"—who ate there in 2008 and 2007, respectively—"discovering the cuisine of Singapore, tasting it, loving it and feeling like it was such a unique and incredible style of cooking and eating that really ignited a lot more tourist interest in Singapore."

Here, too, government entities got involved, led by the Singapore Tourism Board. One of their initiatives was called Singapore Takeout, which brought local chefs around the world to prepare Singaporean dishes for the public. But is the way to a tourist's wallet really through his stomach?

Gauging the success of Singapore as a culinary destination is not, however, straightforward. According to the tourism board, food and beverage expenditures accounted for 10 percent of receipts way back in 2012, and 60 percent of visitors partook of local cuisine. That seems somewhat low to me for a culinary destination, but more up-to-date stats were not available. At the same time, I've noticed fewer Singaporean culinary promotions where I live in New York City. Maybe the marketing has fizzled? Or maybe Singapore's culinary rep is as established as it's going to get. One of its top Michelin-rated restaurants closed in February, and Joël Robuchon announced he'd be shutting down his two as well.

Not that any of that really matters. What Singapore has, and what pulls tourists in, is consistency. For decades now, the lure has been this: We don't care where you come from, but if you have money to spend, we've got the malls and restaurants, banks and beaches, hospitals and zoos and air-conditioning you might not have access to at home. In a world where risk and revolution keep upending our established travel patterns, Singapore's dedication to stability—to being the Switzerland or Monaco of Asia—is its fundamental appeal. Authoritarianism never tasted so sweet.

Matt Gross writes about travel, food, parenting, running, and many other things. Follow him on Instagram @worldmatt.