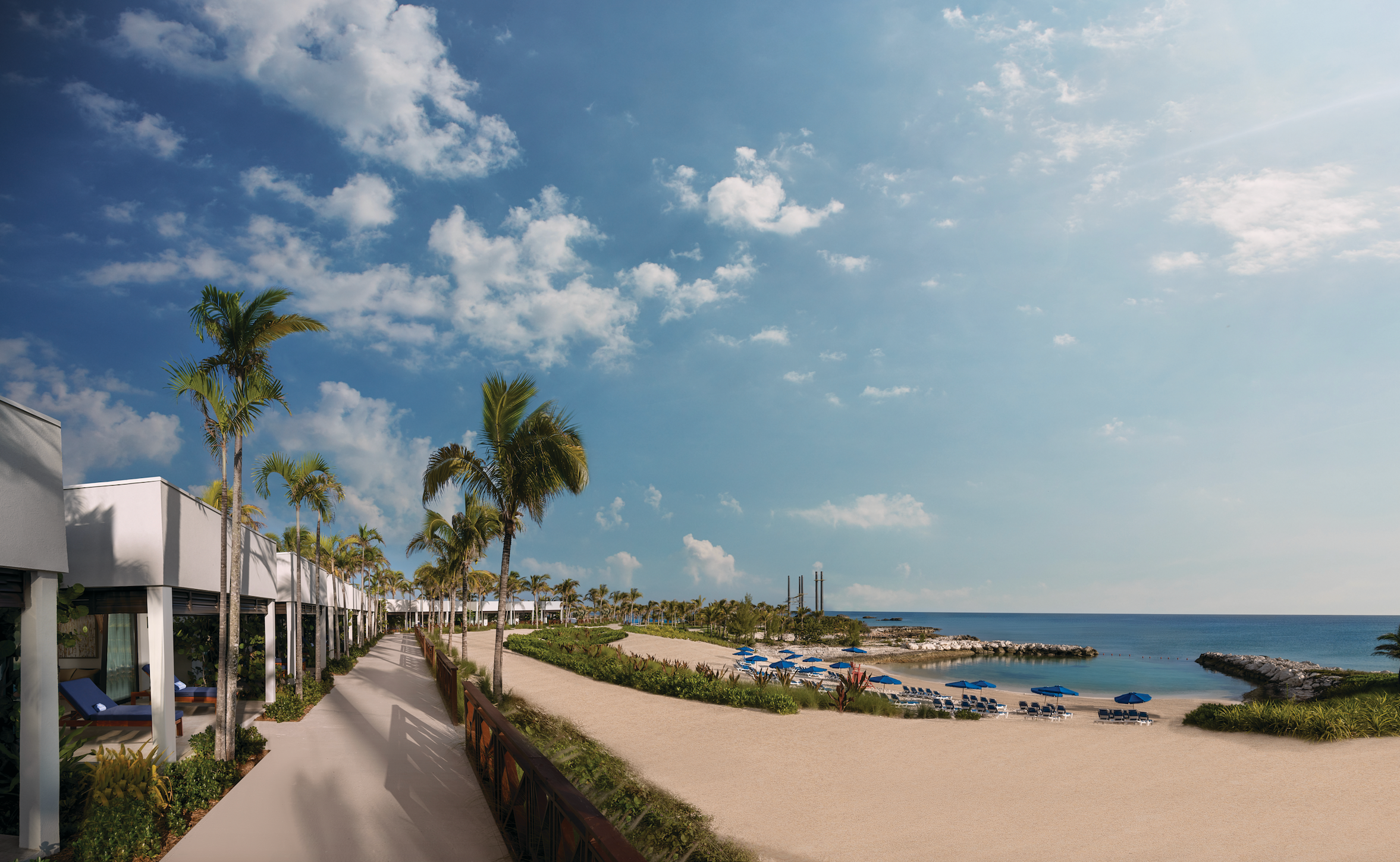 Inside the exclusive (and expensive) new beach retreat on this cruise line's private island
This post contains references to products from one or more of our advertisers. We may receive compensation when you click on links to those products. Terms apply to the offers listed on this page. For an explanation of our Advertising Policy, visit this page.

Would you pay more than $1,000 for access to a private villa on a beach for the day?

Norwegian Cruise Line is betting that at least a few people will.

This month, the line finally unveiled the long-awaited, super-swanky villa area that’s it’s been building at Great Stirrup Cay, its private island in the Bahamas. It features beachside accommodations that cost as much as $1,100 per day.

Dubbed Silver Cove and located at a secluded corner of the island, the exclusive, gated hideaway is open only to cruise ship passengers who book one of the 38 private villas within the compound.

In addition to the villas, Silver Cove is home to a private Mandara Spa, a Moët & Chandon Champagne bar, and an exclusive restaurant called the Silver Cove Restaurant and Bar.

As I saw over the weekend during a tour of the complex, this just may be the most over-the-top cruise line island area ever built.

The 38 villas include two insanely large “family suite villas” overlooking a picture-perfect beach that each have two bedrooms, including a giant master bedroom with a spa tub and shower; a private dining area; and plenty of space for entertainment.

There also are six one-bedroom villas that each have sizeable living areas with a wet bar and a separate, private bedroom with king-sized bed.

The rest of the villas are studios with sitting areas and bathrooms with a shower but no bedrooms. Depending on their location, they either are called Ocean Villas or Lagoon Villas.

I only was able to see the two-bedroom villas from a distance, but a Norwegian representative took me on a walk through of a one-bedroom villa and a studio. My initial impression was one of wow. The technical term might be “blown away.”

I’ve seen a lot of private island cabanas over the years, and these beachside accommodations are something in a whole different league. The villas are sleek and stylish, air-conditioned throughout, and loaded with upscale touches such as large televisions with on-demand entertainment.

Each of the villas has an outdoor patio area with lounge seating and sweeping views down to a beach.

In addition to being blown away by the villas, I also was a bit blown away by their pricing. The studios are the most reasonable option, at $299 to $799 per day, depending on demand. The one-bedroom villas are going for $449 to $899, while the two-bedroom versions are listed from $599 to $1,100.

Keep in mind that this is for a stay that, at most, will last about eight hours. Norwegian ships typically arrive at Great Stirrup Cay around 8:30 a.m. and depart by 5 p.m.

One thing to note about the pricing is that it's per villa, not per person. If you book a studio, you can bring up to six people (including yourself) into the Silver Cove area at no extra charge. One-bedroom villas come with access for eight to 10 people. Two-bedroom villas allow for groups of up to 16 people.

Still, the cheapskate in me says that paying up to $1,100 for what basically amounts to a place to dump your bags while you’re out snorkeling is a bit steep. But, of course, not everyone is a cheapskate like me.

For those with money to burn, the villas certainly bring privacy and exclusivity. Silver Cove’s main beach area, the Silver Cove Lagoon, is a crescent of pristine, powdery sand that's blissfully uncrowded, compared to the open-to-everyone parts of Great Stirrup Cay. It has the feel of the beach at a luxury resort.

The Moët & Chandon Bar, which serves Moët Ice Imperial, also has an air of exclusivity, as it’s only open to Silver Cove guests. Alas, you’ll still pay up for the privilege of a midday bubbly run. The Champagne goes for a hefty $25 per glass.

I couldn’t tour Silver Cove’s Mandara Spa, which has four treatment rooms with walls open to the ocean and two outdoor hot tubs. As with the beverages at the Moët & Chandon Bar, treatments at the spa come with an extra cost.

Of note, any passenger on a Norwegian ship visiting Great Stirrup Cay can sign up for a spa treatment at Silver Cove’s Mandara Spa — you don’t have to be renting one of the villas. In that respect, it’s sort of a backdoor into Silver Cove.

A final piece of Silver Cove is its ritzy reception building, which has a decidedly South Beach Miami vibe with wispy white curtains, white walls and creamy-white furniture. Passengers who have booked a Silver Cove villa check in at a dedicated desk at the entrance to Great Stirrup Cay and are whisked to the reception building on a private shuttle.

Acquired by Norwegian Cruise Line in 1977, Great Stirrup Cay is located about 62 miles from Nassau, the Bahamian capital on the island of New Providence. It’s included as a day stop on many Norwegian sailings in the region and gets occasional visits from Regent Seven Seas Cruises and Oceania Cruises ships. All three lines are owned by the same parent company, Norwegian Cruise Line Holdings.

Want to learn more about Norwegian? Make sure to subscribe to TPG’s flagship podcast, Talking Points, for an exclusive interview with the CEO and president of Norwegian Cruise Line, Andy Stuart. The episode releases on Wednesday, Dec. 4.