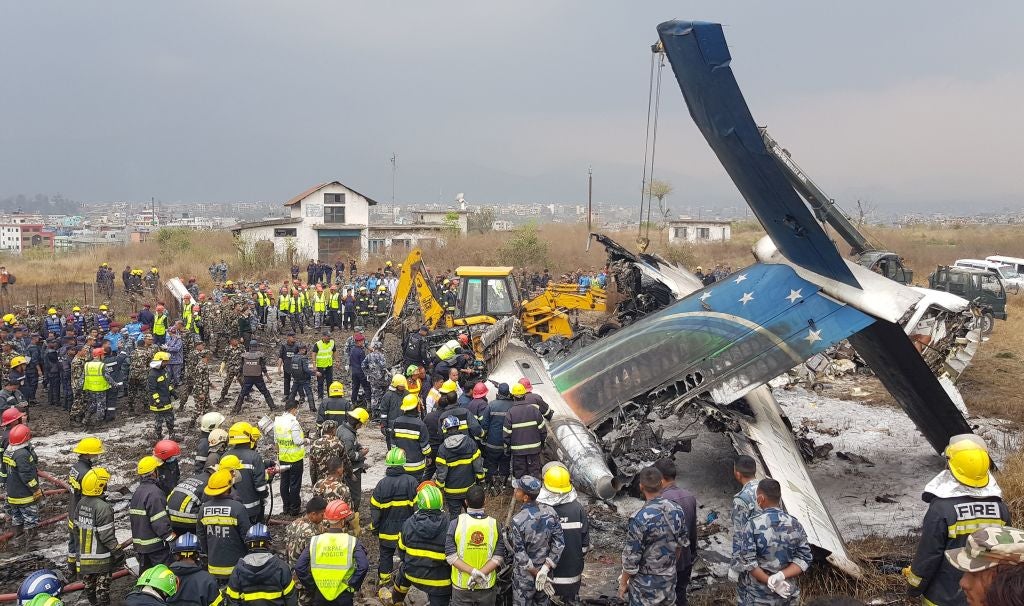 According to the Nepali government's official investigation, the flight's pilot, Captain Abid Sultan, was harboring extreme mental stress and anxiety that led him to make mistakes on the flight and ultimately led to the fiery crash that killed 51 people on board, the Katmandu Post reports.

Investigators say that for the duration of the one-hour flight from Dhaka (DAC) to Kathmandu, Sultan showed signs of abnormal behavior that deviated from his normal traits. For instance, he was smoking frequently throughout the flight even though he had never stated to airlines he'd worked for that he was a smoker, the report says, leaving investigators to conclude he was distressed behind the aircraft controls.

“When we analysed the conversation on the Cockpit Voice Recorder, it was clear to us that the captain was harbouring severe mental stress," investigators wrote. "He also seemed to be fatigued and tired due to lack of sleep. He was crying on several occasions.”

The voice recorder also captured other distressed moments like Sultan saying “I don’t f---ing care about safe flight, you f--- your duty,” and an hour-long conversation he had with his co-pilot that investigators say demonstrated he was lacking situational awareness and several abusive statements about a female colleague who was also a co-pilot with the airline. The female colleague had called the captain's reputation as a flight instructor into question, which upset Sultan. He can be heard on the cockpit recorder saying he was “very upset and hurt by the behaviour of the female colleague” and that “she was the only reason he was leaving the company.”

Investigators said Sultan, who was a Bangladesh-based pilot with US-Bangala, had verbally expressed that he wanted to resign from the airline the day before the crash, although no paperwork on the matter had yet been filed.

Under regulations from Bangladesh's Civil Aviation Authority, all of the nation's pilots are supposed to undergo an annual medical examination. But, experts say that some pilots avoid treatment for mental health issues for fear it will negatively impact their careers. The report says that Sultan had briefly been removed from flying duties while serving in the Bangladeshi Air Force in 2002 due to symptoms of depression, but he was reinstated after another psychiatric evaluation. None of Sultan's medical reports from the three years he worked at the airline noted any symptoms of depression.

The government report also details how the crash unfolded. The twin-prop Bombardier Dash 8 took off from DAC at 12:30pm. At 1:50pm, the plane began its descent into KTM. Kathmandu's air traffic control asked the cockpit to hold over a point labeled “Guras.” The flight crew, however, did not follow the ATC's instructions.

When air controllers asked the pilot why it was not holding over the designated point, Sultan responded, "Holding will not be required in this case," according to the voice recorders. The report says Sultan then lit a cigarette with just under three minutes until the plane's initial landing approach. Investigators say this was "complacency and gross negligence of procedural discipline."

A series of events then unfolded that suggest both the pilot and the co-pilot became confused and disoriented of their surroundings. The aircraft was cleared to land on KTM's runway 02, but the plane veered to runway 20 and hovered 175 feet above the ground, causing ground proximity alarms to go off. ATC asked the pilots what they were trying to do, and they responded that they were attempting to land on runway 02.

The report says the plane then began to regain altitude and Sultan told his co-pilot he made a mistake, and both pilots continued to make several other statements that suggest they were disoriented to the runway's location. ATC became worried at that point and told the cockpit "takeoff clearance canceled," indicating the plane was no longer cleared to land.

The plane then flew just 45 feet above the ground, right over the airport's building that houses its domestic terminals, with the ground proximity alarm ringing out continuously.

The aircraft then touched down on the outskirts of the airport, with only its right landing gear hitting the ground, skidded to a crash and stopped in a nearby field. After six seconds, the plane's 2,800kg of fuel on board caused a fire to spark.

Investigators noted that the landing wasn't too hard, giving the 67 passengers and four crew on board a good chance to survive, but the quick-spreading fire took most of the lives, killing 51 people.

The report does not seem to definitively state whether this was just a case of a pilot disoriented due to mental stressors or a verified pilot suicide, like the Germanwings crash in 2015 in which the pilot intentionally flew an Airbus A320 into the side of the alps because he had mental health problems.