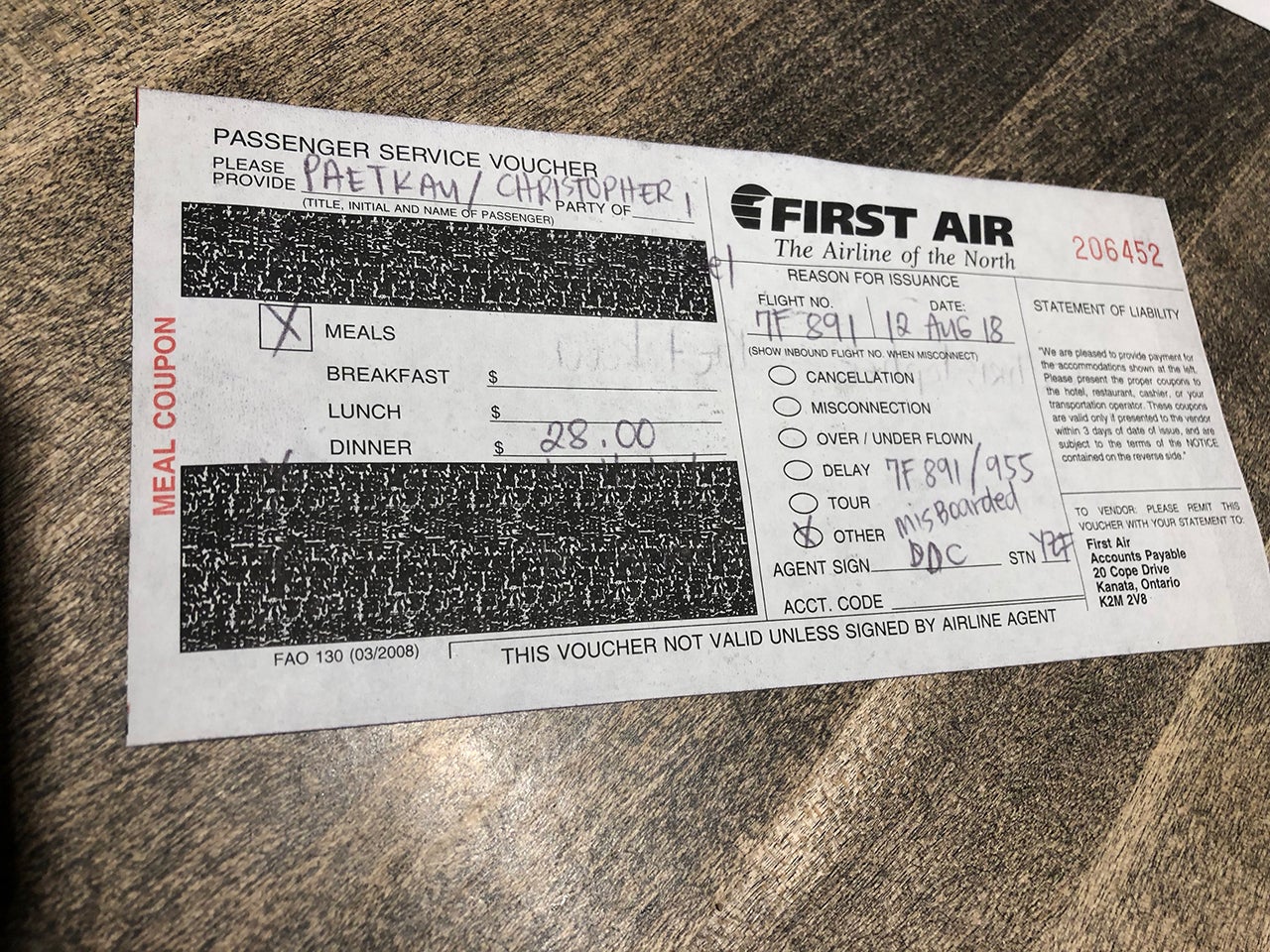 Misunderstanding Sends Man on Flight 1,700 Miles the Wrong Way
This post contains references to products from one or more of our advertisers. We may receive compensation when you click on links to those products. Terms apply to the offers listed on this page. For an explanation of our Advertising Policy, visit this page.

A Canadian man's two-hour flight turned into a 29-hour detour when a series of unlikely misunderstandings and mistakes sent him on a flight that landed more than 1,700 miles from where he was supposed to go.

Christopher Paetkau, a 36-year-old wildlife filmmaker from Winnipeg, Manitoba, was bound for Inuvik (YEV), a town in the Northwest Territories, after a brief layover in Yellowknife (YZF), the capital of the federal territory.

But when he boarded the First Air plane from the tarmac around 11:00am Sunday, it was the wrong one.

"The computers were down at the time, so they were entering things manually — they had a clipboard and were going through the manifest and checking IDs on paper," Paetkau said in a phone interview. "They were also doing three final calls for three different flights at the same time out of the same gate."

First Air's motto is "Fly the Arctic," and it turned out Paetkau very nearly did exactly that: Instead of boarding the ATR turboprop headed to Inuvik, 685 miles to the northwest, he got on a 737-200 headed for Iqaluit (YFB), the capital of Nunavut, more than 1,400 miles to the northeast and most of the way to Greenland.

It happened despite the fact that crew members checked his boarding pass and ID did a head count — it turned out that one of the passengers on the eastbound flight never showed up, and that the seat Paetkau took hadn't been assigned to anyone else.

"If that guy hadn't not gotten on, or if someone had been in my seat, they would've known I wasn't supposed to be there," he said. "It was just a weird combination of events."

But, still worried he'd gotten on the wrong flight, Paetkau asked a flight attendant where they were headed as he boarded — but happened to do so right after a jokester.

"The guy prior to me asked, 'When are we landing in Hawaii?'" he said. "So she had reason to think I was joking when I asked, immediately after, if we were heading to Inuvik."

It wasn't until the plane touched ground in Rankin Inlet (YRT), a 2,800-person Inuit village on Kudlulik Peninsula in Nunavut and 700 miles northeast of Yellowknife, that Paetkau knew definitely that something was off.

Once the crew and Paetkau sorted out what had happened, they had to figure out how to get him back to the Northwest Territories and his intended destination. The pilots said there were incoming high winds in Rankin Inlet, which meant Paetkau could be stranded there for a long time if he waited for the next flight west. So instead he stayed on the plane and headed the remaining 700 or so miles to Iqaluit, caught the next flight back to Yellowknife — where'd he'd begun the odyssey — and then finally got on the right plane to Inuvik, where he landed at 6:00pm Monday. First Air paid for his hotel room and a meal, and Paetkau said he's not holding a grudge against the crew or the airline.

"We're all buddies, and they handled this great," he said.

"Although we are happy that Mr. Paetkau was able to 'make the most of the situation,' in his words, and that we were able to make his unexpected journey as pleasant as could be with our staff, we take this matter very seriously and will continue to fully investigate this situation to see where protocols failed and review protocols where needed," First Air spokesman Dan Valin wrote in an email.

Paetkau said the airline has promised it'll make it up to him. He's a member of Aeroplan, which partners with First Air, but said he hasn't even begun to try to calculate how many miles he might've racked up with his unexpected detour.

He did, however, say that he came away a wiser air traveler.

"The takeaway is that air travel is kind of funny and fraught with all sorts of missed connections, and that these things happen," he said. "But the way you react is what's important, whether you're the airline or the person it's happening to."

"Also, instead of triple-checking you're on the right flight, quadruple-check. Check 10 times. Keep checking the whole flight. Ask the flight attendants every 10 minutes."

Editor's note: The story was corrected to describe the Northwest Territories as a federal territory, not a province.