First look: Memphis reinvents itself as a post-Delta hub with a new 23-gate terminal 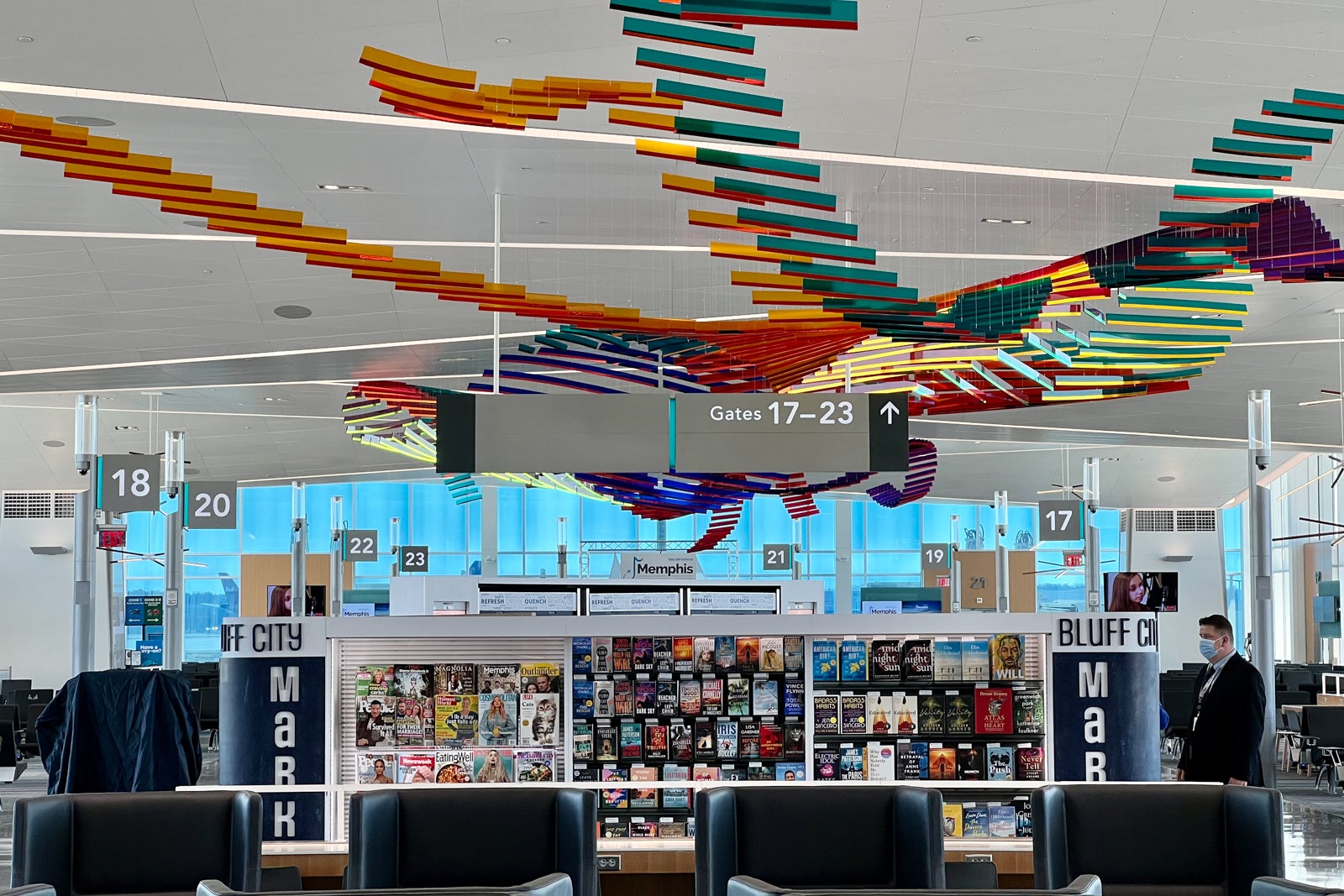 There are just 332 miles separating the airports in Atlanta and Memphis.

Both are among the South’s biggest cities and are located in a geographically favorable location for connecting throughout the region and beyond. But while Memphis once enjoyed a privileged position on the U.S. aviation map, it hasn’t been keeping up with the fast-growing Georgia metropolis that Delta calls home.

That’s underscored by the growth — or lack thereof, in the case at Memphis — at the two airports, which couldn’t be more different. While Atlanta continues to expand as Delta’s mega-hub, Memphis has trended the other direction (its cargo operation with FedEx the notable exception).

At the turn of the 21st century, Memphis was averaging around 550 flights per day, largely thanks to the big hub operated by Northwest Airlines. But, when Northwest was acquired by Delta in 2008, the combined airline inherited the Memphis hub, while still operating a massive operation in nearby Atlanta.

It took a few years (and the Great Recession), but Delta ended the airport’s sole long-haul transatlantic flight to Amsterdam in 2012, and officially closed the hub in 2013.

What was once a major connecting airport soon became just another pin on Delta’s route map. Passenger traffic at the airport declined for the next several years until it bottomed out at 3.5 million travelers in 2015. Nowadays, Memphis sees about 60 daily flights.

Since then, the airport itself has been working to reinvent itself as a destination unto itself. And that journey culminated on Tuesday with the opening of a big $245 million modernization project.

The reimagined Memphis airport is a massive upgrade in terms of the passenger experience. Gone are the narrow hallways, short ceilings and dark corridors.

The new concourse that opened on Tuesday is a light-filled masterpiece, with window walls that soak the hallways with a plethora of natural light. (But not too much sunlight — the windows automatically tint based on the angle of the sun.)

There are 23 gates in the new concourse, numbered from 1 to 23 (instead of the letter and number system of yesteryear).

The hallways have been expanded to over 100 feet wide, giving plenty of room for passengers to pass through the concourse. Plus, with the addition of modernized moving walkways, you’re never a few steps away from your gate.

“This is a handshake, a ‘Welcome to Memphis’ that we haven't had in 60 years… We're now real. We're now a modern, real player in the world,” Scott Brockman, president and CEO of the Memphis-Shelby County Airport Authority, told TPG in an exclusive interview.

You’ll be spoiled for choice when determining where to sit in the new concourse. Though there aren’t any new airline lounges, the variety of seating options is perhaps the new concourse’s biggest asset.

There are traditional gate-side seats, along with barstools, individual reclining pods and leather chairs. Each is outfitted with an AC outlet and two USB-A ports, as well as Qi-wireless charging mats to keep all your devices powered up.

The centerpiece of the new terminal is the rotunda that bisects the concourse. It sits between Gates 8 and 9, and is home to a variety of locally-inspired concessionaires (like Distillery District which featured Tennessee-made Jack Daniel’s whiskies), several food outlets and a children's play area.

The east leg of the new Concourse B is home to more gates, as well as additional seating areas and concessions.

Historically, Memphis had three passenger concourses (A, B and C) with 67 gates designed to support Delta’s hub and all the other carriers serving the city.

Once Delta pulled out, the airport quickly had a ton of excess capacity — along with some aging infrastructure.

Now, the airport is consolidating all flight activity to the new concourse, but it’s leaving room for further growth.

As of Tuesday, the 23 gates can accommodate about 6 million passengers, about 50% more traffic than MEM’s pre-pandemic levels.

Of course, that’s a lofty goal for the airport, especially considering that Spirit’s late-2021 announcement that it’s adding service there marked the first new airline to land in Memphis since Air Canada in May 2017.

The airport didn’t touch the west leg of the B concourse that splits off at the rotunda. That area will remain available for all inbound, non-pre-cleared international arrivals, if Memphis were to once again receive flights from such cities. (Air Canada’s Toronto service lands as a domestic flight thanks to immigration pre-clearance in Canada.)

Plans exist to modernize that part of the concourse, which contains 15 additional gates that could increase capacity to nearly 11 million annual passengers.

While the airport is closing the A and C concourses as part of its modernization, it’s retaining most of the gates for possible future use. The end of the C concourse will be demolished in order to facilitate more efficient taxing to and from the new concourse.

Essentially, Memphis is coming to terms with its new reality as a non-Delta hub, but it’s still leaving room for future growth should it be needed.

Bringing the latest amenities to travelers

Passengers traveling through the airport are the clear winners.

For one, they’ll enjoy 61 different art pieces from 62 artists, all of which are connected to the city in some way. For instance, the flagship piece located at the southwest end of the concourse is called “intertwining.”

Created by Yancy Villa, it’s designed to symbolize how Memphis is defined by the convergence of diverse people and ideas. Thanks to its favorable location at the crossroads of the Mississippi River and key highways and railways, the city has been a melting pot of cultures and a point of departure for decades.

It’s this idea that most resonated with Barrett Bowden, a Memphis-based Delta Diamond Medallion flyer who’s been passing through the airport since the days it was a Delta hub.

“The new terminal gives people the opportunity to really think about this city,” he told TPG as we chatted in the Sky Club before his flight. Bowden hopes that the new terminal will bring flyers together to get an authentic taste of what Memphis is all about.

In addition to the art, there are two lounges in the terminal: one dedicated to families traveling through the city for the St. Jude Children’s Research Hospital and another for members of the military.

There are two spaces in the new concourse for two future airline lounges, but no carrier has committed to opening one yet. (Delta’s existing Sky Club next to the entrance of the new concourse remains operational.)

Every traveler passing through the new concourse can use the small business center next to Gate 9. It features leather recliners, some high-top bar seating and a conference room that can be rented for meetings.

Another big improvement is the four new spacious restroom areas. They’re significantly larger and more modern than the ones they replace, and they each feature local artwork.

Last, travelers will enjoy an assortment of upgraded concessionaires in the new concourse, including Grizz Grill, themed after the NBA team Memphis Grizzlies, and an outpost of the Memphis Made Brewing Co., one of the most iconic breweries in the city.

The food establishments will be operated by HMSHost, while Paradies Lagardere will operate the retail space in the new concourse.

For now, much of the focus turns to filling the corridors with passengers. Between recruiting new air service and packing existing planes, the airport has its work cut out for it.

Brockman doesn’t think the airport will become a hub once again — point-to-point networks have become much more popular in recent years, especially with ultra-low-cost carriers.

So, his hope is that the airport will see expanded service to additional domestic and international destinations.

Instead of relying on a big network airline like Delta, the airport is banking on expanded service from Spirit and other budget carriers. Brockman even mentioned newcomers like Avelo and Breeze as possible new carriers.

That said, work isn’t done on the infrastructure — the master plans call for a modernized ticketing and baggage hall. Both opened around 60 years ago, and reflect the original design.

“My fear is this new concourse is going to make the 60-year-old terminal and baggage claim look that much worse. How do we take this progress and make the other parts of the terminal have the same futuristic feel,” said Brockman.

There’s no telling yet when the next phase of modernization may happen, but that’s not the focus right now.

At the moment, Memphis is enjoying its time in the spotlight once again — as it formally reinvents itself for the post-hub era.