Major hotel CEOs on why you shouldn't expect another mega-merger

Articles
Cameron Sperance is a senior hotels reporter at TPG. He covers anything to do with the hotel industry, from the guest experience to the business itself.
Follow
Sept. 21, 2022
•
6 min read 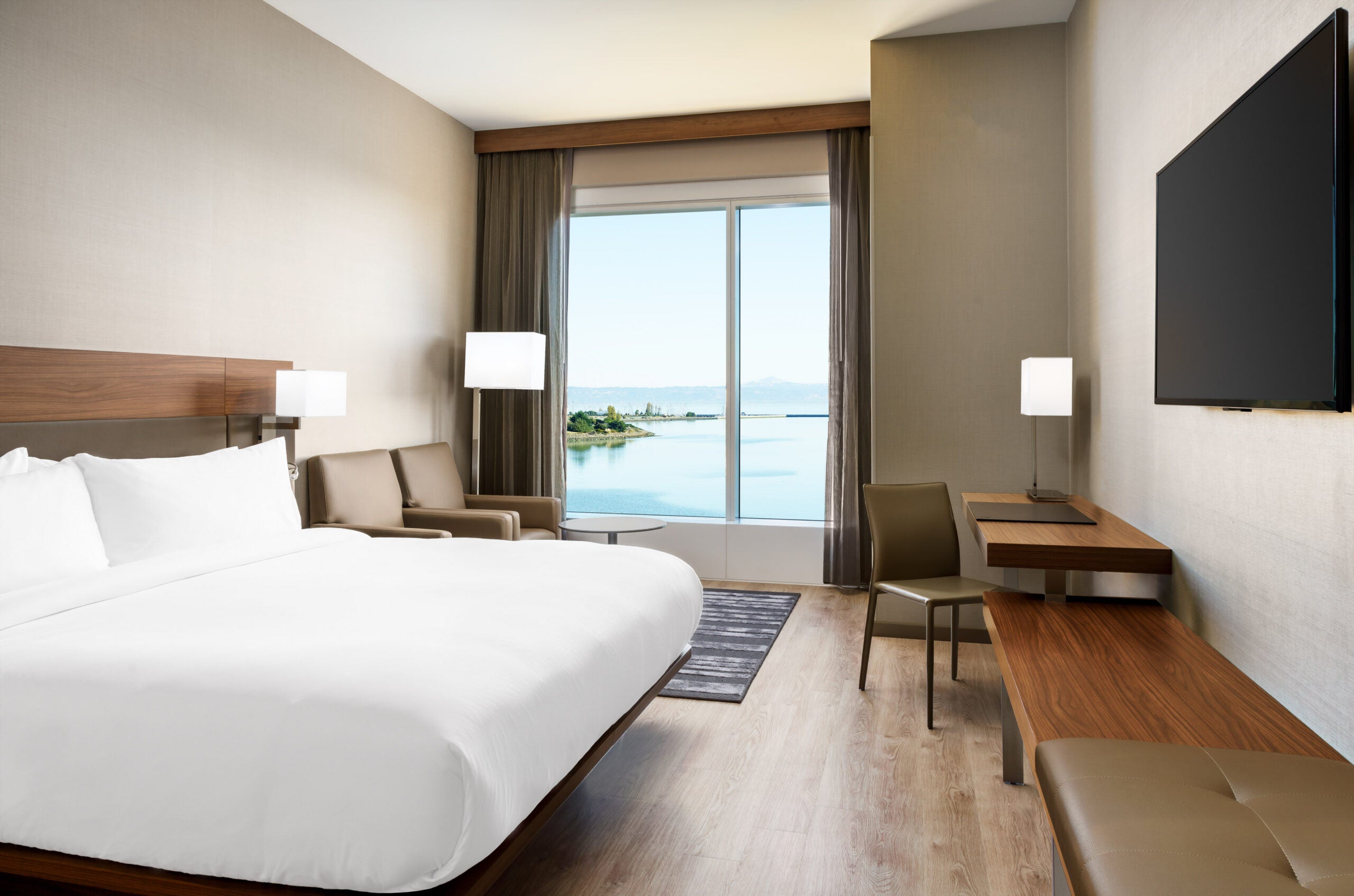 Major hotel CEOs on why you shouldn't expect another mega-merger
This post contains references to products from one or more of our advertisers. We may receive compensation when you click on links to those products. Terms apply to the offers listed on this page. For an explanation of our Advertising Policy, visit this page.

Instead, hotels will think about rounding out brand portfolios to give customers a full spectrum of options rather than risk losing them to competitors. In other words, hotel owners who don't operate an ultraluxury brand like St. Regis or Waldorf Astoria better add one. If not, they risk losing some loyal customers to competitors with several high-end offerings. Oh, and perhaps throw in a yacht or vacation home or two.

“It’s like rungs on a ladder,” IHG CEO Keith Barr said Tuesday at the Skift Global Forum in New York City. “If you’re missing rungs, it’s hard for customers and owners to go up that ladder.”

“If your objective is to catch as close to 100% of the share of your guest's travel wallet, you want to have enough scale that they never need to look outside your ecosystem,” Marriott International CEO Anthony Capuano said later in the day.

There is always speculation that brands such as IHG Hotels & Resorts, Accor and Hyatt might link up one day to better compete with the likes of Marriott and Hilton. However, it appears that era is behind the industry — assuming you can believe what hotel CEOs have been saying for several years now. Marriott and Starwood took years to integrate after their $13 billion merger in 2016 resulted in a portfolio of 30 brands, including St. Regis and Westin.

Instead, the industry currently appears to be focusing on smaller, bolt-on deals that provide a geographic lift in regions where a hotel company didn’t have a presence prior to the acquisition. These kinds of deals can also fill the gaps in a price segment of the market where a hotel company was previously limited.

On the geographic front, Marriott’s acquisition of AC Hotels gave it a lift in Europe while its Protea Hotels purchase expanded its reach in sub-Saharan Africa. With respect to market segments, IHG made inroads in the ultraluxury sector with its acquisitions of Regent and Six Senses as well as with more upscale soft brands like the Vignette Collection, aimed at bringing in more boutique customers.

There is also a business case for doing this, as it opens the doors to work with hotel owners who previously wouldn’t consider taking on a brand agreement with a company like IHG.

“It was like a puzzle,” Barr said. “We had the pieces, but we hadn't put them in. Now we have, and so it's just been amazing how it has transformed our ability to work with companies today and capital partners who weren't talking to IHG. It’s really, really exciting.”

Sometimes these expansions don’t even involve a traditional hotel brand. Marriott launched its vacation platform Homes & Villas after realizing it was losing business to vacation home platforms; before the acquisition, members of Marriott’s Bonvoy loyalty program didn’t have a whole-home option to earn and redeem points.

“Part of the reason we launched Homes & Villas [wasn’t] because we thought we'd go head-to-head with Airbnb but because, for various specific trip purposes — multigenerational travel, for instance — we heard from our web team members that a full-home, multibedroom experience better serves their needs," Capuano said.

For a long time, hotel industry leaders felt there was an either-or with respect to coolness and size. You could either be a cool, fashionable brand with just a few hotels or you could be a giant with reach around the world — albeit with a more sterile, less vogue feel at your properties. Some of the biggest hotel companies in the world now test that model.

Accor — the French hotel conglomerate behind brands like Fairmont, Raffles and Sofitel — last year took a majority stake in Ennismore, the United Kingdom-based lifestyle hotel company with brands like The Hoxton and Gleneagles.

Ennismore leadership, including founder and now co-CEO Sharan Pasricha, is still very much involved in maintaining the customer experience and keeping the ethos of the brand family. Accor leadership — including Gaurav Bhushan, CEO of Accor’s lifestyle and entertainment division and now co-CEO of Ennismore — largely focuses on operations, growth and performance.

The term “lifestyle hotel” can be a head-scratcher, but it’s usually a hotel that focuses more on design, experiences, and food and beverage. Think of those super-trendy neighborhood hotels that are way more inviting than dimly lit boutique hotels of the past. Accor and Ennismore define lifestyle hotels as those that make roughly half their revenue (or more) from food and beverage outlets. Smaller companies that operate these lifestyle hotels usually reach about 12 properties before meeting their maximum bandwidth for operations, Pasricha said.

“Or you're part of a larger group, but then you get lost in the system. I guess what we're trying to do is buck the trend,” he added. “We're really autonomous in how we operate. We’ve got independent culture. We've got a lot of our founders from the original brands very much involved.”

There’s always a bit of “sellout” backlash when a cool brand gets absorbed by one of the major hotel conglomerates. Kimpton was the poster child of the boutique hotel movement before IHG acquired it. Even Marriott had signaled it needed to help return the W brand to its glory days of being a mover and shaker in the hotel orbit.

One way the Ennismore team seems poised to maintain its grip on its customer appeal while expanding around the world is by having brand founders stay involved. Pasricha indicated the founders of brands such as 25hours Hotels and Mama Shelter should remain involved in executing the original property visions rather than shifting expansion duties over to Accor.

“To do lifestyle at scale hasn't quite been done before — not in a way that's truly not an oxymoron,” he added. “There's actually a tension between authenticity and scale and, if we didn't have the founders involved in the brands and if I wasn't the founder driving the product side of the business, I'd say it'd be challenging because lifestyle brands are hard to do. They're really hard to do.”

One cool big-brand conglomerate partnership is fading, however. TPG reported earlier this year Marriott and Studio 54 founder-turned-boutique hotel magnate Ian Schrager were ending their partnership on the Edition brand. The late Marriott CEO Arne Sorenson years ago indicated Edition’s success hinged on Marriott working with a visionary of cooler, smaller brands like Schrager.

“I have worked with Ian now for 12 or 13 years. I have such deep admiration not only for his creativity but his passion. He loves to create. He loves this brand,” Capuano said this week before finally acknowledging the partnership runway had its limits: “We did not renew our exclusivity with him. But again, we've got 15 active projects. Our teams are talking to him and his team every day, and he's as engaged and passionate as he's ever been.”

Featured image by MARRIOTT INTERNATIONAL
Editorial disclaimer: Opinions expressed here are the author’s alone, not those of any bank, credit card issuer, airline or hotel chain, and have not been reviewed, approved or otherwise endorsed by any of these entities.