Articles
Mimi Wright is in the social media department at The Points Guy.
June 04, 2022
•
9 min read 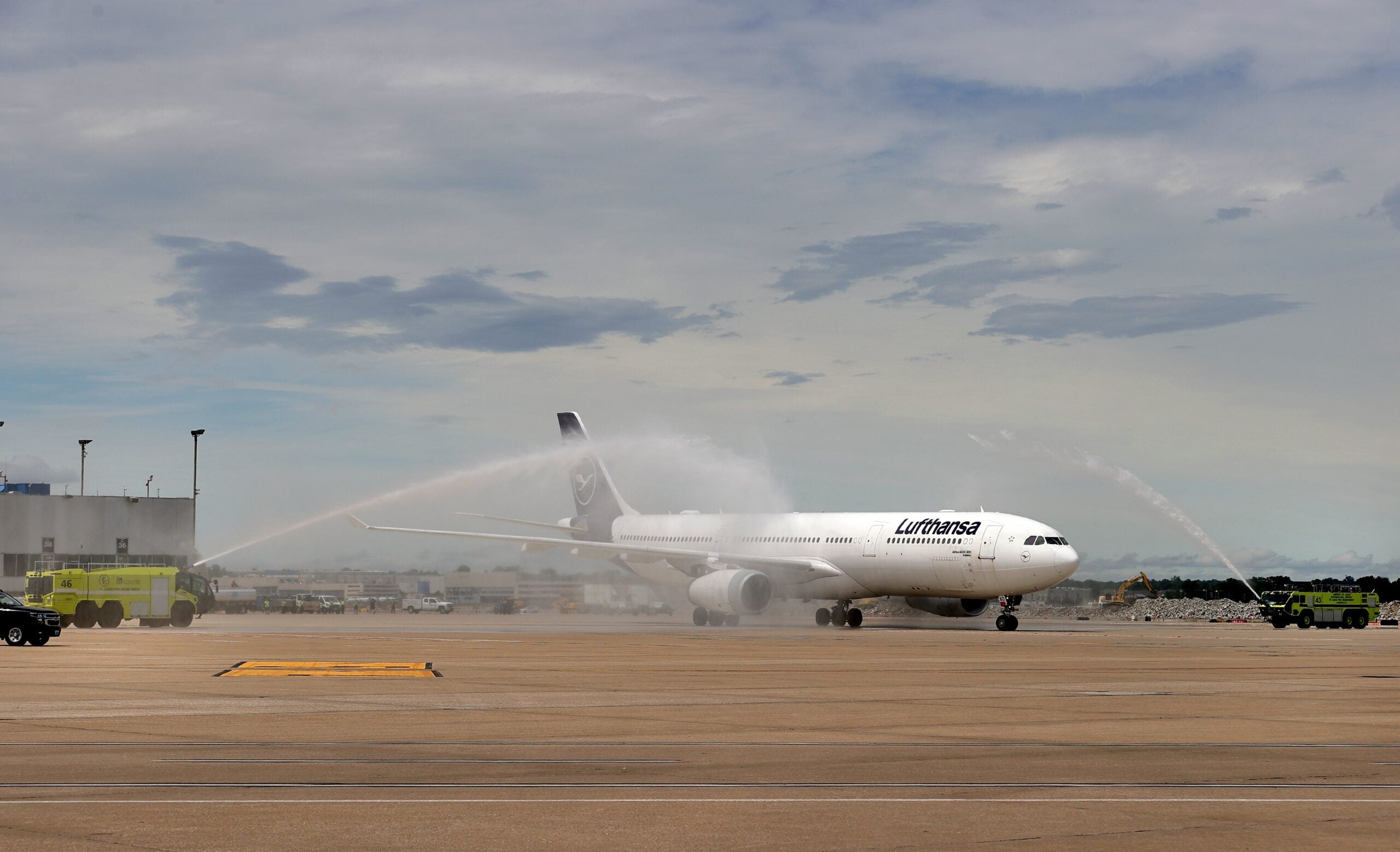 The German word "heimat" popped into my head as soon as I started writing this story. It’s difficult to translate it directly into English, but it’s essentially the feeling you get when you are home and comfortable. You feel warm and fuzzy inside, and the sensation usually resides in your stomach. As someone who received a college degree in German, that's how I interpret the word; it’s truly my favorite word in pretty much any language I’ve learned thus far.

But enough with the German lessons. Heimat is also exactly what I felt as I walked into Terminal 2 at St. Louis Lambert International Airport (STL) on June 1 for Lufthansa’s inaugural flight from St. Louis to Frankfurt Airport (FRA). The first part of the celebration was a press conference that took place near the Terminal 2 arrivals concourse, down a long hallway past baggage claim. I was actually familiar with the reception area because it's where I waited for my Global Entry interview.

Back in its heyday, St. Louis was a Trans World Airlines hub. In fact, I recently found an old TWA ticket jacket from my parents’ journey to London for my dad’s 30th birthday. The airline was acquired by American Airlines in 2001 and dissolved soon after. Once the airline was acquired after going bankrupt, traffic at the airport slowed and STL gradually faded from significance as transatlantic routes dried up one by one.

But when I walked through the doorway and into the inaugural celebration, where a cardboard version of the St. Louis Arch illuminated by blue lights greeted me, I felt nothing but pride. It feels like St. Louis is recovering some of its lost grandeur and heading into a new, more prosperous era.

The energy was palpable in the room as balloons in Lufthansa's traditional palette of blue, yellow and gold drifted in front of signs that read “Connecting St. Louis to the World” while airport and Lufthansa executives chatted and local media gathered. For the first time in nearly 20 years, St. Louis' airport will have transatlantic flights.

What the Lufthansa service looks like — and how to book it

As previously reported by my colleague Ethan Klapper, the new nonstop Lufthansa service is being operated with an Airbus A330. It now flies between St. Louis and Frankfurt three days a week, on Sundays, Wednesdays and Fridays.

A new era for the Gateway City

I’m the first to admit that I haven't always been the most positive about St. Louis. Despite growing up in a beautiful, picturesque suburb, I longed to be closer to the beaches and bustling cities along the coasts. I have a very tight-knit family that keeps me coming back to St. Louis multiple times per year. But after I moved to New York City, I never imagined going back there to live, especially given the dearth of nonstop international flight options that existed for much of my life. I simply wanted to be in a place from which it would be easier to see the rest of the world.

But now, I’m ecstatic for St. Louis to have transatlantic air service again because the city has so much to offer. I'm proud to be from a so-called flyover state in the Midwest. And once I saw the first Lufthansa flight arrive from Frankfurt to a water cannon salute, it truly felt like my hometown had turned a new page. As many speakers at the inaugural celebration said, St. Louis is now connected with the world and the world is once again connected to St. Louis.

Reestablishing a connection between 2 German communities

St. Louis has strong ties to Germany thanks to its historically large community of German immigrants. After an initial group of Germans arrived in St. Louis in the mid-1830s, more flocked to the city in search of land and employment, resulting in thousands of Germans resettling here by 1840, according to the city government's preservation records.

With the influx of Germans also came the introduction of German foods and beverages. In addition to classic Mitteleuropa dishes like schnitzel (thin pieces of fried meat), wurst (sausages) and brezen (pretzels), you'll find some of America's best beer (shoutout to ice-cold Bud Light) made in St. Louis.

Unsurprisingly, the city is also home to a host of multinational corporations, including Bayer (a German company that has its U.S. headquarters here) and AB InBev (the parent company of Budweiser).

Given St. Louis's connection to Germany, many local businesses subsidized the Lufthansa route, offering $5 million during the route's first two years if the airline meets the minimum service requirement. The inaugural flight from St. Louis to Frankfurt was full of German speakers, too, who were eager to be part of the celebration.

More than just a route

For me, this flight also has a personal dimension. It doesn't just get me from one place to another — it connects two homes, two heimats (if you will).

My ancestors come from the Black Forest, an area in southern Germany where the trees are deep green and the beer is sudsy and plentiful. Although I speak German somewhat fluently, I don’t have any current German speakers with whom to converse in my family. Still, I feel the connection to that heritage more deeply than I can explain. I share a middle name with my paternal grandmother, whose maiden name was Hofmeister. Despite only having a few months with her on Earth before she passed away from glioblastoma, I feel a sense of duty to represent the Hofmeister side of my family well.

So, in my early years, I took an interest in all things German. I began learning how to speak German when I was in sixth grade (German stuck, French most certainly did not). I kept studying the language and eventually was accepted into the German American Partnership Program, a high school exchange program between the U.S. and Germany, my sophomore year of high school.

Through GAPP, I was assigned to a German student, Isabella Huber, with whom I still speak to this day. We were pen pals for a little while before I had the opportunity to travel to her hometown of Hamburg and live with her family for three weeks. Due to the lack of direct flights between St. Louis and Hamburg at the time, I had no choice but to connect in Newark for that trip, sparking a challenging conversation with the Huber family as Newark and New York sound so much alike.

That trip to Germany was my first experience abroad — and it had such a profound impact on me that I decided to pursue a degree in German (in addition to my journalism degree) at the University of Missouri. With that degree, I was able to introduce my family to the Hubers in Hamburg during a college trip. Thanks to my connection with Isabella and my time in Hamburg, Germany quickly came to feel like a second home to me.

Even though Isabella was on vacation in Bali when I was taking the inaugural Lufthansa flight to Frankfurt, I'm excited to have a more direct way of reaching her moving forward. If all goes as planned, I'm hoping to see her again later this year, possibly with my family in tow.

While I'm thrilled to have a nonstop option to Germany now that Lufthansa is flying between Frankfurt and St. Louis, I'm hoping more international flights will come to STL soon. It would be fantastic to see a London route, but I'm biased, as it's one of my favorite cities. Or should I say "favourite" in this case?

As an American with a deep connection to her German heritage — like many St. Louisans — I couldn't be happier to have an easier way of returning to Germany, my home away from home. To be able to drink a St. Louis root beer under that paper arch before boarding and then cracking open a local beer in Germany after I arrived, all without the hassle of a connecting flight, was priceless.

And, hopefully, the first of many more occasions to take this flight as I travel back and forth between my two heimats.

Featured image by St. Louis Post-Dispatch
Editorial disclaimer: Opinions expressed here are the author’s alone, not those of any bank, credit card issuer, airline or hotel chain, and have not been reviewed, approved or otherwise endorsed by any of these entities.