Articles
Katherine Fan is a former senior travel features reporter at The Points Guy who covered everything from personal finance to travel and aviation.
June 28, 2019
•
10 min read 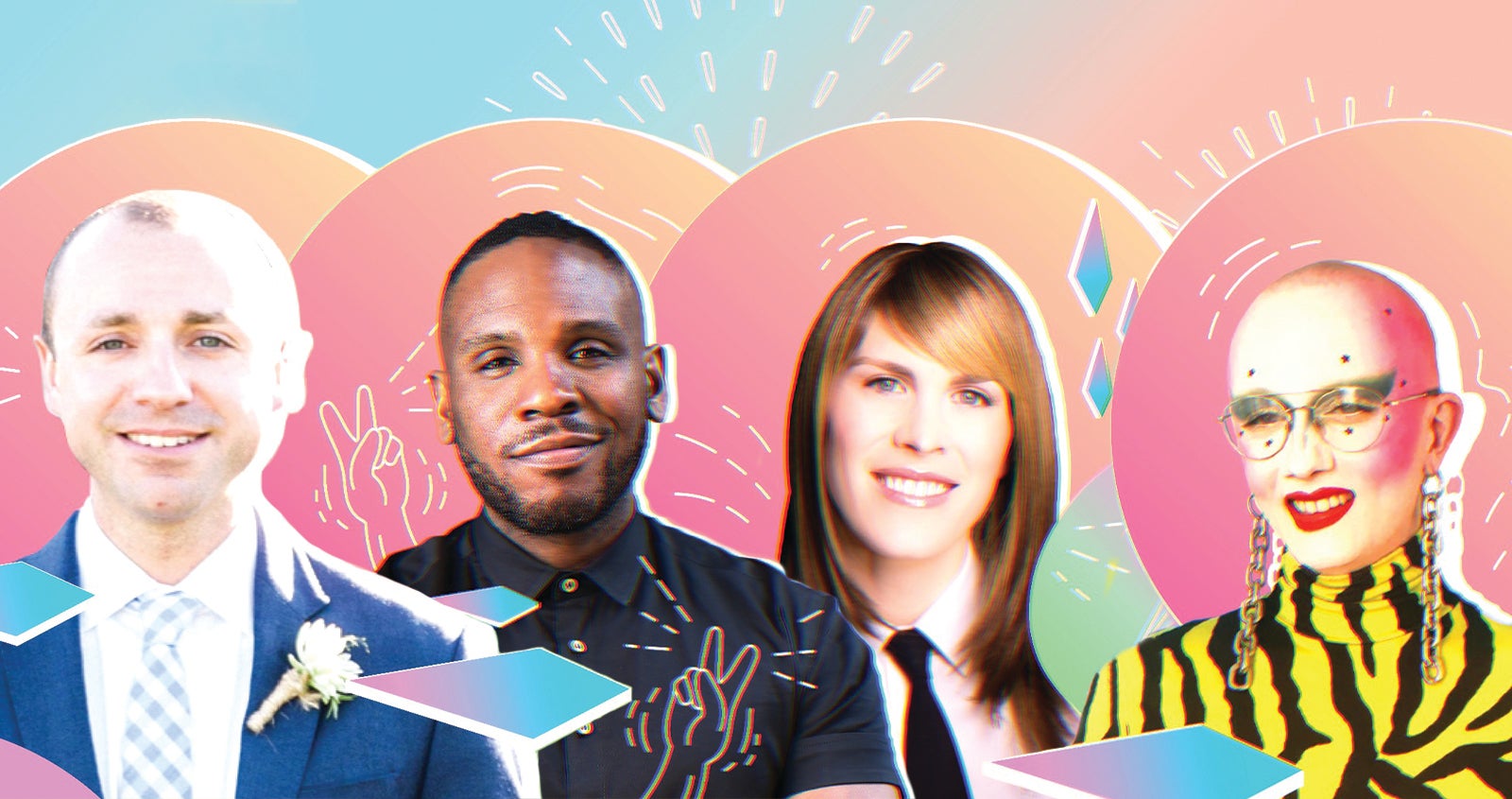 In travel and aviation, the LGBTQIA+ community faces unprecedented challenges.

Transgender pilots undergoing gender reassignments must endure extensive, degrading medical examinations and psychological self-reporting in order to maintain their licenses to fly. To this day, government documents that only allow for either a male or female selection force nonbinary individuals to sacrifice being authentic to the way they see and express themselves in order to be free to travel internationally.

And The Points Guy himself, and hundreds of thousands of other gay travelers, must exercise additional caution when traveling through certain areas of the world that actively persecute LGBTQIA+ (a common abbreviation for "lesbian, gay, bisexual, pansexual, transgender, genderqueer, queer, intersexed, agender, asexual, and ally") simply for being themselves.

In honor of Pride Month, The Points Guy is sharing the stories of four queer leaders in the travel and aviation industry who are using their voices to speak up on behalf of the community.

Jamie Windust is a freelance creative based in London whose pronouns are they, them and their. Windust is the editor-in-chief of Fruitcake Magazine, an award-winning print publication that gives voice to queer creatives. A writer, editor, model and actor, Windust’s career is as varied as their interests. A sought-after speaker for universities and consultants, Windust has spent a lot of time on media outlets such as the BBC as a voice for nonbinary people. Jamie began to identify as nonbinary four years ago.

When Windust’s passport expired toward the end of 2018, they needed to specify a male or female gender for the paperwork in order to successfully apply for a new passport — and neither option fit the bill.

“I was in a position where I either had to get a passport that didn’t align with my identification or do something about it," they told TPG.

Instead of walking away with a new passport, Windust launched an online campaign petitioning the United Kingdom to recognize nonbinary as a gender option on legal documents. As of the time of this publication, the petition has garnered more than 17,000 signatures and earned a formal response from the government, which acknowledged that the issue was one that affected many individuals.

Windust’s inability to travel abroad due to a lack of international documentation has resulted in a “difficult situation to be in," especially since they're becoming increasingly popular on the speaking circuit.

“A lot of opportunities have to be turned down because I can’t travel abroad,” they said.

Instead of in-person appearances, Windust has reached out by relying heavily on Instagram and other digital platforms, as well as by publishing Fruitcake.

Windust has also used this opportunity to pursue more travel within domestic borders. Windust primarily chooses Airbnbs and, as a train enthusiast, enjoys packing a bag and making a point to “not decide where I’m going until I get to the train station.”

“But for little getaways, I like to stay within 100 miles of London.”

A pilot whose pronouns are she, her and hers, Jessica Taylor is an advocate for transgender rights within the aviation industry. Her work has been featured on CNN and in The New York Times and other major media outlets.

Taylor was a 20-year-old engineering student when she drove past a banner ad for Long Beach Airport in California. Just hours later, she found herself flying over the Pacific Ocean near Catalina Island in a Cessna 172SP she'd bought tickets for on a whim.

By the time she landed, Taylor was head over heels in love with the experience of flying and immediately began studying for her pilot’s license. In 2008, Taylor quit her desk job and began pursuing a full-time career in aviation. Upon graduation, she worked as a flight instructor in Southern California before joining Great Lakes Airlines, where she began her career as a pilot in a Beechcraft 1900D. Today, she is an Embraer ERJ175 pilot for United Express on Vail, Colorado, routes.

“Global aerospace diversity is extremely important for every company,” Taylor told TPG. “When someone is able to live freely as the person they are without fear of retribution, companies will find that employees become more attached to that company and become more productive.”

Brian Gambino is a full-time Airbus A320 and A321 pilot for JetBlue whose pronouns are he, his and him. In his downtime, Gambino serves as the director of corporate relations for the National Gay Pilots’ Association, the world’s largest organization of LGBTQIA+ individuals in the aviation industry, and he will become the president of the NGPA in February 2020.

“I grew up under the final approach path for Runway 22L at New York’s John F. Kennedy International Airport,” Gambino told TPG. “Since before I could walk, my parents said I was always pointing at the planes as they passed overhead on their final approach to JFK.”

As Gambino grew, his knowledge of aircraft increased, but he never lost that sense of wonder and fascination. After his parents gave him a discovery flight for his birthday in his teens, Gambino said he “knew without a fraction of a doubt” that he “was meant to be in the sky!”

As a full-time pilot for JetBlue, Gambino primarily pilots transcontinental flights between the West Coast and JFK, his home airport. Outside of his day job, Gambino spends a significant amount of his time working with the NGPA.

Gambino credits his parents, husband, family and JetBlue for giving him a foundation of “dignity, respect and love” in his life’s mission of inspiring humanity to laugh, feel welcome and appreciated, and ensure that everyone around him has a better day because of their interaction.

“A major issue in today's travel world is how wrapped up people can be in their own [lives]” and personal reasons for traveling, Gambino told TPG. “My hope is that people take a break, stop and observe their surroundings. The world is worth exploring, not only for the sites you see and the places you visit, but also for the people you meet along the way."

As the executive director of Rainbow Railroad — a nonprofit organization that supports LGBTQIA+ refugees seeking asylum from state-enabled violence, murder and persecution — Kimahli Powell (whose pronouns are he, his and him) began his career intending to work in politics. But very quickly, he shifted his focus to the nonprofit sector, primarily targeting health and social justice issues facing the LGBTQIA+ community.

“When I travel, I remember how lucky I am,” Powell said. “Every time I travel, no matter the circumstances, I remember that I am privileged to travel with a Canadian passport that allows me to travel freely and without worry. For many of the people we help, getting [government documents] is almost impossible.”

Powell’s privilege extends to his home life, too.

“As a gay black man who was born in Canada but is from the Jamaican diaspora, I had a family that accepted me when I came out, which is not normal for many Jamaicans,” Powell told TPG.

Unlike many who consider travel to be a pursuit of leisure and relaxation, Powell travels primarily out of necessity: In his line of work, international flights are the norm. As executive director of Rainbow Railroad, Powell spends much of his time on the road, tirelessly pursuing justice for persecuted LGBTQIA+ individuals fleeing draconian regimes in places such as Chechnya and Brunei.

So far, Powell has doubled Rainbow Railroad’s growth, expanded its international reputation and reach and led the organization’s efforts to intervene in the crisis affecting LGBTQIA+ people in Chechnya.

“We get requests for help from all around the world from people who are facing life-threatening situations just because of their sexual orientation or gender identity,” Powell said. “We work with them to find a pathway to safety where they can live their authentic selves.”

Powell recently shared his insights about how TPG readers can best help Rainbow Railroad save refugees. “It’s remarkable how the donation of points can literally help save someone’s life,” Powell said.

(American Express Membership Rewards points, for example, can be transferred to Aeroplan and donated directly to Rainbow Railroad.)

“The unfortunate reality is that the LGBTQIA+ community is often used as easy targets when politics get tough,” he told The Points Guy himself, Brian Kelly. “I would love to see a world where people do not face imminent danger just because of who they love or [their] gender identity. Until we get to that place, Rainbow Railroad will be there to help.”

Rainbow Railroad is “a wonderful example of what happens when the community rallies together,” Powell said, adding that "100% of funds are from the community."

"We currently do not receive any government sources, and so that’s really motivating for me to be able to have helped build a movement that is fueled by people like you and all of the viewers who donated to you [and] your campaigns.”

“The ultimate driver of why I do this work is … the tangible result of knowing that someone who is facing a life-threatening situation is now safe in a new home,” Powell said. “Every time I hear that story or have the remarkable opportunity to meet someone that was affected by that, that makes it all worthwhile, and then that drives me to keep going. To everyone who might contribute to this campaign, know that your small investment will actually help save someone’s life.”