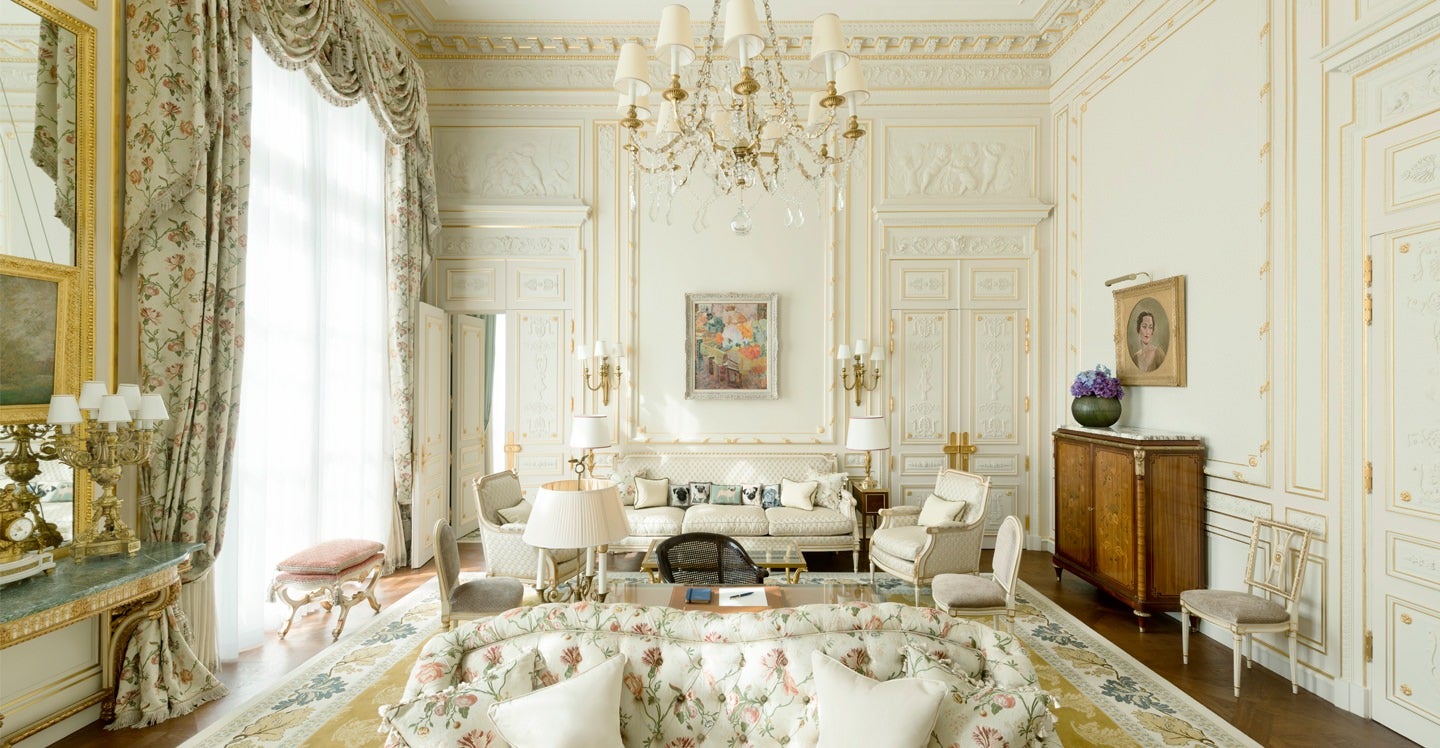 Leading Hotels of the World’s Leaders Club Goes Points-Based
This post contains references to products from one or more of our advertisers. We may receive compensation when you click on links to those products. Terms apply to the offers listed on this page. For an explanation of our Advertising Policy, visit this page.

Though it's not one of the hotel groups we cover frequently on The Points Guy, Leading Hotels of the World is an association of 400+ luxury hotels spread over 80 countries around the world. The collection includes historic hotels, castles, safari camps and private islands, most of which are family owned and independently managed. In order to join, a hotel must be nominated by an existing member hotel and demonstrate “remarkably uncommon” attributes, such as distinct architecture or notable history, world-class restaurants or distinctive wellness offerings.

Among the current members are The Ritz London, Ashford Castle in Ireland, Nihi Sumba (a TPG favorite) and the Greenwich Hotel in New York City. The association dates to 1928, so this year marks its 90th anniversary. As part of Leading Hotels of the World’s look to the future, it is overhauling its Leaders Club loyalty program. The big news: Leaders Club is now a points-based loyalty program. But there are other major changes afoot as well.

“We worked hand in hand with our most loyal guests to co-create a program that addresses their key needs and creates lifelong loyalty with guests who are looking for the type of hotels and experiences we provide,” said to LHW’s Senior Vice President and Chief Marketing Officer, Shannon Knapp.

To create the new Leaders Club, LHW incorporated feedback from focus groups, individual interviews and quantitative analytical research, Knapp said. Members expressed a desire for recognition during stays and personalization of their experiences, but also for benefits that would be more exclusive and differentiated from elite or credit card benefits offered by the major hotel chains. Leaders Club also looked for a way to enhance the rewards available to its most loyal customers, i.e. their highest spenders.

Here is what the program will look like starting now.

Perhaps the single biggest evolution of the Leaders Club is that there will now be a points-based earning and redemption system whereby members can rack up points based on their stays at member hotels and then redeem them for free nights. Here are the details of that and other program features.

How the points work: Members will now earn one Leaders Club point for every $1 (one US dollar) they spend on their hotel room, for up to three rooms on the same reservation. Award nights will be redeemable starting at around 4,000 points. Members will be able to redeem points for both standard and higher-level room categories. Redemption levels will vary based on published room rates for the specific dates of a booking, and will not be offered by category or tier, like with the larger hotel loyalty programs like World of Hyatt and Marriott Rewards.

Members will also be able to redeem their points directly online, just like booking a room, making the award reservation process more streamlined than previously.

Membership levels and fees: Like the old Leaders Club program, in order to even join, you will have to pay an annual fee, which has gone up from $150 per year to $175 per year.

There will be two main membership levels, both of which cost $175 per person per year. To reach the higher Sterling level, you must spend $5,000 on qualifying stays during a calendar year and pay the same $175 membership fee. Upon requalifying for Sterling, members receive a 5% annual renewal points bonus on their qualifying spend in the previous year. That means if you spend $10,000 in a year on stays and hit Sterling again, you will receive 500 bonus points.

Savings and previews: Members have access to members-only seasonal sales with discounts of up to 50% at participating hotels and “First-Look” offers at new hotels like the Mr. C Seaport in New York City (opened July 2018) and Hotel Lutetia in Paris (also July 2018) that include airport or train station transfers, guaranteed upgrades and flexible check-in and checkout times.

Leaders Club Insider Experiences: LHW curates special experiences for Club members aimed at immersing them in the destination and local flavors. Recent examples have included a private tour of the Barnes Foundation and a chef’s table dinner with an eight-course tasting menu at La Croix when staying at The Rittenhouse in Philadelphia.

The old Leaders Club was an interesting case. As mentioned, you had to pay for membership and there were no points, but you could earn free nights based on your stay activity.

The single biggest change to the Leaders Club program is that members can now earn and redeem points for stays.

However, there were some quirks to how you could earn and redeem these free nights. On the positive side, you did not have to complete your qualifying stays within a year or other time frame. As long as your account remained active, your stay credits would not expire. Free nights expired one year from the date of issuance.

Among the limitations, you had to stay in at least two different member hotels as part of your qualifying activity. The biggest constraint, however, was that you could only redeem one free night per stay. So even if you had racked up several of them and wanted to redeem them for a single multi-night stay, you could not.

Now, it looks like there are no such impediments. Earn points based on spending, then redeem them for available rooms in whatever way suits your needs best.

Though the exact redemption rates will fluctuate based on paid room rates, Knapp gave two specific points-to-dollars examples that indicate points will have a value of around 0.7 – 0.8 cents apiece. We’ll have to see how rooms start pricing over the next months to start nailing down data, though.

The most significant change to the member benefits package, however, is the fact that Club members can count on one confirmed room upgrade per year that they can choose to apply, and Sterling members get five. According to Knapp, “Ninety-two percent of the Leaders Club members we spoke to during this process told us that room upgrades were an important loyalty benefit to them and that they valued the peace of mind knowing in advance that they would be upgraded when they arrived on property.”

These upgrades can be applied to move up one level of accommodation, though if that level includes the jump from a room type to a suite type, it will be at the individual hotel's discretion.

This one benefit can translate to hundreds, if not thousands, of dollars in potential savings. For example, a Superior Room at the Hotel Ritz in Paris is going for $1,168 in November. If you used your confirmed upgrade and booked an Executive Room, you’d be getting another $117 in value. Per night. That’s almost the annual fee for Leaders Club membership each night.

How It Stacks Up

The new Leaders Club program has some hallmarks that look familiar to the programs of major chains like World of Hyatt, Hilton Honors and Marriott Rewards. For a point of comparison, here is how much a general member in the following programs would have to spend to earn enough points for a low-category award night and how much for a top-category award night.

Note that for Marriott, we are looking at the new “standard” pricing that is in effect now and that will become the average price between off-peak and peak awards in 2019.

As you can see from the table, Leaders Club requires a lot more spending even to rack up the points necessary for an award based on the rates released so far. However, the redemptions at the higher end are on par with the other loyalty programs, which makes sense given that these are luxury hotels we’re talking about. It remains to be seen how points rates will fluctuate according to published paid rates, and whether this will affect the value proposition going forward.

The other main benefit to look at is those confirmable pre-stay upgrades. Here’s how they stack up compared to those offered to top-tier members of the other three programs.

As you can see, not only are the qualification requirements generally simpler and cheaper for Leaders Club Sterling level, but its five confirmable upgrades per year simply blow the rest of the programs out of the water, with the exception of World of Hyatt, whose four confirmed upgrades can be redeemed for suites and on stays of up to seven nights each.

Keep in mind that you can also get some similar benefits like free breakfast and room upgrades when booking through Amex Fine Hotels & Resorts. However, if you're looking at a property that participates in both Amex FHR and Leaders Club, now you may want to book through Leaders Club to earn points in that program on top of the perks, though you may be giving up the $100 on-property credit offered with many FHR bookings.

We are likely to see Leaders Club continue to evolve as the new earning and redemption rates go into full effect and kinks are ironed out. From the first look at the program, however, Leading Hotels of the World has made some huge improvements.

Not only has it created a simple earning-redeeming formula for award nights, but the elite benefits of complimentary breakfast and upgrades that are confirmable at the time of booking present tremendous potential value to members.Overall, these changes seem very positive and targeted at improving members’ on-property experience.