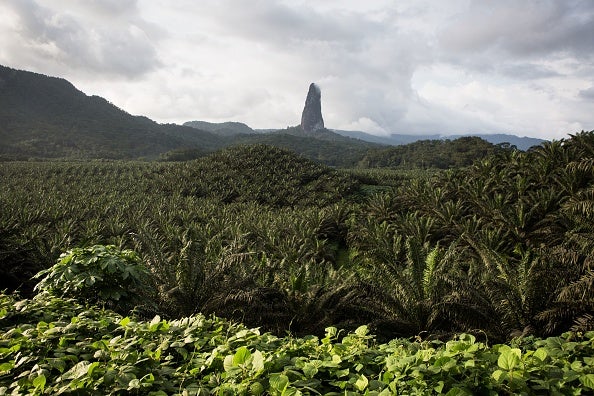 In 2018, writer Jada Yuan was chosen out of some 13,000 applicants to hit the road for a year, traveling to 52 destinations selected by The New York Times.

When it comes to favorites from the trip, which she had zero input planning, Yuan told The Points Guy, “When you travel like this and go to so many places in a year, superlatives just don’t make sense.” Despite the three-day trek from Italy, however, her time in São Tomé and Príncipe (a dual-island nation off the west coast of Africa) stands out.

Although she traveled economy the whole way, she admits to having a soft spot for Emirates when it comes to airlines, prefers Global Entry to TSA PreCheck, will check her bags rather than carry them on any day, is definitely a window seat gal and relied on her Chase Sapphire Reserve to get her through the trip (she started with the Citi Prestige, but it quickly got the boot due to a low spending limit on a very high-expense trip).

She earned Gold status on American, and although she couldn’t book travel herself, made sure to take advantage of the former Starwood and Marriott rewards programs whenever possible.

The journalist recently wrapped up her year on the road and handed the baton to her successor, Sebastian Modak. Here are a few things she learned along the way.

In the Moroccan port city of Tangier, that meant clothing that would help with the heat but was also culturally appropriate.

“Tangier is a pretty cosmopolitan place, but I didn’t have a lot of clothes. I had one dress that was appropriate for the heat and culture, just above the knee, but I maybe would have had an easier time not getting harassed if I covered up my knees. It was the only place I felt harassed,” said Yuan.

“I packed three pairs of shoes: hiking boots, which were warm and waterproof and had traction; Reef flip flops; and Altra sneakers which were like clouds.”

The best thing Yuan ate during 52 weeks on the road was in Bogotá, Colombia.

“I had this dish from Cali, in the south ... There’s a fruit called the lulo. It’s kind of like a kiwi and green tomato. They make a drink [with it] called the lulato. A lulo is too tart to eat by itself, but chopped up into a thick smoothie with a little milk and sugar and it’s one of the greatest taste sensations I have known. I had 10 while I was there.”

“I didn’t have room for snacks,” Yuan said. “I was hungry a lot of the time.”

There’s something to be said for living like a local, but the same is true for traveling like a tourist, according to Yuan. “I think you should see the tourist spots and check them off the list.”

“Every time I had trouble it was because I listened to locals too closely. You have to do your own homework. What works for locals won’t always work for you. Be cautious, but open.”

“I had the bare bones of what happens when I land, what activities are possibilities and then I just winged it. I picked what seemed interesting or went by a theme, like glass in Seattle or Tasmania for food."

“Trying to hit every place in one day is pretty exhausting and it doesn’t lead to pleasurable vacations or a sense of place. I didn’t have days off but had photo days. Those were my favorite days. I used my iPhone camera and a Sony RX100-V.”

“Get a rate on another site, and usually the hotel will match it. When you extend a stay, watch out for price increases (when booking online instead of in person). Small places can give you better rates over the phone than on sites like Booking.com.”

Yuan traveled with a Briggs and Riley Baseline International carry-on. And though it's not as common, she purposely packed a two-wheel bag.

“It was sturdier when dragging over cobblestone and dirt roads. Plus, spinner bags are easier to steal. The case also made a good seat waiting for trains. It has taken a beating, but shows no sign of slowing.”

Yuan didn’t know she would be separated from her passport during her travels — which is one of the best reasons to apply for second passport. “My visa to China took three days to get while I was in New Zealand," Yuan said. "You have to physically give over your passport.”