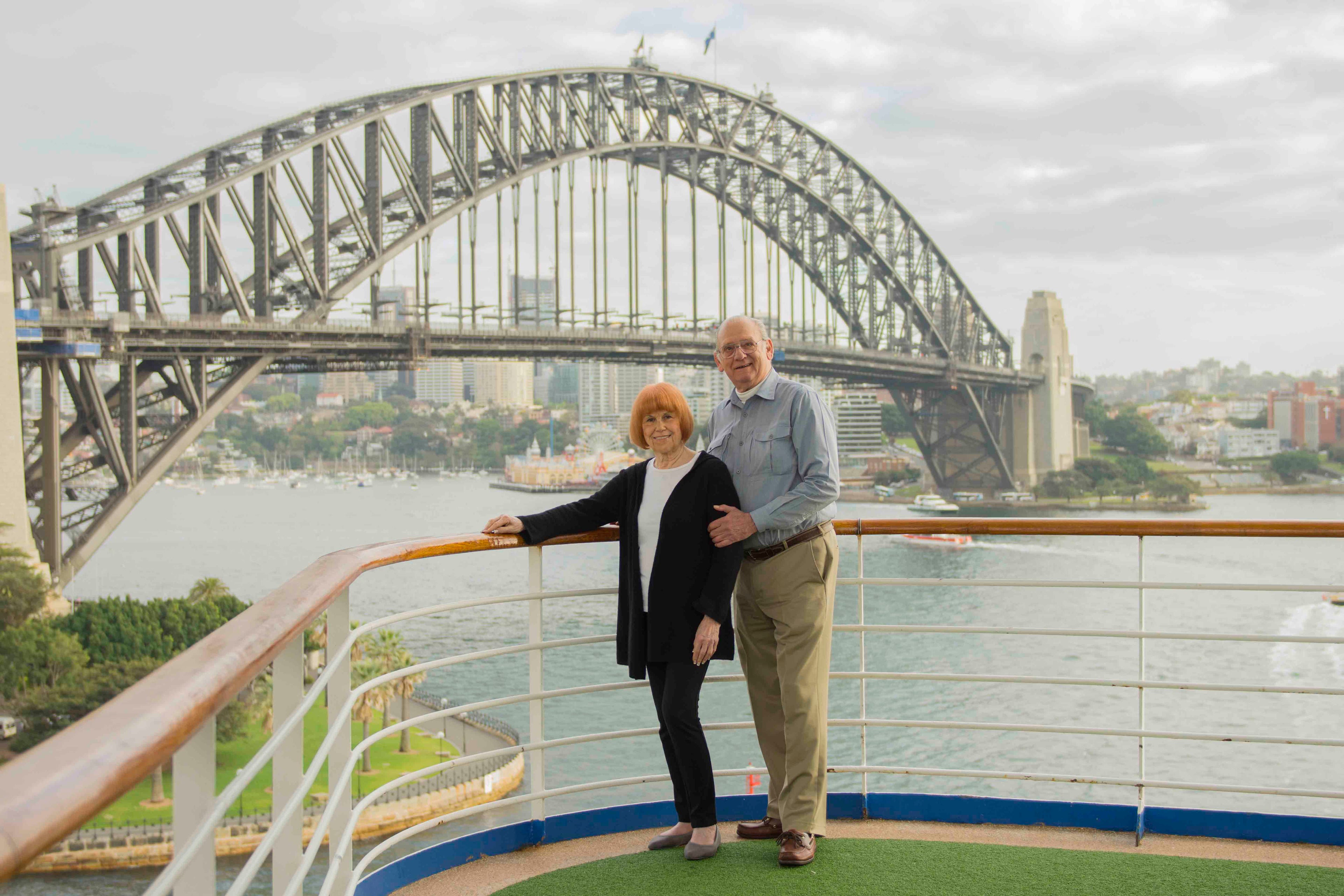 What It’s Like to Spend 7 Years of Your Life on a Cruise Ship
This post contains references to products from one or more of our advertisers. We may receive compensation when you click on links to those products. Terms apply to the offers listed on this page. For an explanation of our Advertising Policy, visit this page.

The 81-year-old retiree from Highland Beach, Florida, is like the seafaring equivalent of George Clooney’s character in "Up in the Air." She’s always either on a ship or just about to board. Since she retired about 30 years ago, she’s sailed on more than 300 voyages and spent thousands of days at sea. On Princess Cruises sailings alone, her tally is over 2,560 days — the equivalent of more than seven years.

“Yes, seven years. People like to say that to me,” said the retired mortgage banker, a growing legend in the cruise world who holds the record for most days at sea among current Princess passengers. “But it doesn’t feel like seven years of cruising. It went by like it never happened.”

Speaking to TPG from the 2,600-passenger Grand Princess as it traveled up the California coast, Weiner said she’s not quite sure how she got to this point. What began as a one- or two-cruises-a-year habit just slowly morphed into her current pace of spending around half of every year at sea.

She says she didn’t even know she was the most traveled Princess passenger until a few months ago, when the line celebrated her 2,500th day on a Princess ship.

“In the beginning it was to see the world,” Weiner says of her cruising obsession, which has taken her to so many countries she’s lost count. “Now it’s just a very comfortable lifestyle.”

Weiner doesn’t bother taking tours anymore in many of the ports she visits. She’s been to most of them multiple times. Sometimes she’ll just get off the ship for a short walk with her 76-year-old companion of the past two years, Carl Cutting.

The appeal of cruising these days centers around life on board, she said.

“We don’t participate in a lot in things [off the ship],” she said. “We sit and play word games during the day. We like to dress up for cocktails and dinner each night. We’re very old-fashioned cruisers in that way. It’s so hard when people ask me what I like about it,” she said. “I can’t just say I like eating and drinking. That sounds terrible!”

Like so many cruising regulars, Weiner also says she's drawn to the social aspect of cruising. She's always meeting new people on ships — some of whom have become friends for life — and the crew is like family.

“There’s just a lot more people to talk to than when we’re home,” she said. “You go to the bar and get to know the bartender, and then you’ll generally meet a lovely group of people around the bar. I’ve met people from countries all over the world on ships that stay in touch. We’ll meet up for lunch or dinner when we’re in the same place.”

Among the people she has met on ships in recent years is her companion, Cutting, a former mutual fund company executive. They met on the 3,080-passenger Crown Princess in 2017. She said, “It was a true 'Love Boat' experience."

Weiner says she also loves the idea that she’s constantly on the move, but rarely must pack or unpack or deal with many of the other little hassles of traveling.

“When I was younger, like everyone else, I did land travel. The bus left in the morning and you had to have your suitcase out early, and you were traveling all day. It was exhausting,” she said. “This is just so relaxed and laidback.”

And Weiner has never understood people who don’t like cruising. “What’s not to like? Somebody is cleaning for you. They prepare beautiful meals for you. They’ll do your laundry for you. You can get up when you want, and you can do what you want. There’s no schedule.”

But over the years, Weiner has seen a lot of changes in the cruise industry. For starters, ships have gotten less formal. She’s glad Princess still offers formal nights, though she suspects it’s a practice on the way out.

“The only time you can dress up now is on formal nights on a ship,” she said.

Weiner has also watched cruise lines roll out ever bigger ships. Initially, she was iffy about the trend. But some of the bigger vessels have won her over.

“You start seeing what new ships can offer you that older ones can’t,” she said, ticking off everything from bigger, more elaborate buffets to additional on-board restaurants, lounge and bars.

Still, Weiner’s favorite ship among the 17 in the Princess fleet (she’s sailed on all but one) is the one with the fewest amenities: the tiny, 670-passenger Pacific Princess.

“It’s just such a congenial group when you’re on that ship. Everybody knows everybody within a day or two of boarding, and the staff knows everybody,” she said.

Weiner’s love of cruising dates to an initial Home Lines sailing in the late 1980s with her late husband, Howard, who passed away in 2014. She’s also sailed on dozens of voyages with such lines as Celebrity Cruises, Holland America, Royal Caribbean, Crystal Cruises and Seabourn. But these days, she’s mostly loyal to Princess. She just finished her 291st cruise with the line and is booked on half a dozen more over the coming months. She’s also booked on Princess’s next world cruise, a 111-day voyage starting in January.

It was — believe it or not — a loyalty program that got her hooked on Princess. As her husband got older, he needed wheelchair-accessible rooms on ships, which are limited. Weiner found her top-tier Elite status in the Princess Captain’s Circle program helped her secure the stateroom they needed, because Elite members can lock in cabins before they open to the general public.

Other Elite perks include priority access to ship-to-shore tender boats; priority disembarkation at the end of a cruise; free laundry service; and complimentary shoe shines. But Weiner says she also gets some off-the-book extras as a result of her extraordinary cruise count. Just the night before being interviewed by TPG, for instance, she was invited to a private dinner with the Grand Princess captain in his private quarters — something that is very rare these days.

“It would have to be a phenomenal itinerary for me to go to another line,” Weiner said. “I have no status with them.”

In addition to Cutting, Weiner sometimes sails with her extended family. She has three children (all cruise fans) and seven grandchildren. When they’re not with her, she keeps in touch with them regularly by phone and email, something that wasn’t possible in her early days of cruising.

“I’d go three of four weeks without contact from anybody,” she said. “Nowadays, it’s a daily thing. It’s easier in that you know what’s going on [but] it’s harder because sometimes, you don’t want to know.”

Weiner knows she’s lucky to be able to afford a retirement that includes months of cruising every year. She didn’t tell TPG exactly how much she spends annually on voyages, but she says it’s not inexpensive, and she’s not immune to having to budget to make it work. So she watches pricing at Princess closely and pounces when there’s a deal. She’s also flexible about cabin categories. She books everything from basic cabins to top suites, depending on the price.

According to Weiner, there's no golden rule to getting the best deal. She says she usually books a cruise soon after it opens for bookings, so she has first choice of specific cabins before they begin selling out. But booking early can also bring extra perks.

“You’ll usually get some extra stuff like free drinks or [included] gratuities,” she noted.

Then again, if a cruise isn’t selling, there can be even better offers later, including in the final months before a voyage. But waiting for a last-minute deal is risky if you’re set on a specific trip, she said. The deal may never come, and you could end up paying a lot more.

One thing Weiner always pays up for is travel insurance that will reimburse her if she needs to cancel a cruise at the last minute.

“After you get stuck once, you realize insurance is important,” she said, noting she once lost the entire value of a cruise that she had to cancel due to an illness.

Weiner also pays up for official cruise line tours in ports instead of trying to explore on her own in a rental car or on an independent tour. That's because if a ship’s tour is delayed, the ship will wait for you. But if you’re exploring independently and you’re late, the ship might leave you behind.

“I’ve seen a lot of people over the years running down the pier as the ship is sailing away,” she said with a chuckle.

Weiner says she’s pretty much loved every minute of her cruising years. “It’s been a hoot. The whole thing has just been so much fun.”

Though Weiner may not have become a prolific cruiser until later in life, she began traveling the world when she was relatively young. And she urges other travelers not to wait. If you can afford it, she said, just start doing it. Even if you’re still working.

“You’ve got to make the time,” she said. “I’ve met a lot of people who say they’ll do it when they retire, but then they get an illness or something else happens and they can’t.” And she repeats a phrase she heard many years ago that has guided her through life: “Cover the Earth, before it covers you.”

Related stories
Why you should consider having both the personal and business Amex Platinum cards
Real ID requirements for air travel in US delayed until 2025
Another major cruise line to sharply hike onboard fees
Save money with these travel-related offers on your credit cards this month
Featured image by Ilene Weiner and her companion, Carl Cutting, on a top deck of the Princess Cruises ship Golden Princess while it was docked in Sydney, Australia. Photo courtesy of Princess Cruises.