Articles
Katherine Fan is a former senior travel features reporter at The Points Guy who covered everything from personal finance to travel and aviation.
March 11, 2020
•
8 min read 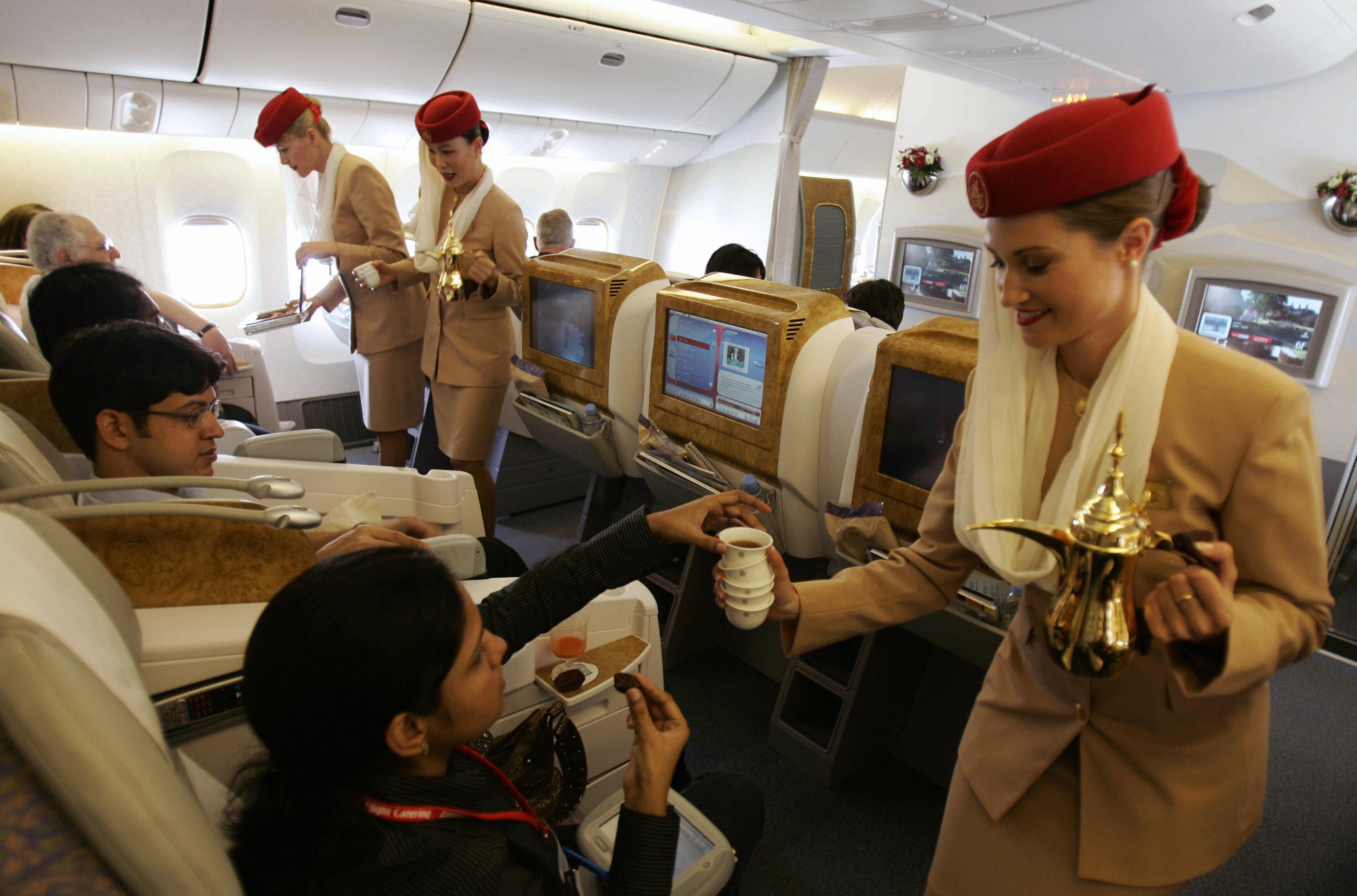 Here's how you can thank a great flight attendant on your next trip
This post contains references to products from one or more of our advertisers. We may receive compensation when you click on links to those products. Terms apply to the offers listed on this page. For an explanation of our Advertising Policy, visit this page.

Flight attendants are our unsung heroes of the sky.

From keeping us safe to making sure travelers make it home in time to say goodbye to dying family members, to dealing with our crazy interpersonal disputes at 39,000 feet, many don't get paid enough to put up with the drama they experience on a daily basis.

TPG Lounge reader Erica Pizzola recently asked our Facebook group members, "How do you reward flight attendants who you feel have done a great job?" Our readers had a lot to share.

It's the little things

Dozens of travelers told the TPG Lounge that they like to bring chocolates, Starbucks gift cards and similar small treats for their flight attendants. Many flight attendants don't get paid for the time they spend commuting to the airport or for unexpected downtime when trips are delayed on the ground, and many readers who are close to flight crew told the Lounge that little gifts that help cut down on their personal expenses are deeply appreciated.

Here are some of the many suggestions we received:

"Starbucks gift cards, lotion or room spray is what a flight attendant friend told me. They appreciate it all. Starbucks cards are simple (to use) in most domestic airports, and you can get a bunch at Sam’s Club for a discount. I also do bags of Costco-sized Lindor truffles to give the flight crew. Never hurts to be nice." — Su Chon

"A few weeks ago when I flew Cathay Pacific first class, I bought each of the two flight attendants that serve first class a Valentine‘s Day gift bag, they were really appreciated." — Kevin H.C. Chan

"Last year, three United flight attendants were warm, genuine and very professional. I gave one of them a stack of fancy chocolate bars to share (with the others). They individually stopped by to thank me." — Jan Brandt

"I always have Starbucks gift cards with me, and I give them away when I receive outstanding service." — Dejan Dragas

"[Whenever] flight attendants have morning flights around 6 a.m., they all stop for coffee at Dunkin' (Donuts) or Starbucks." — Heath Augustover

"I have a stack of Starbucks gift cards in my wallet for FAs. I’ve also brought individually wrapped chocolates for the crew." — Mary H. Burd

"Whenever I travel, I carry a batch of little sticky-backed cellphone pockets with my business card and a thank-you card tucked in. They are a handy little gift and I give them away to ticket agents, flight attendants, cab drivers or anyone who has been especially kind or helpful." — Eva Braiman

"I always have thank-you cards and Starbucks cards with me." — John Schmidt

"Kindness and a $5 Starbucks card goes a long way. My sister is a one-year flight attendant with American, picked up as many flights as she could last year, and made under $30,000. Factor in that she is not based in the city she lives, she has to pay for a “commuter” place because she is always on reserve (standby), (and) she has to pay for transportation to/from the airport. She barely nets enough to live on. She does it for the love of travel." — Robin Palmer

"I carry very large chocolate bars with me and often give them out as thank-yous. I give them to flight attendants, gate agents, and even bathroom cleaners at the airport. People are so excited to be acknowledged — it is really fun. I fly a lot, so I often see some of the same airline employees." — Jennifer Dorr

There are a lot of ways to show your gratitude through words of appreciation. Most TPG readers suggested complimenting the flight attendants in person, then letting them know that the airline would also be hearing from the passenger. Some airlines also offer cards that can be distributed to flight attendants for exemplary service, which the flight attendants then can turn in to management in order to be recognized.

"Former airline employee here. I had a stack two inches tall of real letters that customers had taken the time to actually write. Management does take notice. I can assure you that it always made my day when I received the original personal letter that was written to me. Please never underestimate that gesture. I recently wrote two separate letters on a JAL long-haul. Just the thought that the flight attendants knew they were receiving letters brought a smile to their faces. Just do it. Never underestimate small acts of kindness. And also Tweet your experience." — Mary Crawford

"Thanks for thinking of us -- being nice, smiling and saying hello goes a long way, but I wouldn’t say no to a cup of coffee ????" — Joanne Parr Straud

"I flew nearly 30 years ago, and I still have the letters of commendation passengers sent to the airlines on my behalf. We didn’t receive anything other than kudos for them, but the sincerity of their appreciation meant a lot, and went a long way toward offsetting the multitude of difficult passengers you dealt with on a regular basis." — Michelle Fedder

"I tell them thank you, and also write to the company." — Kelly Albamonti

"With [Southwest], they have a reward system for their flight attendants. Frequent flyers can hand them a coupon and they can enter (it) into their system for gifts, etc. I don’t fly Southwest much any more, but on other airlines I definitely need to get better at thanking them." — Fuego Inspirado de Zataráin

"Delta gives you cards to pass out when you get good service; then the employee gets recognized by earning rewards. Also, Delta sends me a survey nearly every time I fly, so I can say if a particular staff (member) was good or not." — Ta Lia Krajcovic

"Email or tag the airline on Twitter. Name the flight and name of attendant, or describe them if you don't know their name. I always email the airline when [I] have a great crew; they are a rarity on [United], so I like to know they get recognized." — Shad Hardman

"Flight attendants are paid much less than you'd think," Heath Augustover told the TPG Lounge. "I'm married to a FA. Trust me; they do it for the love of it, they are passionate. Simply acknowledging them with a smile and thank you means the world. One time, my hubby got a handwritten letter from a passenger that just lost a family member and his professional and 'great' service lifted his spirit. The customer made sure he knew just how much the extra anything, his typical work, lifted his spirit. Easily the letter was the greatest gift he has ever received."

"I let Delta know, usually via Twitter, and also have some acknowledgement certificates Delta sends me each year. But the biggest thing, give them my sincerest thanks for making my day/trip a great one." — Andrew Fahsholz

"I shout them out on Twitter with the flight number. Still remember one I had on an AA flight to GDL." — Christopher Burge

"American Airlines sends out coupons to elite members every year to give to flight attendants; apparently the flight attendants use them to enter raffles to win money or free gifts from what I’ve heard. ...Their faces always light up when they get them, so they must be worth something. I always make sure to give mine out before their expiration date. The flight attendants are so appreciative when they receive them." — Andrea Mazzullo

"Send a letter to the airlines so it goes in their personnel file. They do hold a lot of weight." — Josh Christoper

"I like to have a short note with Starbucks gift cards ready to give to them." — Tracey Sellman Henry

"Easy: Thank them personally, and mention their name for an incredible service in a review — like [with] YuanYuan at Korean Air." — Renato Pizarro