How I Zoomed Across the US on a Private Jet, With Two F-15 Pilots 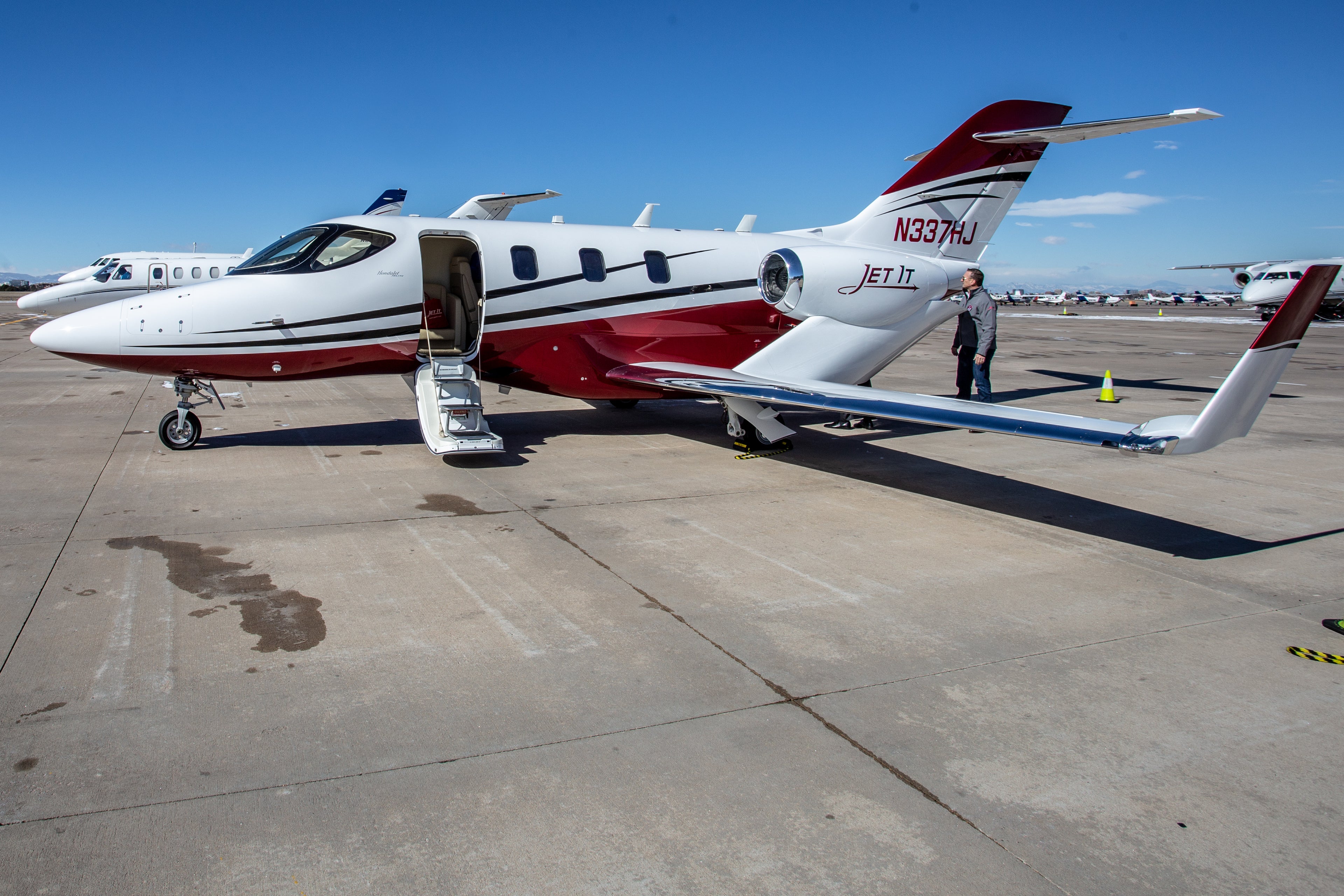 How I Zoomed Across the US on a Private Jet, With Two F-15 Pilots
This post contains references to products from one or more of our advertisers. We may receive compensation when you click on links to those products. Terms apply to the offers listed on this page. For an explanation of our Advertising Policy, visit this page.

You may not have seen a HondaJet Elite at an airport yet, but if you do, there's no mistaking it. The tiny airplane, seating up to seven, is the smallest business jet available, together with the Embraer Phenom. And it also may be the cheapest, with fractional-ownership operator Jet It offering it at $1,600 per hour for their owners — a sizable chunk of money, yes, but a bargain in private-jet terms.

Designed in Japan and assembled in Greensboro, North Carolina, the HondaJet may be small, but it can hit 500 mph at 43,000 feet. Fast enough that Jet It wanted to use its newest plane to attempt an aviation record: the fastest city-pair time between Denver and Atlanta ever recorded for a very light jet.

VLJs are a special category of airplane, also known as "personal jets," which can operate with just one pilot. They typically don't fly as far as bigger business jets; the HondaJet can make it as far as 1,800 miles. But they are jets all right, with all the speed and cachet that comes with it. So when Glenn Gonzales, the co-founder and CEO of Jet It, asked me if I wanted to join him on that record-attempting flight, I said yes on the spot.

Having to reposition a new HondaJet from the paint shop at West Star Aviation in Grand Junction, Colorado, to the East Coast gave Gonzales — a former F-15 fighter pilot with the US Air Force — the opportunity to attempt the record, while getting the freshly painted plane in place for its owners.

New livery for the Jet It HondaJet Elite. Photo by West Star Aviation

Gonzales was joined by James "Murph" Murphy — also a former F-15 pilot, and founder and CEO of consultancy firm Afterburner — in the cockpit: two CEOs on the flight deck of a private jet, instead of the back where they'd be usually found. It was clear however that these two CEOs preferred to be at the controls. Their excitement as they talked to other people and showed off the plane before our departure made it clear how much they were looking forward to taking the brand-new jet out for a flight.

Our flight plan was set to take us from Denver's Centennial airport (APA) to DeKalb-Peachtree airport (PDK) in Atlanta. We had clear skies as we readied the plane, took on fuel and went through the preflight checks. With no flight attendant on the tiny jet, Gonzales gave me a standard safety briefing himself.

After a short takeoff roll — the HondaJet Elite can get airborne in less than 4,000 feet — we lifted off from APA at 11:27 MST and climbed up to a cruising altitude of 39,000 feet, well below the plane's maximum, before dropping down to 37,000 to catch a better tailwind that would help with our record effort. I settled in to check out the interior of the HondaJet from my seat in the back of the cabin.

With an interior hight of only 4.83 feet, you won't be taking a leisurely stroll around the cabin to stretch your legs on a HondaJet, and more than a bit of ducking was required to get on board and to my seat.

Dimensions aside, the interior of the plane was well appointed with comfortable reclining seating, ample-sized tables and standard overhead lighting and air vents. The jet we flew was configured with five seats for passengers, four in the rear cabin and one jumpseat directly behind the flight deck. There was even a full lavatory onboard, not something normally found in this class of jet. With a cabin only 12 feet long, I could easily see into the flight deck from my seat in the back of the plane, with a good view of the large flight instrument displays.

Once seated the aircraft was perfectly comfortable. One of the biggest things I noticed immediately is just how quiet the cabin is during flight. The three of us were able to have conversations easily at a normal speaking volume while in the air. The HondaJet Elite is also equipped with push-button "dimmable" windows, like you would find on a Boeing 787 Dreamliner.

While the weather was crystal clear when we left APA, as we flew East the clouds started to build, slowly at first, but as we crossed the western end of Tennessee the onboard weather radar started to paint some more intense weather in our flight path. As we approached the Atlanta area, things were less than ideal.

You know the standard procedure for preparing to land: you feel the plane lose speed, flaps get extended, the landing gear drops and if all goes well the next thing you hear and feel are the wheels touching down on the runway. Our approach into PDK followed this standard protocol, until the last step. At an altitude of around 1,000 feet, and without having the airport in sight, Gonzales decided to abort the landing, and applied go-around power, giving me a taste of just how sporty the HondaJet Elite really is. Our flight data showed a climb rate of over 3,700 feet per minute out of PDK, a really steep climb.

After our climb out and a hard banking turn, we lined up once again for the approach into PDK, hoping that we might catch a break in the weather. Flaps extended, gear down — and you guessed it: go-around power again, and climb back out. At an altitude of just 1,000 feet, you still couldn't see the ground, let alone the runway. We had now been in the air for about 25 minutes longer than the flight plan, and because jets at low altitude burn fuel a lot faster than at a cruising level, it was time to find another airport.

We climbed out and away from PDK for the second time, and looped around to the western side of Atlanta to attempt landing at Fulton County airport (FTY). The weather to the west was only marginally better than over PDK, but with the plane configured for landing again we finally broke through the clouds at about 1,100 feet off the ground and successfully touched down.

While the flight took longer than we were hoping and we didn't exactly end up at the airport we had planned Gonzales, was hopeful that the National Aeronautic Association — the group that certifies flight records — would certify the flight as the established record time for the very light jet category for the Denver-Atlanta city pair. Regardless of that outcome, it was an exhilarating flight in a small but powerful airplane.

If you're ready to take ownership of your own HondaJet Elite, the base price is "only" $5.25 million. If you're a pilot, the HondaJet Elite is actually certified to fly with a single pilot onboard, so no need to find yourself a first officer. If you're not one of the few people who would fork over that kind of cash, you could buy a fractional ownership. Jet It fractional owners pay $1,600 an hour, the lowest in the industry — that's of course after purchasing your fraction of the aircraft itself. The jet is aimed at a market segment of flyers who tend to fly 90-120 minutes — although the aircraft can certainly make longer trips — and travel as an individual or as a part of a very small group. Jet It is scheduled to take delivery of its second HondaJet Elite in June.

Disclosure: Contributor J. Scott Clark was invited and flew free of charge on Jet It's Denver to Atlanta test flight.