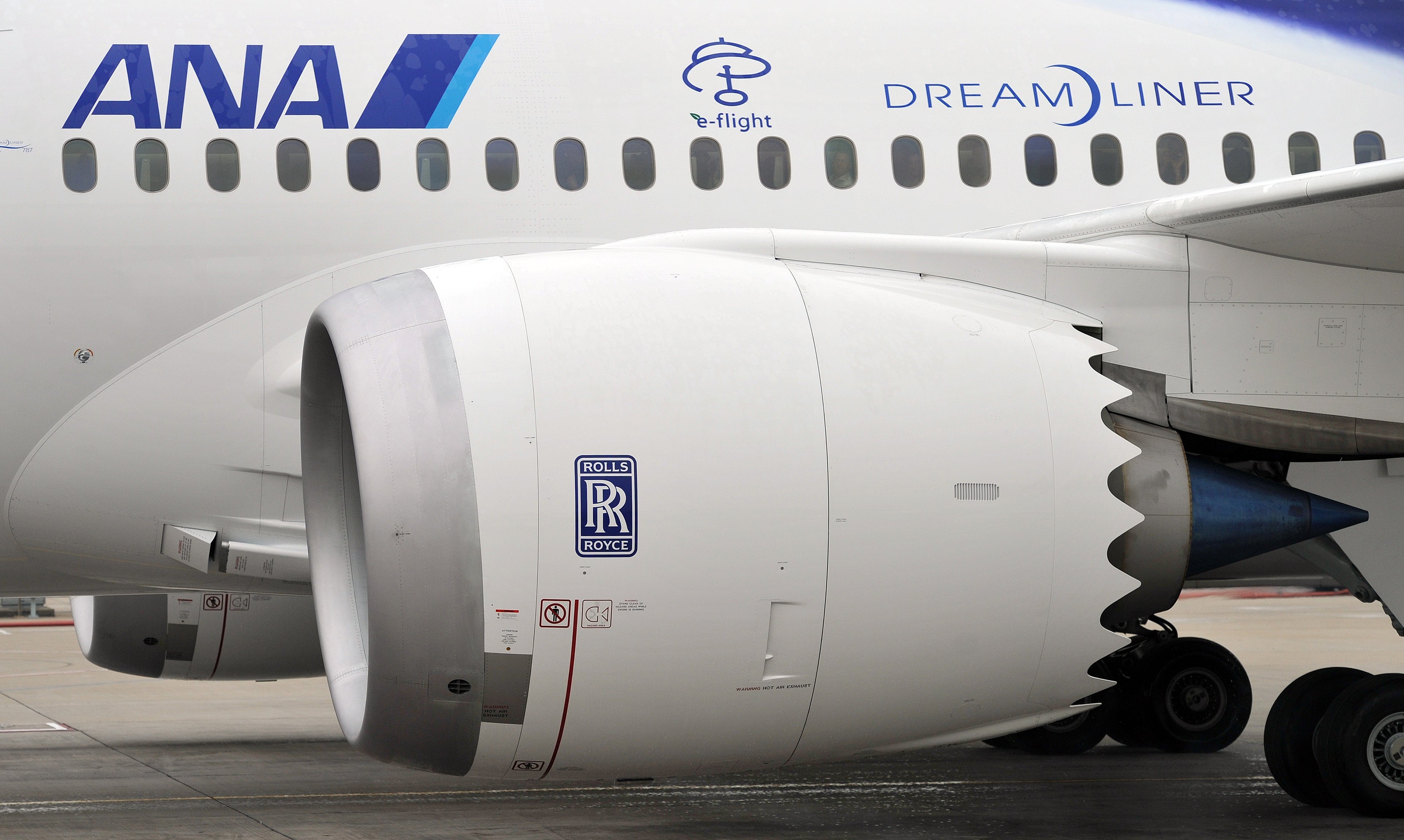 How Airlines Are Affected by the Rolls-Royce Engine Trouble on the Boeing 787
This post contains references to products from one or more of our advertisers. We may receive compensation when you click on links to those products. Terms apply to the offers listed on this page. For an explanation of our Advertising Policy, visit this page.

One in four Boeing 787s flying all over the world today has a problem — one that might mean your flight gets canceled, or you fly on another, less comfortable airplane. That's because some of the Rolls Royce engines installed on the Dreamliners are experiencing mechanical problems, and airlines are coping with increased requests for maintenance, or sometimes even need to ground at least some of their 787s.

The problem comes from the Rolls Royce Trent 1000 engines that equip about a quarter of the global Boeing 787 fleet. In the summer of 2016, it was discovered that fan blades were showing early signs of corrosion, an issue that forced Dreamliner operators to ground planes and cancel flights. Rolls Royce had to set aside hundreds of millions of pounds to cover engine replacement costs.

Things just got worse. New inspections have now uncovered additional problems with Trent 1000 Package C engines, this time with compressors. (That's the part of the engine where some of the air sucked in by the fan blades gets compressed and mixed with fuel.)

As a consequence, aviation regulators have added more stringent requirements for operators of the affected aircraft.

The US Federal Aviation Administration has limited Dreamliners equipped with those engines to 140 minutes from the nearest airport instead of the 330 minutes they were originally certified for. That's a big deal for airlines. So-called ETOPS (Extended Twin-Engine Operations) flights are important because they allow airplanes with only two engines to overfly vast stretches of water — something that has been the norm since the 1980s, when more fuel-efficient twinjets began replacing planes with three and four engines. Some airlines may even need to find alternative routings for some flights.

EASA, the European Aviation Safety Agency, has tightened the engine inspection regime from the usual 2,000 cycles (one takeoff and one landing equals a cycle) to 300. That means planes spend more time on the ground costing money, and less time in the air making money.

The sheer number of aircraft that needs to be inspected or repaired — there are 380 engines of this type in service around the world — means that there is no overnight fix.

But what are affected airlines doing, and what can you as a passenger expect?

15 out of the 27 Dreamliners operated by Norwegian’s various subsidiaries are affected by the issue. The airline confirmed that inspections have started in line with the airworthiness directive of EASA.

"We are disappointed with Rolls Royce and Boeing, because both we and ultimately our passengers expect brand new aircraft to operate as planned," a statement from the airline said. When it comes to operational disruption, at the time of this writing the route most affected is Paris Orly (ORY) to Newark (EWR). Norwegian has cancelled one of its seven weekly frequencies (the Wednesday departure) and has wet-leased aircraft in order to operate the remaining six.

BA says that it has only had to perform minor adjustments to its schedules so that the engines could undergo additional inspections, in compliance with the new regulations. It is one of the biggest operators of the 787, with 26 in its fleet.

It is rebooking affected customers onto alternative services or offering them a refund, according to the airline’s press office. "Like other airlines around the world, we are carrying out detailed precautionary inspections on Rolls-Royce Trent 1000 engines on some of our Boeing 787-9s to ensure we meet all the relevant regulatory requirements," BA said.

All Nippon Airways, the first and largest Dreamliner operator in the world with 64 in its fleet, was the first airline to experience issues with Trent 1000 engines, back in 2016, and decided then to replace them.

As a result of additional inspections mandated by the Japanese aviation authorities, some flights will experience aircraft changes in the period between April 20 and May 6, the most affected routes being Tokyo - Sydney and Tokyo - Manila. An ANA spokesperson said that no cancellations or severe schedule disruptions are expected.

The Thai flag carrier had to ground part of its 8-strong Dreamliner fleet for several weeks in the summer of 2017, in order to fix the Trent 1000 issues. At the time of this writing, no additional information about potential disruption was available.

Air New Zealand has said that nine out of its 11 Dreamliners have been affected (the two that aren’t use the newer Trent 1000 TEN engines). By mid-April, two aircraft had already been sent to the service center Rolls Royce has in Singapore.

The airline has also had to reschedule or cancel a number of international services. 6,500 passengers were affected until April 18, with another 9,000 expected in the days up to April 28. Among the routes affected are Auckland (AKL) to Los Angeles (LAX), Houston (IAH) and Tokyo Haneda (HND), as well as some flights to Australia and Pacific islands.

As reported by Flightglobal, weight restrictions mandated by FAA directives related to the Trent engine issue are also forcing Dreamliners on some Asia-bound routes to refuel at intermediate points, such as Sydney, Cairns, Darwin or Guam, because they can not carry a full load of fuel. Wet-leased aircraft from Portuguese operator Hi Fly are on their way to New Zealand in order to help fill the capacity gap.

The Singaporean long-haul budget airline has also been affected by the Trent 1000 problems. The airline anticipates that there may be some impact to the operation of its 16 Dreamliners, although it provided no specific details about what it might be.

In 2017, Virgin Atlantic was one of the airlines affected by blade corrosion issues in Trent 1000 engines. Partner airline Delta stepped in with its Boeing 767s to help cover Virgin's flagship London Heathrow (LHR) to JFK route. Virgin has 16 Dreamliners.

This time, Virgin Atlantic is leasing four Airbus A330-200s that, rather conveniently, became available after Air Berlin’s recent demise. These aircraft will help fill the gap while Trent engines are replaced and they will allow the airline to maintain its planned schedule. Since these Airbuses lack a Premium Economy section, passengers already booked in that class are being offered alternatives.

Like other airlines affected by the Trent 1000 issues, the Latin American carrier has resorted to leasing aircraft in order to maintain its schedules. Its 24 Dreamliners are all serving with the Chilean arm of the company, and according to fleet-tracking site Planespotters three are currently stored, which could mean they are down for repairs. It may not be a coincidence then that LATAM has three Airbus A330-200s on short-term lease from Spanish carrier Wamos.

They will soon be joined by a Boeing 747-400 from the same airline. Replacement aircraft for the grounded 787s are currently deployed on the following routes: Santiago (SCL) - Bogotá (BOG), Bogotá - New York JFK and Madrid (MAD) - Guayaquil (GYE).

Photos have surfaced online of LATAM's Chilean Dreamliners in storage in the California desert, waiting for engine fixes.

The Colombian airline has had to ground some of its 12 Dreamliners to perform inspections, but perhaps the biggest disruption will come from the additional ETOPS restrictions imposed by the FAA, as they affect some of its long-distance flights to Europe over the Atlantic.

The Spanish airline, with 10 Dreamliners in its fleet, has also been affected by the Trent 1000 issues. In February 2018, it had to temporarily ground one of its 787s. Air Europa deploys them on routes from Madrid (MAD) to Miami (MIA), Santo Domingo (SDQ), Buenos Aires (EZE), Havana (HAV) and Lima (LIM). Last year it carried more than a million passengers on its 787 fleet.

Air Austral, operating out of the French Indian Ocean island of La Réunion, is sending its Boeing 787s to undergo inspections at the Rolls Royce service center in Singapore. This means that its two Dreamliners will be out of service for at least two months each, one aircraft at a time.

Air Austral has leased an A330 from Portuguese carrier Hi Fly, and deployed it on the route between La Réunion (RUN) and Bangkok (BKK).

The Addis Ababa-based airline is a big operator of the 787, with 21 in service. Only some of them have Rolls Royce engines; most are made by the other provider of 787 powerplants, General Electric. "The Rolls Royce engines have been limited to 140 minutes" from the nearest airport, a source at the airline who asked to remain anonymous told TPG, but that does not mean their flights have to be re-routed, because "they fly within the African continent, to Europe and the Far East, so they aren't limited because alternate airports aren't that distant."

LOT, Royal Brunei Airlines and Oman Air all operate Boeing 787 versions with Trent 1000 engines. However no disruption to their flights has been reported. It is important to note that package B engines, that equip some Boeing 787-8 aircraft, as well as the newer Trent 1000 EN version, are not affected by the ongoing issues.

None of these three airlines replied to our request to confirm which engine package they use on their Dreamliners and whether they had experienced any issue, while a spokesperson for Rolls Royce declined to confirm the total number of airlines affected.