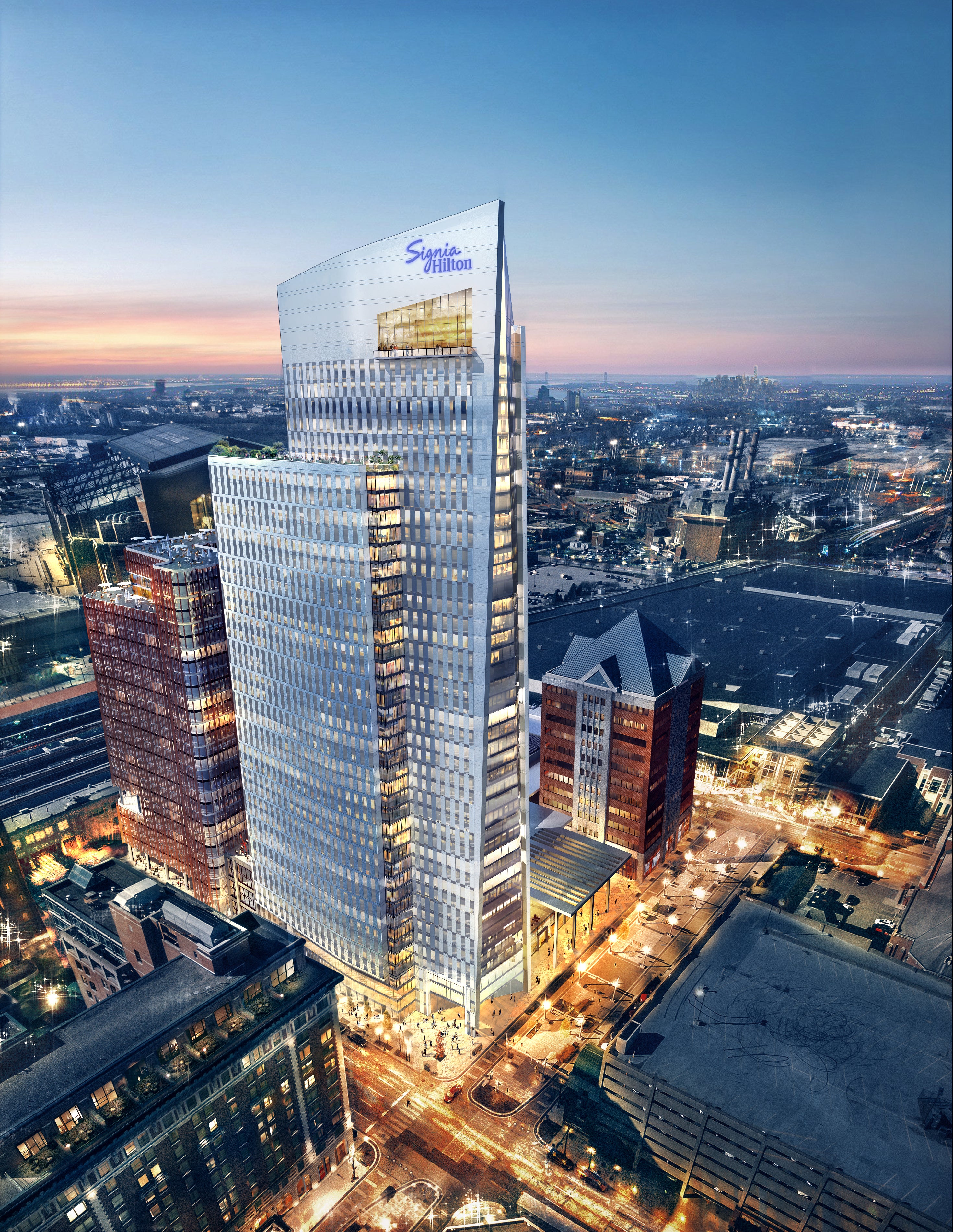 Signia Hilton: The New Brand That Wants to Make Hotel Meetings Trendy
This post contains references to products from one or more of our advertisers. We may receive compensation when you click on links to those products. Terms apply to the offers listed on this page. For an explanation of our Advertising Policy, visit this page.

You’ve arrived for your annual work conference and pull up to your hotel only to be disappointed by a dated, cookie-cutter property that only wants to gnaw at what little soul you have left.

You sit through seemingly endless workshops and speakers, all conducted in drab, run-of-the-mill meeting rooms with uncomfortable chairs and minimal flair.

At the end of the conference, you want to enjoy what little time you have on your trip, but with a mediocre hotel restaurant and no other on-sight activities, you're forced to venture out into the city.

If this sounds familiar, you're not alone. However, Hilton wants to change these experiences that are oh so common with business travelers. So on Friday it introduced its new brand that aims to accomplish that very goal: Signia Hilton.

From our talks with David Marr, Senior Vice President and Global Head, Full Service Brands at Hilton, it feels like the hotel chain wants to make business hotels sexy. They had three areas of focus when building what they wanted in the brand: modern design, technology and culinary experience.

At its core, Signia Hilton will be a collection of business hotels whose main focus is to offer meeting and event space to organizations and conferences. Each property will have a minimum of 500 guest rooms and 75 square feet per guest room of meetings and event space (so for a property of 500 rooms, we'll see at least 37,500 square feet of event space in which to congregate).

Properties will have all types of spaces, from large ballrooms to small and mid-sized meeting rooms. The brand also plans on including the latest technology into properties to help facilitate creativity, and while we don't have specifics yet, Marr says it will not be "flash in the pan" technology but evolving tools that truly help those staying at the hotel. He mentioned that meeting rooms could have features similar to Hilton's Connected Room, including more automated control over the lights or temperature of a space.

Renderings show common spaces that look a little more like a WeWork than a standard convention hotel. Expect modern decor and the addition of local flair — think more natural light and flexible spaces.

In terms of how this relates to other Hilton brands, Marr told us that it sits right above the Hilton flagship brand and below the luxury Conrad brand. Signia will have a bigger room and bigger bathroom than a Hilton but will stop short of the level of luxury that Conrad and Waldorf Astoria locations offer.

"This is an expensive hotel brand to build and don’t expect to see hundreds of Signia hotels," said Marr at the unveiling event on the 68th floor of 3 World Trade Center in lower Manhattan.

Improving the culinary experience was another focus area for the Signia Hilton brand. Marr made the point that many attendees remember a meeting by the quality of the food that was provided (or lack thereof). There will be memorable restaurants with quality food; not some chain Irish pub but a more distinct culinary experience that incorporates local flavors and attitude. Marr said those they surveyed when creating the brand indicated they wanted to entertain convention guests or business partners at the hotel instead of having to go offsite.

Properties will include a rooftop "destination" bar, hopefully attracting both hotel guests and locals to give it a more authentic vibe.

There's also a strong wellness aspect, as properties are said to include infinity pools and "state of the art spas, fitness classes and facilities." This hints at the idea that these hotels won't solely be for business travelers; those on vacation could enjoy their time at a Signia too.

The first Signia Hilton properties will be in Orlando, Indianapolis and Atlanta — with the Orlando property being a conversion and the latter two being completely new builds. The Hilton Orlando Bonnet Creek will be converted and upgraded to a Signia Hilton, and it's expected to be the first property to carry the Signia brand within the next couple of years.

Exterior renderings bring to mind other similarly positioned properties in other hotel chain's portfolios, like a JW Marriott or Hyatt Regency.

Hilton will then complete two new builds. One will be in Atlanta, with a Signia Hilton being built right next to Mercedez-Benz stadium and Geogia World Conference Center. The property will have 900 - 950 rooms.

The second new build will be the Signia Hilton Indianapolis property, featuring 850 rooms. It will not only be adjacent to the city's convention center; it'll offer direct access via a covered walkway. Marr said it will be a destination in the city and will feature an indoor and outdoor rooftop bar with 360 degree views of the city.

Signia will be a global brand, so expect to see it expand outside the US in future years, spanning both urban markets and resort destinations popular for conventions. While the first property in Orlando will be a conversion, Marr said that most Signia Hilton's will be new builds. It doesn't make as much sense to convert a convention hotel that's 20 years old, he added. Hilton is currently looking at three foreign cities as future Signia locations, but no other specifics were revealed.

Like other Hilton brands, the hotel will be part of the Hilton Honors program, so you'll be able to earn and redeem points at the properties in addition to having access to elite benefits like free breakfast and room upgrades. While there won't be any differences in recognizing elites at a Signia Hilton, Marr did say there would be incentives and rewards for meeting planners, so think bonus points for reserving space to hold your company's next offsite gathering.

Since this will be on the more luxurious side of Hilton properties, expect free nights to fall closer to the top of the Hilton Honors award prices, which are typically capped at 95,000 points (with one notable exception).

This will be Hilton's 17th brand, begging the question — does the chain really need another brand?

"We’ve been talking about this for five to seven years but we were waiting for the right timing," said Hilton CEO Chris Nassetta at the event unveiling Friday in New York. "It’s the right time because our customers tell us they want it."

Nasseta said the name is a combination of "insignia," representing power and status, and the word "signature" to signal the best that Hilton has to offer: a unique, special hotel.

Signia Hilton's logo feels like it blends in with many of the other Hilton's brands, but it remains to be seen if the brand can take business hotels to the next level.

Related stories
The ultimate guide to earning elite status with United cards
American Airlines forgot it had landing slots at JFK. Then it lost some of them
After 19 months, United Airlines is officially suspending flights at New York's JFK airport — again
17 ways to earn lots of Marriott Bonvoy points