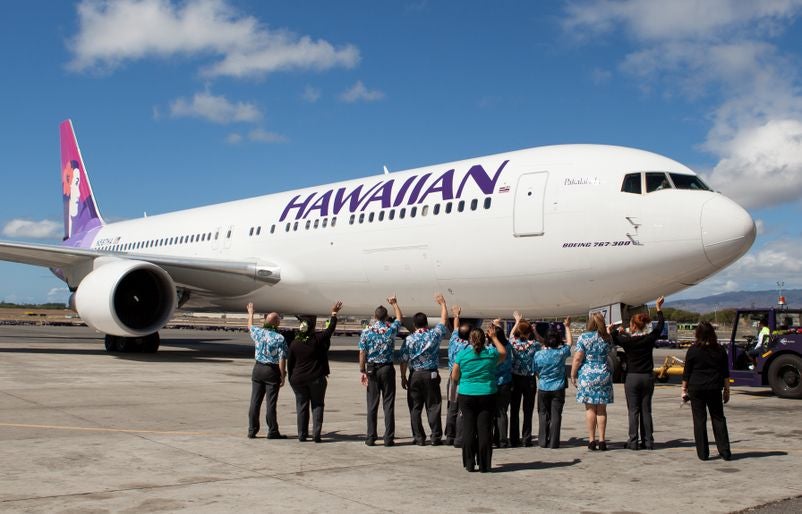 Aloha, Friend: Hawaiian Completes Last-Ever Boeing 767 Flight
This post contains references to products from one or more of our advertisers. We may receive compensation when you click on links to those products. Terms apply to the offers listed on this page. For an explanation of our Advertising Policy, visit this page.

And like that, Hawaiian Airlines has retired one of the most iconic aircraft in its fleet.

The last Boeing 767 flight operated by Hawaiian was completed on Monday, when the aircraft left Sacramento (SMF) at 9:30am PST bound for Honolulu (HNL) where it landed at 1:24pm HST.

After landing at Daniel K. Inouye International Airport, the aircraft, registered N594HA, and its passengers were greeted by Hawaiian Airlines CEO Peter Ingram and other airline staff. This 767-300ER, which is nearing the end of its lifespan, was delivered to Delta in 1986 and sold to Hawaiian in 2006, making the bird 32 years old.

This marks the completion of the modernization of the airline's long-haul fleet from older Boeing aircraft to modern Airbus jets, including the widebody A330-200 and the new A321neos. Hawaiian does still operate 20 Boeing 717s for inter-island service and has 10 Boeing 787 Dreamliners on order, with an option to purchase another 10.

Hawaiian accelerated the retirement of its 767s, which it put its final six to rest over the last couple of months, as it took delivery of the new A321neos — a an aircraft has serious range for a narrowbody. Boeing is expected to deliver the first 787 to the airline in 2021.

“The Boeing 767 was instrumental to our transpacific growth, international expansion and success in introducing millions of guests to this special place we call home,” said Peter Ingram, president and CEO of Hawaiian Airlines, in a statement.

The 767 replaced Hawaiian's fleet of DC-10 aircraft and was made famous as one of the first twin-engine jets to be used on longer journeys that spanned oceans. The airline first took delivery of the aircraft in 2001 and flew it between Honolulu and San Diego. 2007 saw the peak of Hawaiian's 767 fleet when it operated 18 of the aircraft — it was the primary workhouse behind the airline's expansions to long-haul destinations in Australia, Japan and South Korea.

From a passenger experience side, the 767s departure is mostly a good thing, it's the end of recliners in business class — you'll only have lie-flat seats on the A330 configured in a 2-2-2 layout. Although coach's 2-3-2 layout will be missed and is replaced by 2-4-2 on the wide-body A330 and 3-3 on the single-aisle A321neo.

However, many an AvGeek is weeping as one more airline says bye to an aircraft that's been the backbone of so many carriers around the world.

Three of four of Hawaiian's last 767s have been sold off to United while others that have recently left the fleet have been purchased by Air Canada Rouge and Azur Air Russia are sitting in storage or are bound for desert graveyards.