Flight Meets Grill: How to Travel by Air With Barbecue Equipment and Ingredients

Articles
Michael Y. Park is a senior contributing editor who’s written for The New York Times, Reuters, Bon Appetit and others. For TPG, he’s written about Air Force One, immigration and security, airline food and more.
Follow
May 25, 2018
•
6 min read 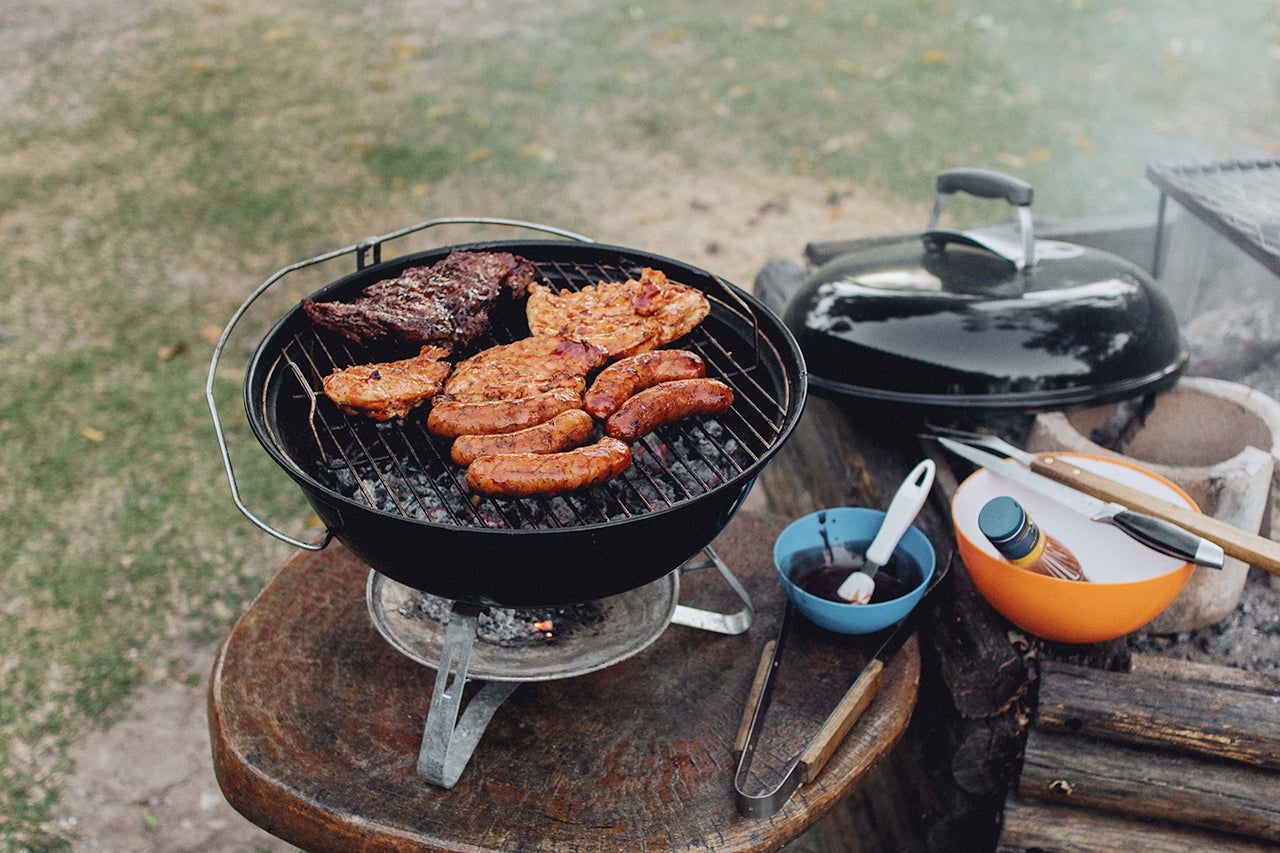 Flight Meets Grill: How to Travel by Air With Barbecue Equipment and Ingredients
This post contains references to products from one or more of our advertisers. We may receive compensation when you click on links to those products. Terms apply to the offers listed on this page. For an explanation of our Advertising Policy, visit this page.

You may be rarin' to get grilling as soon as you step off the plane for your Memorial Day weekend trip, but as a dedicated grillmaster and air traveler, you need to know a few things about how to get your equipment and ingredients to your destination safely. Fortunately, barbecue expert, pitmaster, author, frequent traveler and star of PBS's "Barbecue America" Rick Browne rustled up a few juicy morsels on how to do exactly that.

First of all, yes, there is equipment that true barbecue artists will insist on taking with them that can't be easily replaced when they land. Like professional chefs, it's the rare elite grillmaster who'd be willing to part with his own knives.

"I don't want to go to an event or demonstration and want to have to borrow a knife," Browne said in a telephone interview from his home near Vancouver, Washington. "It gets sloppy results, and you look like an amateur if you don't get quality results."

The set Browne likes to use currently runs up to 12 inches and $1,800, so he also tries to ensure they arrive in one piece. They can't go in a carry-on, obviously, so he places them in plastic sleeves in a specialized knife case that he buries between layers of clothing in his hardshell suitcase for checking. The most important step, however, is that he leaves notes for the Transportation Security Administration officers explaining exactly what the knives are and what they're used for.

"I put a note on it, outside and inside, saying what's in there and what it's for — I don't like to surprise people," he said. "I've never had a problem with that."

The other equipment Browne uses is less vital — even the grill itself, which he just borrows or buys when he arrives — but when he must take scissors, spatulas, tongs or what have you, he tries to be just as cautious.

"I've had people question tongs," he said. "I've had to explain, 'They're not sharp. You use them to pick up food.' One TSA guy said, 'I'll let you go this time, but it could be used as a weapon.'"

It's a similar idea when he travels with dry ingredients like rubs and spices. ("I always make my own barbecue sauce from scratch," he explained.) He either checks them or carries them on, depending, and each ingredient goes into a separate plastic bag and is clearly labeled. He just knows not to take it too hard if he has to ditch one or two of the ingredients at security.

"If you have a carry-on and you've got cornstarch in a plastic bag, you're going to get looks," he said. "I've had people say 'You can't bring this on, and I'm not going to taste it.' So I threw it away. It's cheap and I can buy more when I get there."

Wet ingredients are a different matter. Grill and barbecue aficionados are legendarily fanatical about their secret sauces and treasured mops, but Browne learned the hard way that you should avoid flying with liquids whenever possible.

"I was traveling to Memphis in May and I had a new passionfruit barbecue sauce I really liked in this big plastic bottle that I put in my suitcase and sealed in a plastic bag," he said. "Well, by the time I got to Memphis, I had a bunch of clothes that all were stained and smelled like passionfruit barbecue sauce. The people who checked my bag out didn't close the seals as well as I had."

Now, when he does travel with liquid ingredients, they're all checked, of course, but they also get his note treatment, explaining what the liquid is and what it's used for and — critically — pleading with anyone inspecting the bag to seal the containers as tightly as they found them.

And instead of sticking them in his suitcase with his clothes for the week, Browne puts wet ingredients in plastic bottles or containers that are double- or triple bagged then placed inside a heavy-duty cooler filled with ice packs — he likes Kong Coolers or store-brand coolers from Cabela's. To make sure the lid doesn't fly open in transit, he secures it with zip ties or puts a regular, heavy-duty lock on the lid — and leaves it open.

"In those airports where you can see them scanning the checked luggage, I'll actually tell the TSA guy running it through his scanner that it's unlocked and ask him if he can just click the lock closed when he's done," Browne said.

Meat gets the same treatment as any wet ingredient except that he makes sure it's frozen solid before he packs it, in case there are unforeseen delays during the flight. He doesn't travel with vegetables or fruit, which he can easily replace or work around at the destination, or with easily spoiled fish — with the exception of salmon, which he brings, again, frozen solid.

If you've got a layover and perishables with you, you're going to have be prepared. With today's jumbo-sized terminals, making a connecting flight seemingly a million gates away could mean the difference between a blue ribbon and a participation medal at the 'cue competition. Saving your quickly-wilting herbs from the trash bin comes down to studying the airport layout when you book your flight.

"Atlanta's a nightmare, and Dallas is almost getting as bad, and San Francisco's getting like that too," he said. "You have to leave a couple hours between flights and just know what you're getting into beforehand."

And when he's trying to bring home the finished product, like a juicy rack of Kansas City ribs, burnt ends from Lockhart or Carolina pulled pork slathered in slaw?

"I carry the vacuum container God gave me — it's called my stomach," he said. "It's the only safe way."

Related stories
When does airline elite status expire?
Act fast: Get a $15 Lyft credit with your Walmart+ subscription
Increased offers available on Barclays cobranded business cards
This top cruise line is now throwing in free tours worth thousands of dollars if you book
Featured image by (Photo by Maria Fernanda Gonzalez via Unsplash)