First Look Inside Istanbul New Airport, Soon to Be the World's Largest

Articles
Emily McNutt is The Points Guy's Global News Editor and is based in London.
Follow
Oct. 26, 2018
•
10 min read 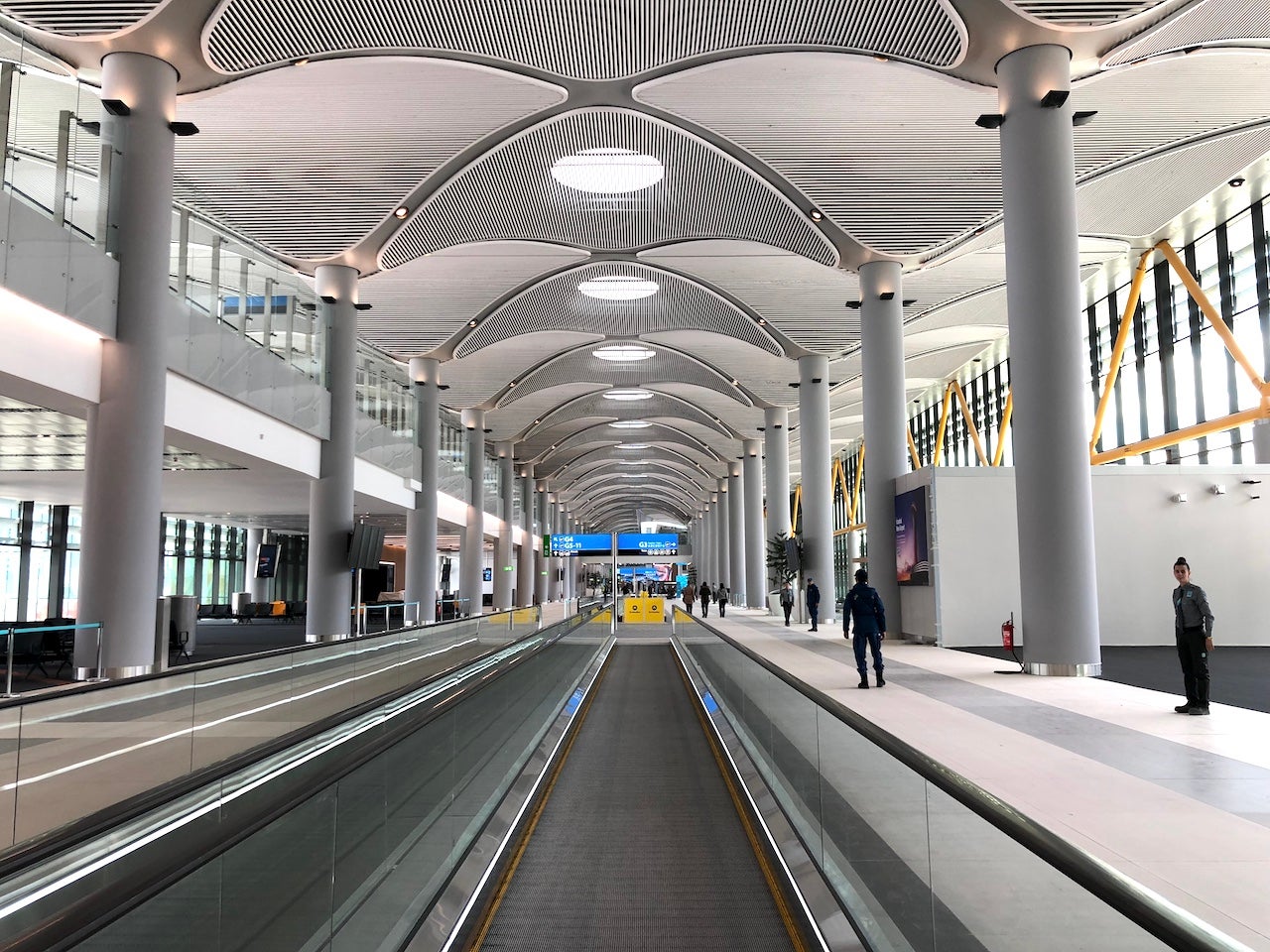 First Look Inside Istanbul New Airport, Soon to Be the World's Largest
This post contains references to products from one or more of our advertisers. We may receive compensation when you click on links to those products. Terms apply to the offers listed on this page. For an explanation of our Advertising Policy, visit this page.

Istanbul is gearing up to open its new airport, which intends to become, one day, the largest in the world. For now, though, it doesn't have a real name: It's called simply Istanbul New Airport, and it's also using a temporary three-letter code, ISL. Yet the airport, which is still under construction, is set to open for a soft launch on Monday, Oct. 29 — not, however, the grand opening that had been originally planned, with the closing of the current IST airport at the same time.

At a press event in Istanbul on Thursday, Turkish Airlines and IGA, the company building and operating Istanbul New Airport, showed off a slice of the gleaming structure. While a majority — in fact, nearly all — of the airport was off limits to press, a brief walkthrough of one of the main hallways in the domestic part of the airport revealed how massive and grand the structure is.

Unlike many aviation infrastructure projects like Berlin's Brandenburg Airport, which was supposed to open in 2012 but still isn't anywhere near ready, Istanbul New Airport went through its design and construction phases at an otherworldly speed. In June 2014, IGA broke ground, and in January 2018, the first installation of the airport's skeleton was complete. From that point, it was full speed ahead in order to stick to the original opening date of Oct. 29, 2018. (The date carries a large significance in Turkey; it's the anniversary of the foundation of the Turkish Republic, and the country's national holiday.)

After just 42 months of construction, Istanbul New Airport was supposed to be ready to start full operations on that day, but the issues that invariably plague large construction projects turned out to be serious enough that Oct. 29 will be just a soft open, with a handful of flights by flag carrier Turkish Airlines. The bulk of flights into the city will continue to land at IST for some months.

At launch, the airport will be able to transport 90 million passengers annually, and IGA forecasts that within 10 years' time it will be able to handle 200 million — the largest in the world by number of passengers. (Atlanta's Hartsfield-Jackson International Airport, the current and long-time world champion, did about 104 million last year.) By 2020, IGA CEO Kadri Samsunlu expects Istanbul New Airport to reach the "100s Club," the title given to airports that are capable of transporting 100 million passengers per year. Only Atlanta handles triple-digit passengers today, but Beijing and Dubai are close and growing fast.

Overall, the goal for Istanbul New Airport is to turn it into a major international hub — think like Dubai (DXB) or Doha (DOH). According to Samsunlu, Istanbul is located perfectly — it's within three hours of three continents, 60 capital cities and more than 120 countries. With advancements in connectivity on the ground for passengers, such as in-app directions that offer Google Maps-like functionality, Samsunlu thinks that Istanbul New Airport will be easier to get around for passengers than current designs.

From soft launch until full completion, the airport is expected to open in four phases. Phase 1a, which is slated to open on Monday, will feature 1.4 million square meters of terminal space, along with support facilities and a total of two runways. Phase 1b will follow shortly thereafter, just after hard launch in December, with the opening of a third runway. Between 2021 and 2022, phases 2 and 3 will be completed, featuring two additional air traffic control towers and two additional runways, including the only runway that will offer a West-East pattern. By 2028, the airport is expected to be fully completed with phase 4, featuring the sixth and final runway, as well as the opening of a satellite terminal.

Istanbul New Airport will offer a total of 114 gates, almost triple the 41 offered at Ataturk, Istanbul's current main airport. (There's also a smaller one, Sabiha Gökcen or SAW, located on the Asian side of the city, while both IST and ISL are on the European side.) As many as 15 A380s, the biggest passenger planes in the world, can be parked at any one time. The airport will offer an additional 257 remote parking units, as well as up to 29 remote bus gates.

As Istanbul New Airport isn't quite ready to be completely open just yet, at the soft launch on Monday Turkish Airlines will operate five regional routes — three domestic, plus Baku in Azerbaijian and Northern Cyprus — for two months, until Dec. 30, when the airport will open and operate as Istanbul's main airport.

In the interim, Istanbul New Airport will operate under the IATA code ISL. Istanbul Ataturk, the city's aging current airport, will operate with the IST code until Dec. 30, when the migration is complete and it will officially close for good. A mass migration of planes, ground equipment, ticketing tech and more was supposed to happen overnight Monday, making the 45-minute trek from Ataturk, located west of Istanbul, to New Airport, located about 40 minutes north of the city. (By 2020, a metro connecting the city and Istanbul New Airport is expected to launch.). However, because of the delayed opening, the mass migration isn't going to happen overnight — at least, not for now. During the press conference, Smasunlu declined to comment on how the migration will take place in December.

One of the aspects of Istanbul New Airport that IGA is priding itself on most is the security system. Throughout the terminal, there are 9,000 CCTV cameras. That number compares to the 22,000 CCTV cameras that Samsunlu said are placed around metropolitan Istanbul, a city of more than 15 million. Facial recognition technology will locate people on banned-passenger lists. Cameras located on the exterior of the terminal will allow air traffic controllers to direct landing aircraft through the network of taxiways and to their appropriate gate.

The plan to make New Airport the biggest in the world clashes with one problem, though: The competition from the home bases of the Big Three Mideast carriers. Emirates in Dubai, Etihad in Abu Dhabi and Qatar Airways in Doha are relatively close geographically, and are sure to put up a fight to make sure Istanbul doesn't steal their lucrative connecting traffic. But IGA says the time is right for airlines to think of Istanbul as a hub — rather than its counterparts in the Middle East.

Samsunlu said that when the airport officially opens later this year, it will attract international airlines that may have left the city following an attack in 2016 that killed 31 people. According to Samsunlu, more low-cost carriers will arrive, given the increase in the number of slots available, which previously restricted their presence in Istanbul. The goal is to bring in as many airlines as possible, he said.

No US carriers fly to Istanbul; Delta ended its flights in 2016 following the attack. When asked if any US carriers had expressed interest in launching service to Istanbul New Airport, Samsunlu responded optimistically, "[We're] looking forward to Delta being back." He did, however, clarify that Delta had not yet expressed interest. Any others? "We are waiting for them," Samsunlu said.

The 10.5 billion euro (~$12 billion) project hasn't come without controversy. Workers have long complained about working and living conditions. They've complained of a lack of safety both at their workplace and their housing, as well as lack of hygiene, living quarters infested with bedbugs and inedible food. In late September, workers were even arrested for protesting unlawfully and damaging property. Hundreds were detained.

At a press conference on Thursday, Samsunlu said that IGA was committed to "fixing the problems they raised." When pushed further for an update on how many workers were killed during the 42-month construction period, he grew visibly frustrated.

"[I have] the deepest sympathy for any loss," he said, before turning blame toward the workers: "They need to watch out what they're doing." Samsunlu said that, to his knowledge, there have been 30 confirmed deaths of workers.

There is still, visibly, much work to be done. Parts outside of the one domestic hallway that journalists were allowed to tour are still visibly under construction.

Even during our short time in the domestic part of the terminal, workers could be seen putting final touches on portions of the structure before Monday's soft opening.

On Monday we'll find out the real name of Istanbul New Airport, as well. The first flight will take off with Turkish Airlines employees for Ankara (ESB), before the return flight heads back to ISL as the first revenue flight to New Airport. As for Ataturk, it'll be turned into a large park, closed completely to commercial aviation operations.

All photos by Emily McNutt / The Points Guy.