Articles
Ben Smithson is a senior writer for TPG UK. Originally from Australia, he is the primary points and miles writer for the U.K. site.
Follow
July 10, 2019
•
6 min read 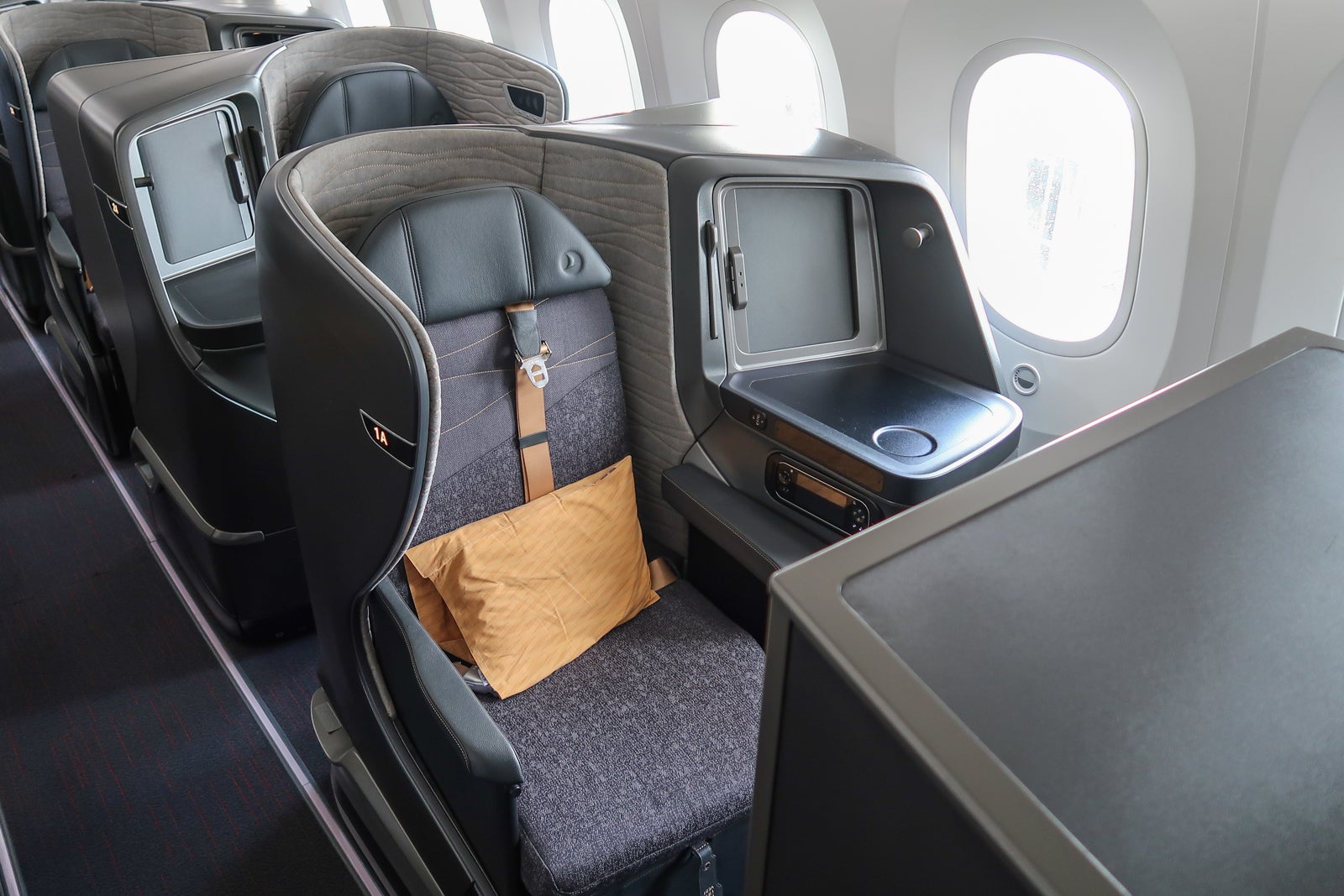 First Look Inside Turkish Airlines' Brand-New 787 Dreamliner
This post contains references to products from one or more of our advertisers. We may receive compensation when you click on links to those products. Terms apply to the offers listed on this page. For an explanation of our Advertising Policy, visit this page.

Turkish Airlines has begun commercial flights with the first of 25 Boeing 787-9 Dreamliners it ordered, featuring an all-new business class, this week. TPG was on board for one of the first flights.

The airline is currently using the aircraft on domestic familiarization flights between the enormous new Istanbul airport and the popular seaside town of Antalya up to three times daily.

The aircraft features just two cabins, business class and economy. There is no separate premium economy, contrary to the trend which sees major international carriers feature this intermediate class between lie-flat seats in biz and standard seats in economy.

Although Turkish Airlines is well known for its food, beverages and lounges, its business class seating has previously left something to be desired on long-haul routes. Seating in a 2-3-2 or 2-2-2 layout is the norm on their current Boeing 777 and Airbus A330 aircraft; those seats go fully flat with plenty of legroom, but do not have the direct aisle access and privacy of many competitors.

The 787 introduces a completely new product, with 30 Stelia Aerospace “Opal” model seats installed in a staggered 1-2-1 layout across seven rows. These are the same seats as Singapore Airlines has introduced on Dreamliner aircraft, which it uses on regional mid-haul routes, rather than the long-haul routes Turkish plans on using its 787s for.

The Turkish 787 business class cabin takes on a luxuriously moody black and grey color palette, with the seats speckled with gold stitching. My favorite part of the seat design is the well-padded, cocooning head shroud which feels comforting and inviting, like a brand new couch you might carefully pick out for your home. The business cabin does feel quite packed.

While these seats themselves are not that big, the casing around the seats bulges outwards considerably, providing plenty of privacy and blocking sight lines. I could not see another passengers face while seated, which I really liked.

The tray table slides out from under the seatback screen and is large and sturdy, though is too high. It wasn't very comfortable, either to eat or to type, and this was my biggest issue with the seat. I wouldn't pick this product for long flights where I planned to work between multiple meals inflight because of the height of the tray table.

The seatback screen is big and crisp, though it does not operate as a touch screen. You must use a separate remote control.

I found the over the shoulder seatbelt uncomfortable over my left shoulder as it constantly pulled fairly tightly towards the right.

I had read reports that some people find this seat tight for sleeping in. I tried out the fully-flat bed mode and was surprised at how much depth there was to the footwell; I am 6ft and could easily lie completely flat on my back with my toes facing up without them touching the end of the footwell. I could even bend them slightly downwards and don't think I'd have any trouble sleeping in this seat.

The seat is definitely narrow around the shoulders in bed mode. If you are broad you may find it restrictive especially if you toss and turn as you sleep, but I felt more cocooned than claustrophobic.

Having recently flown Turkish Airlines A330 business class, if I was flying alone I definitely would prefer the new 787 seat — but if travelling with someone else the enormous space and coupled seats provided by the previous generation business-class would probably be preferable.

There's an industry-standard 3-3-3 layout in the back of the plane, made up of two large cabins.

These come with an also-standard 31" pitch and fabric-covered seats in a grey and red color scheme, with red pillows and adjustable leather headrests.

There's USB charging under the large and clear touchscreens with a single fold-out tray table.

Following these Antalya familiarization flights, the aircraft is then scheduled to be used on longer flight from Istanbul (IST) to Denpasar-Bali (DPS) later this month, followed by Washington Dulles (IAD) starting Aug. 8 and Atlanta (ATL) beginning Sept. 15.