A first for Fiji Airways: Inside the newest A350 that will fly to the US 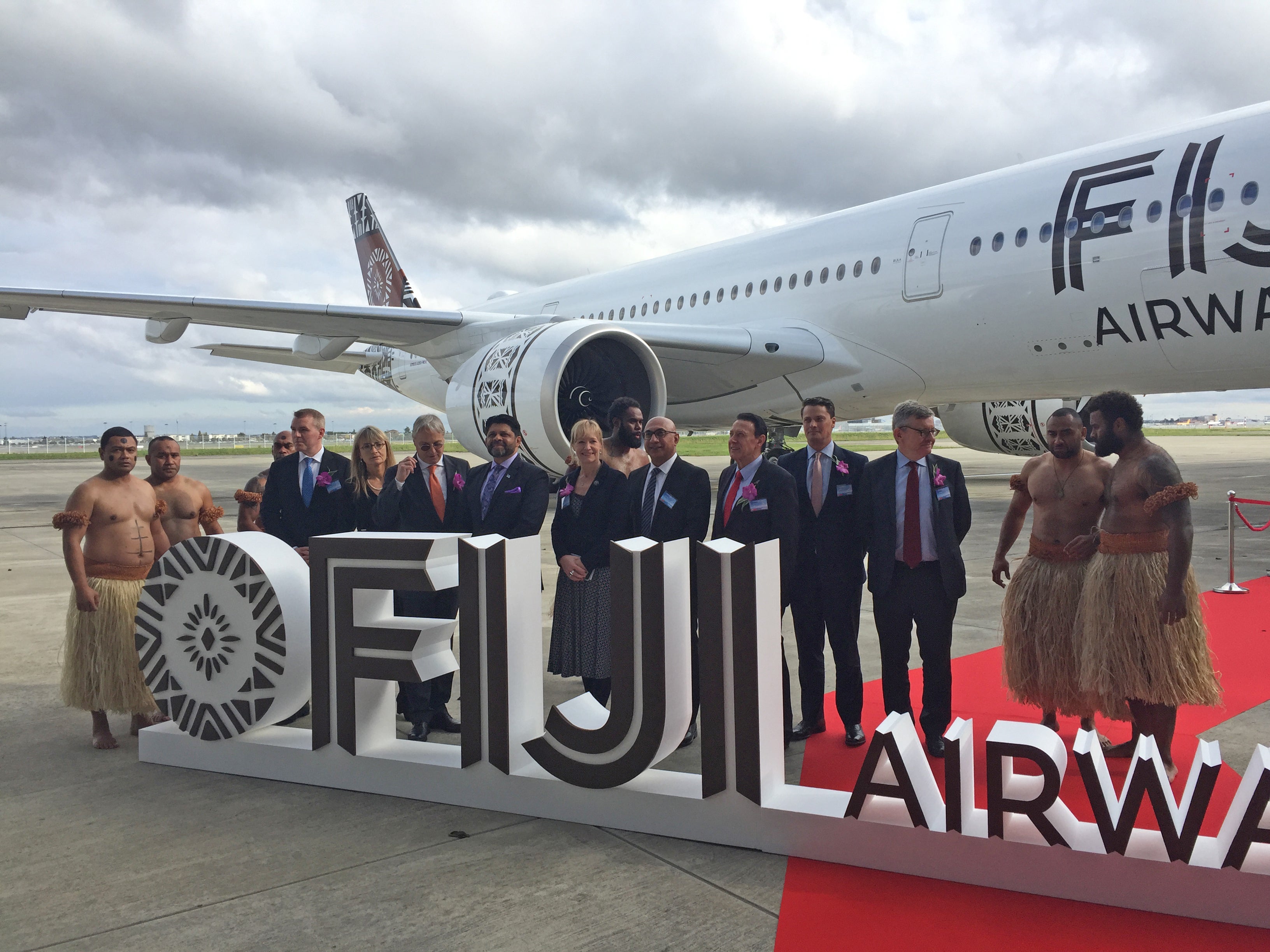 A first for Fiji Airways: Inside the newest A350 that will fly to the US
This post contains references to products from one or more of our advertisers. We may receive compensation when you click on links to those products. Terms apply to the offers listed on this page. For an explanation of our Advertising Policy, visit this page.

Airbus delivered on Friday the first A350 to the airplane's newest customer, Fiji Airways. It will soon begin serving Los Angeles from the Pacific island nation, becoming the latest A350 serving the United States. Fiji Airways will join the ranks of airlines sending the latest Airbus long-haul jet to the U.S., including Qatar Airways, Cathay Pacific and Virgin Atlantic, among others.

On Friday, TPG also got to look inside the aircraft, as Fiji Airways took delivery of the first A350 from the Airbus plant in Toulouse, France.

Fiji Airways' intricate livery, inspired by the ancestral traditions of the Fiji islands, is perhaps its most recognizable, eye-catching feature, but the arrival of this state-of-the-art aircraft has provided an opportunity for the airline to redefine its product and up its game when it comes to passenger experience in the South Pacific market.

With its new A350, the first of the type Airbus has ever delivered to the South Pacific region, Fiji Airways also wants to open up new destinations in North America, the market that is expected to drive the airline’s growth in years to come.

Fiji Airways has outfitted its A350 — leased from Dubai-based DAE Capital — with 334 seats in a two-class configuration, 33 of which are in business class. The 1-2-1 layout gives all seats in biz direct aisle access.

The business-class cabin is fitted with 33 full-flat Super Diamond seats made by Collins Aerospace. A combination of gray, black and white pattern evocative of traditional Fijian art is the dominant color note here, making for a rather fresh and elegant atmosphere at the front of the aircraft.

The economy class cabin includes 39 Bula Space seats (named after the traditional Fijian salutation, “Bula!”) which, although not a fully fledged premium economy product, provide extra legroom and come with early boarding. Service in Bula Space is pretty much the same as in regular economy.

Both Bula Space and regular economy class feature the same Recaro CL3710 seats with the same prevailing tones of gray and green.

All seats feature seat-back screens with access to the Thales in-flight entertainment system, as well as internet connectivity.

As soon as it reaches Fiji, after a short stopover at the Dubai Air Show, this first A350 will begin crew familiarization flights to Australia and New Zealand (Sydney, Melbourne, Auckland and Brisbane.) Then, Fiji Airways will deploy the A350 on its flagship routes to from Nadi (NAN), the biggest Fijian airport, to Los Angeles (LAX) and Sydney (SYD).

Upon entry into service of its second A350, which is due for delivery by the end of this year, Fiji Airways is going to be able to introduce daily rotations to both LAX and SYD.

Fiji Airways CEO André Viljoen said at the delivery ceremony that the airline is eyeing additional North American destinations beyond Los Angeles, San Francisco and Honolulu. Viljoen mentioned Chicago and Dallas - Fort Worth as possible future destinations. Either would require procuring a third A350, which is unlikely in the next 18 months.

The U.S. features prominently in Fiji Airways' plans. The airline expects it to become its main source of growth in the future.

Fiji Airways is not a full member of an international alliance, though the carrier does participate in the Oneworld Connect platform, offering members of select Oneworld programs an opportunity to earn and redeem miles, take advantage of priority check-in and boarding, access lounges and more.

Strengthening the North American market will also allow Fiji Airways to diversify away from the Australian and New Zealand markets, which together now account for over 60% of its traffic, while North America accounts for 20%. The latter are markets where just modest growth is expected and where Fiji Airways faces strong competition from Qantas, Jetstar and Virgin Australia as well as Air New Zealand.

The A350 will complement the current fleet of six A330s that will continue to operate to long-haul destinations other than Los Angeles and Sydney.

Fiji Airways is also one of the airlines affected by the worldwide grounding of the 737 MAX. The airline has two of the MAX8 variant. The current uncertainty about when the aircraft will be cleared to reenter service has led the airline to extend the leases on some of its earlier-model Boeing 737NGs until March at least, Viljoen said. In case the situation is not resolved by then, Fiji Airways has made contingency plans to further extend the 737NG leases until December of 2020, and may even add to its fleet A321neos from Airbus.