Articles
David Slotnick is a senior aviation business reporter at TPG. He covers anything and everything to do with the business of running an airline.
Follow
July 21, 2022
•
10 min read 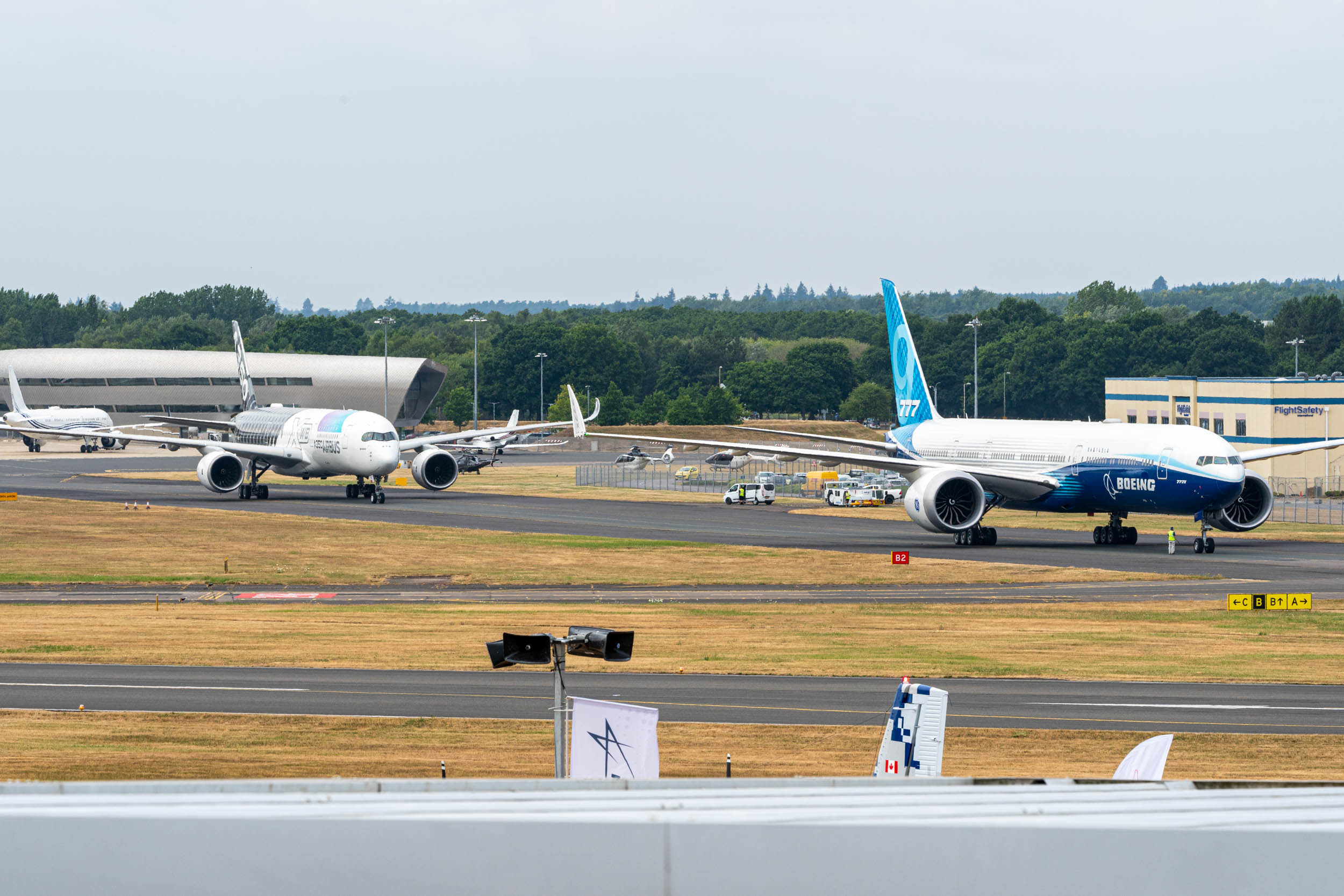 The Farnborough Airshow began to wind down on Thursday, marking a successful end — sort of — to the first major European airshow since before the pandemic.

While the show at the Farnborough Airport (FAB) about 30 miles southwest of London is primarily from Monday to Wednesday, many exhibitors and potential customers remain on site through the week, closing deals or going over details and showing off new products. On Friday, the airshow opens to the public for prime views of the flying display.

More deals are possible — several were announced Thursday morning — and some deals that weren't finalized during the show could come in the next few weeks. But for now, Farnborough is pretty much a wrap.

All in all it was a fairly tame show, as far as these things go. An uncertain supply chain, instability in global markets, a looming recession, and notable sales already inked in recent years made for a relatively quiet round of orders at this show. In some ways, it served as a chance for manufacturers to meet with suppliers and work towards stabilizing supply chains.

Even so, there were some big and notable sales.

The show opened on Monday with a blockbuster deal between Delta Air Lines and Boeing for an order of 100 of the new 737 MAX 10, with options for 30 more.

It was Delta's first order placed with Boeing since 2011, and would see planes start to be delivered in 2025.

The MAX 10 and the smaller MAX 7 are still in the process of being certified by the FAA, but a new law that goes into effect at the end of this year has complicated the process

The 2020 law requires all newly certified plane types to have a new type of cockpit alerting system, which the two MAX models do not have. Adding that system to the MAX 7 and -10 models would be costly for Boeing and would negate the variants’ commonality with previous 737 MAX and NG models, a major selling point for the plane. In essence, it would be considered a different plane type rather than a variant.

If the plane is not certified by year’s end, Boeing would need Congress to waive the requirement in order to be able to sell the variants without the new system, although the Delta order could add pressure on Congress to issue the waiver or grant an extension. The MAX 7 is further along in the certification process than the -10.

The Delta deal represents a double-win for Boeing: It marks a sale of an important model while opening relations with a customer with which it otherwise had an empty order book. And, with another U.S. airline awaiting the uncertified MAX models, it adds pressure to Congress to grant the extension and provide a degree of certainty to the U.S. companies.

But the Delta deal wasn't Boeing's only big sale of the show.

Boeing also announced a deal with Qatar Airways for 25 of the MAX 10 on Thursday, after the main portion of a show came to a close.

On Tuesday, Boeing announced an order from 777 Partners, a private equity firm that owns stakes in several airlines, for 30 of the high-capacity 737 MAX 8-200 variant with options for 36 more. Coupled with earlier orders, that brings 777 Partners’ order book potentially as high as 134 MAX aircraft, if the options are exercised. The investment firm has ownership stakes in Canadian ULCC Flair and new Australian carrier Bonza.

In terms of wide-bodies, the show was quieter, but Boeing still inked a deal with aircraft lessor AerCap for five additional 787-9 Dreamliners, and signed a memorandum of understanding with Azerbaijan Airlines for four new 787-8s.

It was a quieter show for Airbus, though the company managed a few notable sales.

Delta firmed up options for 12 additional A220-300s, bringing its total order of the larger A220 variant to 62 aircraft.

EasyJet, meanwhile, ordered 56 A320neo family aircraft, which included the upsizing of 18 previous A320neo orders to the larger A321neo. On Thursday, LATAM ordered 17 A321neos, bringing its order book up to 100 A320neo-family aircraft, and said that it plans to include the longer-range A321XLR in its order book.

Brazilian regional jet-maker Embraer secured two orders on Tuesday: One with Canadian airline Porter for 20 additional E195-E2 jets, converting options from a 2021 order, and one with Alaska Airlines regional carrier Horizon Air for eight E175s with options for 13 more.

On Wednesday, Embraer signed an memorandum of understanding with Nordic Aviation Capital (NAC) for two E190F converted freighters, which will go to Astral Aviation in Nairobi, Kenya.

The airshow did not see any new commercial aircraft announced, but there was still one notable reveal: Boom Supersonic unveiled the new design for its upcoming Overture passenger aircraft.

While Boom had previously showed off Overture's design with renderings, CEO Blake Scholl said at a press conference during the show that over the past five years as the company has worked to make the aircraft a reality, it's had time to test and refine the design, eventually landing on the new four-engined airframe.

Boom says it can make supersonic flight commercially viable and bring the service back to commercial aviation for the first time since the Concorde, and has an ambitious timeline with plans to launch production by 2024, introduce the first prototype the following year, and conduct the first test flight in 2026, targeting certification and first deliveries by 2029.

The company has drawn skepticism, however, most recently focused around the fact that the company has not finalized an engine for the proposed plane despite being in talks with Rolls Royce. Some observers also doubt that the plane, which Boom says will be able to carry 65 to 80 passengers, will be economically viable for airlines, while others doubt the company's ability to be carbon neutral, as it has pledged

Nevertheless, United Airlines last year said that it would purchase 15 of the jet — with options for 35 more — once it becomes certified, and Japan Airlines invested $10 million in Boom in 2018.

As is the custom at airshows, planemakers took the opportunity to show off their newest aircraft, both on the ground and in the air.

The flagship Airbus display on the ground was a brand new A350-900, complete with its new business class. It also had an Air Baltic A220 on display.

ITA configures its A350 with 33 business class seats and 301 seats in economy.

While interiors on both were configured for flight testing, featuring a range of instruments, sensors, computers, and water tanks to shift weight and balance around, it was only the second time the company has allowed an up-close look at the 777X — the first was the Dubai Airshow in November — and the first time with the MAX 10.

Each afternoon at the airshow features a flying display, with commercial aircraft, military jets, helicopters, and more, changing each day.

The 777X wowed crowds, as in Dubai, with stunning hard turns and banks, while the MAX 10 put on a similar show, just at a smaller size.

Airbus put on a good show with its A350 testbed as well, while Embraer had some fun with it's E190-E2 unique shark livery.

On the military side, a TAI/AgustaWestland T129 ATAK helicopter put on a wild display, while U.S. Air Force and RAF F-35 fighters wowed the crowd with their ability to hover and perform short take-off and landing maneuvers.

A major theme of the show was sustainability and the airline industry's commitment to hitting so-called "net zero" carbon neutrality by 2050.

The need for environmental action was evident and underscored during the first two days of the show, with temperatures over 100°F setting new all-time records for the U.K.

Still, aside from some partnership announcements and conversations behind closed doors and on exhibition stages, there wasn't much in the way of new direct action.

While the main part of the show may be over, more deals could be finalized in the coming days, weeks and even months — for instance, Boeing's MAX sale to Qatar was only finalized Thursday morning.

Next summer's airshow takes place outside of Paris — each year, Farnborough and Paris switch off — and could see a very different commercial landscape, depending on what happens with the war in Ukraine, the expected coming recession, and the COVID-19 pandemic.

Nevertheless, this year's Farnborough Airshow marked a new chapter for the airline industry as it continues to work to move past the damage inflicted by the pandemic.