Articles
Caroline Blair is a reader advocate intern for TPG. She is a senior at Syracuse University studying journalism and marketing. She studied and lived in London, her favorite city, for 5 months.
Follow
July 17, 2019
•
4 min read 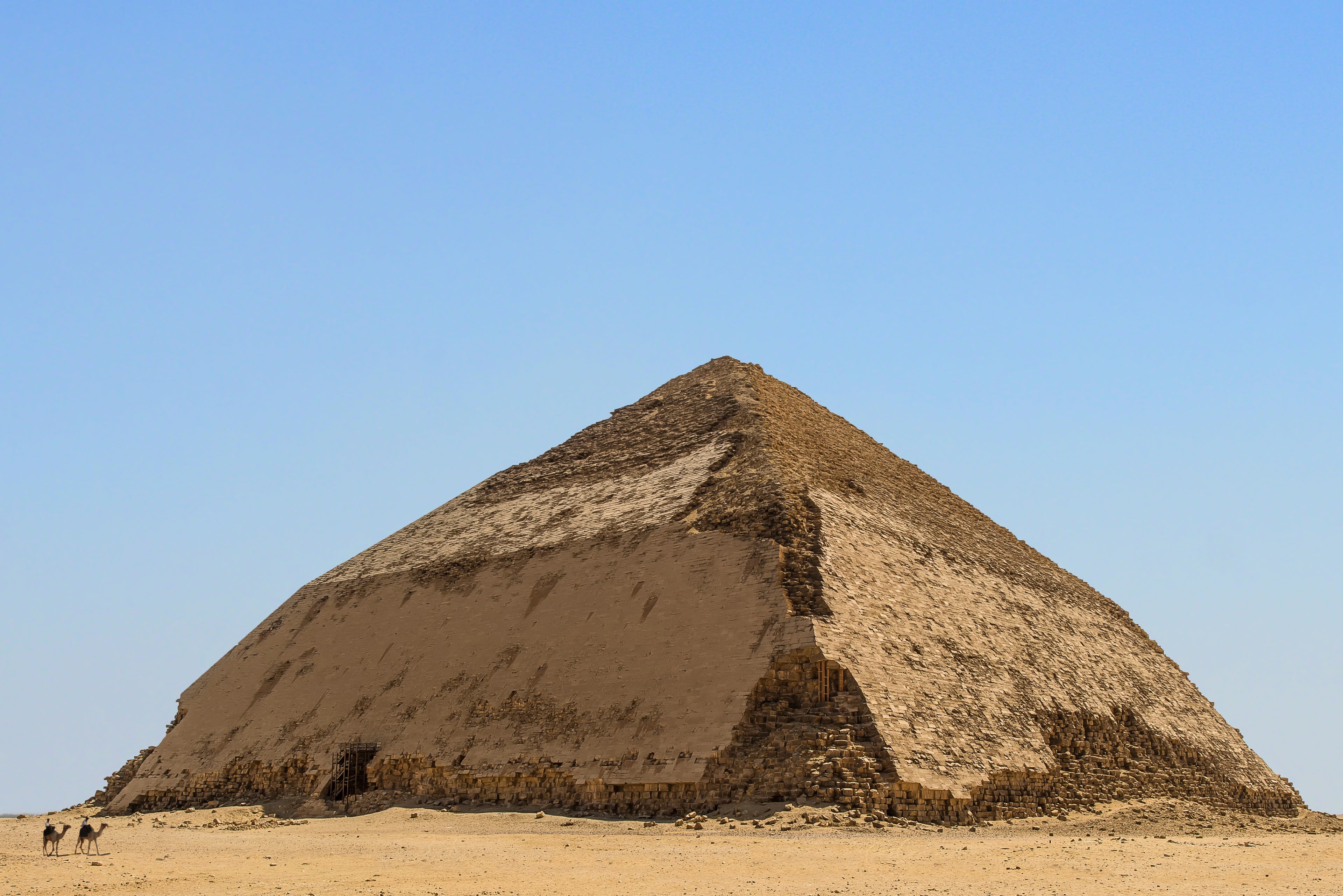 Egypt Opens 4,600-Year-Old 'Bent' Pyramid To The Public
This post contains references to products from one or more of our advertisers. We may receive compensation when you click on links to those products. Terms apply to the offers listed on this page. For an explanation of our Advertising Policy, visit this page.

Those considering traveling to Egypt have two more reasons to visit. Egypt has opened the "bent" pyramid for visitors to explore for the first time since 1965, as well as a satellite pyramid. The pyramids, located 25 miles south of Cairo in UNESCO World Heritage Site Dahshur, re-opened to visitors on Saturday.

The "bent" pyramid, formally known as King Snefru's Bent Pyramid, allows tourists to venture down a 260-foot narrow tunnel into two rooms. The 4,600 year-old pyramid is unique for its two internal structures and the way the angle of its slope decreases towards the top of the pyramid, making it bent.

The smaller, 59-foot satellite pyramid was possibly built for King Sneferu’s wife Hetepheres and is open to the public for the first time since 1956. The Ministry of Antiquities also announced archaelogists have uncovered funerary masks, mummies and wooden sarcophagi near the pyramids.

Egyptian tourism has been recovering since visitor numbers fell after the 2011 revolution. Almost nine million tourists visited in 2018 compared to 5.4 million in 2016, according to government figures.

With the addition of two pyramids, it could be a convenient time to add Egypt to your bucket list. EgyptAir just launched a nonstop service from Washington, DC to Cairo in early June with its new Boeing 787, a major improvement over its existing inflight product. It also flies to Cairo nonstop from New York JFK and Toronto. EgyptAir is part of the Star Alliance, so you can use United miles (a Chase Ultimate Rewards transfer partner) or Avianca Lifemiles (a Citi ThankYou and Amex Membership Rewards partner) to book award seats. A one-way business class award from New York to Cairo would run you 80,000 United miles or 78,000 Lifemiles.

A St. Regis is opening in Cairo in December, which can be booked for 35,000 Marriott Rewards points per night. Hilton has plans to add 2,500 hotel rooms by 2022. In the meantime, there are other points hotels you can book:

The JW Marriott Cairo and Cairo Marriott Hotel & Omar Khayyam Casino both begin at 25,000 points. For a Category 2 option, Le Meridien Heliopolis begins at 12,500 points. If you'd like to splurge on a Category 5, the The Nile Ritz-Carlton, Cairo begins at 35,000 points or a 35k free night certificate.

For Hilton Honors devotees, there are a few properties to choose from as well. The Ramses Hilton begins at 20,000 points, or check out the Conrad Cairo beginning at 30,000 points.

Cairo has no shortage of other historic attractions as well. The Pyramids of Giza and Great Sphinx of Giza are both located an hour n orthwest of the "bent" pyramid. The Tomb of Mehu, a 4,000-year-old tomb from the time of King Titi in the Sixth Dynasty, opened to visitors in September of 2018. Egypt also plans to open the Grand Egyptian museum, the largest museum in the world devoted to a single civilization, by the end of the year.