Articles
Darren Murph holds a Guinness World Record as the planet's most prolific professional blogger. He's an explorer at heart, having traversed nearly 50 countries and all 50 US states. He's flown over one million miles on Delta alone, and serves as a senior writer at TPG.
Follow
March 02, 2019
•
4 min read 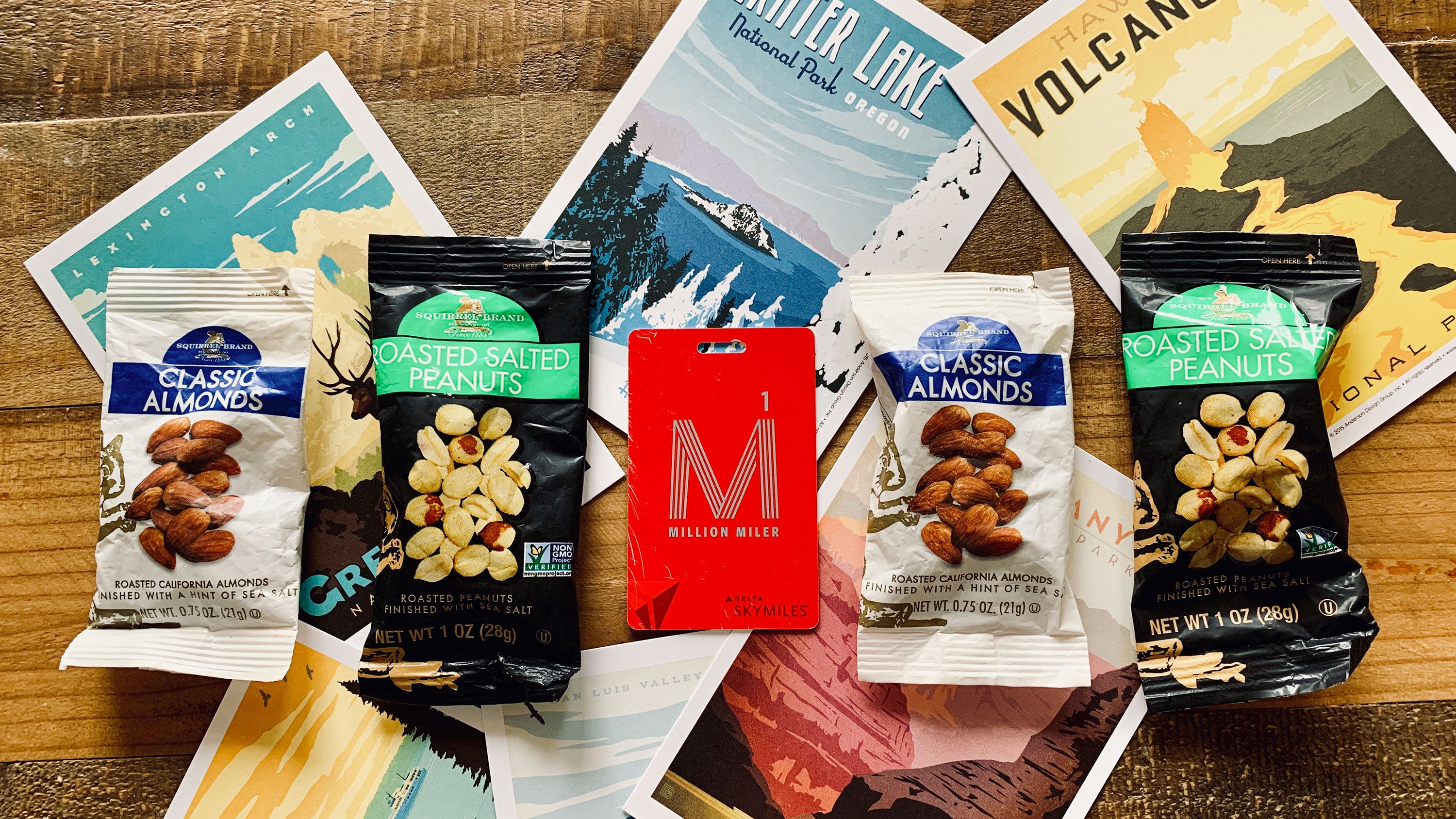 Nut Job: Delta Swaps Peanuts For Almonds In Polarizing Snack Basket Refresh
This post contains references to products from one or more of our advertisers. We may receive compensation when you click on links to those products. Terms apply to the offers listed on this page. For an explanation of our Advertising Policy, visit this page.

The year is 2076. Tensions between rival factions are at an all-time high, with society seemingly numb to the fact that war is inevitable. The key issue dividing the world has little to do with politics. Rather, it's about food. Specifically, complimentary airline snacks.

You see, there is likely no actual end to the debate surrounding peanuts versus almonds, and it's being resurfaced once more with Delta's latest onboard refresh. Tucked within an announcement highlighting new seasonal menus and wine for Delta One customers is confirmation that Squirrel Brand almonds will be making their triumphant return while salted peanuts have reached their final destination.

Frequent Delta flyers will note that this isn't the first time peanuts have been put to pasture in favor of almonds, so there is hope for pro-peanut supporters that we'll one day see them again on Delta flights.

Given the profound nature of the announcement, I phoned Delta to get a better understanding of the move. Why almonds over peanuts, and why now? As it turns out, Delta has no internal bias towards nuts nor legumes (which peanuts technically are). Per a company representative: "Delta regularly rotates snacks and has switched almonds for peanuts in the past as part of efforts to ensure even the most seasoned of travelers have something new to look forward to."

As part of the new rotation, Cheez-It crackers will be replacing the Perfection Snacks Snack Mix presently onboard — evidently perfect in label alone.

Thankfully, the airline's signature Biscoff cookies and gluten-free Kind Dark Chocolate Chunk Bars made the cut and will be hanging around.

In other words, Delta is doing what it can to keep snack selections fresh.

The upside here is that Cheez-It crackers are universally understood to be wonderful, and roughly half of the population will rejoice at the sight of almonds. The downside is more obvious: Those who understand the greatness of peanuts won't see the carrier's addition to the snack lineup as a wise move.

When I asked if the change had anything to do with allergies, I was told that it did not. Even during periods when peanuts were the go-to snack on Delta flights, the risky nuts would be excluded if a passenger with a peanut allergy was onboard. Here's the official word on that: "As part of Delta’s focus on creating the safest cabin experience for all customers, our agents and flight attendants are trained on how to best support customers with allergies. This includes refraining from serving peanut products onboard when a peanut allergy is known, making cabin announcements to alert other customers of the allergy so they can refrain from opening personal peanut snacks in flight, and offering pre-boarding to customers with allergies so they can cleanse their immediate seating area. We encourage customers with known peanut allergies to notify Delta through Reservations before their flight so accommodations can be made."

Additionally, even as airlines continue to cut costs anyway they can, anyone who's dropped an Alexander Hamilton on a jar of almond butter can tell you pricing clearly is not the reason for the change. While almond prices on a per-pound basis are nearly half of their peak price a few years back, the ~$2.40 per pound still trumps the sub $1 per pound needed to buy peanuts in bulk today.

For those who favor almonds, expect to see them filtering onto Delta cabins in the coming days. For those who are downtrodden about the (hopefully temporary) loss of peanuts, a man resembling the author of this post has been seen wiping out the supply at stores across the country, so stock up now.

All images by Darren Murph / The Points Guy

Featured image by The debate rages on: peanuts or almonds? (Photo by Darren Murph / The Points Guy)