Articles
Ethan Klapper is a senior aviation reporter at TPG who focuses on the operational side of the airline industry.
Follow
Oct. 11, 2022
•
8 min read 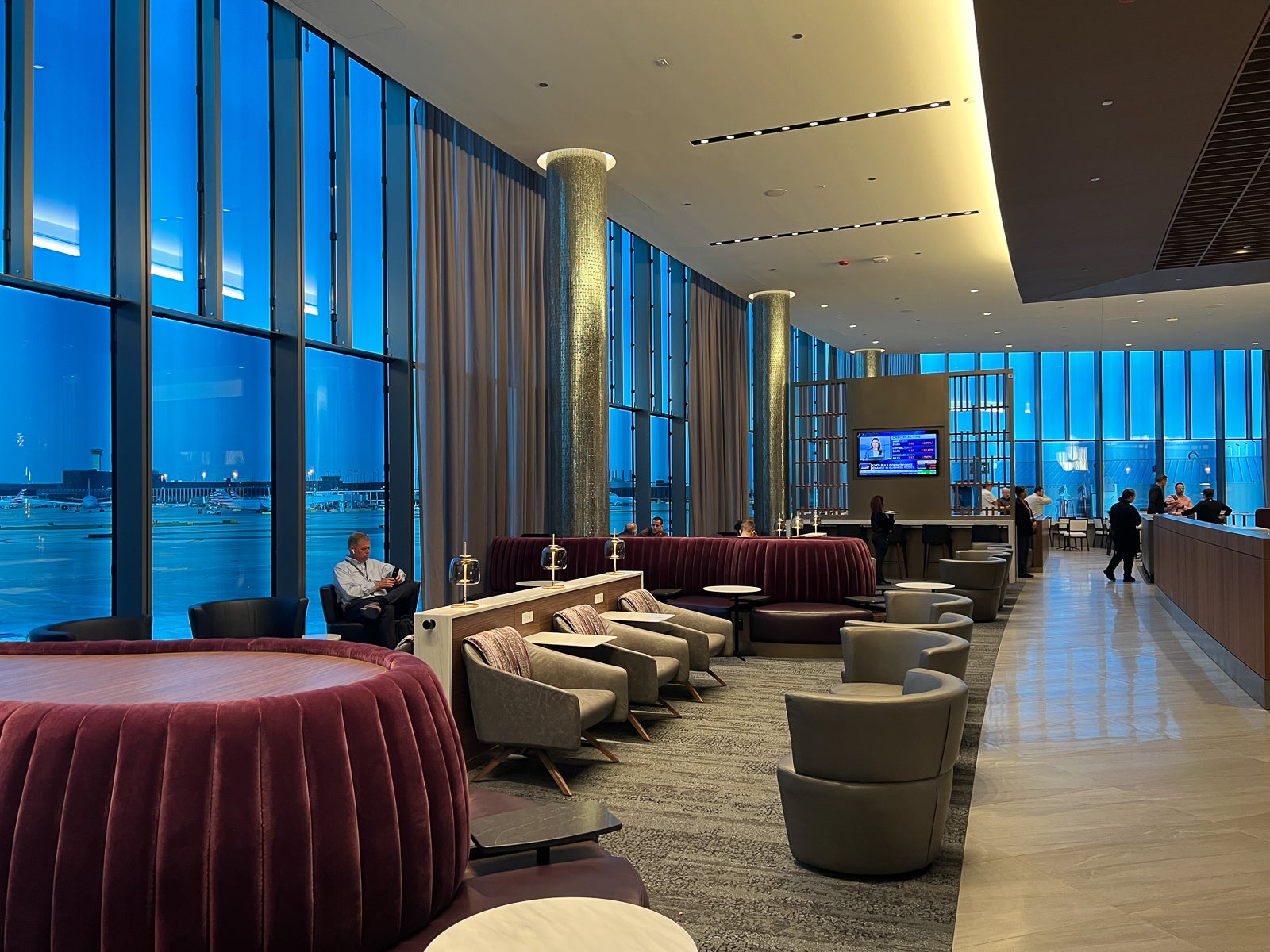 Chicago's O'Hare Airport might be the hometown hub of United Airlines and a major hub for American Airlines — but that doesn't mean that Delta Air Lines isn't investing in the Windy City.

In fact, Delta on Tuesday took the wraps off its newest Sky Club in its new Chicago home, Terminal 5. The new lounge and the new gates come as part of a $1 billion project to renovate and expand T5 — of which Delta invested $50 million. (Delta vacates its longtime home in Terminal 2's E concourse on Wednesday, with those gates being reallocated to United and Alaska Airlines.)

The new, 22,600 square-foot lounge will hold nearly 400 travelers — roughly four times as many as could fit in the Sky Club's previous Chicago outpost. That will be incredibly welcome news for customers as Sky Clubs contend with severe overcrowding. And, it's the first Sky Club to feature boarding from inside the lounge — a rarity at a U.S. airport.

TPG got a first-look tour at Delta's new Chicago home on Tuesday, a day before the space opened to the public.

Until Wednesday, all of the gates at Terminal 5 were what is considered common-use: owned and managed by the City of Chicago, O'Hare's operator, and assigned on a daily basis. Delta, on the other hand, will have permanent ticket counter space, and will always use the same gates (nine gates opening Wednesday, with a tenth and final gate opening next August).

Delta's new Sky Club — and its gate areas — are a short walk past the TSA checkpoint. Clear — a staple in terminals where Delta has a significant presence — will not be offered on day one at T5, but the airline is working to bring the expedited security program to Chicago.

The most unique feature of the new Chicago O'Hare Sky Club is that it's the first to offer passengers the opportunity to board select flights directly from inside the lounge.

In fact, there are two gates capable of this type of boarding.

The primary gate Delta will use for that is gate M11, which will be used for flights to the airline's LaGuardia hub.

The gate isn't explicitly labeled in the Sky Club, but there are some hints: a boarding pass reader, as well as a gate information display screen that will show flight information.

Why LaGuardia? There's a "strong business connection to New York," Claude Roussel, Delta's managing director for Sky Clubs, told TPG in an interview. Delta competes fiercely against United and American in the LGA to ORD market.

On the opposite side of the lounge is gate M14, which will be used by Delta's partners that operate from T5, including Air France, KLM and Korean Air.

It's the first time Delta is under the same roof as its major international partners in Chicago, and that fact guided some of the lounge design.

"We would have not put showers in this lounge if it was for a domestic market," Roussel said. Indeed, Delta's existing lounge at ORD does not have showers.

There are multiple different seating areas in the 400-seat lounge.

The types of seating Delta chooses is data-driven based on the types of travelers who use the lounge, Roussel said. Business travelers tend to prefer more solo seating options, while families prefer communal seating.

At the new ORD club, there are individual seats, couches, high-top tables and swivel chairs that rotate 360 degrees and can be pointed directly at the window for prime AvGeek views.

And, in what has become a staple of Delta's newest Sky Clubs, the lounge features a media wall with multiple channels of TV playing at once, as well as comfy seating around it. Don't worry about lounge disruptions — the volume will always be muted.

The lounge will also offer quiet pods — perfect for business travelers to get work done with minimal distraction, or to hold a phone call.

As at the gate areas, multiple types of charging were available, including 110-volt outlets, along with USB-A and C. Some surfaces also support wireless device charging through the Qi protocol.

The warm tones of the lounge are designed to feel welcoming, Roussel said.

"When you come into a lounge, we want you to feel like you've entered a nice hotel lobby," he said.

A key differentiator between Delta's Sky Clubs and its competition is the elevated food and beverage program — and that continues in Chicago.

The new Sky Club in Chicago features a kitchen that's significantly larger than that in the club it replaces — allowing for more varied, fresher food items, as well as the opportunity to bring in guest chefs for special events.

The new club features two massive buffet lines serving a wide variety of foods, including chicken and waffles, a large charcuterie board and fruit and yogurt parfaits. Hot options include apple barbecue chicken thighs and macaroni and cheese. Roussel talked about offering all-day brunch as part of the menu in the future.

As is typical at Sky Clubs, a bar offers a mix of free and for-purchase alcoholic beverages. The bar is shaped like a peninsula, allowing customers to access it on three sides.

A secondary bar is in the rear of the lounge. It's primarily a wine bar, but other drinks can be ordered from it as well.

Soft drinks are available from a self-service soda fountain, as well as a fountain that dispenses still and sparkling water. Espresso machines are available for a caffeine jolt, as is drip coffee.

Finally, for a uniquely Chicago touch, a cart will offer up Chicago-style hot dogs.

As is the case at other new Sky Clubs, access to the suites is via a virtual queue system. A kiosk for the queue is located at the front of the lounge, as well as near the showers.

Each shower suite features a toilet and sink, in addition to the shower, with towels and a hair dryer provided. Toiletries are by Grown Alchemist, building on a partnership with the label that Delta has for its premium Delta One cabins.

Delta's new Sky Club is full of original artwork — either by artists with ties to Chicago or pieces that feature the Windy City prominently.

"We have pieces all over and the goal is always to bring back the city," Roussel said.

Delta's massive investment at O'Hare is a testament to the importance of this key business market to the Atlanta-based carrier. You wouldn't know that ORD ranks 14th in daily departures for Delta stations if you saw the upgrade to the gates and Sky Club that will open on Wednesday. The space is warm and inviting —and offers better amenities than any United Club or Admirals Club that currently exists at ORD.

With such an appealing space, Delta now must contend with the challenge of managing overcrowding in the new lounge. While the space is four times larger than its old lounge, it will now also directly serve premium cabin passengers and SkyTeam elites who fly on Delta's partner airlines.

While Delta isn't opening an ORD hub anytime soon, the carrier's new space is a big treat for its loyal passengers.