Buffet breakdown: Which cruise lines have self-serve buffets, and which ones don't?

Articles
Ashley Kosciolek has spent more than a decade writing about travel, with particular emphasis on cruises. Her favorite cities include London; Amsterdam; Krakow, Poland; Phnom Penh, Cambodia; Dawson City, Yukon; and anywhere known for outstanding pizza and theater. You can follow her daily exploits, both at sea and on land, on Instagram or Twitter @slyjabroni.
Follow
May 21, 2022
•
6 min read 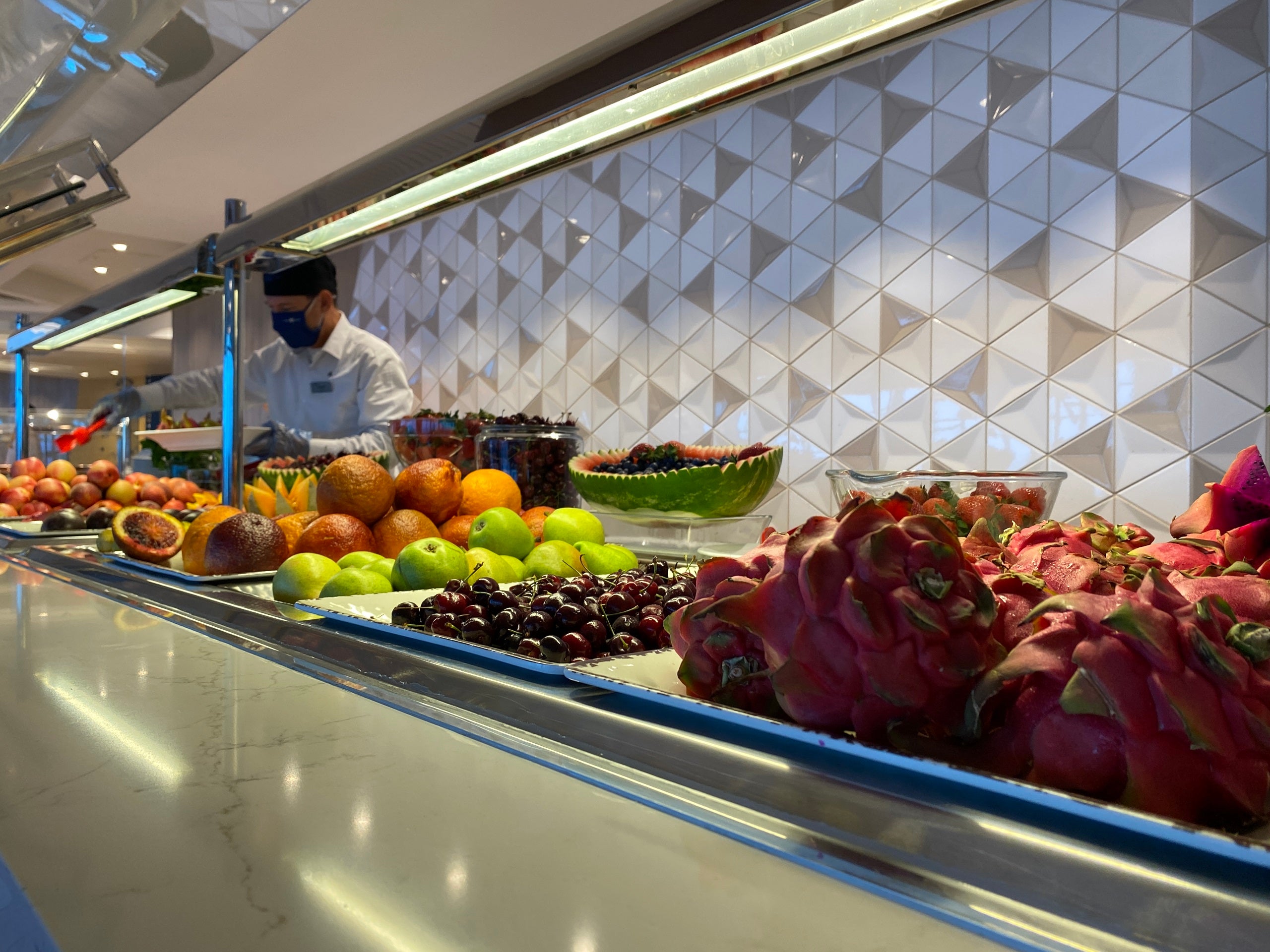 It's time to pick up the tongs. Nearly a year since big-ship cruising restarted for U.S. passengers, a few things have changed with regard to onboard protocols — capacity is increasing, social distancing is practically nonexistent and masks are optional. But perhaps none of the changes is as disturbing to me as the return of self-service buffets, with six of the industry's eight major lines allowing passengers to, once again, serve themselves.

Don't get me wrong, I love a good buffet setup. What I don't love, however, is the blatant disregard of buffet etiquette by some passengers. I've seen people sneeze and then touch the communal serving utensils without washing up or — worse — simply forgo said utensils and grab food with their bare hands. Gross!

That's why I was so excited when, as an initial COVID-19 precaution, several cruise lines decided to make their buffets crew-served. Sure, it takes additional staff, and it can be annoying when someone else is in charge of your portions. But it's more sanitary — since some viruses (though not COVID-19) spread via contaminated surfaces — and it also helps to control waste. You can always go back for seconds (or thirds or fourths) if you want more.

But now that protocols are being relaxed, several lines have reverted to self-service. Others never offered a different option in the first place. Here, I'll run down a list of brands that have the serving spoons on the passengers' side of the sneeze guards, as well as the ones that are still holding out.

Unlike several other cruise lines, Carnival's buffets were always of the self-serve variety, even immediately after the line's July 2021 post-shutdown restart. Passengers on all Carnival vessels are able to serve themselves in the onboard buffets.

"Because the crew are all vaccinated, and because 95% of guests are [vaccinated] as well, and after all the professional advice we have taken, the buffets … are going to be exactly as they were, meaning you will serve yourself," Carnival brand ambassador John Heald said of the decision in a June 2021 Facebook post.

Along with sister brand Royal Caribbean, Celebrity was one of the first lines to say it would temporarily scrap self-service buffets. But the move might not be so temporary after all.

"For the foreseeable future, our buffets will be crew-served and not self-serve," the line told The Points Guy.

When Disney first brought its ships back into service, it employed crew-served buffets to help minimize the risk of germ spread. Effective April 1, 2022, its vessels' buffets are back to being self-serve.

Because of its slightly older clientele, Holland America has always been cautious when it comes to buffets. Even before "coronavirus" became a household word, cruise lines had to contend with norovirus.

HAL ships switched to crew-served buffets several years prior to the COVID-19 pandemic, partially in an effort to combat potential outbreaks of norovirus, which is easily spread via contaminated surfaces. The line continues to employ the practice on all of its vessels.

"We made the switch to align with premium [cruising] and our goals for service," a representative from the line told TPG.

The first mainstream cruise line to restart operations with Mediterranean voyages in December of 2021, MSC Cruises initially began sailings with crew-served buffets. Effective April 1, 2022, it is back to allowing passengers to serve themselves.

Norwegian has been one of the most stringent cruise lines in terms of COVID-19 precautions. In the beginning, it was the first — and one of the only — lines to require full vaccination for all passengers, as well as crew members. That has since been relaxed.

As part of NCL's initial return to service, the line had the crew serve cruisers at its buffets, but it has since reverted to self-serve.

Princess' cruise ships currently allow for self-service, with passengers able to pick up their own plates and utensils and scoop their own fare in most areas at the onboard buffets. Some stations are still served by crew members, however.

As one of the trailblazers in the crew-served buffet arena, Royal Caribbean required passengers to ask the crew for what they wanted when the line's sailings first returned in 2021. Starting April 2, 2022, the brand brought back self-service and issued the following statement:

"Royal Caribbean International will bring back self-service dining in ... the Windjammer Marketplace, Solarium Bistro and at private destinations. Grab-and-go dishes and single-serving portions will continue as a permanent offering."

Related stories
Real ID requirements for air travel in US delayed until 2025
Another major cruise line to sharply hike onboard fees
Save money with these travel-related offers on your credit cards this month
Use these shopping portal bonuses to earn extra miles this holiday season
Featured image by Crew serving fruit at the buffet on Celebrity Cruises' Celebrity Millennium. (Photo by Ashley Kosciolek/The Points Guy)
Editorial disclaimer: Opinions expressed here are the author’s alone, not those of any bank, credit card issuer, airline or hotel chain, and have not been reviewed, approved or otherwise endorsed by any of these entities.