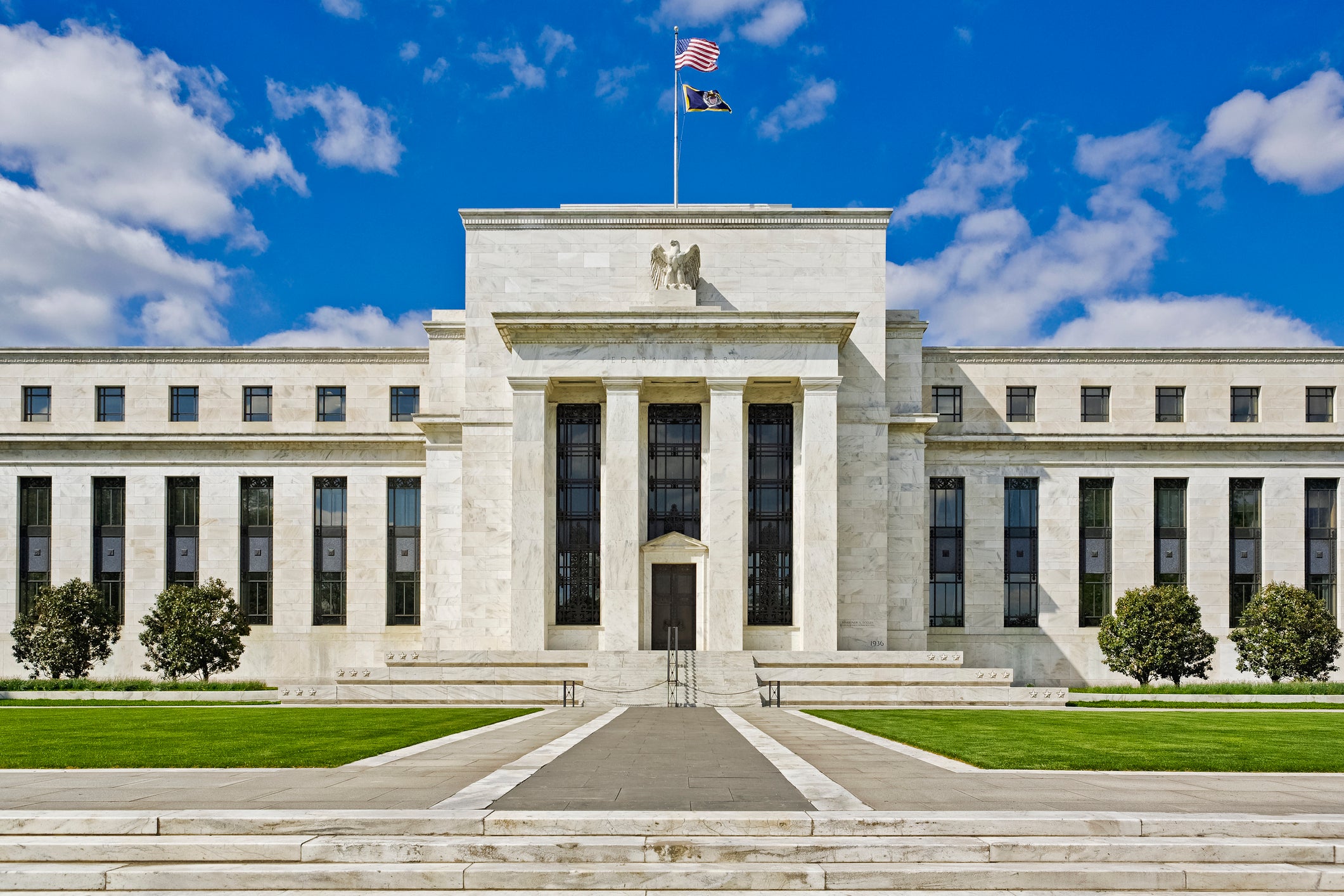 /strong> This post has been updated with new information.

Back in March 2020, the U.S. Federal Reserve cut its benchmark interest rate to almost zero in a historic move to help protect the economy during the COVID-19 pandemic. Prior to this, slashing rates had only been done once before — during the global recession of 2008.

But with a new administration sworn in and differing economic outlooks for 2021, what is the likelihood that the Fed will keep rates low? And what would this mean for cardholders? I sat down with Bankrate's U.S. economics reporter Sarah Foster to discuss the current state of the Fed and her predictions for 2021.

Want more TPG news and advice? Sign up for our daily newsletter

What is "the Fed" and what does it do?

The Federal Reserve, America's centralized bank, plays a large role in the overall economic health of U.S. financial institutions. Investors and economists look to the Fed to steer the financial system in America, but what the Fed does impacts more than just those in the finance industry.

The Federal Open Market Committee (FOMC), made up of the board of governors and the 12 regional reserve banks, comes together to conduct monetary policy and set the benchmark for interest rates. The Fed can help make sure the U.S. economy doesn't grow too fast (which can cause a crash), but it also helps the U.S. maintain financial stability in a recession or other times of distress (such as the COVID-19 pandemic).

While the Fed has a number of responsibilities pertaining to economic policy, it garners the most attention when the FOMC sets interest rates. During times of financial crisis, the Fed can cut rates to help prop up the U.S. economy so that it can weather the storm — which is what it did back in 2020 by slashing rates to essentially zero. The move was an impressive one from current Fed Chairman Jerome Powell, who led his agency to cut rates in just eight days (compared to the 15 months it took the institution back during the 2008 financial crisis).

But something else to keep an eye out for is the Fed's bond-buying strategy. Since mid-2020, the Fed has been buying about $120 billion in Treasury and mortgage-backed debt a month as a way to keep credit cheap and accessible right now.

What does the Fed rate have to do with credit cards?

"When people say the Fed 'cut' rates, they actually mean the Fed reduced an interest rate that serves as a benchmark for other borrowing costs," explained Foster. "Basically, when the Fed’s rate falls, so do others. It’s distributed throughout the economy as a result."

The prime rate — the interest rate commercial banks use as a starting point for the interest rates they charge customers— is one example of a rate that is directly affected by the Fed's rate. The 2020 cut did lead to a drop in the average annual percentage rate (APR) across credit cards this past year, but it's unlikely you saw that directly impact your credit card interest rates.

Cardholders have seen lower APRs, but not a drastic change

After the Fed cut rates, the U.S. prime rate was set to 3.25%. Now, credit card companies charge a steep margin on top of the prime rate. It's one of the ways they make money, in addition to fees, such as an annual fee. That's why credit card debt is generally more expensive than some other types — while the prime rate has hovered between 4.0% and 5.5% in the two years leading up to 2020, the average credit card APR had been closer to around 16% to 17%.

As of now, rates have dropped from an average of 17.54% over a year ago to 16.05% since the Fed rate cut, according to CreditCards.com. That's less than a full percentage point difference, though, meaning you were unlikely to see any real impact across your credit cards. If anything, you may have seen an increase in interest rates and lower rates of approval for new lines of credit as banks tried to mitigate as much risk as possible throughout most of 2020.

Related: Ways to use a credit card responsibly

Is the Fed likely to keep interest rates low throughout 2021?

"It’s low rates for as far as the eye can see at the Fed," said Foster. "Chairman Powell, who leads the rate-setting Federal Open Market Committee to consensus, has said that the central bank is gong to be extremely cautious before they want to lift off on the support they’re providing for the economy."

Overall, the Fed isn't looking to hike interest rates anytime soon. Bankrate's December 2020 Fed Forecast survey reported half of the economists surveyed to believe we'll see 0% interest rates through 2024. And even the Fed's officials' forecast shows rates at zero for as far out as the chart lists (2023).

According to Foster, the Fed's current strategy has been to keep credit cheap and available and strive for a low unemployment rate — meaning it will want to give the U.S. labor market a long time to recover from the economic stressors caused by the coronavirus pandemic.

Will a shift in administration mean a change in leadership and strategy from the Fed?

Powell has a good reputation on both sides of the aisle with a reputation for staying out of politics. Paired with his leadership during a major regime shift within the Fed and a stellar track record of handling the economic crisis of the pandemic, it's not unlikely that he'll secure a second term as chairman. It's possible Biden may want to push for a more progressive candidate, but 56% of economists polled for Bankrate's December 2020 Fed Forecast survey predicted Powell being reappointed in 2022.

The Fed has made it clear that it plans to continue its bond-buying strategy and keep interest rates low for the foreseeable future, which has led to some concerns that this might lead to higher inflation down the road.

"Fed officials might cheer that news at first because they’ve been struggling to get inflation up to target for more than a decade," said Foster. "But for [people] living on fixed income or retirees, rising price pressures tend to eat away at your purchasing power."

Others have raised concerns over potential financial instability. While the Fed has talked down both of these concerns, that doesn't mean they are outside the realm of possibility.

At the end of the day, her financial advice remains the same: Continue to save where you can and pay off high-cost debt. The Fed has delved into some never-before-seen territory here, so there's no cut-and-dry answer to what these unprecedented moves will mean for the future of the U.S. economy.

While the lower interest rate from the recent Fed rate cut may not have a massive impact on your credit card debt, one option to avoid interest when paying down debt or financing larger purchases is a 0% APR credit card.

Some cards offer a certain period of time (generally between 12 and 18 months) where you won't be charged interest on new purchases, balance transfers or both. If you have credit card balances that are accruing interest each month, you can save a lot of money by transferring those balances over to a balance transfer credit card and paying off that debt during the 0% APR period.

Alternatively, if you know you'll need to carry a balance to either make ends meet or to finance a larger purchase (some TPG staffers have invested in Pelotons, for example), you can use a card with a 0% APR intro period on new purchases to give you extra time to pay off expenses.

In either case, just make sure you're paying off your balance before the intro period ends to avoid racking up interest once the regular APR kicks in.

The Fed rate cut plays a significant role in the overall financial ecosystem. Cutting rates incentivizes banks to lend out money and can encourage consumer spending. Both help funnel money into the economy.

The moves the Fed and Congress have made over the past year to keep the U.S. economy from a full-blown meltdown made a significant impact in a lot of areas, but credit card consumers didn't see a lot of this impact first-hand. In fact, we saw lower credit limits and lower levels of credit card approvals from most issuers over the past year.

At TPG, we encourage paying off your bills in full each month. Of course, in times like these, that may not always be feasible for every cardholder. For those who do have to hold a balance, the rate cut from the Fed could mean a lower APR — at least in the short term.