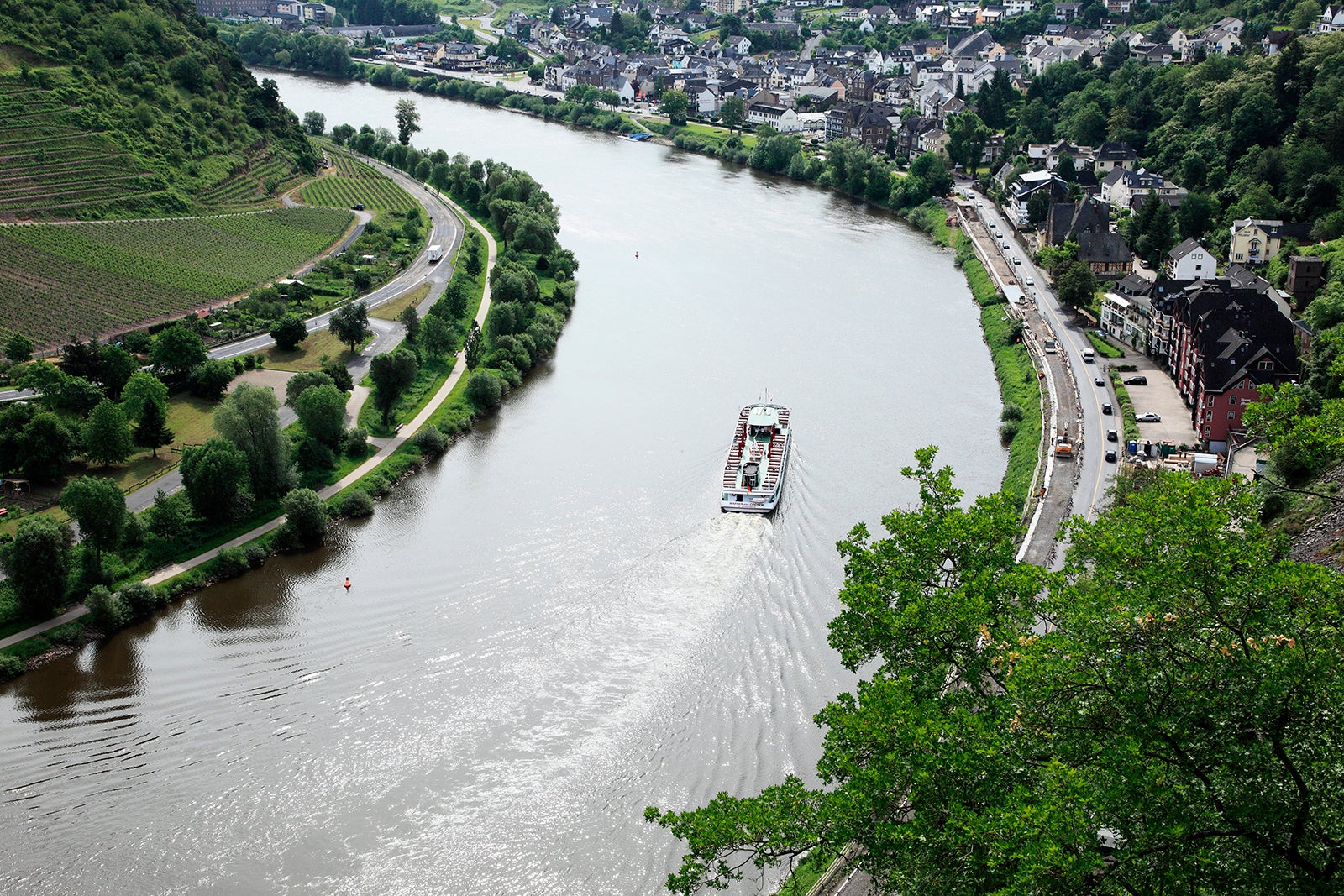 Could Low Water Levels Ruin Your European River Cruise?
This post contains references to products from one or more of our advertisers. We may receive compensation when you click on links to those products. Terms apply to the offers listed on this page. For an explanation of our Advertising Policy, visit this page.

When Julia Slater signed up for an AmaWaterways cruise on the Danube last year, she was expecting a voyage from the historic German city of Nuremberg through southern Germany, Slovakia and Austria to Budapest, Hungary. But just days before the seven-night trip was set to begin, in late October, she got some troubling news. Low water on the river was forcing a change of plan.

“We were notified they were switching our embarkation from Nuremberg to Vilshofen, Germany,” said the 50-year-old purchasing and compliance manager from Moorestown, New Jersey, who had booked the sailing with her husband and two other couples. “And we were told at that point that there was a really good chance the ship wouldn’t be able to make it all the way to Budapest.”

The Slaters and their friends weren’t the only ones getting such notices. Historically low water levels on the Danube and the Rhine last year, caused by unusually warm and dry weather conditions across central Europe, disrupted hundreds of river cruise departures operated by AmaWaterways, Avalon Waterways, Viking River Cruises and other lines.

In most cases, the disruptions were relatively minor, affecting just a day or two of the itinerary. But as frustrated passengers have recounted in great detail at online sites such as River Cruise Advisor, some voyages were significantly altered. Some cruisers found themselves being bused long distances to destinations on their itinerary that had suddenly become unreachable by ship. In some extreme cases, passengers were moved to hotels for part of their trips when their vessels could go no farther. A few voyages were canceled outright.

It's also the sort of thing that happens very infrequently.

Should you worry about low-water levels affecting your river cruise this year and beyond? Probably not as much as you think. Years like 2018 are extremely rare.

“The last time there was anything even close to this was 2003, and the last time before that was 100 years ago,” said Pam Hoffee, managing director of Avalon Waterways.

In a typical year, just a handful of sailings in Europe are affected by low (or high) water, Hoffee told TPG. In some years, such as 2017, pretty much every voyage goes off without a hitch.

“The reality of river cruising is that it does rely on the right level of water, but in general the water levels are fine,” she said.

Even during years marked by drastically low water on Europe’s rivers, such as 2018, disruptions to itineraries aren’t across the board. Rudi Schreiner, president and co-founder of AmaWaterways, estimates only about 80 of the line’s 600 departures in Europe in 2018 were impacted. As Schreiner noted, only the Danube and the Rhine were affected by the warm and dry weather across central Europe, and not until the second half of the summer into the fall. Water levels on France’s Seine and Rhone rivers, and on the Douro in Portugal, were generally fine.

As the Slaters experienced, the typical disruption didn’t have a huge impact on the vacation experience. Instead of boarding their ship, the 162-passenger AmaSonata, in Nuremberg, the couple met it about 140 miles to the southeast in Vilshofen, an area just below a known choke point on the Danube that often becomes impassable during periods of low water. The change meant they missed touring Nuremberg completely. They also had to be bused more than an hour to what was supposed to have been their first port stop, the medieval city of Regensburg, Germany.

On the flipside, AmaWaterways replaced the lost day at Nuremberg with a stop at the cozy Danube town of Grein, Austria, where passengers were treated to a tour and Champagne reception at the town’s perfectly preserved 15th-century castle.

“It was an awesome excursion that we wouldn’t have experienced if we had done the regular trip,” said Slater, who gives AmaWaterways high marks for rearranging the schedule on the fly. “It actually was one of my favorite stops of the entire trip.”

Slater said AmaWaterways also gave everyone on board a free excursion to Salzburg, Austria, something that normally comes with an extra charge. And when she got home, she received a credit for about $750 off a future cruise as an apology for the changes.

“I really didn’t expect that,” she said, noting that, despite the initial warnings, her ship was able to travel all the way downriver to Budapest, as planned. “The credit was very generous.”

Compensation of some sort is typical when river cruises are significantly disrupted. Schreiner said AmaWaterways gave passengers on seven-night sailings a 15 percent credit toward a future cruise for each day they experienced a disruption on a voyage.

Hoffee said Avalon in most cases refunded a portion of the cruise fare to passengers who had to spend a night or more in a hotel instead of on a ship — something that happened on about 10 percent of the line’s voyages. When Avalon knew in advance that passengers would have to spend time in a hotel, it also offered passengers the chance to cancel without penalty.

One of the places where river cruisers last year sometimes found themselves in a hotel instead of on board a ship, as expected, was Budapest. Toward the end of the year, the Danube got so low on the short stretch between Vienna, Austria and the city that lines had to stop ships in Vienna and bus passengers onward to Budapest — a journey of about two-and-a-half hours. They then put them up in hotels for the final day of touring.

Another strategy that river cruise operators employed in 2018 was what is known as "the ship swap." Passengers on a ship on one side of an impassable section of river change places with passengers on a sister ship on the other side of the impasse before continuing with the itinerary. Lines such as Avalon and AmaWaterways operate fleets of identical vessels, meaning that ship-swapping passengers end up in the exact same cabin they had occupied before. In some cases in 2018, passengers had to do more than one ship swap during a single voyage, which is extremely rare.

If the possibility of having to endure that sort of disruption is something you just can’t tolerate, it doesn’t mean you have to swear off booking a river cruise. Travel agents such as Porter point out there are travel insurance policies that will let you cancel a voyage at the very last minute without penalty if it looks like it might be disrupted by low-water conditions. They’re known as “cancel-for-any-reason” policies, and they’re offered by many river cruise lines as well as independent travel insurance companies. Some policies offer a full refund. Others give you a credit toward a future trip.

Avalon, for instance, offers a cancel-for-any-reason policy that will allow a customer to cancel a voyage up to 24 hours before departure for a credit that can be used on a later trip. The insurance costs from $249 to $379 per person, depending on the cost of the cruise.

One upscale river cruise operator, Scenic Luxury Cruises & Tours, has also offered a “river cruise guarantee” since 2017 that promises at least partial refunds for voyages marred by high or low water. Included in the cost of the cruise, the guarantee kicks in when a ship is unable to proceed, and passengers must be bused three or more hours to destinations on the itinerary. It also applies in the case of a ship swap that results in a delay of more than 24 hours.

Such policies could become more important if, as some people are predicting, unusual weather events like the extended dryness in central Europe in 2018 become more common due to climate change.

Still, river cruise industry leaders say they haven’t seen a pattern yet that gives them pause.

“It’s hard to say that [what happened in 2018] had to do with global warming,” said AmaWaterways’ Schreiner, who has followed river water levels in Europe closely for nearly three decades. “My feeling is this was a unique year. You will have these unique years maybe every 10 or 15 years.”

Schreiner noted that river lines are building 19 new vessels for Europe’s rivers this year. If there was serious concern in the industry about future water levels, you wouldn’t be seeing this, he suggested. “It seems like demand is still growing, and the cruise lines are not too concerned."

Also not too concerned? The Slaters and their friends. Despite the disruption to their October cruise on the Danube, the three couples have already booked another Europe river trip with AmaWaterways. It’ll be on the Douro in 2020. Even if there were to be a disruption due to water issues, Slater doesn’t see it as a dealbreaker.

“You’re still on vacation,” she said. “There’s still great food and drink, great people and you’re going to beautiful places. Can the trip really be ruined?”