Chefs at 35,000 Feet: The Secrets Behind Airline Menus

Articles
Mike Arnot is the founder of Boarding Pass NYC, a New York-based travel brand and a marketing consultant to airlines. A private pilot, he can sometimes be found above the skies of New York City.
Follow
March 19, 2019
•
8 min read 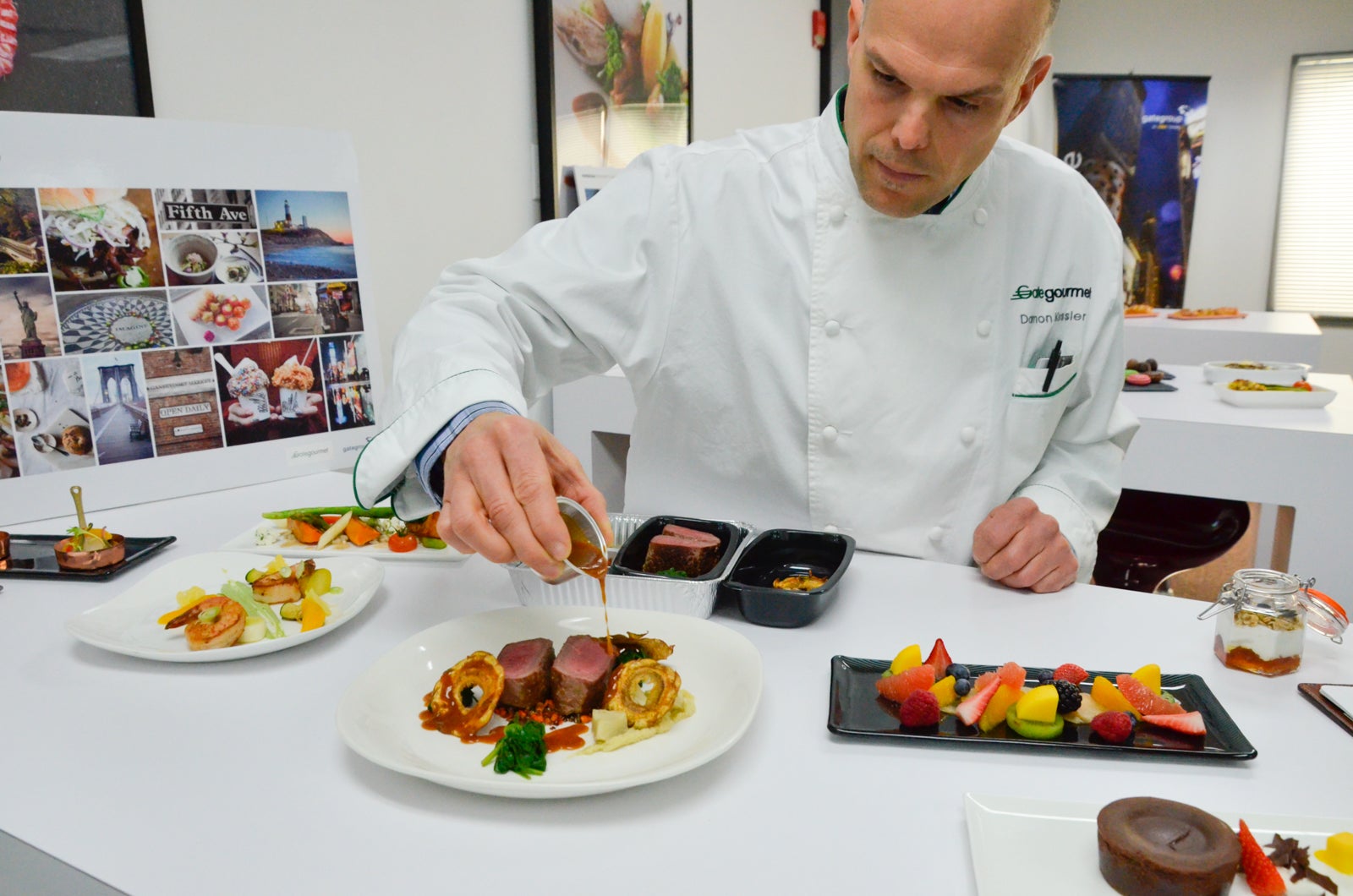 Chefs at 35,000 Feet: The Secrets Behind Airline Menus
This post contains references to products from one or more of our advertisers. We may receive compensation when you click on links to those products. Terms apply to the offers listed on this page. For an explanation of our Advertising Policy, visit this page.

Food service at the pointy end of the plane is where airlines try to shine. Helping them succeed is Gate Gourmet, the Swiss-based airline-catering company whose logo can be seen at airports worldwide. TPG recently visited Gate Gourmet's facility at New York-JFK, to check out the kitchen serving more than 13,000 meals a day for over 40 departing flights.

Months of preparation -- from kitchen to airline cabin -- are needed to serve up gourmet meals at high altitude. Part of the vision for the menu comes from the airlines' celebrity chefs, whom the carriers often tout in their advertising. After all, food is a major part of the experience when flying in premium class.

“We create the food in every class as if it’s (for) a passenger that’s never traveled internationally before," said Joe Nunes, general manager of Gate Gourmet at JFK. "Perhaps it’s a splurge or even a honeymoon. We want them to have the best experience possible, and the food is a key part of that experience," he said.

A first-class meal with five courses can cost an airline upwards of $100, according to industry sources. A business-class meal might cost the airlines between $25 and $30, while an economy-class meal can cost as little as $4.

Each meal is serious business for the airlines and Gate Gourmet with meal costs multiplied by something like 430 economy seats, 70 in business and 10 in first class, based on the average seating capacity on an Airbus A380.

Gate Gourmet's Damon Kessler is the guy charged with serving up the right mix of airline economics and customer experience at the JFK facility. With 19 years of experience, the energetic Miami-born chef attended culinary school at Johnson & Wales University and cut his teeth at restaurants such as An American Place and Jean-Georges.

Damon Kessler, executive chef at Gate Gourmet who is in charge of 14 Gate Gourmet facilities on the East Coast. In his hand is a positively delicious-looking lamb tenderloin.

The vision for improving gourmet dining in the skies began a decade ago when Gate Group, the parent company of Gate Gourmet, formed a unit known as Studio Culinaire, with a mission to "raise the quality standards of in-flight catering and transpose the practices of gastronomy to the meals offered to passengers from all over the world." This meant bringing in renowned chefs such as the late Joel Robuchon, Guy Martin, Massimo Bottura, and Anne-Sophie Pic, the most decorated female chef in France.

"We'll have conversations and workshops with the chefs," Kessler said. "They are very much involved. For example, with Daniel Boulud, I cooked next to him in preparation for a presentation to a client — a meal that I had to then faithfully replicate for presentation to the airline and production," he explained.

"We have chefs working for us around the globe with Michelin stars and Michelin-starred backgrounds," he added. These chefs have opened their own restaurant locally and then transitioned to a job at Gate Gourmet, Kessler said.

The benefit to Gate Gourmet is that it has world-class chefs stirring the pots in their kitchens across the globe. For example, if the company needs to prepare Cantonese cuisine for a client presentation, there will be a chef who can cook it to perfection and supervise the preparation. "They'll be be directly involved in the presentation. For example, let's say they are in London. They'll design a plate, create a list of ingredients and send it to us to confirm we can get the required ingredients locally," Kessler said. “We’ll also bring in the local food suppliers to meet the airlines,” he said, in a nod to the farm-to-table trend.

Airlines will typically delegate the menu preparation to the experts at Gate Gourmet. Regardless of the airline, the process tends to start with common elements. A brand-new menu requires a budget and a brief, as well as indication to Gate Gourmet of any equipment changes on board the aircraft. (Newer aircraft have convection ovens, for example, which do a better job of locking in moisture.)

The brief can be as simple as a few paragraphs, or up to six pages of direction. Gate Gourmet then consults with the airline and its chefs, and typically involves Gate Gourmet kitchens from around the world. For example, the company might have the catering contract for Heathrow-to-North America flights as well as for return flights; coordination will be required.

“Our London kitchen might envision a duck appetizer on the outbound flight from LHR, so we’ll scrap the duck entrée we may have had planned,” Kessler said. The difficult part is to nail down the customer profile. "With food, you're trying to design for 100 palates where everyone has a different perception of food. Making it sufficiently targeted is a challenge" he added.

It takes about two weeks for Gate Gourmet to work up a menu for approval by the airline. Chefs at Gate Gourmet in the US typically work on 150 airline presentations a year.

After airline approval, the menu is entered into a recipe database and turned over to a procurement team to work out the direct material costs and direct labor costs. "Based on that analysis, we'll go back to the airline as needed to confirm the costs and perhaps even modify the dish with a view to maintaining its integrity," Kessler said. "There is some compromise. But airlines know that their menu, meals and service is not a commodity." he said.

The menu database will generate the ingredients needed to supply the menu for a flight, right down to the number of heads of lettuce.

From a celebrity chef's vision to victuals, the on-the-ground preparations take between three to six months before a menu is ready for launch. One airline currently working with Gate Gourmet will have its first taste in early March and the food will be served to passengers for the first time in July.

Two major airlines have staff with offices at the Gate Gourmet facility, where they work on menu development and quality control across the Gate Gourmet network of kitchens in the US. (For competitive reasons, Gate Gourmet won't divulge the names of those airlines.)

“They might request a chef’s table to taste a menu,” Kessler said, adding that a meal that has been prepared and ready for loading on the aircraft will be brought upstairs, heated as if they were at 37,000 feet with reduced humidity, and tasted.

Menus change, with a frequency that varies by airline. For example, one international carrier will rotate its business-class menu monthly, with four different rotations per year -- meaning the January entrees will be tasted by passengers again in April (with seasonal adjustments). For this same airline's economy-class passengers, that rotation will happen every three months. Other carriers rotate monthly.

Notably, the menus stay stable approximately one to two years. This allows the airline to lock in food prices and have price certainty. "This also allows the kitchen to be more consistent with the product. Even yearly changes are a lot," Kessler said.

On a recent visit, Gate Gourmet showed off some of its creations for an international airline currently served on a trans-Atlantic route. (For reasons of client confidentiality, the plates were not emblazoned with the airline's logo.)

First up in the small serving trays were amuse-bouche: a butter-poached shrimp, topped with caviar on a base of green pea puree and poached asparagus. and an eggplant caponata with scallop ceviche and an orange-tangerine vinaigrette.

Various canapes were presented, including a sous-vide beef tenderloin, roasted yellow beets with a blackberry and rosemary glaze.

The main entree was pan-seared tenderloin of American lamb, on a bed of red quinoa and orange lentil pilaf, with artichoke puree and sauteed spinach. It was completed with a demi-glace of Pommery mustard and port wine, and decorated with a quartered artichoke at the request of the airline’s experimental kitchen.

All images by Orli Friedman/TPG.