How Airline Food Is Prepared: Behind the Scenes at Gate Gourmet

Articles
Mike Arnot is the founder of Boarding Pass NYC, a New York-based travel brand and a marketing consultant to airlines. A private pilot, he can sometimes be found above the skies of New York City.
Follow
Feb. 25, 2019
•
10 min read 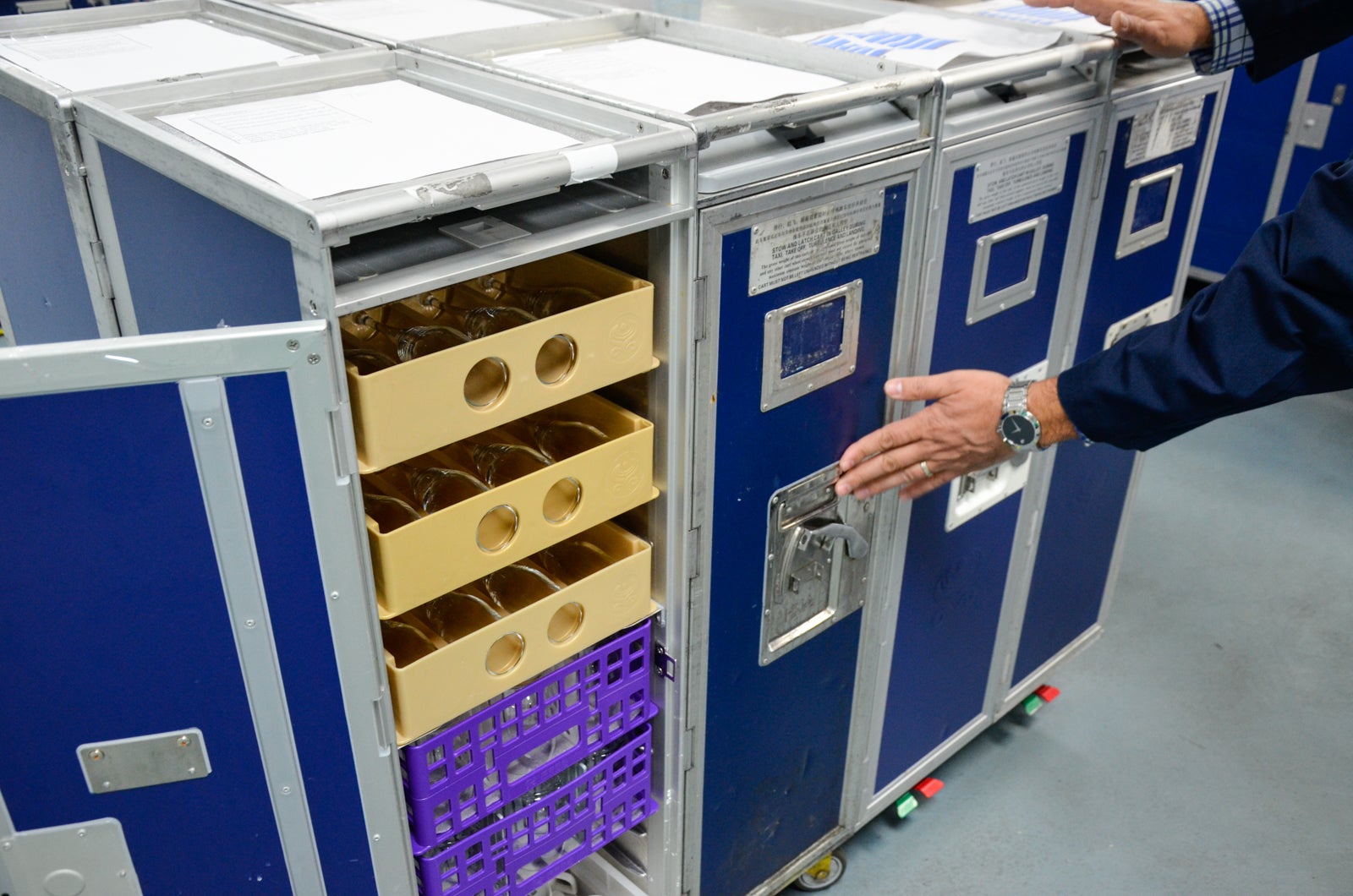 How Airline Food Is Prepared: Behind the Scenes at Gate Gourmet
This post contains references to products from one or more of our advertisers. We may receive compensation when you click on links to those products. Terms apply to the offers listed on this page. For an explanation of our Advertising Policy, visit this page.

The cook grasped the blade just like Anthony Bourdain advised in Kitchen Confidential — not by the handle but on the blade itself.

She sliced zucchini peels into small spears with quiet precision and speed, the way I imagine it's done at a top restaurant. But this was Gate Gourmet, the global purveyor of food to airlines and passengers from economy class to first, where she has been working for 10 years. From her station a stone's throw from JFK airport, within a few hours those spears would be served to first-class passengers on a major international airline.

Here’s what goes on behind the scenes at Gate Gourmet at JFK.

Gate Gourmet invited us to visit the facilities, and we cannot divulge for competitive reasons the exact airlines that Gate Gourmet serves. Suffice to say the Swiss-based company works with the top international airlines out of JFK, the ones you're familiar with from our reviews.

Damon Kessler in his element.

Gate Gourmet has 42 kitchens spread across the US, and Damon Kessler oversees the menus of 14 of them on the east coast. He's the executive chef, with 19 years in the airline food business. The energetic Miami-born chef went to culinary school at Johnson & Wales University and cut his teeth at restaurants such as An American Place and Jean-Georges. As part of his job, he has cooked alongside the who's who in world restaurants that international airlines choose to help guide their on-board menus.

Kessler and Joe Nunes, the general manager of the facility, guided me behind the scenes. Nunes has 30 years in the airline food industry; he started as a driver shuttling food between the catering facilities and the aircraft, graduating to roles in food buying and senior management.

Inside a 90,000-square foot facility at JFK, meals are prepared for some 40 international flights per day, or around 45 during the busier summer season. That may not seem like a lot, but it equates to 13,000 meals per day, and 18,000 in the summer.

At JFK, Gate Gourmet focuses only on international flights, which are its most significant revenue drivers. Domestic flights don't have nearly as extensive a menu, but internationals will have at least one meal for economy, business and first class.

The company maintains a 24/7 operation at the airport with around 300 employees, one-third of whom involved in food preparation. There’s an on-site cafeteria for employees serving complimentary breakfast at 8am, lunch at 11am and two dinner-hour options.

“Whereas in a restaurant there is a mise-en-place and everything is cooked a-la-minute and then immediately served, it’s different with the airlines," Kessler said. "Instead of immediately serving the food, we will put the meals into a blast chiller to be reheated by the crew on the plane.” That means that every plate is cooked, chilled and reheated in ovens. There are no microwaves on board, for safety reasons.

Gate Gourmet will factor in the conditions in the sky and issue instructions to the cabin crew to be followed precisely. And the menus themselves are designed to maximize the moisture and umami elements which shine in the dry, pressurized environment. I got the sense that Gate Gourmet does everything it can to deliver meals in the air just as pleasant as meals on the ground.

For example, the lamb tenderloin pictured above — prior to being plated for first class— has specific guidelines for preparation and even detailed images for the on-board crew to follow. “For the lamb, we will ask that they heat at 320 degrees for 20 minutes,” Kessler said noting that the instructions vary on the type of oven aboard a specific plane. (Newer aircraft have convection ovens, which do a better job of maintaining moisture in a dish.) He said can replicate aircraft conditions on the ground by reducing the humidity of an oven to 60%. In the case of that tenderloin, the chefs on the ground will sear the cut and measure the surface temperature before sending it to be chilled. "With chicken, we like to serve it bone-in which keeps some of the moisture,” he said.

Before Plating by the First Class Crew

The meal is delivered onboard in trays for practicality. The airline crew will replicate the desired look of the Gate Gourmet chefs, going so far as to plate the meal according to spec and pour over the glaze. It’s typically Gate Gourmet that drives the menu and presentation, Kessler said, with the airline itself responsible for the final execution.

From start to finish, it's quite a process to go from raw ingredients to 13,000 meals. Deliveries are made daily with a first-in, first-out system for the ingredients. The raw ingredients are extensive; I saw everything from wild arugula and leaks to pallets of cantaloupes and cans of pimentos.

For fresh vegetables, there’s a washing station where, as expected, everything gets a wash down.

“If you start with poor ingredients, you’ll have a poor dish,” Kessler said -- and the sight of top local ingredients like greens from New York state's Satur Farms, the same as you'll find at TraderJoe’s and Whole Foods in the city. First-class passengers would get the same salad greens I'd ate at home the night before.

Cans of foodstuffs, ranging from beans to canned pimentos, go in a large dry-storage area.

A Word About Ice Cream

A huge freezer, the size of a warehouse, contained all manner of ice cream and frozen desserts such as dulce de leche. The best part? Bowls of colorful Häagen-Dazs ice cream were plated and sat cooling in a cart, ready to go out the door — and in the case of one Asian airline, on the trays of even economy-class passengers.

Not unlike a kitchen at a restaurant, stations were set up for each task related to cooking meat and vegetables. Here, the workday was done, and it was very clean and organized.

A business-class meal of chicken, potatoes and spinach being prepared. The components are precisely weighed for consistency.

On the floor of the kitchen, an experienced executive chef in charge of the JFK facility oversaw the preparation of trays of chicken, mashed potatoes and spinach for a business-class meal.

“During the times we're cooking, I’ll be supervising each stage of the operation, which we call a brigade. That might mean oversight of the glaze or tasting various elements," the chef said.

Almost like a schoolmaster’s desk, there were sample sizes of the each of the day’s meal available for the executive chef to take a quick smell and taste as he was running through. He told me he was looking for consistency — a common theme during my visit at Gate Gourmet.

For example, I watched as a chef prepared crab cakes — 210, to be precise — for the business class of a major carrier. The crab cakes were scooped, individually weighed, dipped in a sauce and then flakes prior to cooking.

“Consistency is key,” general manager Nunes reiterated. “We don’t want one passenger with a six-ounce chicken and another with three ounces. We use the right tools to do exactly that,” he said.

The food is plated in a cooler that is no warmer than 41 degrees, and all of this gets completed by between 1:30pm and 3:30pm each day to meet the afternoon and evening outbound flights. Most departures from the US to Europe, for example, leave at those times.

Airlines will provide their passenger numbers between four and six hours before a flight, typically between 1:30 pm and 4:30 pm. (Kosher and specialty meals must be confirmed within 24 hours of the flight). The airlines communicate these final numbers by fax or email — it’s not automated. It's during that mid-afternoon period that any final meal adjustments will be made. We saw a few straggler breakfasts being prepared.

Moving the food carts to the plane is accomplished with those large trucks you’ll see pull up next to the aircraft. They each have so-called scissor lifts, with one specialized truck for the Airbus A380. Both the truck and the aircraft are extra large and made for each other in this case. Each truck costs around $300,000, but the truck for the A380 around $600,000. (Reminds me of the cost of a deicing truck — everything around airplanes is expensive.)

But one question burned in my mind, just as it does for readers perusing the TPG reviews of airlines known for fine dining.

Which of his airline clients serves the best food to its customers?

Kessler laughed and said simply, “They all do.”