We Tried Out Cathay Pacific's New Yoga and Meditation 'Sanctuary' 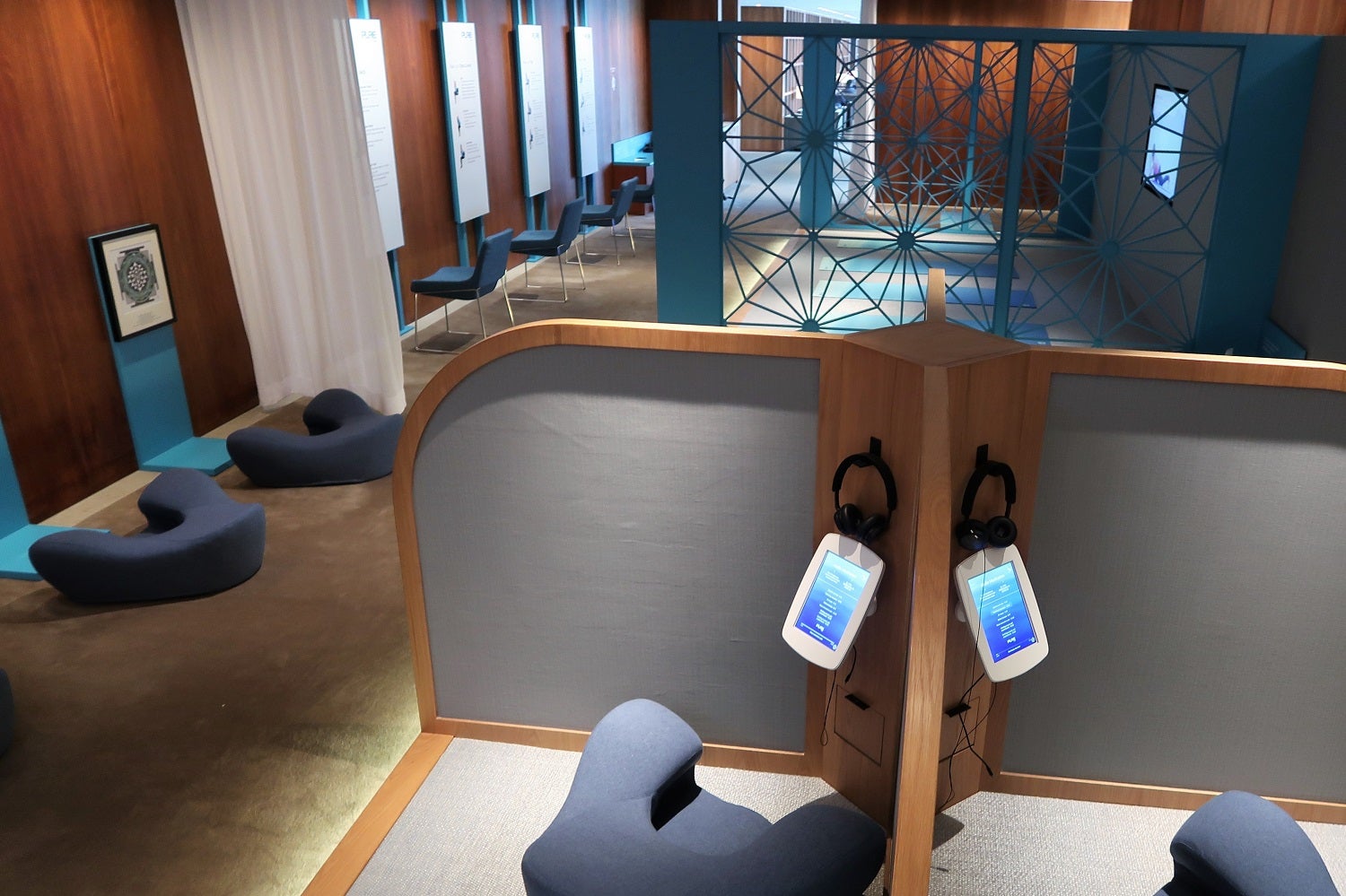 From ever-decreasing seat sizes in economy to ever-longer flights, air travel seems to be getting increasingly grueling on the body. And being sedentary for so long can have serious consequences. As airports and airlines battle to counter the threat, what started off as few one-off yoga spaces in airports seems to now have turned into a full-blown trend.

In conjunction with the launch of its 17-hour flight from Perth to London in March last year, Qantas opened a new lounge complete with a wellness studio with guided stretching classes. Now, fellow Oneworld alliance member Cathay Pacific has opened "The Sanctuary" yoga and meditation space in one of its Hong Kong lounges.

Katie and I just so happened to be flying through Hong Kong a few days after this space opened — we were passing through on the Cathay Pacific first class mistake fares. So, I checked out the new space for myself. Here's what it's like, with some tips for your visit.

"The Sanctuary" is located in Cathay Pacific's The Pier business class lounge near gate 65 in Hong Kong International Airport (HKG).

To get into The Pier, you'll need to be flying:

"The Sanctuary" is in the back right corner of the business class lounge. From the lounge entrance, continue toward the windows and then turn right into the open area. The signage needs to be clearer, but be aware you'll need to take off your shoes before entering the space. Inside, there are five different stations providing a range of stretching, meditation and yoga experiences, as explained on a small placard at the entrance.

The first area that you'll see when walking in is the Private Yoga space. This area is provisioned with just one yoga mat and has a mesh curtain.

The next space is the Gentle Yoga area. This open area has five yoga mats situated in front of a TV screen with a rotating set of yoga instructional videos.

In the back right area of the space, there are four open Audio Meditation stations. Each of these areas has a pair of Bluetooth headphones, a very-comfortable Alexia Meditation Seat and a touchscreen tablet allowing guests to select from a range of audio selections, including spoken and musical meditation options. The lounge employed excellent Bang & Olufsen headphones. Understandably, these were secured to the wall to avoid passengers walking off with such an expensive item.

There are also three stations for Gazing Meditation. While this isn't something I've ever tried before, I found the simple instructions below the image to be all that was needed. And it was quite a trippy experience.

On the left as you enter the space, there's an open area of four Seated Stretching stations. Each station has three clearly-defined exercises to follow to stretch your body before your flight.

Cathay Pacific's Sanctuary is off to a great start, and I'm really glad that the airline has added this space. But, there's still some kinks to work out.

The first thing that struck me is how exposed it feels to the rest of the lounge. While we were in there, plenty of other travelers wandered in and out, with their shoes still on and dragging luggage, taking photos of people stretching and practicing yoga. The installation of a heavy curtain separating the space from the rest of the lounge would help stem the flow of traffic and provide a bit more seclusion.

While there's a shelf for visitors to place their shoes, there's no place to store baggage. Signs indicate that luggage storage is available at the entrance to the lounge. However, it'd be nice for the lounge to install some lockers at the entrance to The Sanctuary for passengers to be able to securely leave their carry-on bags or personal electronics while they use the space.

One of the Bluetooth headphones in the the Audio Meditation area was out of batteries leading to the meditation track being played out loud, disturbing the area around it. While there's no signage saying this, it seems that users need to plug in the headphones between uses to charge them. To solve this, it'd be good if the lounge added some simple signage indicating that the headphones are Bluetooth and shoould be plugged in after use.

The "Private Yoga" area isn't very private. Instead of having a slotted wall, it would add quite a bit more privacy if a curtain or translucent wall was swapped in between the shared and private yoga areas, for the self-conscious or privacy-minded.

While we were visiting the space, parts of three different yoga instructional videos cycled through the automated video player. And there was a huge variance in both how loud and how difficult the videos were. The first video was plenty loud enough. However, the second and third videos were far too quiet for those practicing yoga to follow along without having to look up to see the next pose.

The second video played for seemingly about 30 minutes and was far too advanced to be shown in this type of space. I feel that Cathay Pacific should work with the content provider to swap out this video and keep to beginner and intermediate (at the most) videos. Or, at the very least, allow visitors to chose the video shown through either a touchscreen or button system.

We weren't alone in thinking this. We ran into Deb S., a fellow American Airlines Executive Platinum elite and traveler on the Da Nang Cathay Pacific deal, and visited the space together. She's been practicing yoga for 15 years and found this video far too advanced. She agreed that it'd be nice to choose a video "instead of watching the loop of hard ones." Another improvement she suggested: making loose yoga clothing available for travelers, perhaps at a nominal cost.

With all of that said, I'm really happy with the addition of The Sanctuary. I felt wonderful after visiting the various stations in the area. And I think it's great that Cathay Pacific is providing a space like this for stretching, relaxing and meditation.

Too often, the only options travelers have when spending layovers in a lounge is to sit around or eat and drink. The Sanctuary gives travelers of all abilities a place to at least do a bit of stretching and meditation to pass the time in a much healthier way.

Related stories
This might be the best Amex card combo: Amex Gold and Amex Business Platinum
What it's like to take a once-in-a-lifetime trip to Finland’s Arctic to see Santa
8 mistakes to avoid when redeeming hotel points
Why you shouldn't open a store credit card during the holiday season

Our points-obsessed staff uses a plethora of credit cards on a daily basis. If anyone on our team wouldn’t recommend it to a friend or a family member, we wouldn’t recommend it on The Points Guy either. Our opinions are our own, and have not been reviewed, approved, or endorsed by our advertising partners.
See all best card offers
Related stories
Guide
This might be the best Amex card combo: Amex Gold and Amex Business Platinum
News
What it's like to take a once-in-a-lifetime trip to Finland’s Arctic to see Santa
Guide
8 mistakes to avoid when redeeming hotel points
News
Why you shouldn't open a store credit card during the holiday season