Articles
Sean Cudahy is a reporter covering general assignment news on travel, aviation and points and miles. He joined the TPG team in 2022 after nearly eight years as a local television news reporter.
Follow
May 28, 2022
•
6 min read 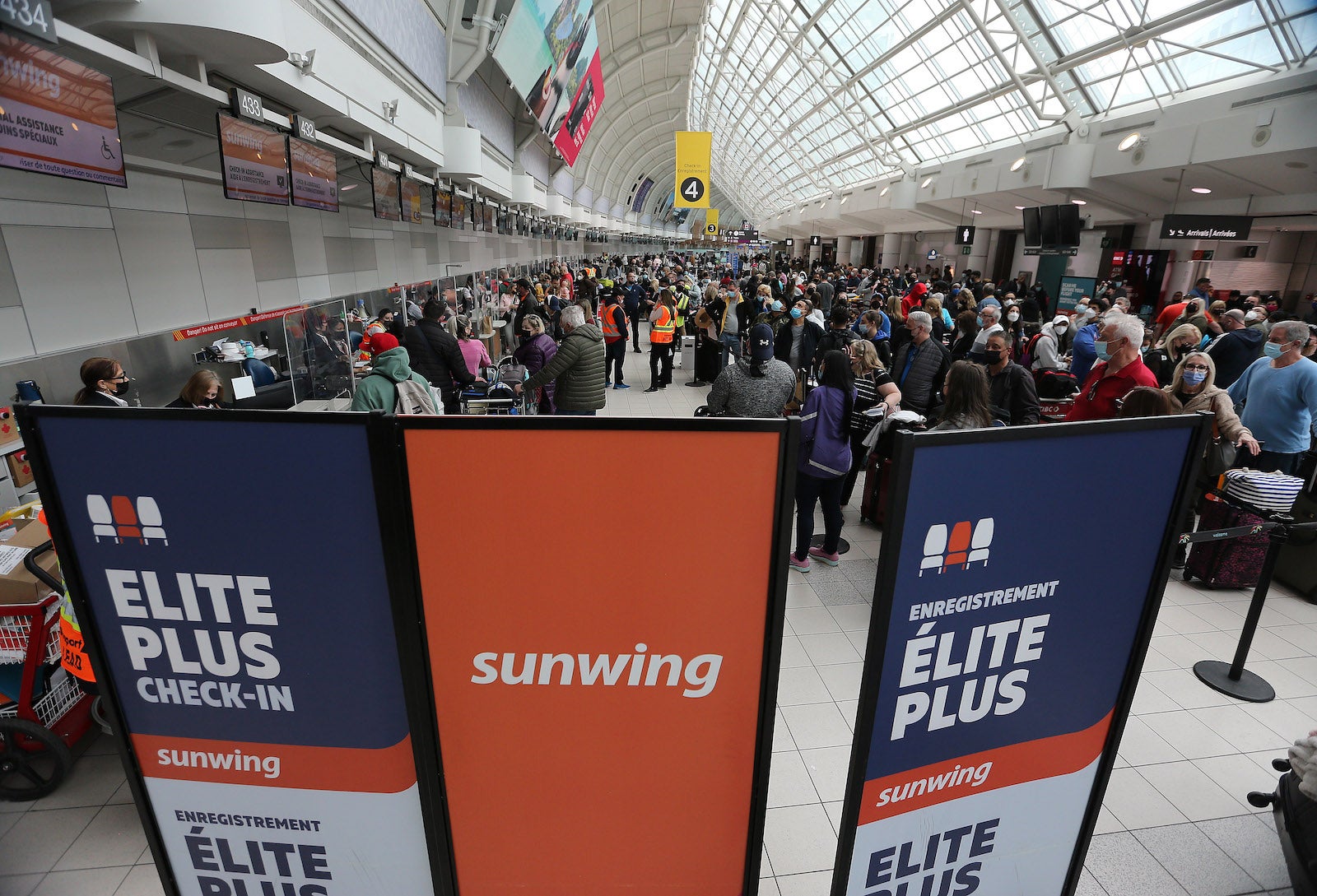 Canadian leaders are promising “clear and decisive action,” weeks after officials at the country’s largest airport sounded the alarm over “extreme” wait times faced by passengers. Transport Canada, the country’s federal transportation agency, outlined a list of steps Friday – some underway and others in the works – aimed at cutting down on long waits faced by travelers at security and customs.

In early May, officials at Toronto Pearson International Airport (YYZ) released a statement calling for the Canadian government to make changes after bottlenecks in several places led to long waits in several places at the airport.

The problems, airport officials said in early May, stemmed from a combination of staffing shortages and other slowdowns at security checkpoints, Canadian customs checkpoints, as well as U.S. preclearance facilities.

TPG reported how the problems led to passengers being held on planes for hours after landing from international destinations, as airport officials tried to temper the number of passengers entering the customs hall.

At the time, the airport called on federal officials to make changes to, among other things, streamline health protocols in hopes of speeding up processing for those entering the country. However, days after raising concerns about the problems, Pearson officials told me they had yet to hear back from the federal government on any sort of plan to deal with the slowdowns.

That appears to have changed, now, as Canada’s Minister for Public Safety announced Friday steps aimed at cutting down on these wait times.

Some changes have already led to modest improvements, leaders said, while pledging to do more.

Related: Avoiding long lines at the airports and during your travels

Following the concerns over very long wait times in early May, Transport Canada convened a committee of agencies to evaluate potential changes, leaders said in a statement Friday.

The Canadian government is now working with transit officials to speed up training for some 400 security officers expected to come on board this summer, and in the meantime, they are using partially trained officers to assist at airports.

Transportation officials have said that the number of passengers waiting 30 minutes or more at security checkpoints across Canada’s largest airports in Toronto, Vancouver, Montreal and Calgary has been cut in half since the start of May.

“While more remains to be done, these efforts are paying off through declining wait times for security,” according to Omar Alghabra, minister for transport.

While Canada does not require testing for vaccinated travelers entering the country, the Canadian government has continued to do random testing, which Pearson Airport officials noted is contributing to the slowdown entering Canada. Health officials have seen this as a way to continue monitoring the COVID-19 situation.

As part of Friday’s changes, the government announced, that health officials would no longer conduct random testing for passengers arriving from an international flight but connecting to a Canadian domestic destination. This should lighten the load when it comes to testing; for instance, a traveler arriving in Toronto from overseas would not be subject to random testing in Toronto before connecting to a flight to a smaller Canadian city.

More changes to streamline border processing at airports when it comes to health protocols are “being developed,” leaders said Friday.

How travelers can help speed things up

Even those who are vaccinated are required to enter personal information and COVID-19 vaccination history into the ArriveCAN app.

Leaders pointed out that completing this information ahead of travel – either on a computer or smartphone – is the “simplest thing travelers can do to speed up their airport experience.”

On top of entering COVID-19-related information, the ArriveCAN app allows travelers to take care of their customs and immigration declaration starting 72 hours ahead of travel – so, doing this before a flight could be a good way to smooth your experience at the airport.

Canadian officials said travelers who arrive in the country without having filled out their information in the ArriveCAN app “contribute significantly to border congestion.”

Canada is not the only country facing long delays as travel surges. From airlines and airports in the U.S. to the U.K. and Amsterdam, TPG has covered operational issues this spring brought on by a combination of staffing shortages and travel demand returning closer to pre-pandemic levels.

In Canada, leaders said addressing these wait times – particularly in Toronto – is a “matter of priority.”

“The Government of Canada recognizes the urgency of this situation,” Alghabra said Friday, noting “we need to do more – and we will.”

It appears things are slowly starting to improve when it comes to the wait times at Canadian airports, most notably its largest, Toronto Pearson.

Leaders have outlined plans aimed at cutting down on the delays, both for pre-flight security and for passengers arriving from international destinations.

At the same time, as we’ve seen in many places around the world, these problems do not have overnight fixes.

The best advice at this point if you’re traveling in and out of Canada would be to get to the airport early for departures. If you’re traveling into Canada from an international destination, be sure you’ve got everything filled out on the ArriveCAN app, and just have in the back of your mind, the possibility you could still end up waiting on the plane for a while after landing.