Boeing CEO: We Know We Have to Re-Earn Trust on 737 MAX

Articles
Ben Mutzabaugh is the senior aviation editor and heads TPG’s airline coverage. Ben joined TPG in March 2019 after nearly 19 years at USA Today, where he launched the long-running, industry-leading Today in the Sky blog in 2002.
Follow
April 24, 2019
•
5 min read 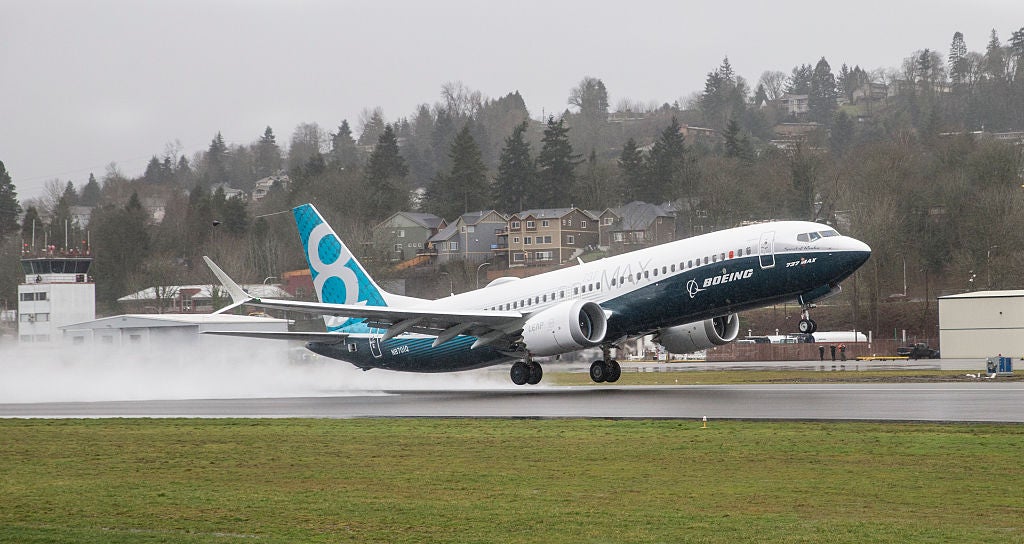 Boeing CEO: We Know We Have to Re-Earn Trust on 737 MAX
This post contains references to products from one or more of our advertisers. We may receive compensation when you click on links to those products. Terms apply to the offers listed on this page. For an explanation of our Advertising Policy, visit this page.

Boeing executives said returning the company’s troubled 737 MAX to the sky is a “top priority” and pledged to commit all the resources needed to make that happen.

The jet was grounded by regulators around the world in March following the second of two deadly crashes that raised safety concerns about the MAX and shook travelers’ confidence in the aircraft.

“We know we have some work to do to earn and re-earn the trust of our airline customers and the flying public, in particular,” Boeing CEO Dennis Muilenburg said during the company’s earnings call.

The comments, which came during the company’s quarterly earnings call on Wednesday, are Boeing’s most significant yet since the MAX fleet was grounded worldwide. That grounding came shortly after the crash of an Ethiopian 737 Max 8 in March. It was the second Max 8 crash in just five months, coming on the heels of a Lion Air Max 8 crash in October 2018. The crashes killed all 346 passengers and crew on the two flights. (Related: Boeing’s First Earnings Report After 737 MAX Grounding Says Little About Its Return)

Crash investigations have put a spotlight on the MAX’s new automated “Maneuvering Characteristics Augmentation System” (MCAS). Re-certification of the MAX by the Federal Aviation Administration and other global aviation regulators will likely hinge on software updates for the MCAS system.

“Ever since the Lion Air accident, our top technical experts, engineers and test pilots have been working with regulators from all over the world on a software update that will make the 737 MAX the safest airplane ever to fly,” Muilenburg pledged during the earnings call, detailing the company’s progress to date.

“Our test pilots have now completed over 135 flights, totaling more than 230 hours of air time with the software update,” he added. “We are taking a disciplined approach. We completed our technical flight testing last week and look forward to completing near-term milestones leading to final certification.”

But Boeing was unable to give any concrete guidance as to when that certification might be achieved, citing “uncertainty” about the subsequent regulatory approvals that will be needed for the jet to begin flying again.

“The timing for the return to service for the Max will continue to be paced by ongoing work with global regulators and our customers,” Muilenburg said.

For now, Muilenburg expressed “regret” for the inconvenience that the grounding has had on its airline customers and on passengers.

“All of us at Boeing have been deeply affected by the accidents in Indonesia and Ethiopia, beyond anything I can recall in my 34 years at this great company,” he said at the start of the call.

In the United States alone, the grounding of the MAX has resulted in hundreds of cancellations among the three carriers that fly the jet here. Southwest has 34 737 MAX 8s in its fleet while American has 24. United has 14 of the larger MAX 9s in its fleet. Each of the airlines has pulled the aircraft out of its schedules through late summer.

At American and Southwest in particular, the grounding of the MAX forced the carriers to juggle their schedules for travel during the busy summer travel season.

“I … want to thank our Boeing (airline) customers and their passengers for enduring the disruption caused by this issue. We deeply regret the impact this has created,” Muilenburg said during the call.

He acknowledged Boeing will face challenges winning over a travel public that may now feel skittish about the MAX’s safety.

Asked specifically about possibility of travelers who might not want to fly on the MAX, Muilenburg said: “It’s certainly an area we’re very focused on. This is an area where collaboration with our airline customers is extremely important. The confidence of the flying public is very, very important to us.”

Muilenburg said Boeing has been working with its 737 MAX airline customers, “talking with each of them in terms of what they’re hearing from their passengers.”

One key part of the plan is to win the confidence of pilots, a move that could in turn ease flyers’ unease about the MAX.

“That bond between the passenger and the pilot is one that’s critical,” Muilenburg said.

During the grounding, Muilenburg said pilots from 90% of all carriers that operate 737 MAXes have been brought in for training sessions in flight simulators with the new software.

“The pilot feedback from those sessions has been excellent. It’s been a big part of building confidence and how we talk about this going forward. We plan to leverage that pilot voice,” he said.

Still, Muilenburg conceded winning back the public’s confidence may not be easy.

“We know it will be important to earn – and re-earn – that trust,” Muilenburg reiterated during the call. “This will be done jointly with our customers, the pilots, the flight crews, the flight attendants -- everybody that supports these airplanes.”

“It will take time.”