We got a first look inside Boeing's prototype 737 MAX 10

Articles
David Slotnick is a senior aviation business reporter at TPG. He covers anything and everything to do with the business of running an airline.
Follow
July 23, 2022
•
9 min read 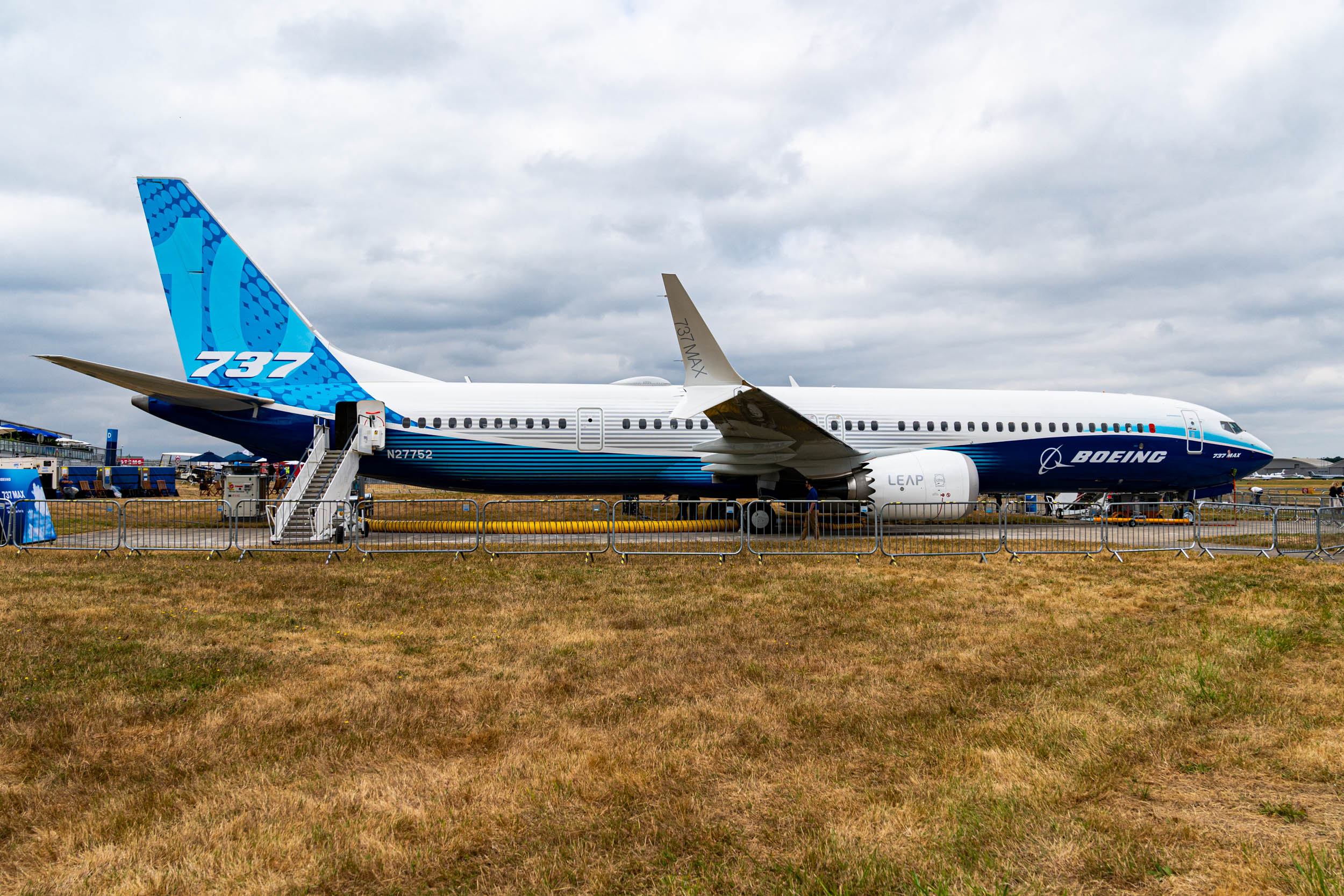 We got a first look inside Boeing's prototype 737 MAX 10
This post contains references to products from one or more of our advertisers. We may receive compensation when you click on links to those products. Terms apply to the offers listed on this page. For an explanation of our Advertising Policy, visit this page.

After nearly two years on the ground, the Boeing 737 MAX has maintained a solid track record since it was cleared to fly again in late 2020. There have been more than 1,000 orders for these planes since then. As of the end of May, there were more than 630 MAX aircraft in service across about 45 airlines which had flown for more than 1.5 million combined hours, according to Boeing.

However, two of the four MAX models have never flown a commercial flight, and they haven't been certified by the FAA yet.

One of these variants, the 737 MAX 7, would be the smallest of the MAX jets — it seats just 138 to 153 people in a two-cabin setup. In comparison, the next model up is the MAX 8, which can seat 162 to 178 in the same configuration. However, the 737 MAX 7 jet makes up for its smaller size with a range boost of 300 nautical miles over the larger variants, according to Boeing.

The other coming variant, the 737 MAX 10, is the largest in the group. While this has a slightly shorter range — 250 nautical miles less than the MAX 8 and MAX 9, according to Boeing — it can seat about 10 more passengers than the MAX 9, with a two-cabin capacity of about 188 to 204. This makes it an attractive option for airlines with high-demand routes, since the extra seats will effectively lower unit costs (similar to how the previous-generation 737-900ER was an appealing option for airline network planners).

Boeing previously said it expected to certify the plane by year’s end, and that timeline has taken on a renewed sense of urgency.

A 2020 law that goes into effect at the end of this year requires all newly certified plane types to have a new kind of cockpit alerting system known as an engine-indicating and crew-alerting system. Adding that system to the MAX 7 and MAX 10 models would be costly for Boeing, and it would negate the variants’ commonality with previous 737 MAX and NG models — a major selling point for the plane. In essence, it would be considered a different plane type rather than a variant. Some observers have argued that introducing this system into some 737 models but not others would add a degree of complexity that is antithetical to most safety best practices.

If the plane is not certified by year’s end, Boeing will need Congress to waive the requirement in order to be able to sell the variants without the new system. A new Delta order could put pressure on Congress to issue the waiver or grant an extension. The MAX 7 is further along in the certification process than the MAX 10.

That timeline appeared to have slipped into 2023, industry publication The Air Current reported late Monday. A 2023 certification would mean that Boeing would need to ask Congress to waive the EICAS requirement for the model, which appears likely.

At the Farnborough Airshow this week outside of London, Boeing brought one of the 737 MAX 10 testbeds that it's using as part of the certification process and TPG had the chance to climb on board for a tour.

If you're a regular reader, you may remember learning about a similar testbed at the Dubai Airshow in November, Boeing's 777-9.

The 737 MAX 10 at Farnborough is set up similarly.

Even the most casual of planespotters should have no trouble figuring out which model this is, between the "737 MAX" branding under the cockpit and on the wingtips, and the oversized 10 on the vertical stabilizer on the tail. Plus, it's painted in a familiar Boeing in-house livery.

While the plane certainly looks large, it actually doesn't seem gigantic compared to a 737 MAX 9 that you might see at any given major airport. Despite the extra capacity, it isn't really that much bigger — just 5 feet and 4 inches longer.

Like the other MAX variants, the MAX 10 is powered by LEAP-1B engines built by CFM International — a joint venture between GE Aviation and French aerospace company Safran.

As you walk about the jet, you'll see the word "experimental" written in big letters at every door and on the outside of the boarding door. This is to remind you that this is not a commercial airliner, and it's not fully up to spec just yet.

There's an eclectic collection of mismatched seats on board. Jeff Harber, model leader for product marketing at Boeing Commercial Airplanes, told me those seats are for the test pilots, engineers, and other support personnel who flew the plane over to Farnborough from Seattle. For trips like this, Boeing simply uses whatever spare seats it has lying around (as long as they're in suitable condition, of course).

Even though it isn't an in-service commercial jet yet, Boeing must carry certain emergency equipment for the employees on board. There are oxygen tanks, a defibrillator, and a fire suppression blanket that were sitting in plain sight, and each seat had a life vest in case of an emergency water landing.

There were 27 Boeing employees aboard the MAX 10 on the trip to Farnborough while other support personnel flew commercial, test director Mike Johnson said. The jet didn't have quite enough range to make it all the way to the U.K., so it stopped to refuel at Keflavik Airport (KEF) in Iceland.

In the space that's not taken up by passenger seats, there are all kinds of different testing equipment. A central plumbing system connects several water tanks, and a pump lets test engineers move that water around from tank to tank to redistribute weight for balance testing.

Test racks full of computers and sensors help collect data during every phase of a test flight, from take-offs and landings to turns and other maneuvers.

Work stations dotted throughout the plane let engineers get readings and adjust test parameters in real-time as the plane inches closer to achieving certification.

Each of the test seats has a more substantial harness than the seatbelt that commercial passengers wear because some of the test maneuvers can be a bit extreme, with the planemaker proving exactly what the plane can handle. There life vests are strapped to the back of each seat.

The cockpit, however, is just like any other 737 MAX cockpit, and it's virtually the same as what a pilot would find in the previous generation of the 737, which includes the 737-700, -800 and -900. Pilots certified to fly the previous generation — incidentally known as the 737NG, or "Next Generation" — can do a simple, classroom-based training to qualify on the MAX.

That's also why Boeing is eager to earn exemption from the EICAS requirement on this model. Otherwise, the MAX 10 would be considered an entirely new airplane from the pilots' perspective rather than just a slightly longer variant.

Boeing appears to be confident that the exemption it will likely have to seek will be granted by Congress. Plus, since three U.S. airlines are waiting on the new variants — United and Delta have ordered the MAX 10, while Southwest Airlines is awaiting the MAX 7 — there's more pressure on Congress and the FAA to find a solution.

Related: Here’s what you missed from the biggest airline gathering of the year

By the time the plane is certified and reaches airlines, the "experimental" tag will be gone and the inside will look like any other airplane.