Battle of the British bars: An upscale hotel bar versus a casual corner pub

Articles
Scott Mayerowitz is the executive editor of TPG and oversees all of TPG's editorial coverage. He previously was a reporter, then editor, at The Associated Press and reported for ABC News.
Follow
Dec. 24, 2021
•
6 min read 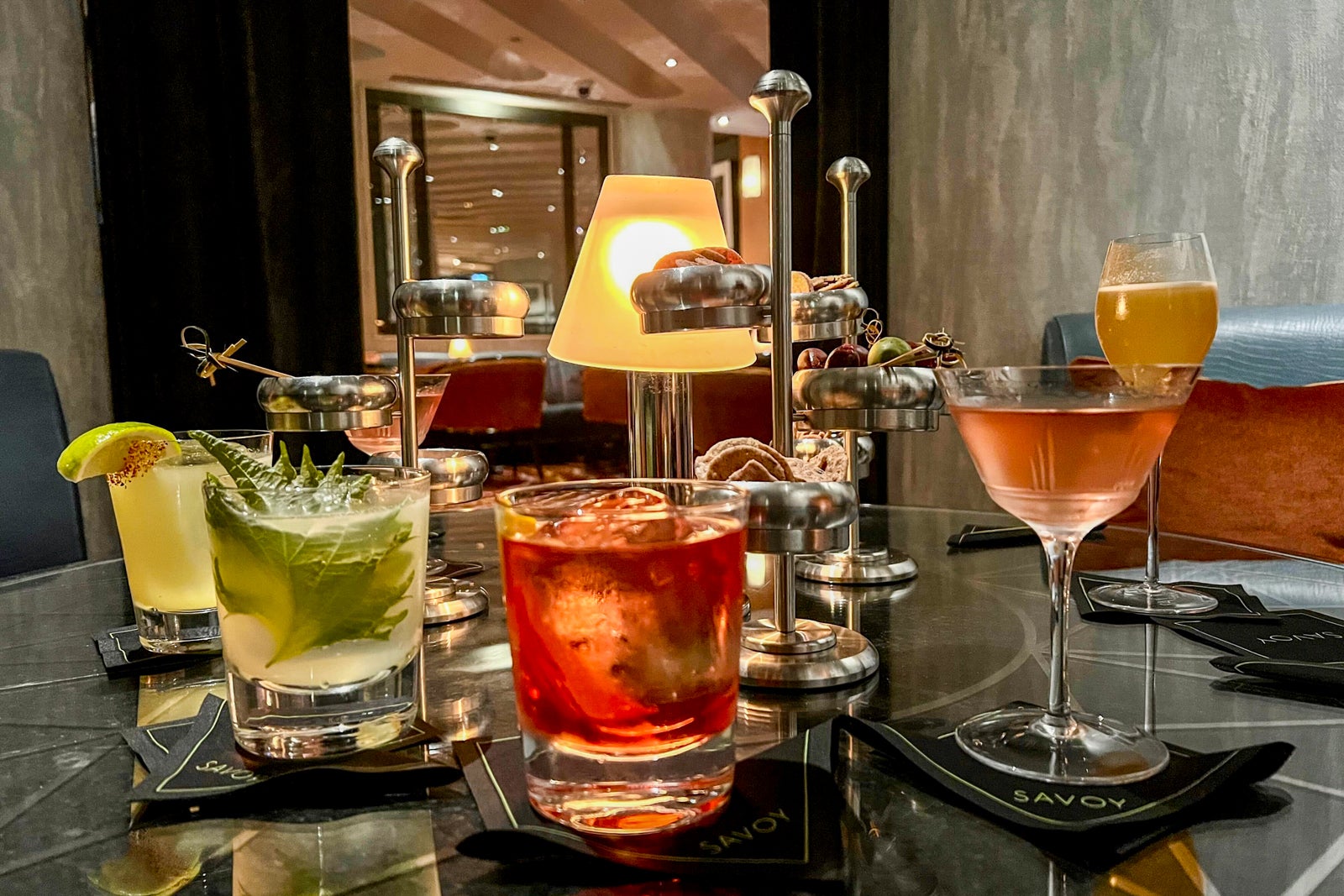 There’s something magical about ordering the perfect cocktail, especially in the perfect setting.

Dim lights. A plush banquette. The faint but omnipresent melody from the pianist a few seats over.

And to top it all off, a tower of bar snacks (assorted olives, addictive crisps and more) straddling the line between art and delicacy.

That’s exactly what two Americans found during a recent trip to London at the famed American Bar at The Savoy – a singularly British experience with an American name. Yet just a few blocks away, we discovered a completely different (but equally British) experience: pounding back a few cheap pints at the corner pub.

Nothing reminds us why we love to travel more than becoming immersed in a setting so comfortable — yet so out of your everyday routine — that you feel as if you’ve become part of the very fabric of the space and a fixture of the neighborhood. There are few better places to get your finger on the pulse of a city than in its bars, whether you elbow up to a bar in a swanky hotel lobby or grab a seat in a boisterous pub.

Of course, there’s no fair way to compare the refined atmosphere of one of the most historic hotel bars in the world with a chain of everyday watering holes, but that’s exactly what we plan to do.

Few places offer as good of an education on cocktails as the American Bar at The Savoy.

First opened in 1893, back when Queen Victoria was still on the throne, this bar wrote the book on a proper cocktail ... literally. In 1930, then head bartender Harry Craddock published “The Savoy Cocktail Book,” which is still in publication today and is considered by many to be the bible of mixology.

But that doesn’t mean that the American Bar rests on its laurels.

In fact, the bar reopened in August with a new head bartender, Shannon Tebay. She’s the first woman to run the bar in more than 100 years and the first American at the helm, despite the bar’s name.Prior to moving to London, Tebay was the head bartender at New York City’s Death & Company, which is known for pushing Manhattan's cocktail scene to a new level.

Tebay, who is adding a new twist to the “longest-surviving cocktail bar in London,” swung by our table to personally check in on our night out and the cocktails.

We recommend The Suffragette, composed of Suntory Roku gin, Choya Umeshu, Lillet Rose, Peychaud's bitters and absinthe, for 22 pounds ($29) and the Moonraker, which is made with Powers Gold Label Irish whiskey, Grand Marnier, chamomile, lemon and Laurent-Perrier La Cuvée Champagne, for 25 pounds ($33).

With delicate glassware and flashes of chrome, The Savoy's bar is every bit as elegant as you would expect. It's the kind of place you may go to impress a date or client. But for casual nights with friends and old colleagues, there’s an entirely different side to London’s bar scene.

Not everybody wants a drink with Peychaud's bitters or Choya Umeshu. Let’s face it, we like to pretend we're sophisticated enough to know what those things are, but we really just fake it like everybody else in the bar.

For the same price as The Suffragette, you could instead purchase seven pints of beer at the nearby Shakespeare's Head, a no-frills spot that's part of a chain of British pubs owned by a company called Wetherspoons (colloquially known as "Spoons").

It’s a mass-market destination for low-price food and drink, where you can be loud and slam your glass down on the table without shattering a slender stem into pieces.

After all, an entire bottle of sparkling wine here costs 15 pounds ($20).

At the Shakespeare's Head, you’ll find a rowdy, shoulder-bumping atmosphere of folks unwinding after a hard day’s work. All are welcome, including those in suits and those in T-shirts. Glossy menus and large placards announcing “top brands; sensible prices” are available here.

There’s no missing the specials, which range from hard seltzer to pizzas, burgers and a classic plate of fish and chips.

Prices here give everybody a few coins to spare, which you can put toward a few rounds at the slot machines by the front entrance, if you want to test Lady Luck.

On our journey through London’s bars, the two Americans agreed that people seemed to be having unabashed fun at Spoons.

That’s not to say the crowd at the American Bar wasn’t having a good time, but the enjoyment was more internalized. It’s a place you go to appreciate the art of an expertly crafted cocktail, not to toss back round after round while letting off steam after work.

But both are, undoubtedly, examples of England’s deserved distinction as a destination made for having a good time.

You don’t need to spend 25 pounds on a single cocktail or push your way to the bar at a cheap mass-market establishment to experience the distinct joy of a perfect British evening out.

Instead, you can find an iconic London bar experience while playing a round of Trivial Pursuit at a corner pub with strangers or petting a friendly resident dog pacing between the rows of guests looking for scraps. These examples, as confirmed by our British colleagues, also qualify as exemplary British bar experiences, as they offer something cozy and familiar.

For some travelers, however, there’s nothing that epitomizes a welcome to a new city quite like a well-crafted cocktail at a legendary hotel bar.

It all depends on how you want to announce: I’ve arrived.

Featured image by (Photo by Nicky Kelvin/The Points Guy)
Editorial disclaimer: Opinions expressed here are the author’s alone, not those of any bank, credit card issuer, airline or hotel chain, and have not been reviewed, approved or otherwise endorsed by any of these entities.