As protests escalate, is it safe to travel to Barcelona?

Articles
Lori Zaino is a writer for TPG and TPG UK covering travel, news, points and miles and more. She's been based in Madrid, Spain almost 15 years and is an expert in travel throughout destinations such as Europe, Southeast Asia and Africa.
Follow
Oct. 16, 2019
•
8 min read 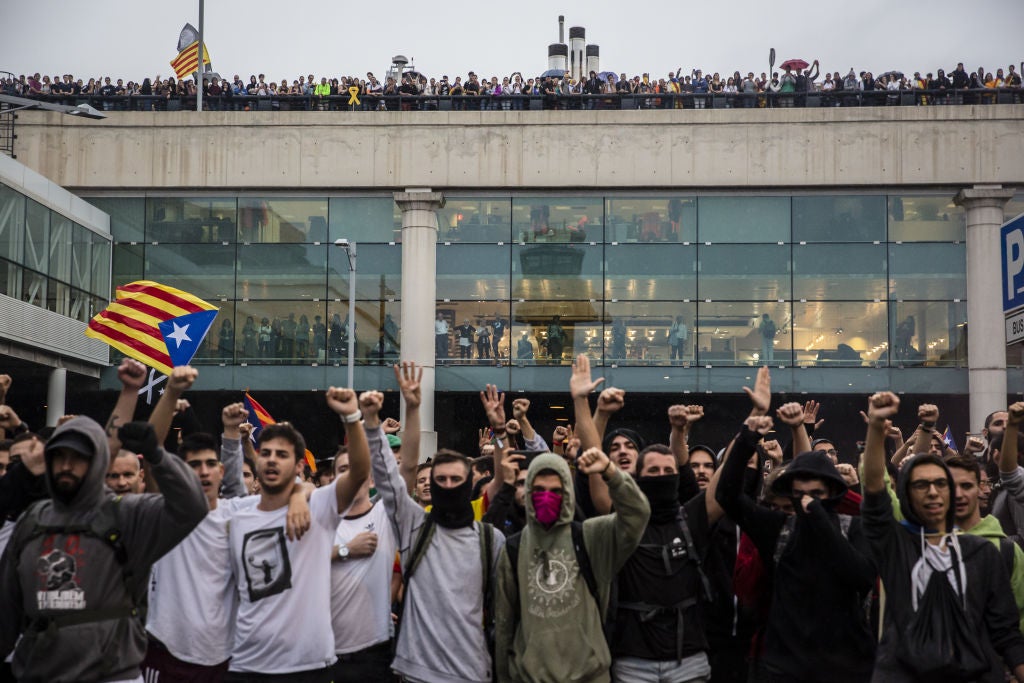 Barcelona is experiencing civil unrest in response to lengthy prison sentences handed to Catalan politicians for their participation in the Catalonian separatist movement. After a guilty verdict was released Monday morning, protesters took the streets, blocking the airport and the streets leading up to it.

Although many of the protests around the city have been peaceful, some have used barricades and fire to incite more serious disturbances, resulting in altercations with the Mossos (Catalan police). La Vanguardia reports that 74 people have been injured and 25 detained. Protests and riots have also spread to nearby cities such as Girona, Tarragona and Lleida.

Through a movement called Tsunami Democràtic, protesters managed to block the route to Barcelona–El Prat Josep Tarradellas Airport (BCN) airport and cause flight cancellations: 108 flights were canceled on Monday, Oct. 14 (including American Airlines flights from Barcelona to New York, Miami, Chicago and Philadelphia) and 45 on Tuesday, Oct. 15 due to the disturbances. Several RENFE trains were also canceled, and many highways and streets were blocked.

The same group of protesters called for a similar movement to take place at Adolfo Suárez Madrid–Barajas Airport (MAD) but it didn't gain momentum, and no flights were displaced there.

While it seems the El Prat airport is functioning normally at the moment, a Spanish Air Traffic Controller told The Points Guy, "The situation is very unstable. No one knows what will happen. Right now, flights are arriving and departing as planned, but make sure to check with your airline or via AENA (Aeropuertos Españoles y Navegación Aérea) to see if any cancellations or closures occur."

Currently, most of the RENFE train system is operating normally, though there are some delays with AVE trains running between Madrid and Barcelona as well as some delays and closures among regional trains operating within Catalonia.

For those flying out of Barcelona

If you're flying out of Barcelona (BCN) today or this week, make sure to leave plenty of time to get to the airport in case of road closures or other incidents. If your flight was or is canceled, there is a number provided that tourists can call for assistance: +34932853834.

These are the airlines offering travel waivers

If you're traveling to / through / from:

Your change fee may be waived if you:

If your trip is eligible, you can change it online. Here's how:

If you hold a ticket flying through Barcelona (BCN) or Madrid (MAD) for travel dates Oct. 15, 2019 — Oct. 17, 2019, the change fee and any difference in fare will be waived for new United flights departing on or before Oct. 20, 2019, as long as travel is rescheduled in the originally ticketed cabin (any fare class) and between the same cities as originally ticketed. View your reservation and select Change Flight to search for alternate flights.​​ Original ticket must have been purchased by Oct. 13, 2019.

Due to the general strike that is to be held in Catalonia called by Intersindical-CSC Unions and the IAC for Oct. 18, 2019 customers with an Iberia operated 075 ticketed issued by 16th October to or from Barcelona who wish to move their departure away from the day of the strike, may rebook to an alternative date up to 23rd October. If you've booked a flight that may be affected, enter your contact details Booking management so that the airline can notify you of any important changes to your trip. To change your ticket, call 1-800-772-4642 24 hours a day.

You can only rebook KLM flights without a change fee if your original travel date was Oct. 14- or Oct. 15, 2019. To rebook, log in to My Trip and change your travel dates and/or destination or contact KLM for more assistance.

You can only rebook Delta flights without a change fee if your original travel date was Oct. 14 or Oct. 15, 2019. To change your flight, visit My Trips on delta.com and click on "Modify Flight."

If you plan to travel to Barcelona in the immediate future, avoid the main protest areas and continue to monitor the situation for any possible flight cancellations or delays. If your hotel is on a main street like Via Laietana or Passeig de Gracia, you may want to consider booking a second, cancelable backup in case the protests continue.

On Wednesday, October 16, there is a protest scheduled for 7 p.m. along Gran Via and Carrer Marina, so steer clear of this area and consider booking alternative accommodation if necessary.

Some highways, especially those en route to other Catalonia regions such as Girona, Tarragona or the Costa Brava, may be closed due to protests, so plan to stay away from any road trips to those areas. Once you land at the airport, you may want to consider taking the metro to avoid any possible traffic disturbances (just make sure you stop isn't closed before you get on). At the moment, the airport bus is operating normally, stopping at all the programmed places.

Airport updates can found on Twitter via AENA and via Airport BCN, traffic and street closures via Guardia Urbana Barcelona, RENFE trains via Renfe, any protests the CDR is planning via CDR Barcelones and airport bus via AeroBus BCN. You can also see which metro stations are closed on the TMB transport network.

Related stories
Chasing elite status on Alaska Airlines? A flight to California this fall could help
Flights to Auckland starting under $700 round-trip
The ultimate guide to earning elite status with United cards
American Airlines forgot it had landing slots at JFK. Then it lost some of them
Featured image by Bloomberg via Getty Images