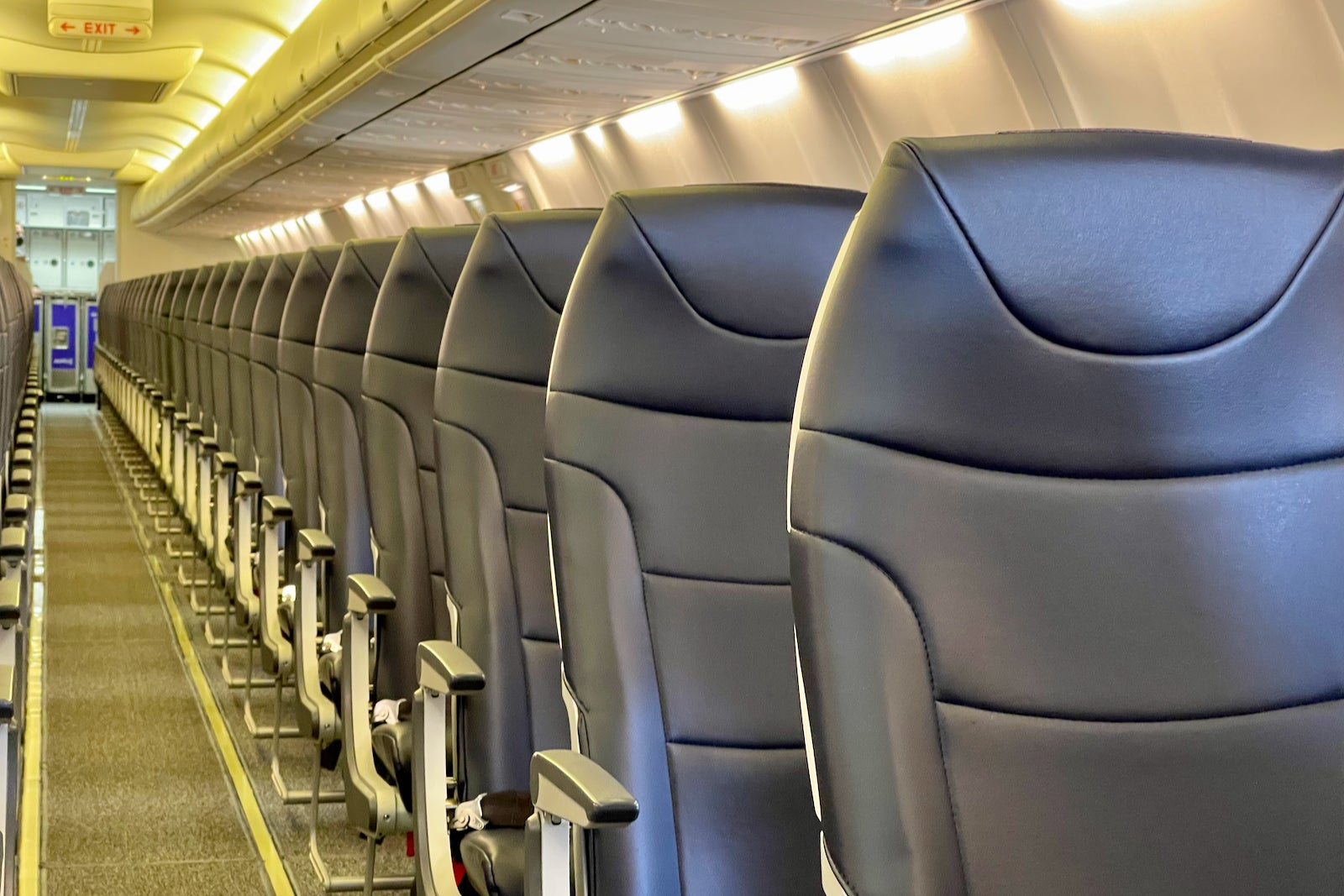 In case you missed it, there’s a brand-new airline in the U.S.

That’s Avelo Airlines, an ultra-low-cost discounter, with operations based in Burbank (BUR) near Los Angeles. On Wednesday, the carrier inaugurated service with just one route between BUR and Santa Rosa (STS) in California’s famed wine county.

Avelo plans to quickly ramp up its operations, growing to 11 routes on the West Coast, including many markets like Arcata/Eureka, California (ACV) and Pasco, Washington (PSC), that the carrier believes are underserved.

Avelo's fleet consists of three Boeing 737-800 aircraft, as well as three smaller 737-700s that are currently being retrofitted in San Bernardino.

As you’d expect for a budget carrier, the 737s are configured in a super-dense configuration. Here’s a look inside — and a guide on where to sit when flying on Avelo’s Boeing 737-800.

Most seats have a measly 29 inches of pitch, making it a tight squeeze for just about any adult. For context, the same plane flying for Southwest is outfitted in an all-coach configuration with 175 seats.

The seats themselves are Acro Series 6, which feature a built-in curve around the hip level for two additional inches of knee space.

Despite these so-called improvements, I’d personally avoid these seats entirely for flights longer than two hours. They’re both tight and poorly padded.

Fortunately, most of Avelo’s routes are currently blocked for under two hours. Plus, with fares starting at just $19, I’d even consider doing it again — for a short hop.

If you’re looking for some more space, there are 60 extra-legroom seats located in the forward section of the cabin, spanning rows 1 to 8 and 22 to 24, as well as the exit rows 20 and 21.

These can be purchased for $15 and up. Extra-legroom seats sport between 32 and 35 inches of pitch, offering a much more comfortable ride.

All seats are just 17 inches wide, making for one of the tightest configurations in the skies.

Currently, all seats recline, except for those in the exit row and last row. But that won’t be the case for much longer.

Andrew Levy, Avelo’s founder and CEO, told TPG that the current plan is to lock the seats in a pre-reclined position to avoid making it an extra-tight squeeze for those trying to get up during the flight.

Levy noted that they're still considering keeping the recline option for the extra-legroom seats, and no final decision has been made yet.

Aisle armrests can be raised or lowered, but those in the window are fixed in the downright position.

Since Avelo doesn’t offer any inflight entertainment or power outlets, there’s nothing blocking the under-seat storage, giving you the (much-needed) opportunity to stretch your legs.

There’s a single mesh seat-back pocket that’s quite flimsy, so don’t expect to store more than a magazine or water bottle there. Instead, you could put a laptop or iPad in the seat’s built-in literature pocket.

Tray tables measure 17 inches wide and 7.5 inches long, which is definitely too small for a 13-inch (or larger) laptop. After all, my 11-inch iPad Pro barely fit.

Avelo charges $35 for full-size carry-on bags, so there should be no problem finding overhead bin space if you decide to bring a rollaboard.

There are three lavatories on Avelo's 737s, one in the front, and two in the back.

If you want the best seat in the house, you’ll want to select seat 1A, 1B or 1C. These bulkhead seats don’t have a partition in front of them, meaning that you’ll have tons of space for your feet.

The port side bulkhead — seats 1D, 1E and 1F — also sports tons of legroom, but note that there’s a galley wall in front.

Also, all bulkhead armrests are fixed in place, cutting into the already tight 17 inches of width.

The exit rows (20 and 21) are also a great option for additional legroom. They offer 38 inches of pitch.

The remaining extra-legroom seats have varying amounts of pitch, depending on the side of the aircraft and row number.

Fortunately, I was carrying a tape measure, so I compiled the following chart of pitch measurements.

All the remaining seats, except for the aforementioned bulkhead Row 1, have just 29 inches of pitch.

As for what to avoid, steer clear of the last row (37). The proximity to the lavatories could be bothersome, and the galley wall might make you feel claustrophobic.

Also, row 12 has missing windows, so if you’re after the perfect “Wing View Wednesday” shot, you’ll want to sit elsewhere.

Avelo's Boeing 737s are outfitted in one of the tightest configurations in the industry.

For now, most of the carrier's routes are shorter than two hours, meaning that you won't be cramped for too long.

Then, when you land, you'll likely be happy that you saved some money on your vacation. For now, one of Avelo's biggest selling points is fares that start at just $19.