A taste of Austin: Why Austin Airport keeps its vendors local to create an airport for foodies

Articles
Andrew Kunesh is a senior editor at The Points Guy covering loyalty programs. He's been a miles and points fanatic since 2014 and previously wrote for Upgraded Points and Credit Karma. Outside of the travel world, Andrew is a cyclist, craft coffee aficionado and — despite now living in NYC — a Chicagoan at heart.
Follow
Sept. 13, 2022
•
8 min read 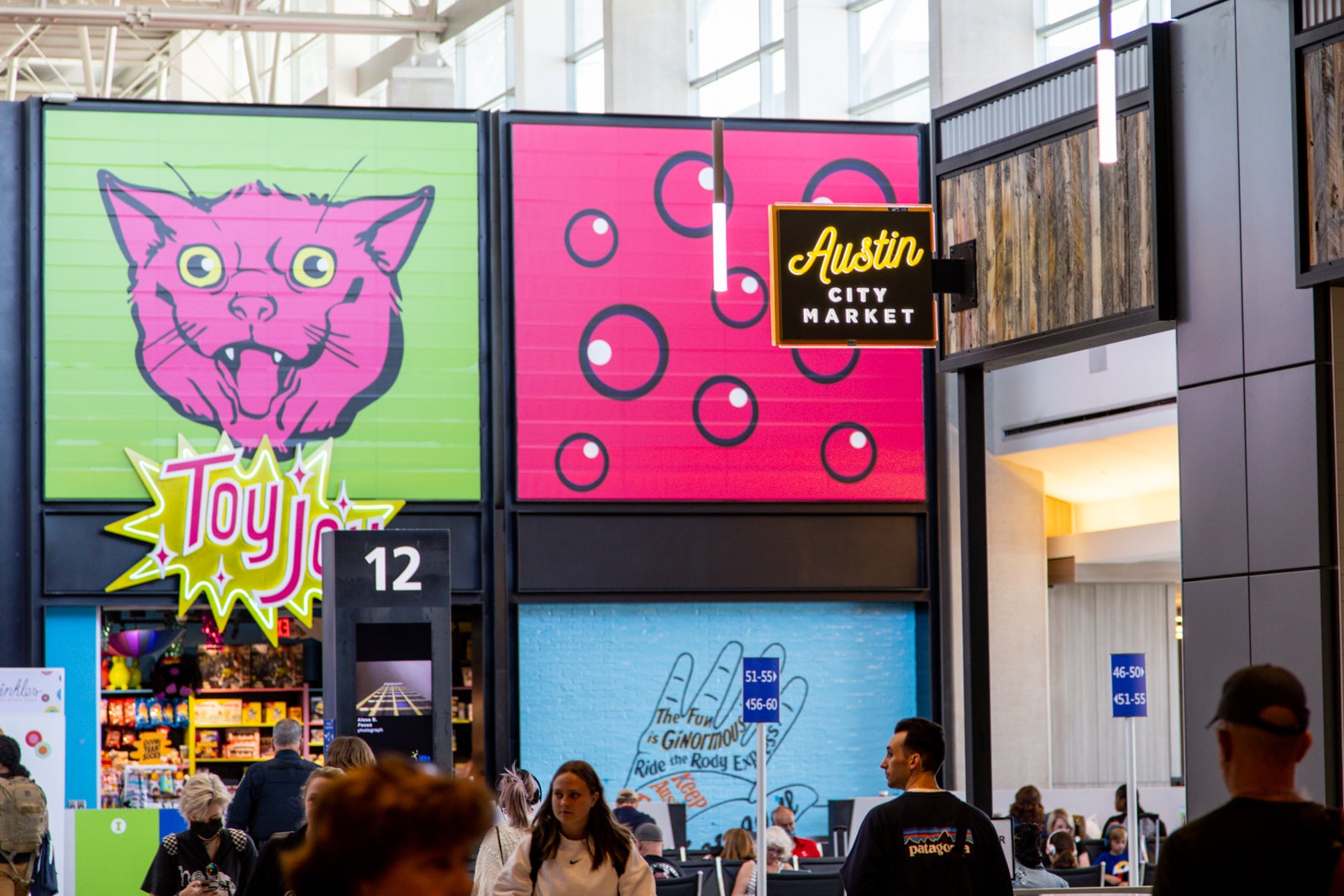 Austin-Bergstrom International Airport (AUS) is one of the airports I fly to most frequently. Two of my close friends recently moved to Austin and my parents have spent time there. But, unlike at most airports, I don't often use the Delta Sky Club when I fly in and out of the airport. Instead, I frequent its many eateries.

See, Austin Airport's food offerings aren't your standard array of Auntie Anne's, McDonald's and Starbucks. Barring two exceptions, the airport has an array of hand-selected local Austin eateries. In the terminal, you'll find everything from breakfast tacos to barbecue to small-batch coffee, giving you a taste of Austin before you step outside of the airport's walls.

This makes the airport unique — especially when compared to other airports in midsized cities. But why does Austin do this? How does it source food vendors? And most importantly: Where should you eat the next time you fly to, from or through Austin?

Those are all great questions — and I'll attempt to answer them here. I had the privilege of sitting down with John Gallo, the airport's aviation administrative and business development manager, to discuss how the airport has sourced unique vendors over the years and how local restaurants keep their flair within the confines of an airport.

How — and why — Austin Airport keeps its food local

In a meeting space above the terminal at Austin-Bergstrom International Airport, I sit down with Gallo.

This space is distinctly different from the rest of the airport. Below us are endless shops, restaurants and cafes that were curated by Gallo and his team. But up here, it's a '90s-style conference room. True to Austin's fast growth as an emerging airport hub, this room will soon be repurposed as a new airline lounge.

Gallo has been in airport management for 17 years and now leads up properties and concessions at AUS. In his own words, he oversees "all revenue aspects of the airport, minus parking." This means everything from airline contracts and cargo land leases to advertising and — of course — food and beverage.

I started our discussion by asking why Austin keeps the majority of its concessions local. His response was very poetic: "We're the front door of the city; we're the first and last thing that anybody experiences when they come [to] and leave Austin." He reiterated that Austin is a food-centric town and that the airport wants to "exemplify the unique culture of Austin."

The airport focused on local-first food options when it opened in 1999. "We wanted to bring what you would experience out on Sixth Street or Rainey Street to the airport," said Gallo. In turn, the airport put both food and music at the forefront of airport planning before the airport opened and as it continued to expand over the years.

And this makes sense. Austin is home to many of the culinary wonders of the U.S. South. You'll find everything from top-notch barbecue to breakfast tacos in the city's many restaurants, cafes and food trucks. Likewise, you'll find these in the terminal at AUS. I can't think of another airport where you can get a breakfast taco. And when it comes to music, the live music that lives in Austin's many bars and venues can be found at eight stages around the airport.

So, how does Gallo's team find local restaurants? The process isn't as glamorous as it sounds, but it sure is rigorous.

The airport will issue a request for proposal when contracts are up for bid. Within this RFP is an outline that shows what the airport wants to see pitched. For example, it might request a local restaurant that serves a specific kind of food. After this, management companies bid on the contract in partnership with a local vendor. And if you're curious, the airport is leased out on concessions until 2027.

Bringing a restaurant concept to the airport doesn't come without constraints, though. Numerous security requirements surround restaurants in airports; for example, knives often need to be chained to walls per federal security requirements. The airport and its management companies work with new vendors to work within these constraints to keep the aesthetics and feel of airport restaurants similar to their original, off-airport locations.

You'll feel this when you eat at the Austin airport, too. The Second Bar + Kitchen airport outpost feels similar to its location on the north side of the city. Likewise, the Jo's Coffee location right after security takes hints from its locations around Austin and feels like an actual Austin coffee shop in the middle of an airport terminal. This is far more interesting than your run-of-the-mill Dunkin' experience at JFK.

Where to eat at Austin Airport

So, what are we eating? Let's run through your options.

Starting with my personal go-to, you can head to Salt Lick BBQ for mouth-watering brisket, pulled pork or just about anything else you'd expect from one of Austin's best barbecue joints. You can even buy an entire brisket to go, letting you bring the joy of Texas barbecue back to your friends and family. There's also a full bar if you'd like a beer with your brisket.

The Salt Lick team also recently opened a burger restaurant at the airport dubbed Thurman's. Located near Gate 21, you'll find a basic food menu with burgers, fries and Philly cheesesteaks. It's a great stop for a quick lunch, especially if you're hungry for fast-food classics.

Tacodeli is another Austin classic, serving up breakfast, lunch and dinner tacos. The airport location has all the classics and is the perfect place to get one last breakfast taco before your next trip home from the capital of Texas.

Those looking for a cup of joe have two interesting options. While not exactly local, you can check out the Costa Coffee machine near Gate 13. Just enter your order on the machine's touchscreen and a robot arm will prepare your cappuccino, latte or whatever else you desire before an early flight.

You can also head to Jo's Coffee near the terminal entrance. The space looks like an outdoor dining area, complete with an Austin-style food truck. You'll find coffee, breakfast tacos and pastries, and a to-go coffee stand where you can fill up a cup of coffee, pay with a QR code and be on your way in seconds.

Hoping for a local craft beer? Check out The Beerdrop near Gate 13 inside Austin City Market. You'll find a hip beer bar run by Austin Beerworks, though other breweries are available to sample. There's plenty of seating at the bar and at tables scattered around, making it a good place to work on a laptop or catch up with your travel companions before a long flight.

Second Bar + Kitchen is one that Gallo mentioned as being one of the most popular in the airport. It's a sit-down concept, serving up farm-to-table American food, cocktails and brunch. It's also one of my personal favorites at the airport.

This isn't an exhaustive list. Other great options around the airport include The Peached Tortilla, Hut's Hamburgers and JuiceLand. Wherever you pick — sans Starbucks or Einstein Bros. — you can rest assured that you're enjoying local Austin cuisine and extending your stay in the city by one more meal. When I talked to Gallo in June, all of the airport's venues had reopened for service after extended closures during the pandemic, so you have plenty of options.

Austin-Bergstrom International Airport has been able to do what few airports have: make the airport a destination for local food and entertainment. It's done this by leaning into what keeps Austin weird: its obsession with breakfast tacos, barbecue, live music and craft beer.

Other airports are taking notice of Austin's success in bringing local concessions to the airport. Gallo told me that other airport directors have flown to AUS and are looking at ways of replicating this in their own cities. So, while your home airport might be McDonald's after Starbucks after Dunkin' for now, change might be coming — especially for midsize cities with smaller airports but lots of hometown pride.

Featured image by WYATT SMITH/THE POINTS GUY
Editorial disclaimer: Opinions expressed here are the author’s alone, not those of any bank, credit card issuer, airline or hotel chain, and have not been reviewed, approved or otherwise endorsed by any of these entities.