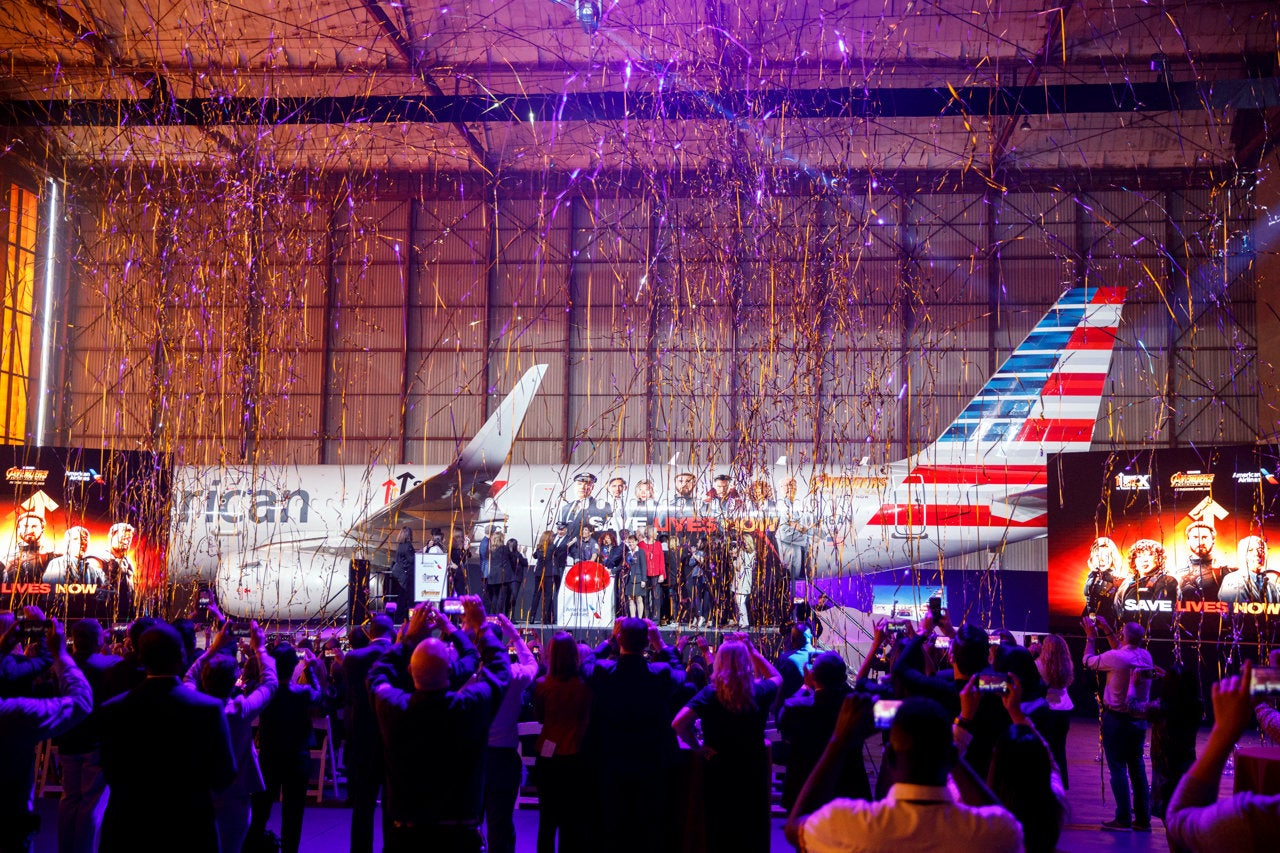 American Unveils Stand Up To Cancer, Marvel Avengers A321T Livery
This post contains references to products from one or more of our advertisers. We may receive compensation when you click on links to those products. Terms apply to the offers listed on this page. For an explanation of our Advertising Policy, visit this page.

Apart from a few exceptions such as American Airline's heritage livery, it is not often you see AA planes with unique livery. So I was excited to see what was in store at the special livery unveiling ceremony for American's new Stand Up To Cancer and Marvel Studios Avengers-themed plane.

(AA also recently unveiled a new way to earn 10 AAdvantage miles per dollar through its partnership with Stand Up To Cancer – but more on that in a moment).

After arriving at Los Angeles LAX for the event, we were bussed to one of American's maintenance hangars on the west side of the airport. While riding the bus, I actually spotted ANA's Star Wars livery 777-300ER #JA789A. But, stepping inside American's massive hangar for the event was even cooler.

Speaking with one of the facility staff, I learned that the "superbay" hangar was built in the 1970s and is capable of housing 747s. From outside the hangar, I could see the new mid-field concourse at LAX under construction. And inside, as one might imagine, the special aircraft was hidden behind a massive curtain.

Of course, being Los Angeles, a red carpet was set up for local TV crews, photographers and attendees to take pictures.

Additional LAX-based AA employees, including some of the "AAngels" from the Admirals Club, were also in attendance. One actually mentioned reading Ethan's recent review of the new LAX Flagship lounge.

As we arrived closer to the unveil, more American employees, doctors and representatives from Stand Up To Cancer arrived, including Shandra Fitzpatrick, an AA customer service agent and thee-time cancer survivor. Everyone seemed to want to have their photo taken with Shandra.

Plus, there were lots and lots of hugs. As someone who has lost family to cancer, I could understand why this was a truly happy moment to share.

After some short speeches, including one by Dr. Phillip A. Sharp, it was getting closer to the big unveiling.

A new video rolled about the superhero partnership with American Airlines, Stand Up To Cancer and Marvel Studios' "Avengers: Infinity War."

This left a few teary eyes in the crowd.

Finally, it was time to push the button and see the special aircraft.

Featured alongside Marvel heroes were American Airlines employees and doctors from Stand Up To Cancer.

The crowd got the opportunity to walk around the aircraft and check out both sides of the plane, which featured different heroes and employees.

Being a bit of an #AVGeek, I searched the registration number -- N116AN -- after the big unveiling to learn a little bit more about the aircraft's history. The Airbus A321-231 is in a transcontinental configuration.

Looking at FlightAware – you can see one unusual destination for an aircraft that typically flies between LAX-JFK, SFO-JFK, and occasionally JFK-BOS. Flight records show it flew to Tulsa, Oklahoma to have the new livery applied.

You can see a time-lapse video of how the livery was applied in the YouTube video below:

The aircraft even flew from Tulsa (TUL) to LAX at night in order to keep the new livery a total surprise upon arrival.

On the port side of the aircraft are Black Widow, Captain America and Doctor Strange from Marvel Studios' "Avengers: Infinity War," along with AA Customer Service Agent Shandra Fitzpatrick and AA Pilot Ron France. Among those on the starboard side are Iron Man, Black Panther, Thor and AA employees Juan Baquero of fleet service and AA Flight Attendant Michelle Ballard. Stand Up To Cancer Scientific Advisor Dr. Phillip A. Sharp and SU2C researcher Dr. Marcela Maus are also featured.

If you hope to catch a glimpse of this unique aircraft, keep an eye out if you are at LAX or JFK, as it will be flying transcontinental service.

The new livery comes as part of American Airlines' ongoing partnership with Stand Up To Cancer. As part of the partnership, AAdvantage members can receive 10 miles per dollar when they donate $25 or more to Stand Up To Cancer. You can find the page to donate at SU2C.org/AmericanAirlines. If paying by credit card, expect to also receive your normal purchase credit card spend (typically 1 mile or point per dollar).

I would not expect the donation to credit as airline or travel spend. Beyond the charitable reasons to make such a donation, this activity is one way to extend one's expiration date if AAdvantage miles are about to expire -- or a way to top up your account if you are close to an award redemption.

It's worth noting that the terms and conditions state it may take "up to 8 weeks" for the miles to post to your account. "For charitable deduction purposes, each mile is valued at 3 cents per mile," the terms state. "The receipt of miles may reduce the tax deductibility of your contribution." 100% of all donations received will support Stand Up To Cancer's collaborative cancer research programs.

What do you think of American's new livery? Have you donated to SU2C to earn miles in the past? Did it post with any travel category bonus? Please share your experience in the comments.

Related stories
Legislation that could gut credit card rewards set to move through Congress
Would you stay at 1 of these 8 haunted hotels this Halloween?
Southwest winter flash sale: Get one-way flights for as low as $29
You can currently buy points and miles with up to a 100% bonus — but should you?
Featured image by Patrick T. Fallon