Articles
Jordan Allen has produced content for TPG on everything from travel trends to flight deals.
Follow
July 11, 2019
•
5 min read 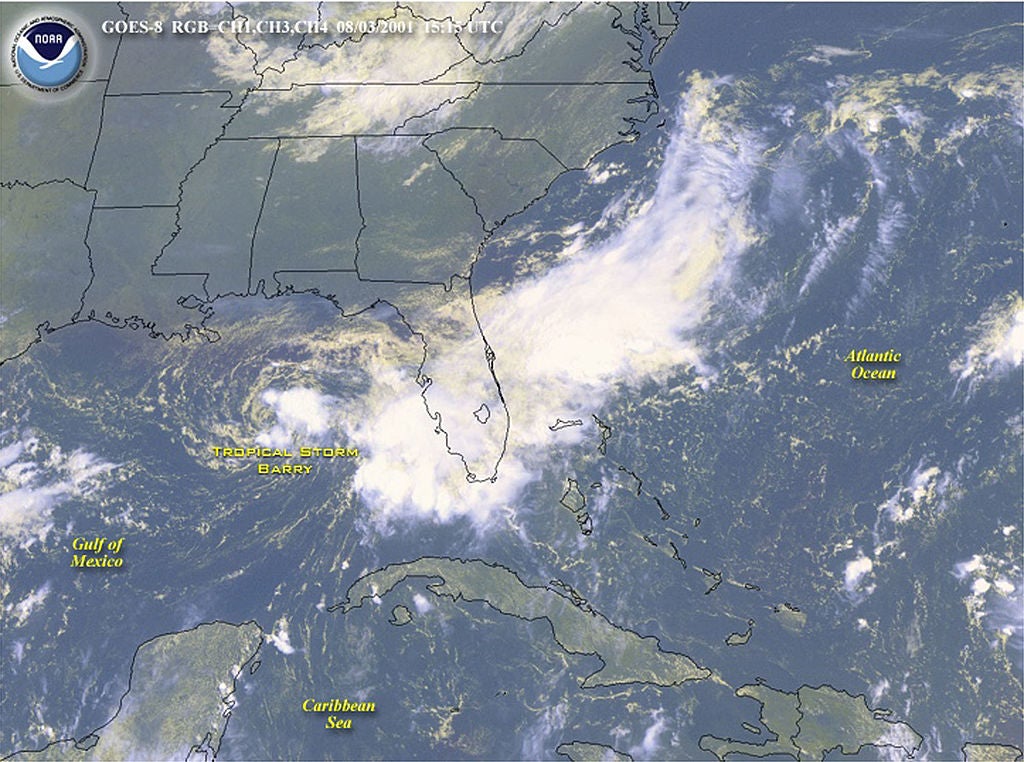 Airlines Issue Waivers Ahead of Tropical Storm Barry
This post contains references to products from one or more of our advertisers. We may receive compensation when you click on links to those products. Terms apply to the offers listed on this page. For an explanation of our Advertising Policy, visit this page.

Tropical Storm Barry is now the second named storm of 2019.

According to The Weather Channel, Barry formed from a disorganized cluster of storms into a full-blown system July 11, Thursday morning, in the northern Gulf of Mexico. Reports are also saying that it has the potential to become a hurricane before it makes landfall this weekend.

Barry is currently expected to bring major flooding rainfall, storm-surge flooding and high winds to parts of Louisiana, Mississippi and Alabama. There's also a "major threat" of rainfall flooding over the Gulf Coast and lower Mississippi Valley. Hurricane watches and mandatory evacuation orders have since been issued.

New Orleans residents are being warned to prepare for impact from Tropical Storm Barry. With the potential for heavy flooding, NOLA Ready — the City of New Orleans’ emergency preparedness campaign — is warning people to prepare their supply kits and review their plans. They're also being told not to venture into floodwaters.

In anticipation of Tropical Storm Barry, many US airlines are issuing travel waivers to people looking to evacuate the affected areas. So far, this is who is pitching in:

American Airlines is allowing customers to change their trips with no change fee. Qualifying travelers must be traveling on an American Airlines flight, have purchased their ticket by July 11, 2019 and are scheduled to travel between July 11 and July 14, 2019. Passengers are not permitted to change their origin or destination city and they must rebook in the same cabin or pay the difference.

For a full list of eligible locations in which the waiver applies, click here. Changes can be done online or by calling the reservation desk.

If you're flying to or from New Orleans (MSY) or Houston (IAH), Alaska Airlines is offering a waiver if you would like to change or cancel your flight. Original travel dates must be on or between July 11 to July 12 and the new travel dates will fall between July 11 and July 16. The waiver is only valid for tickets issued by Alaska Airlines, and they warn "if you purchased your tickets through a third party, such as Expedia, another travel agency, or another airline, contact them directly for assistance." Change your flight or cancel your trip here.

Jetblue Airways is issuing waivers for flights to or from New Orleans (MSY) for dates between July 10 and July 13. Customers will be able to rebook their flights for travel through Saturday, July 20 online in the ‘Manage Flights’ section of their website or by calling 1-800-JETBLUE (538-2583) before to the departure time of their original flight. Rebook here.

Frontier Airlines is allowing "one itinerary change" for travelers flying to or from Houston (IAH), Jackson (JAN), Lafayette (LFT) and New Orleans, LA (MSY). Customers must be scheduled to fly between July 11 and July 14 and have purchased their ticket on or before July 10. Travel must be completed on Friday, July 26 at the latest and origin and destination cities may be changed. IIf your flight was canceled, you can also request a refund. Learn more here.

Much like the rest of the guidelines above, Spirit is offering waivers for those traveling on their airline between July 11 and 14 to or from IAH or MSY. Modification Charge and Fare Difference will be waived through July 19 — and for travel after this date, a fare difference may apply. Rebook here.

If you plan to fly United, the airline is waiving change fees for travelers who are scheduled to fly between July 11 and 14 to/from a wide variety of airports in Tropical Storm Barry's path. This applies to any ticket "as long as travel is rescheduled in the originally ticketed cabin (any fare class) and between the same cities as originally ticketed." Change fees will be waived entirely until July 21. After that, customers may have to pay for a difference in fare. See if your airport qualifies here.

Southwest Airlines customers have already had the option of canceling flights for a full refund up to just before departure since yesterday. They're also allowing customers to move their original flights up to 14 days from their originally scheduled date. Changes apply to customers flying from Panama City Beach (ECP), Pensacola (PNS), New Orleans (MSY), Corpus Christi (CRP) and Houston (HOU) from (give or take) July 9 to July 14. Change here.

Delta's changing policy pretty much aligns with the rest of the airlines above. Passengers with flights scheduled to or from Baton Rouge (BTR), Gulfport (GPT), Jackson (JAN), Lafayette (LFT), Mobile (MOB) and New Orleans (MSY) between July 12 to July 14 will have their change fees waived if they switch to a flight on or before July 17. Delta advises that those who want to change their flight do it on the My Trips page on delta.com and click on "Modify Flight" and then choose "Start Flight Change." The fee that appears initially with be will be waived before to check out. Click here for more information.