Articles
Brendan Dorsey is an Associate News Editor at TPG who covers nearly everything for TPG including aviation, credit cards, points, miles, ride-hailing services and more. He previously worked for TIME.
Follow
May 22, 2018
•
5 min read 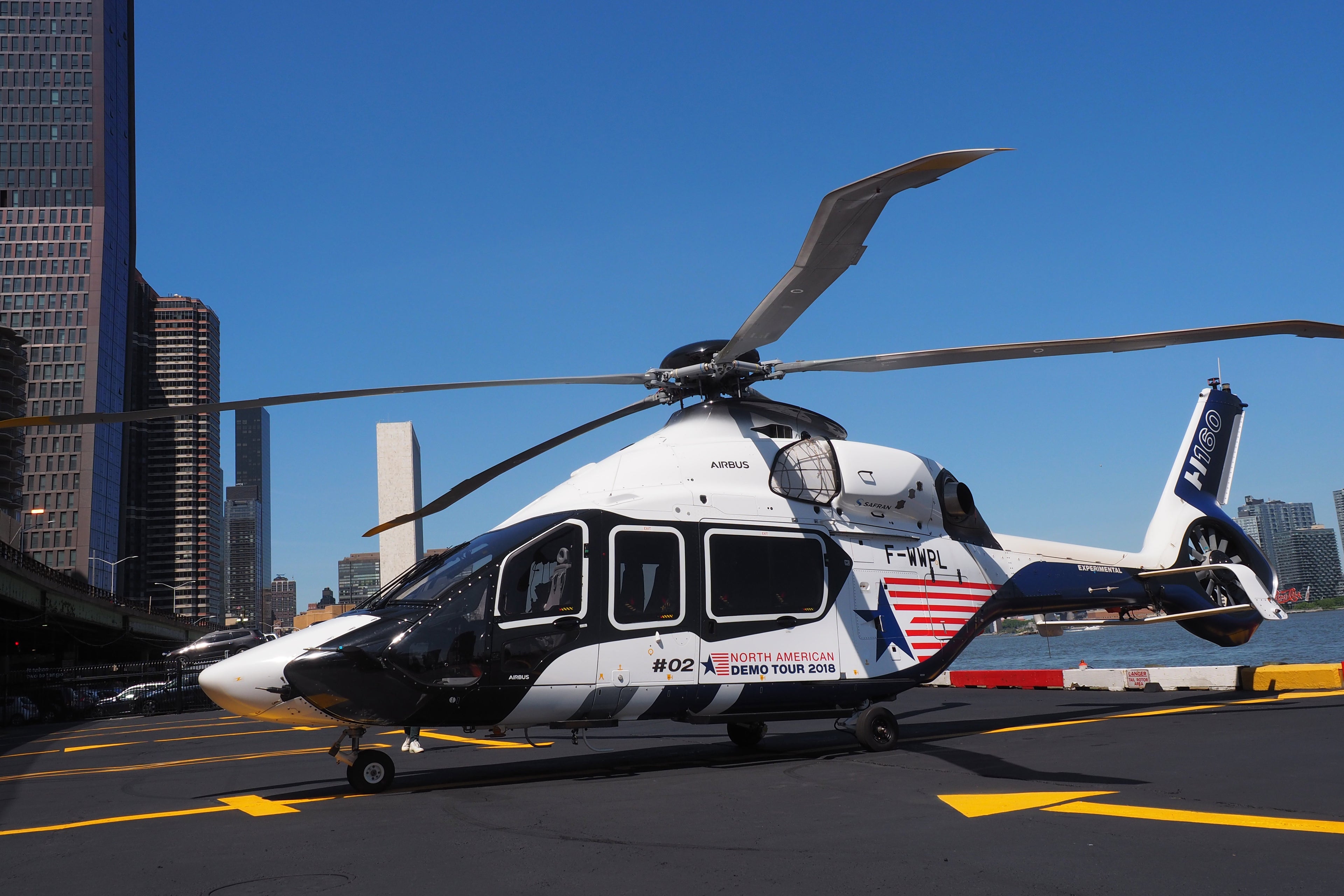 A Tour of Airbus' New, Quieter H160 Helicopter
This post contains references to products from one or more of our advertisers. We may receive compensation when you click on links to those products. Terms apply to the offers listed on this page. For an explanation of our Advertising Policy, visit this page.

Although helicopter travel isn't our normal beat, we had the opportunity to check out a new piece of equipment that is promising to transform the way helicopters are designed: the Airbus H160, the world's first civilian helicopter made entirely from composite materials.

We checked out the second prototype, one of three currently flying, on display at the BLADE Lounge East in Manhattan. In development since 2011, the European-made chopper took its first flight in 2015, but won't be available for its customers until next year. Prototype number two, with the French registration F-WWPL — Airbus Helicopters is based in Marseille, France — is currently on a North American demo tour.

The aircraft is in the so-called medium helicopter category, between its smaller sibling H145 and its big brother H175. It can seat up to 12 passengers and two pilots and has a maximum take-off weight of 12,500lbs.

Composites are lighter than metals, and that means performance. Powered by two French-made Safran Arrano turbine engines, the helicopter cruises at 177 mph, relatively high for a helicopter, and has a range of about 550 miles. Compared to similar models, it's also more fuel efficient with 15% less fuel burn, Airbus Helicopters says.

The most obvious visual difference between the H160 and other helicopters is the shape of the rotor blades. Airbus developed Blue Edge curved blades that help cut down significantly on noise. H160 test pilot Oliver Gensse told TPG that the blades reduce noise up to 50% compared to other helicopters — an important feature when trying to comply with noise ordinances.

This makes it more comfortable for passengers too. In fact, there's significantly less vibration, making it the H160 "the most comfortable in the fleet," according to Gensse. That makes it also a good match for VIP services. (Just how VIP? The list price, according to several French media, will be up to 15 million euros or $18 million. Outfitting the cabin for VIP customers will add to that.)

The aircraft comes with an advanced heating and AC system that works so well Gensse said was sweating when he was flying the H160 in -40° Celsius temperatures (equivalent to -40° F as well) in Yellowknife, Canada. And that's another feature of the aircraft, according to its maker: It performs quite well in extreme weather conditions.

The enclosed tail rotor is a telltale mark of Airbus Helicopters, and before it of its predecessor, Aerospatiale. Instead of free-standing blades, it's enclosed in a circle known as fenestron. Itis actually slightly tilted at 12 degrees. The helicopter's flight engineer, Nicolas Certain, pointed out the different devices attached to the aircraft used to measure different variables on test flights (see the top of the tail in the photo below).

Since the helicopter is still in development, Airbus is still making tweaks to the H160's construction. Certain actually installed metal edges on this prototype to help it fly better which may be incorporated into the final version. The biplane stabilizer, which helps the H160 maintain level flight, has also been equipped with temporary metal edges designed and installed by Certain.

Flight test measurement devices were installed in the space normally used for cargo.

Although the aircraft can hold up to 12 passengers, this prototype only had seating for six (plus two pilots)

Gensse said the H160 is easy to fly, nimble and quite responsive— its advanced autopilot system makes things even simpler for the pilots. The Helionix flight controls system requires fewer pre-flight checks too, making it easier to get the helicopter off the ground. It can take less than two minutes to get the helicopter into the air, according to Genesee.

Once in passenger service, the H160 won't look inside like it does below, with monitoring and test equipment that can measure, according to Certain, 800 different parameters in flight.

While BLADE reps said the company wouldn't be operating the H160 anytime soon, Airbus said that once the aircraft is available in 2019 it will primarily be used for transport in private and business aviation purposes but will also be outfitted with for emergency workers. Its large cabin could be useful for EMS missions.

Check out this video to see the H160 in action: