The 5 Most Ridiculous Things Confiscated at TSA Checkpoints in March 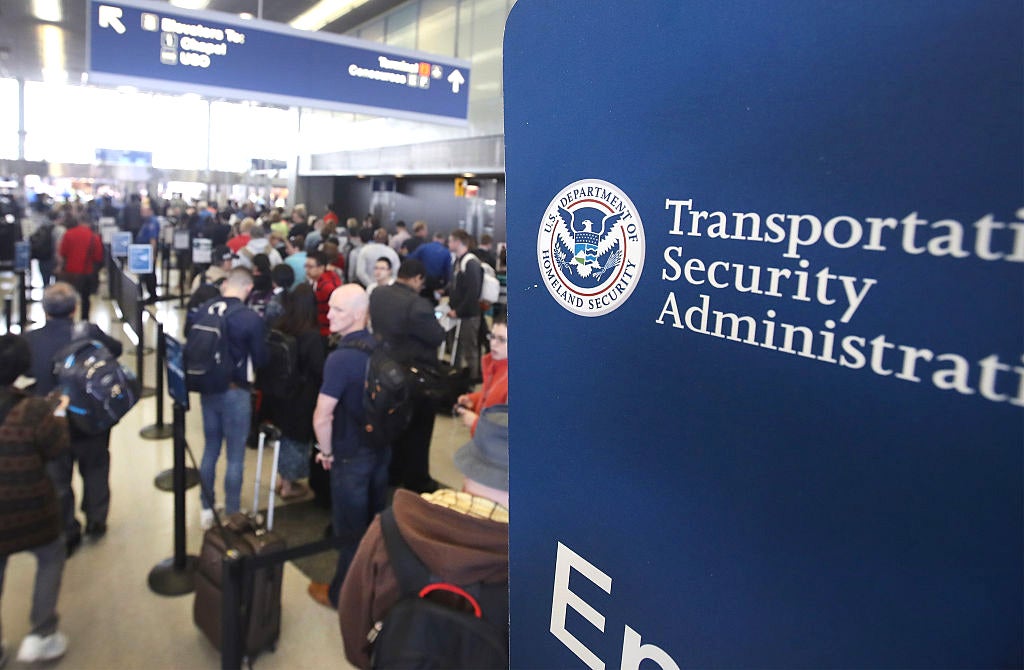 The 5 Most Ridiculous Things Confiscated at TSA Checkpoints in March
This post contains references to products from one or more of our advertisers. We may receive compensation when you click on links to those products. Terms apply to the offers listed on this page. For an explanation of our Advertising Policy, visit this page.
Sign up for our daily newsletter

Spring is upon us! It's time to whip out your shorts, take your allergy medicine and buy all the flowers you can. Before packing up for your spring vacation though, make sure those pills and flowers are TSA-approved (and legal). And don't forget to pack your knives and guns in your checked luggage — those items are never allowed in your carry-on!

As if the spork wasn't already an engineering feat itself, this fork/spoon/knife combo sent everyone at TSA into a tizzy after it was found in a passenger's carry-on. TSA agents found this "tactical spork" at Myrtle Beach International Airport (MYR) and had to confiscate this nifty utensil. This passenger might've starved when he got home without his tactical spork...if only he'd remembered to pack it in his checked luggage.

Ahhh, the spork... The result of the legendary marriage between the spoon and fork that made it possible to eat the franks and the beans with one utensil. But wait! Not so fast! Now there’s a tactical spork that allows you to defend said franks and beans from ne'er-do-wells. While sporks are permitted in carry-on bags, tactical sporks must be packed in checked baggage. The tactical spork pictured here was discovered in a carry-on bag at the Myrtle Beach International Airport (MYR). — Clarification: The spork and knife fit together to make one piece. The knife is hidden when assembled. The spork by itself would be permitted as a carry-on, but the knife would have to go in checked bags.

2. Dude, That's Not What Getting Baked Means

This passenger at Anchorage International Airport (ANC) thought he could outsmart TSA by throwing his goods in a microwave oven and checking the package. This plan was only half-baked because authorities found the bag and were forced to call the police. According to federal law, anytime TSA agents find marijuana in any capacity they are forced to contact law enforcement.

This bag of marijuana was discovered inside of a microwave oven that was being transported via checked baggage at Anchorage (ANC). We’re not looking for drugs, but when discovered, our officers must notify the police. ... The toast setting is located between the baked potato and pizza buttons. ... Under Federal law and many State laws, it’s a crime to possess or transport any detectable amount of marijuana.  TSA does not have any regulations that address the possession or transportation of marijuana and cannabis infused products, such as CBD oil.  However, our officers are required to notify law enforcement if they discover marijuana, or other items that are illegal under State and Federal laws while screening you and your accessible property. ... Having a State-issued cannabis card or other documentation indicating that the marijuana is for medical purposes does not exempt you from TSA’s requirement to notify law enforcement.  It is up to the responding officer, not TSA, to determine if possession of the marijuana is authorized under State law, or whether to make an arrest or confiscate the item if it is illegal.

Dead bugs cannot fly, physiologically speaking. But dead bugs can fly on aircrafts. This smart-traveler tweeted TSA to see if her husband's bug collection was TSA-approved. They are, indeed, and they are allowed as a carry-on item. It is, after all, a bug's life.

These can fly! Well… they can fly on the plane as a carry-on item, but they can’t actually fly anymore. Those days have clearly passed for this swarm. They’ve been pinned down for quite a while on a project. I’m guessing your husband made you ask because he didn’t want to be a pest and bug us, right? … This is a screenshot of a tweet sent to the AskTSA account on Twitter. … Have you ever wondered whether or not you can pack a certain item? If you're a regular follower of this account, I'm sure you can think of many situations where it would have behooved somebody to send us a picture first. Well, fret no more! Now you can do just that… … Simply snap a picture and tweet it to AskTSA (twitter.com/asktsa), or send it via Facebook Messenger (facebook.com/asktsa) and our team will get back to you promptly with an answer. … And that's not all. Contact us about any TSA related issue or question you might have. We can even help you if you don’t see TSA Pre✓® on your boarding pass. … We look forward to answering your questions, 9am-7pm daily. #AskTSA #TSATravelTips

4. Pills for that Stabbing Pain

We've said it once, we've said it one million times. Knives are never allowed on any aircraft, even if you're hiding it in your vitamins. This passenger at George Bush Intercontinental Airport (IAH) thought he could trick TSA with his iron supplement, but joke's on him — that knife will remain in the possession of TSA.

Looks like somebody put their iron “supplement” in the wrong vitamin bottle. Packing like this can really cut into the time it takes to get to the gate and can lead to fines and arrest. ... This knife in a vitamin bottle was discovered in a carry-on bag at the George Bush Intercontinental Airport (IAH). Knives are always prohibited in the cabin of the aircraft, but may be packed in checked baggage.

2018 has been a record-breaking year, already, for the number of guns TSA has confiscated at security check points. Between March 19-25, TSA discovered 79 firearms in carry-on bags. 71 of those guns were loaded and 24 had a round chambered. As a reminder, firearms are never allowed in carry-on baggage. They are, however, allowed in checked bags and following proper protocol with your airline. As an additional reminder, carrying a firearm through a security checkpoint will hold up the line, which will cause delays, and do you really want to be that guy?

TSA officers discovered 79 firearms last week in carry-on bags around the nation between March 19th and 25th. Of the 79 firearms discovered, 71 were loaded and 24 had a round chambered. Click on the link in our profile to visit our blog and read more details about the firearms that were discovered. … While firearms are prohibited in carry-on bags, you can pack them in your checked baggage as long as you meet the packing guidelines at TSA.gov … As a refresher, carry-on bags go into the cabin of the plane with you. Checked bags go into the cargo hold of the plane where passengers have no access. … When firearms are discovered at the checkpoint, we contact law enforcement and they decide what happens based on background checks, interviews and local laws. … A firearm at the checkpoint could lead to fines, arrests, missed flights or all of the above. As far as what happens to confiscated firearms, that's up to each local police department.

Our points-obsessed staff uses a plethora of credit cards on a daily basis. If anyone on our team wouldn’t recommend it to a friend or a family member, we wouldn’t recommend it on The Points Guy either. Our opinions are our own, and have not been reviewed, approved, or endorsed by our advertising partners.
See all best card offers
Related stories
News
This reader nearly lost 750,000 Ultimate Rewards points — reader mistake story
News
Lower fuel surcharges: Reward Flight Saver rolled out on all British Airways flights
Guide
6 credit card perks you can gift for the holidays
News
Flying Blue introduces an interactive map with entry award rates, officially adds stopovers: What you need to know