I Spent a Day at America's Worst Airport; Here's What It Was Like

Articles
Samantha Rosen was one of the first 20 employees at TPG. She started as the site's first full-time social media editor and also served as its lifestyle editor.
Follow
Aug. 07, 2019
•
15 min read 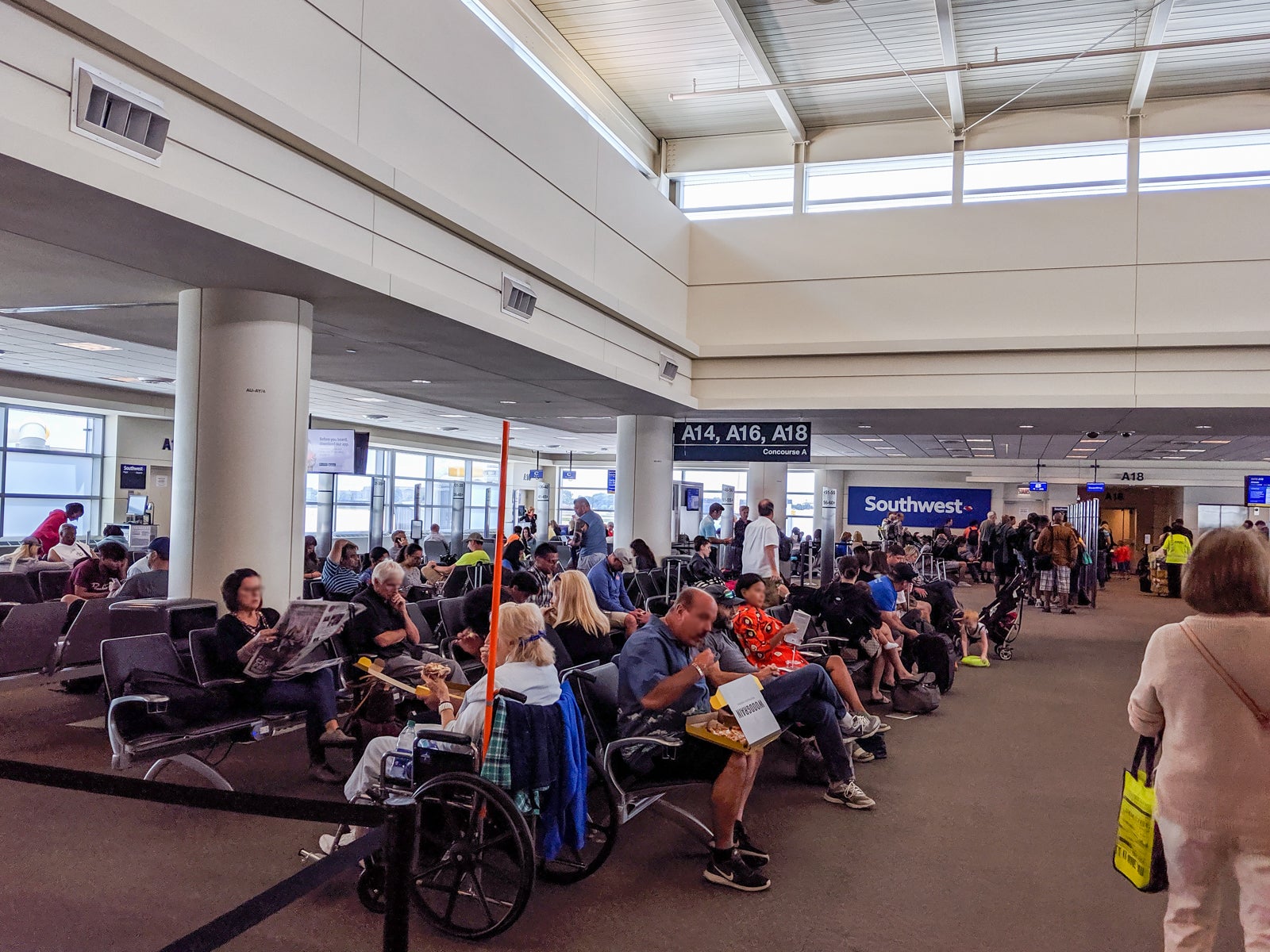 I Spent a Day at America's Worst Airport; Here's What It Was Like
This post contains references to products from one or more of our advertisers. We may receive compensation when you click on links to those products. Terms apply to the offers listed on this page. For an explanation of our Advertising Policy, visit this page.

When you hear the words "glamorous" or "state of the art," Chicago's Midway Airport doesn't exactly come to mind.

In fact, it ranked dead last on our 2019 report of the Best and Worst Airports in the US — yes, even worse than LaGuardia. Often overshadowed by its much larger and better-known cousin, Chicago O'Hare (ORD), Midway (MDW) has a reputation for being no-frills, cheap and basically the bus depot of American airports.

But is the actual airport experience really that terrible? We needed to find out for ourselves, so I bought a flight to Chicago ... just to hang out at Midway.

I arrived on a Southwest flight from LGA around 11:30am on a Tuesday. Midway is a focus airport for Southwest, meaning that it's not exactly a hub for the airline but a very important one in terms of operations. In fact, Southwest is pretty much the only airline that flies into and out of Midway, with the exception of a handful of Delta flights, a Porter flight, an Ultimate Air Shuttle and Volaris. In other words, United and American Airlines loyalists are going to have to look elsewhere.

As soon as I walked off the jet bridge, I was greeted by a gate full of passengers waiting to board their own flight. I immediately went to buy a bottle of water at the closest "restaurant" I could find, but after waiting for a few minutes, went to the one next door. A common theme of my "stay" at Midway was excruciatingly slow service. One $4 water later, and I was on my way.

Since it was too early to grab lunch, I decided to walk around the terminal for a bit. There's only one terminal at Midway, and there are three different concourses: A, B and C. You can walk through the entire airport in about 15 minutes. I was already in Concourse B, so I decided to explore that out first.

There aren't any lounges here except for a USO lounge, for members of the military and their families only, and the restaurants — including a Pork Chop BBQ, Gold Coast Dogs, Woodgrain Pizza and food court — were bland and boring. You can just imagine how packed the gates were.

The entire airport felt something like a Southwest fan convention. As I was walking through, I could hear several gate agents announce delays.

I spoke with Kylie Click, a passenger on a Southwest flight from Midway to Charlotte Douglas International Airport (CLT). Her flight had been delayed 45 minutes, but she said she still preferred flying out of Midway because, in her words, "O'Hare is crazy."

The bathrooms were relatively clean but were in definite need of renovation. When I went to dry my hands under the machine, it sounded like someone was screaming.

I started making my way toward the food court, which connected all the concourses. There was a relatively normal-looking restaurant decorated with Van Gogh and other modern-art prints. Interesting design choice.

The food court was right past security, and I won't lie to you: It was dreary. Options included Mexican food, pizza, Greek, sushi and a Chicago hot dog joint.

I'm not really into hot dogs, but when in Rome (er, Chicago), right? Plus, this place had the longest line, so I figured they were doing something at least somewhat right.

I waited in line for about 15 minutes at Gold Coast Dogs and ordered the Char Dog Combo — a Chicago-style hot dog with fries and a fountain drink — for $9.99. The person in front of me ordered chicken tenders, and they said it was going to be another 10-minute wait.

This is by far not my typical meal of choice, but now I get to say I ate an airport hot dog and lived to tell the tale. It was edible, but I only had a few bites since I was saving my appetite for, you know ... real Chicago food.

If you were looking for something lighter, there was your typical airport convenience store right across from the food court.

After my culinary journey, if you can call it that, I went to check out Concourse A. I passed some promotional banners talking about the airport's future renovation project, which will include a concessions redevelopment program, and both a security checkpoint and garage expansion.

Toni Gibson, an employee at one of the airport's Sweet Indulgences locations, said she was optimistic about the renovation. She told me that she'd been working at Midway for more than two years and that the "renovation will really help" improve how passengers perceive the airport.

Concourse A, in my experience, was the nicest part of the airport. It was noticeably cleaner and more modern-looking than what I'd seen so far.

Still, there was little in the way of public seating.

But they even had an ... FAO Schwarz toy store? That's not something you see in an airport every day.

No self-respecting New Yorker would ever eat at an Einstein Bros. Bagels, but they had one, if you were so inclined.

There was even some overlap with restaurants in the main food court, including a sushi place. The overall vibe at the mini food court felt a lot more like a lounge than any other area in the terminal.

They also had a Neapolitan pizza place, although it would probably haven't looked right to anyone actually from Naples.

But after touring this concourse, I can confidently say that every traveler should hang out in this section of the airport, no matter what gate you're flying out of. It's not great, but it's the best you're going to get.

Imagine having a long delay, and this — a dark, gray, diversion-less seating area — is where you have to wait. Just imagine.

The one saving grace of this concourse was the yoga room, but more on that later.

Leaving the airport to head into the city was another fun adventure. There was ongoing construction, but despite that mitigating factor, the place was still grim.

Toto, we're not in Changi anymore.

As to be expected, pickup was a mess. There were plenty of signs for Lyft but none for Uber, so I wasn't sure if I were even in the right place. My driver later informed me that Uber has been falling behind at Midway and not listening to drivers' suggestions on how to improve the customer experience — so if you're traveling catching a ride here, Lyft is the way to go.

When my Uber did arrive, I got in the car, and an airport employee began very rudely yelling at the driver. There were no signs that said pull up to the front, so she pulled over where she saw me. The staffer told her, though, that if she did that again, she would give her a fine. It was a really uncomfortable situation but could have been avoided if they just had signs that told the drivers where to go.

When I arrived the next day for my flight back to LaGuardia, my boarding pass was missing my TSA PreCheck number. We were really just getting off to a great start here. I waited in line at the check-in counter for an agent to add it.

Another thing I discovered was that Midway doesn't have CLEAR, which is a huge con — especially if you're a frequent flyer.

True to form, my flight was delayed over two hours, even though the weather in both Chicago and New York seemed great. Midway is notorious for delays.

Once I was past security, I decided to kill time in the aforementioned yoga room. It's a small little room that anyone could access. They even played calming music, and it was great for getting in a good stretch in before a flight.

Or, if you're me, it was a great place to lie down for an hour because you're tired and your flight home was delayed for two hours and there was nowhere else to go. Desperate times, people.

(Photo by Samantha Rosen/The Points Guy)The yoga room was quiet and never had more than three people in it. My guess is that people don't really know about it or are intimidated by the fact that it's for "yoga." Don't worry, you can do shavasana like I did and call it a day.

Waiting at the gate was a nightmare, and virtually every seat was taken.

You might think, after all this, that passenger sentiment toward Midway is pretty bleak. In fact, the opposite seemed true.

I spoke with a Allison Grubbs, a passenger also on her way to LaGuardia, who said Midway was her preferred airport. Jamie Ovist, another passenger waiting for his flight, said he "would rather fly here than O'Hare or Milwaukee." Virtually everyone I spoke with here felt the same: It's a lot less hectic than other airports in the area. Truth be told, I had the same impression. There's no prevailing sense of urgency or maze after maze of terminals. Midway is more like an old, rundown strip mall than an airport.

Southwest is beloved by frequent and not-so-frequent flyers for its low costs, friendly service and lack of confusing policies. Midway was something of an extension of the Southwest ethos: It's bare-bones and nothing fancy. You won't find any lounges or sense of classism that plagues so much of air travel. What you will find, though, is a small, relatively calm airport that you are going to pray you don't get stuck in because of a delay.

Oh, and terrible food options — you'll definitely want to bring your own food here. And whatever you do, beware of the hand dryers.