Why skiers everywhere are skipping the chairlift and going uphill instead 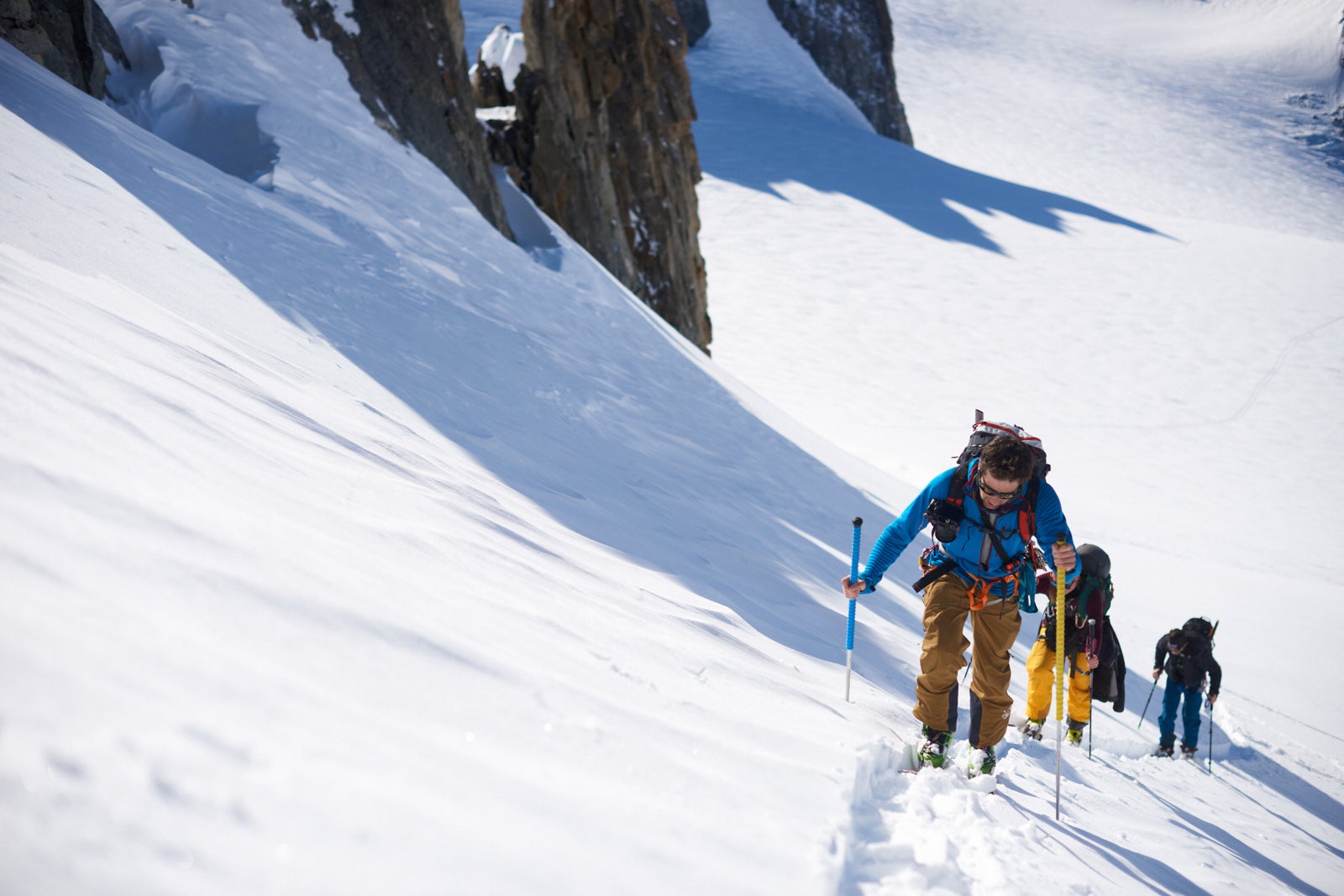 Why skiers everywhere are skipping the chairlift and going uphill instead
This post contains references to products from one or more of our advertisers. We may receive compensation when you click on links to those products. Terms apply to the offers listed on this page. For an explanation of our Advertising Policy, visit this page.

There's something to be said for showing up to your favorite ski resort and hopping on a chairlift, exerting minimal energy and arriving at the summit in a matter of minutes. But if you’ve been to a resort in recent years, you may have noticed some skiers opting for the more difficult option — skiing uphill, or “skinning,” to the summit.

Named after the synthetic “skins” that are attached to the bottom of skis to allow forward, but not backward, progress, skinning (also referred to as alpine touring) has significantly increased in popularity over the last few years.

According to the annual Kottke End-of-Season Survey Report conducted by the National Ski Areas Association during the 2019 to 2020 ski season, 51% of the ski areas that responded offer some sort of restricted uphill access and 7% allow unlimited access — up from 29% during the 2012 to 2013 season, which is when the survey first inquired about uphill policies.

While skinning uphill for two hours to be rewarded with a single, 10-minute ski run may sound ridiculous to some people, others see it as a great alternative to the gym.

“A lot of us just want to get outside,” said Tucker Vest Burton, senior communications manager for the Aspen Ski Company. “I truly love getting outside and skinning with my husband and dog after work — it’s such wonderful exercise.”

While skinning has been gaining popularity and recognition, it is by no means new.

In fact, long before the invention of the mechanized chairlift, it was the only option. During the stone age, hunters and trappers in Mongolia’s Altai mountains would attach animal furs to their skis to help them follow herds of elk and reindeer. For centuries, nomadic people living in cold climates used animal fur or seal skins attached to skis — from which modern-day skins got their name — to travel out of necessity. And as skiing became a recreational sport in the mid-19th and early 20th centuries, the use of skins prevailed.

Today’s reemergence of the sport is due in part to the desire for physical exercise and advancements in alpine touring (AT) equipment, but also the desire to get away from crowds and avoid skyrocketing lift ticket prices. During this year's season, of course, uncertainty around how resorts would handle COVID-19, limited lift capacities, longer lift lines and a desire to remain socially distant also inspired many skier to “earn their turns."

Some ski and snowboard companies, such as Colorado-based Weston, have set their main focus on producing AT-specific ski and splitboard setups. Other companies that have been focusing on traditional ski and snowboard equipment are even starting to produce touring-specific gear.

“Not only has the gear ... vastly improved in the past decade, but we've seen a huge number of both well-established and brand new companies growing into the backcountry market,” Ben Hilley, Weston’s brand experience manager, told TPG in an email.

And with acceleration in alpine touring interest, the timing couldn’t have been more perfect.

“In the past decade, we've seen crowds and lift lines grow. And now, with [COVID-19] and the reservation systems, we are seeing many people deciding that this is the year to get into touring.”

Ski resorts haven’t missed the mark on this surge, either. According to Chris Linsmayer, the public affairs director for Colorado Ski Country USA, almost every ski area in Colorado offers some sort of uphill policy, and some even rent AT-specific equipment.

“This trend has really developed and taken off during the last five years or so,” Linsmayer told TPG in an email. “That has evolved from a smaller audience [and] number of participants and a smaller number of ski areas offering uphilling to now almost every ski area in Colorado offering it in some capacity.”

Many, but not all, resorts require some sort of pass or ticket, which can range from $10 to $150, depending on whether you’re looking for a day ticket or season pass — significantly less than the $200 or more that some resorts charge for a daily lift ticket.

Each resort nationwide has different uphill policies. Some, like Buttermilk and Aspen Highlands, allow visitors to skin on specific uphill routes during operating hours, while others, like many Vail Resorts other than Whistler, only allow skinning outside of operating hours. Of the Vail resorts that do have an uphill policy (Big Boulder, Jack Frost, Attitash, Stowe, Northstar and Vail's Midwest resorts don’t allow uphilling), no fee is required.

In Aspen, in-bounds alpine touring is part of the culture. The Cliffhouse Restaurant, which is perched at the summit of Buttermilk Mountain, even hosts a special “Friday Morning Uphill Breakfast Club,” where skiers can reward themselves with a hot cup of coffee and breakfast after their hike to the summit.

The increasing popularity of alpine touring has even resulted in the opening of the nation's first liftless ski resort — Bluebird Backcountry. The resort, which fully opened for the 2020 to 2021 ski season, offers all the signage, safety precautions and amenities of a traditional resort with no lifts or gondolas. The resort even offers guided tours and rents AT gear.

According to John Plack, the senior communications manager for Vail and Beaver Creek, skyrocketing interest in uphilling led to the release of uphill-specific trail maps and information guides for the two resorts for the season. These maps help highlight designated uphill routes to help keep people safe from any operational work, such as snowmaking and grooming, that may be taking place on the mountain.

And the rise of uphilling isn't exclusive to resorts out West.

For the past four years, Black Mountain, located in the small town of Jackson, New Hampshire, has hosted an uphill series called “Friday Night Lights.” The event is organized by Andrew Drummond, a local ski mountaineer and owner of the Ski The Whites ski shop. Every Friday evening during the season, groups of skiers pay $10 to race uphill and ski down. While it can be competitive, many skiers simply show up for the exercise and camaraderie.

Come April, the mountain shuts off the lifts for a weekend to host an event called the Wild Corn Shindig, organized by Granite Backcountry Alliance, which works to expand off-piste ski terrain in the region. During the event, the only way to access the top of the mountain is by skinning. Participants can try AT setups, enjoy food and live music, and participate in a variety of games and events.

While uphilling at resorts has been gaining traction, it's only part of the picture.

Many skiers are purchasing AT setups so they can access out-of-bounds, or backcountry, terrain — far from lift lines and any sign of civilization. But with this comes an entirely new set of hazards that require an advanced skill set. In the backcountry, there is no ski patrol to come to the rescue if there's an accident, there are no groomed trails or signage denoting difficulty levels of the terrain and there is no avalanche mitigation.

Because of this, some uphillers choose to stick strictly to the resorts, while others only venture into the backcountry when conditions are ideal.

And there are others who skin at resorts to access “sidecountry” terrain, which is essentially backcountry terrain accessible from a ski resort.

Touring at resorts is also a great way to get comfortable with AT gear and skinning in a controlled environment, rather than trying it for your first time in the backcountry. For people who do plan on eventually taking their new skills into the backcountry, hiring a guide to help with terrain management and keep you safe is a must. Local ski shops can often help connect skiers with guides in the area.

Either way, this movement has clearly spawned a new wave of skiers and outdoor enthusiasts who refuse to take the easy way up, and it isn’t going anywhere any time soon.

“[Alpine touring] is not about going to prove ourselves in the backcountry or pushing our limits,” said Vest Burton from the Aspen Ski Company. “You get to the top and you feel like you’re really in the mountains. It’s part of our culture and community here. It’s part of who we are.”

Featured image by Getty Images/Cavan Images RF
Editorial disclaimer: Opinions expressed here are the author’s alone, not those of any bank, credit card issuer, airline or hotel chain, and have not been reviewed, approved or otherwise endorsed by any of these entities.